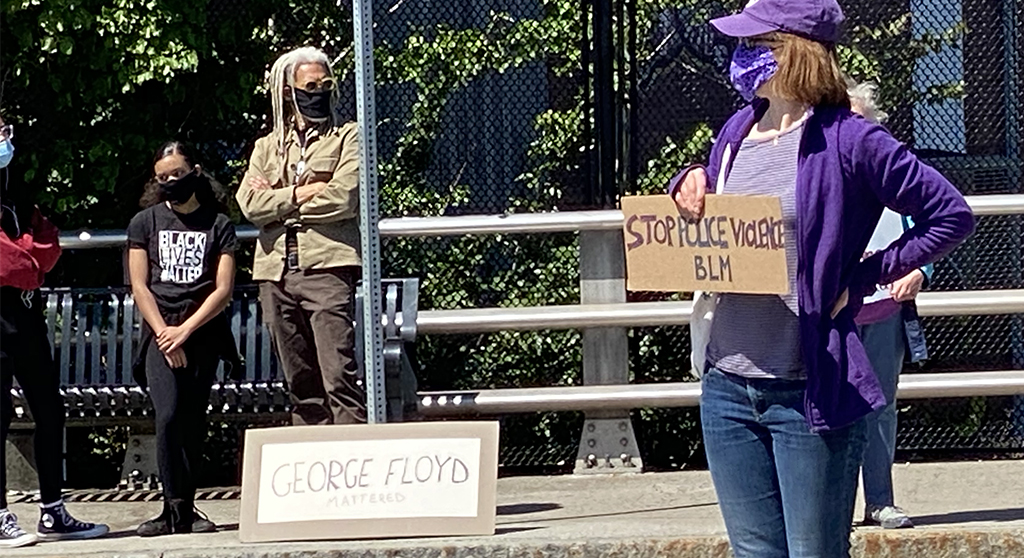 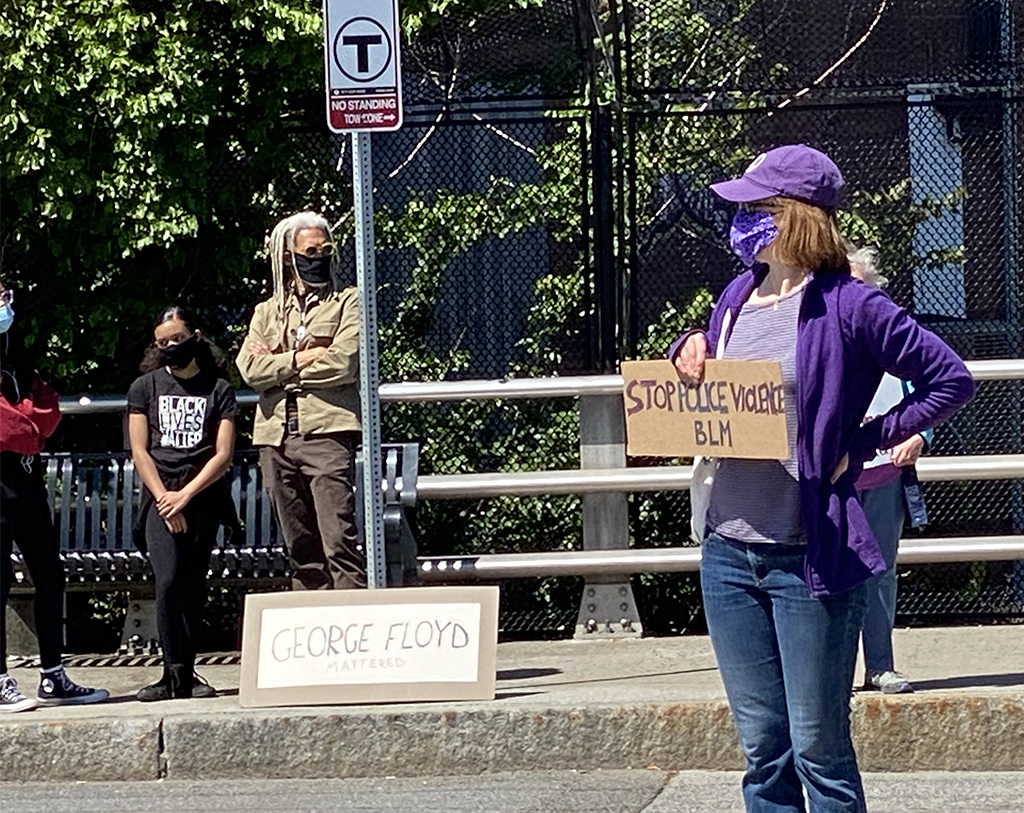 People take part in a “Stand Out Against Racism” rally Sunday. More events are planned for this weekend. (Photo: Tom Meek)

A peaceful protest against police brutality is planned for noon to 2 p.m. Sunday on Cambridge Common.

Called “The Movement Continues,” the protest has been put together over the past week by activists of color and the My Brother’s Keeper Task Force in consultation with police and the offices of the mayor and city manager, said co-organizer Niko Emack, a former communication and community engagement liaison for the Mayor’s Office under Marc McGovern.

“It’s time we come together and take a stand against injustice,” Emack said, urging people – especially student activists and community leaders – to come to “elevate your voice and speak truth to power.”

Other events leading up to the protest are being promoted by a North Cambridge Democrats group called Stand Out Against Racism. The 10 a.m. Saturday “stand outs” are planned for Rindge Avenue at Alewife; Porter Square; Inman Square; Central Square; and Davis Square in Somerville. There are already growing vigils from 6:30 to 7:30 p.m. stretching from Porter Square toward Harvard Square on Massachusetts Avenue.

While tens of thousands of protesters have thronged the streets of Boston over the past several nights, often clashing with police after peaceful rallies, there have been fewer and far quieter actions in Cambridge following the latest deaths of black people at the hands of law enforcement nationwide.

There was a “very small, peaceful protest” at Massachusetts Avenue and Hollis, North Cambridge on Saturday morning, followed by a protest of 100 or more people in Porter Square the next day, said Jeremy Warnick, director of communications and media relations for Cambridge police. On Monday, city officials held a 45-minute online vigil before the City Council meeting, while a youth rally called “We’re Still Breathing” that had been planned for 4 to 6 p.m. Monday in Hoyt Field, Riverside, was canceled after Sunday’s violence. 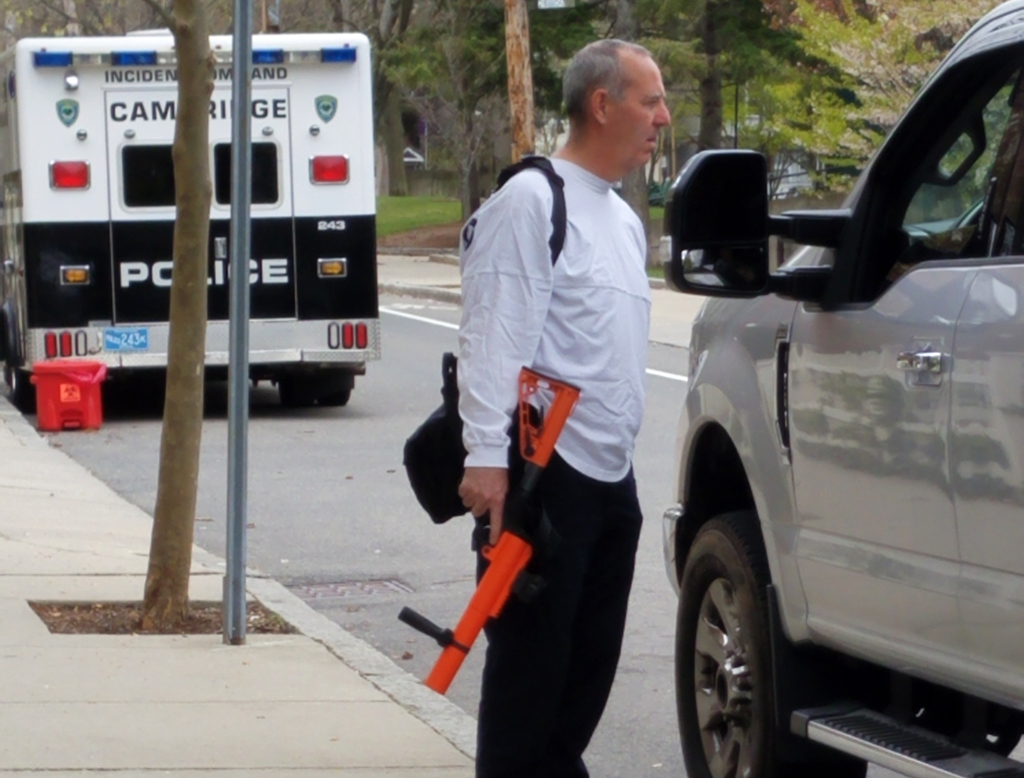 Cambridge police have taken pains to appear as allies in the unrest over black deaths. Commissioner Branville G. Bard Jr., who is black, wrote in a published op-ed that the Memorial Day death of George Floyd, a Minneapolis man whose name has been invoked most loudly as the inspiration behind the protests, was “depraved, indifferent, senseless – and to be clear, it was an unlawful killing.” Superintendent Christine Elow, another black leader, spoke during the online vigil and was interviewed Wednesday on “The Yoftahe Show” on Facebook Live.

But the department and its role are getting more scrutiny. After Bard told city councillors that the department’s use-of-force policies were all available on the department’s website, residents noticed that officer’s actions didn’t always match up with the policies. While a policy on nonlethal weapons allowed for officers includes only pepper spray and a baton, as recently as April 26 a police supervisor was photographed outside the War Memorial Recreation Center homeless center with a gun that fires rubber bullets.

On Friday, four additional policy documents – including one that covers “specialty impact weapons” such as guns that fire rubber bullets – were posted by police online alongside the other policies.

Only after the police budget was examined by the council’s Finance Committee, though, did it get a hard look by citizens. Resident Jae Storozum used a Twitter account to present findings gleaned from the city’s open government data portal about the force’s $63 million budget, finding that 52 percent is spent paying for patrols, or $33.2 million, while 8 percent, or $4.8 million, is spent on “family and social justice” issues. “CPD spends nearly seven times on patrolling than it does social justice, and I think that tells you everything you need to know,” Storozum said. “If Cambridge is really serious about restorative justice, they need to put their money where their mouth is and reallocate funds accordingly.”

The finding that about $10,000 was spent per reported crime last year, most of which were bike thefts, prompted an acerbic online quip from activist Christopher Schmidt – “Just buy anyone whose bike was stolen a new bike and save money” – and a surprised reaction from councillor Patty Nolan: “Wow. Where was this analysis yesterday when we discussed the police department budget?”

Storozum said Friday that “since I got kind of a large response on Twitter, I’ve been working with other activists on an open letter in the vein [of one distributed about Somerville police]. We’re fine-tuning language and the ask that we’re making, and looking for more input from black leaders.” Storozum urged black activists to be in touch via the same Twitter account with the posted budget findings, under the handle “@MbtaJae.”

Councillors are moving forward with two police-focused orders Monday, including one calling for shifting the upcoming $4.1 million police budget increase to public health and safety measures. Sponsors Jivan Sobrinho-Wheeler and Quinton Zondervan want the council go on record supporting a the upcoming budget “only if it includes a significant reallocation of funds.”

Another group of councillors – McGovern and E. Denise Simmons as well as Mayor Sumbul Siddiqui and vice mayor Alanna Mallon – want a hearing to discuss use of body cameras by city officers. Mallon has spoken out separately about reforming the citizen Police Review & Advisory Board and looked at whether current police policies encompass the national “8 Can’t Wait” reform proposals, identifying areas that need more examination locally.

“We have a lot of work to do as a community to ensure our policing policies protect and serve our residents,” Mallon said. 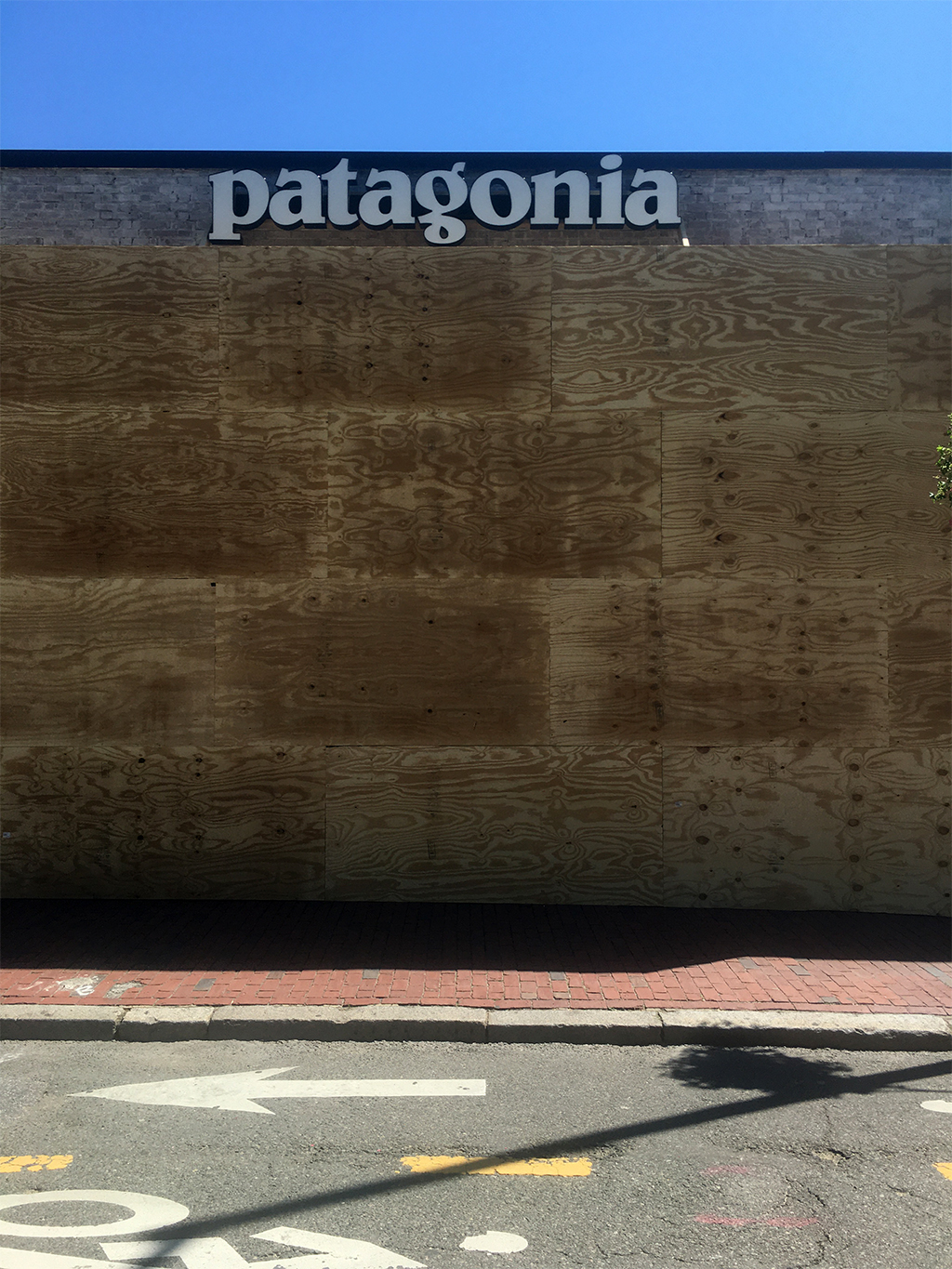 The Patagonia store at 39 Brattle St. has all but disappeared behind plywood in Harvard Square. (Photo: Gus Rancatore)

Some property damage and reports of looting accompanied the Boston protests, and some shops in Cambridge – primarily in Harvard Square – have boarded up their windows as though in preparation, despite the lack of apparent threat.

Still, police listed two recent commercial break-ins and one “possible” attempted commercial break-in, all taking place Monday, as being potential examples of protest-related looting. They included a 1:38 a.m. incident at the Cambridgeside Place Best Buy, where a window was smashed, several thousands of dollars in electronics stolen and display cases and mounts damaged; and a 10:08 p.m. smashed window and scattered tobacco products at the Bluemoon Smoke Shop in Central Square. Officers saw “possible damage” to the front door of a Broadway restaurant at 11:22 p.m., “but it did not appear any entry was gained,” Warnick said.

Local business owners have discussed at least one more possible example of protest-related damaged to a business, at a Sunoco gas station.