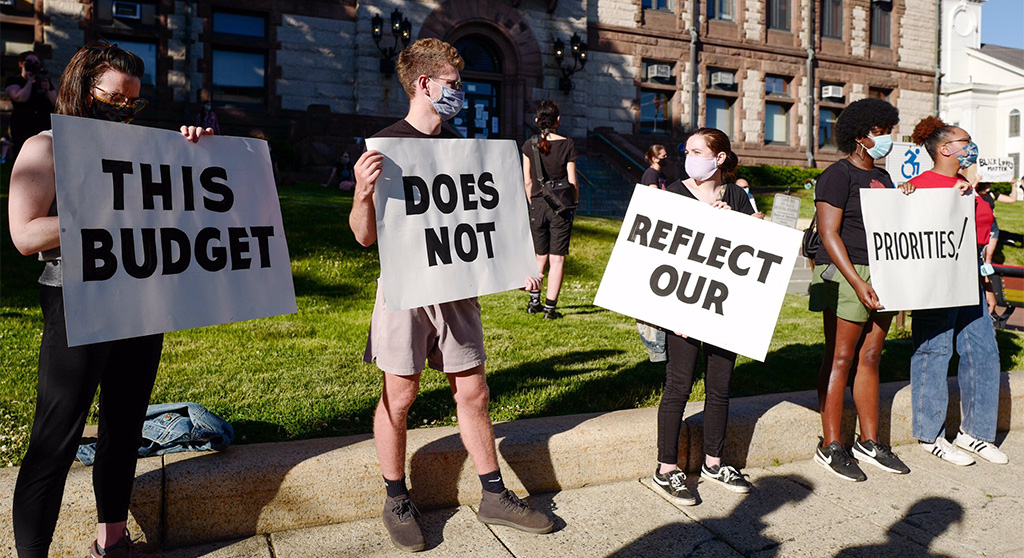 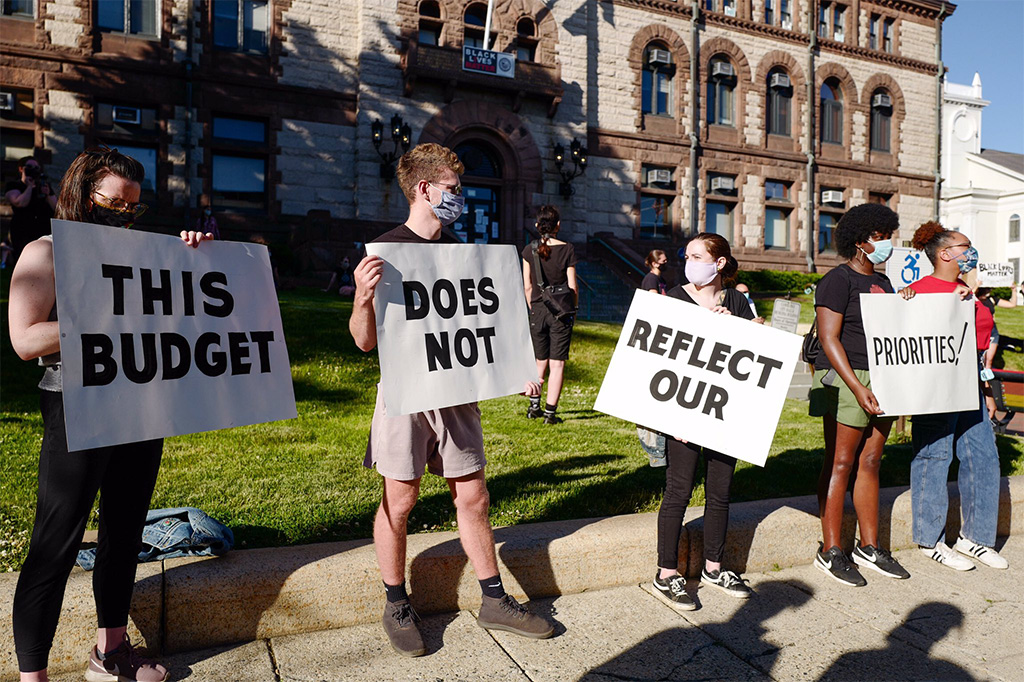 A protest for defunding the Cambridge Police Department is held at City Hall on Monday before a virtual City Council meeting. (Photo: Luis Cotto via Twitter)

Nearly 400 residents signed up for public comment at Monday’s meeting of the City Council, nearly all seeking to speak on an order for redirecting a $4.1 million police budget increase toward public health and safety measures – a nod to a nationwide call to defund police departments – and nearly all in favor.

At the usual three minutes per person, public comment would have lasted for 20 hours; even cutting the allowed time to one minute per person, councillors sat listening until around 10:20 p.m. Mayor Sumbul Siddiqui said at the start of the 5:30 p.m. meeting that the entire night would be devoted to it, with a special meeting called for 5:30 p.m. Wednesday for councillors to get through the agenda. There will be no public comment Wednesday.

A significant number of public speakers said they wanted a diversion of the $4.1 million to be just the start, with the department ultimately defunded and abolished.

The commenters were notably younger than those in the typical council meeting and first-timers, due either to the topic, a democratizing side effect of being able to call in from home instead of waiting in Sullivan Chamber, or both. Several took the opportunity to also support the return of an affordable housing overlay zoning proposal.

The city’s police force includes 329 full-time employees and proposed funding of $66 million. Crime reached a 55-year low last year, for 2,257 serious incidents, according to data in the submitted city budget expected to get an adoption vote June 15.

But the city was expecting to see less revenue overall because of the coronavirus shutdown and “to delay the hiring of new positions, including in the Human Services and Community Development departments,” noted the order’s authors, councillors Jivan Sobrinho-Wheeler and Quinton Zondervan, calling for less use of policing “as a response to our city’s problems” and more addressing of human services issues relating to poverty, health care and education that cause the problems.

The calls to defund came despite an announcement of a general order from police commissioner Branville G. Bard Jr. on officers’ “duty to intervene” – a reaction to the protests taking place nightly across the United States since the Memorial Day killing of George Floyd in Minneapolis.

The order, signaled by Bard at a Sunday protest on Cambridge Common and announced at 3:14 p.m. Monday, requires “all sworn members of the Cambridge Police Department present at any scene where physical force is being applied to either stop or attempt to stop another member of the department when force is being unreasonably applied or is no longer required.”

The order was effective immediately.

Before it was issued, officers were obligated only to report use-of-force violations to a superior officer, Bard said. “Over the last two weeks, we have closely scrutinized our policies and procedures in light of the various reform measures that are being proposed around the country … While we feel that most, if not all, of our policies directly align with the spirit of what is being asked for, [this was] an area where we felt we could be more explicit.”

The order got little notice Monday either during the virtual City Council meeting or at an in-person protest held at City Hall in the half-hour before, when a few dozen people gathered to call for reform.

Several comments Monday referred to the public arrest of a 21-year-old Harvard student in April 2018 after he took drugs and appeared naked and aggressive on a Massachusetts Avenue traffic median. An officer punched the student five times in the torso during a struggle to get him handcuffed; through reviews found police “acted appropriately,” some called it a time mental health professionals should have been called in, rather than police.

Erin Perez, who has worked as a caseworker in Central Square, reporting seeing “firsthand how [an] insidious falsely benevolent police presence functions in a place like Cambridge … When the police are dispatched on a call that involves a mental health crisis or substance abuse emergency, homeless individuals, folks who have criminal records or any vulnerable persons, the police are intercepting [where there should be] social services first responders and community-led initiatives.”

“I got to know and care for folks who served their time in prisons and jails only to come out and be denied housing, work, adequate substance abuse treatment and dignity, all because of previous interactions with police,” Perez said.

A Cambridge Health Alliance psychiatry resident named Andy Hyatt said he had “fear for my black patients every time they interact with the police,” and Jay Morgan, who does homeless outreach in Cambridge, said his clients “all live in fear and terror of the police department.”

It was also a night for more general simmering resentments and fears to be made explicit, with many speakers suggesting the degree to which the police department had failed to set itself apart from forces in cities around the nation who harass and endanger people of color.

“As a black man, whenever I see an armed police officer, I fear for my life. Every single time I look at that gun, look at the officer and I think, ‘Okay, what am I going to do if he looks at me and has some thought about me?’ I practice in my mind what I’m going to say,” Charles Franklin said.

“My family has never seen the police as someone they can rely on. You do not feel safe around them,” said one young Washington Street resident. Tamara Harper, of Washburn Avenue, said she’d seen “a black man have a mental health episode just two days ago. I called [a social services organization and] Cambridge Health Alliance to see if there was any way that this person could get served without calling 911. There was not,” Harper said. “I did not call 911.”

There were also voices in favor of keeping the police funding where it was.

Valerie Bonds saw the calls to defund as a “white ally, John Brown misguided attempt to affect change in a system that was created by the Supreme Court, past presidents and our legislators.”

Like commissioner Bard, Bonds credited the force as already having productive programs in place and ways to stop excessive use of force, and she said the defunding “is not going to get rid of systemic racism.”

Nor is defunding the $4.1 million mentioned in the order practical, councillor Marc McGovern said in an email to constituents. More than $2.5 million of it goes to salary and wages that the city is legally obligated to pay, and some goes to training and cadet programs that are meant to increase diversity and ensure that young officers are instilled with Cambridge values. The full budget calls for $258,250 in cuts from the commissioner’s office and another $352,400 in cuts from the Criminal Investigations, Special Investigations and Tactical units.

“If the reduction means that we will close our policy academy, stop our cadet program and end the Office of Procedural Justice, then I wouldn’t support it,” McGovern said. “If the reduction comes from eliminating militarized equipment and other areas that run counter to community policing, then that is different.”