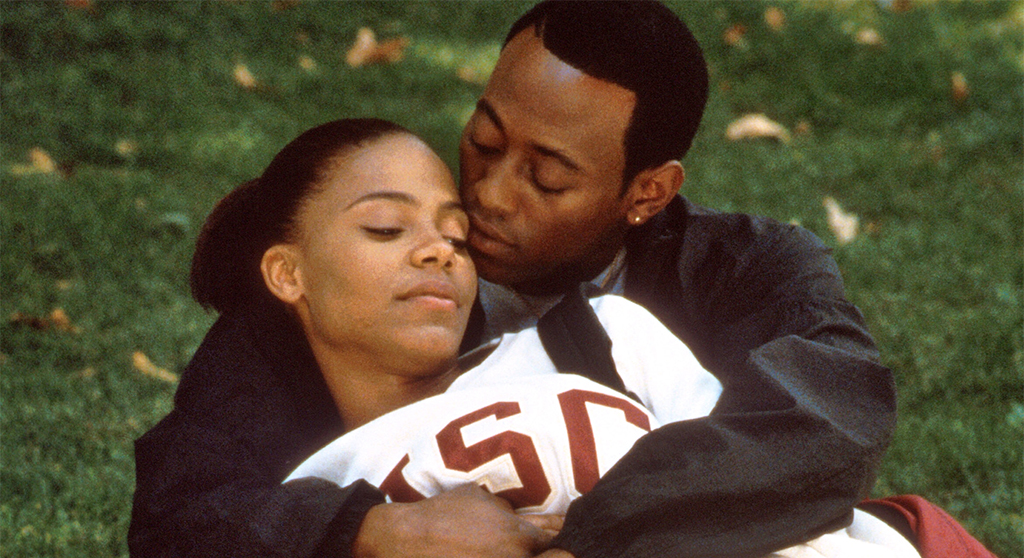 Gina Prince-Bythewood’s fantastic directorial debut, which I had the opportunity and privilege to catch while at the Sundance Film Festival. The film revolves around two exceptional basketball talents, Monica (Sanaa Lathan) and Quincy (Omar Epps), whose careers and love for each other ebbs and flows over the years, often with the former detracting from the latter. The film, produced by Spike Lee, is also about race, opportunity and class. The impressive cast includes Dennis Haysbert, Debbi Morgan, Regina Hall and Alfre Woodard, and Prince-Bythewood gets deep into the heartaches and triumphs of her main characters as time and events change and shape them – something her latest endeavor, “The Old Guard” needed more of.

After nailing an Oscar with “Moonlight” (2016) director Barry Jenkins followed up with this soulful adaptation of a James Baldwin novel that, like “Love and Basketball,” builds around young love. But it also details the helplessness of a person of color snared inside a rigged justice system, where getting a rap – whether you did it or not – is simply part of the process. The film’s something of a two-step, evolving from the nuanced predicament of a young couple challenged by an unplanned pregnancy to the horror of American injustice. Regina King won a Best Supporting Actress Oscar for her part as the mother of the one of the young lovers (KiKi Layne, “The Old Guard”) while Stephan James is the other, put in jail cell for a crime he did not commit. (Read the full review from Dec. 24, 2018.)

Steve McQueen directs this depiction of American shame and inequity by telling the ordeal of Solomon Northup (Chiwetel Ejiofor), a free black man in antebellum upstate New York who one day has a drink with two traveling performers and wakes up in chains. Unconscionable and impossible, you might say, but this really happened. Through Northup we live as a slave, experiencing hate and abuse deeper and more bloody red than painted in most history books. McQueen doesn’t preach; the experience speaks for itself. The film rightly won the Best Picture Oscar (nominated for nine overall, with Ejiofor nominated for Best Actor). The cast includes Brad Pitt, a producer on the film, and Michael Fassbender (also nominated, for Best Supporting Actor) and Lupita Nyong’o in her breakout. It won her a Best Supporting statue. (Read the full review from Oct. 25, 2013.)

If you dig Charlize Theron, spy thrillers and ’80s music, you’re locked and loaded with this sleek, hip actioner from stunt performer-turned-director David Leitch. Turn back the clock to the Cold War, cue up Nina Hagen and watch Theron go atomic as the blonde British agent of the title trying to get a package across the Berlin Wall. The perfectly choreographed fight sequences and “Bourne”-esque pacing engage, but it’s all about Theron, who’s ready to throw down, dazzle at a ball or seduce an asset. In short, she’s the female James Bond, and just as much fun to drink in. (Read the full review from July 27, 2017.)

Remember when the prospect of a female president was almost a thing? Well, here comes Theron as Charolette Field, a secretary of state looking to run for president when the current POTUS (Bob Odenkirk) steps down to do a TV series. Yes it’s a comedy, and one Theron totally revels in, paired with Seth Rogan as a geeky journo turned speechwriter turned love interest and spanking the monkey Internet sensation. It’s wacky good fun, with Andy Serkis as a Rupert Murdoch-styled tycoon and O’Shea Jackson Jr. scene-grabbing as Rogen’s bestie and a closeted GOP pragmatist. (Read the full review from May 2, 2019.) 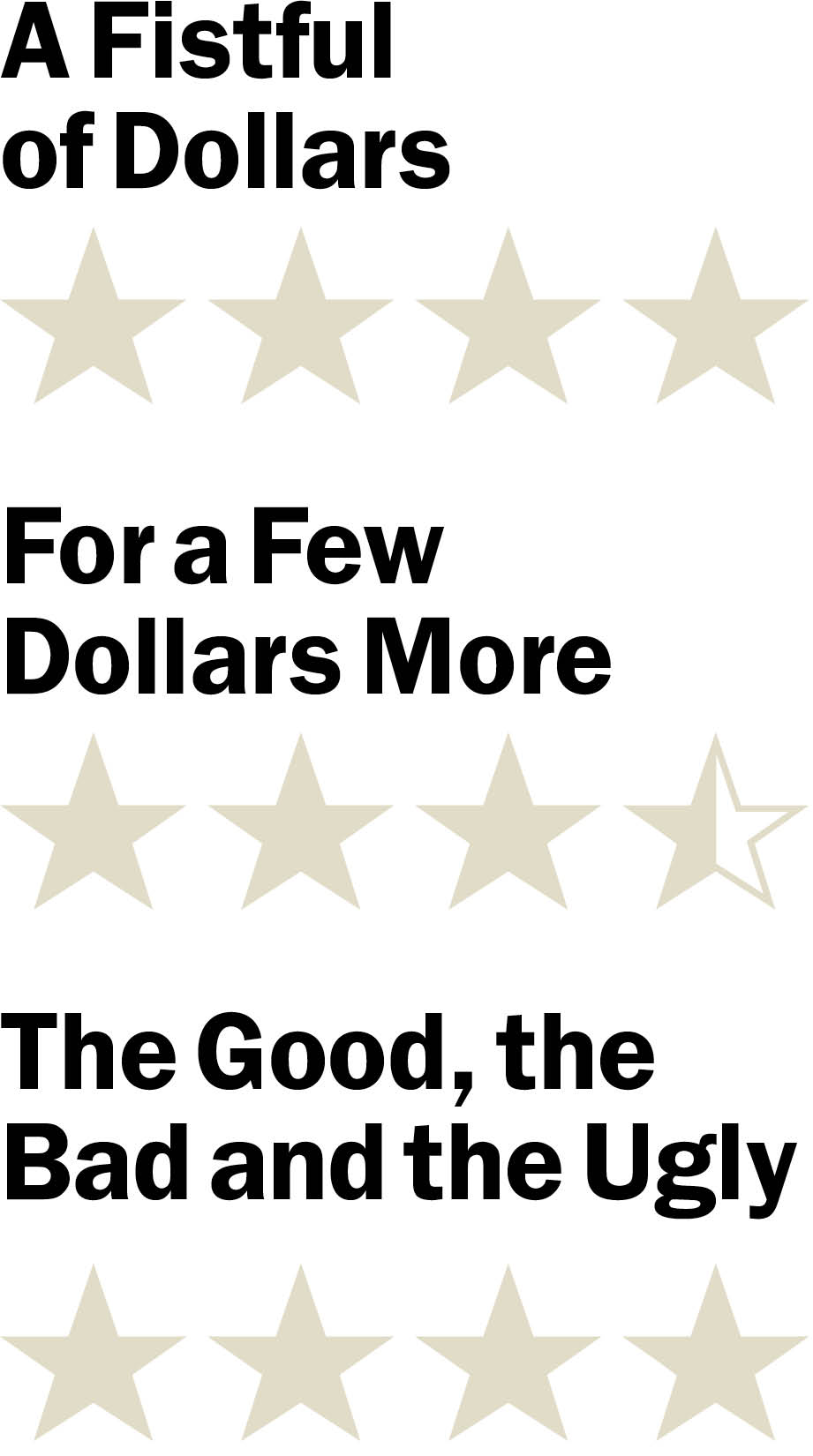 Last week the cinema world lost a giant when Italian film composer Ennio Morricone passed away. For decades his scores not only accented films but defined them, and none more than this indelible antihero trilogy that began with “A Fistful of Dollars” (1964), a geographical transposition of Akira Kurosawa’s “Yojimbo” (1961), and concluded with “The Good, the Bad and the Ugly” (1966) with “For a Few Dollars More” (1965) in the middle. The films, directed by Sergio Leone, defined the the Spaghetti Western genre (filmed on the plains of Spain and Milan and dubbed after shooting) and made Clint Eastwood a household name. Let’s not forget Eli Wallach, Gian Maria Volonté and Lee Van Cleef who, as varying incarnations in chapters embodied the good, the bad and the ugly of the whole morally gray west world. Of course I would not be typing this if the films lacked Morricone’s touch, most notably the timeless and often copied. “Ecstasy of Gold.”

Another film that might not have succeeded as it did without its Morricone score. The film, about Jesuit missionaries trying to protect a South American tribe from colonial enslavement by Portugal, is relevant today on so many levels it needs no articulation. It would make an intriguing serial watch with the Marlon Brando-Gillo Pontecorvo collaboration “Burn!” (1969) and Martin Scorsese’s challenge of faith epic, “Silence” (2016). The thespian A-list includes Robert De Niro, Jeremy Irons and Liam Neeson. The film garnered seven Oscar nods, including Best Picture and for Morricone’s composition. Only Chris Menges’ camerawork would net a statue, and the film remains an astounding visual experience that becomes transcendent when coupled with the maestro’s emotionally evocative score.

Morricone was again nominated on this collaboration with Brian De Palma, working from a script by David Mamet about the vicious cat and mouse games between Al Capone (De Niro again) and the righteous Elliot Ness (Kevin Costner, an up and comer then). De Palma’s last real commercial and critically acclaimed effort, underscored with loving homage (there’s usually a Hitchcock shoutout in his films) to the “Odessa Steps” scene from Sergei Eisenstein’s eternal masterpiece “Battleship Potemkin” (1925). Morricone’s tension-building beats, along with some fine editing, help elongate the scene. The film would get four Oscar nods, with Bond actor Sean Connery picking up a Best Actor statue for his portrait of one of Ness’ tough T-men.

Morricone would finally score an Oscar for this collaboration with Quentin Tarantino, who’s forever been paying homage to the Spaghetti Western. Here he actually tries one – kind of. The film, about a bunch of desperados (QT regulars Michael Madsen, Kurt Russell and of course, Samuel L. Jackson) holed up in a snowbound haberdashery, feels like a western reworking of “Reservoir Dogs” (1992).What’s notable about the film is that Tarantino and cinematographer Robert Richardson shot not only on celluloid (few do these days) but using a Panavision format unused for 40 years. Tarantino also insisted on showing the film on old-school film projectors, of which there were maybe a dozen theaters in the country that could handle it (two here in Boston); projectors had to be dug up, repaired and shipped out for the release. It is a stunning film to look at on the big screen (and did get a cinematog nod), though there are few outside shots that highlight the effort to its full effect.

Filmed in Truro, this offseason getaway gone bad begins as pair of college hotties (Noah Le Gros and Liana Liberato) drop in on dad’s prized possession of the title – which they expect to be empty (Truro’s population in the offseason is pretty sparse), but instead holds a pair of quirky older guests (Jake Weber and Maryann Nagel). They’re a bit freaky, but the real creepiness comes in the jellyfish type pods washing up on the shore and that choking fog. “Beach House” pretty much is a home invasion psychodrama that morphs into low-bar John Carpenter territory (“The Fog”). Think “Color Out of Space” (2020) sans Nic Cage.