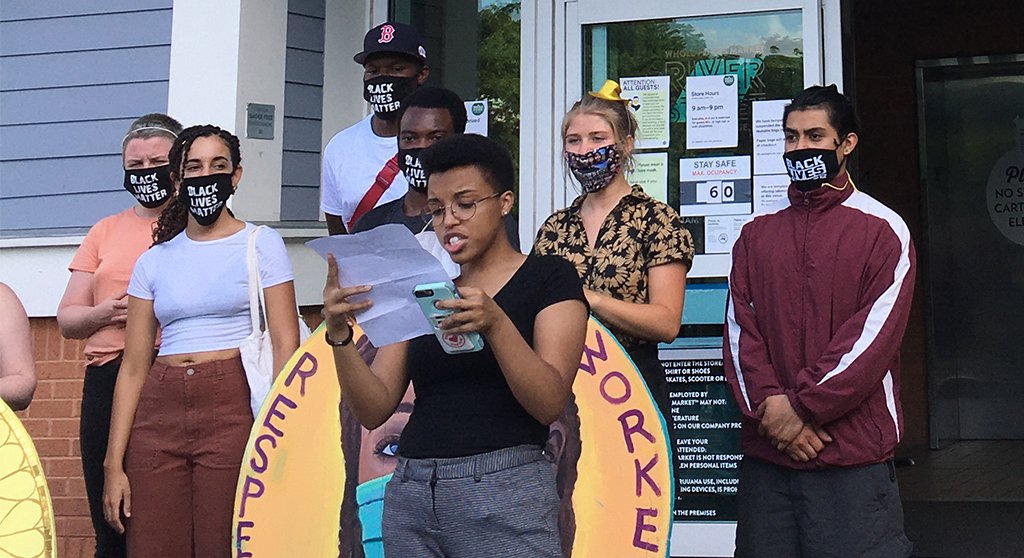 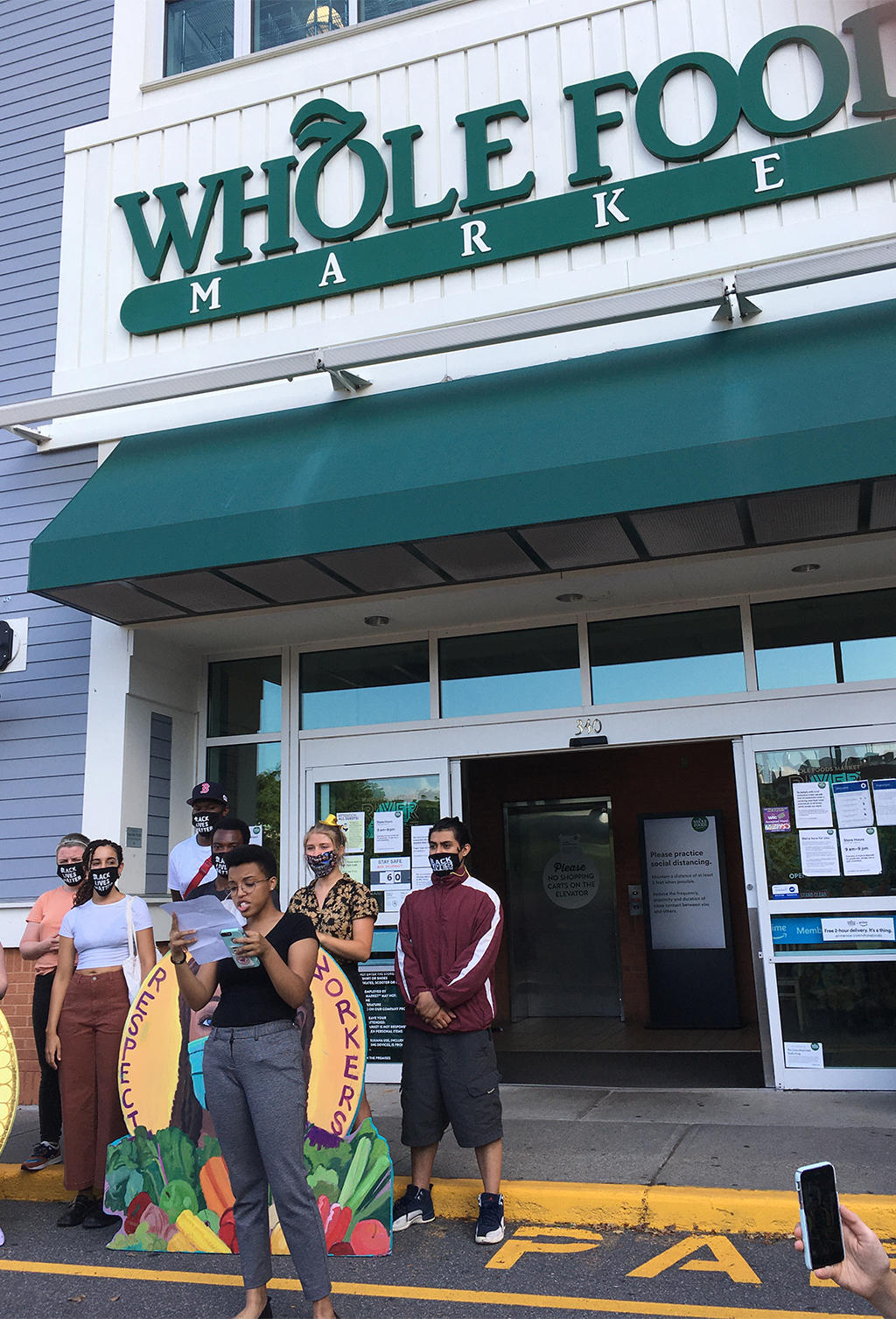 Marking the 18th day that the Cambridgeport Whole Foods Market grocery store has sent employees home rather than allow them to wear masks that say “Black Lives Matter,” 11 workers walked out Saturday at about 5:30 p.m. and were joined by a crowd of protesters in front of the store for their now-daily rally. The Whole Foods managers maintain that the masks violate the store’s dress code.

“This is the largest crowd I think I’ve seen here,” said city councillor Marc McGovern of the more than 100 protesters, among them several members of the Honk! band playing from a safe distance. “It’s great that [Whole Foods and Amazon owner] Mr. Bezos gave $10 million to [organizations supporting] Black Lives Matter, but let’s face it, he made that money back before signing the check,” he said of Bezos’ June 3 announcement.

McGovern was joined by vice mayor Alanna Mallon and Mayor Sumbul Siddiqui, who thanked the workers repeatedly for staging the daily protests. “This is all about meaning what you say,” she said of Whole Foods, which posts on prominently on its website that “Racism has no place here … We support the Black community and meaningful change in the world.” 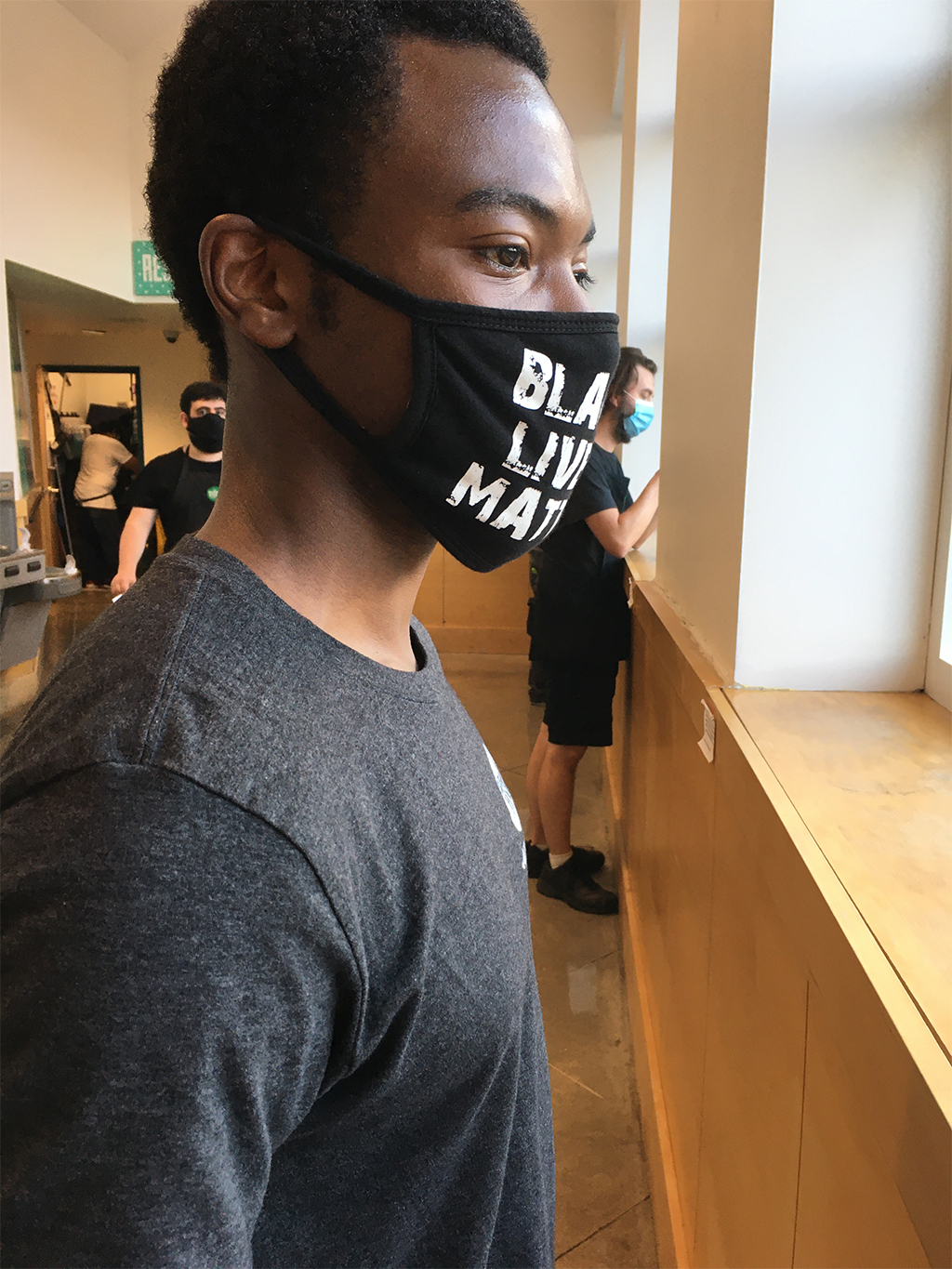 Whole Foods employee Suverino Frith at the store’s second-floor window Saturday, minutes before being asked to leave work and joining the protest below. (Photo: Jean Cummings)

“We have talked to the regional [office],” Siddiqui said, “we’ve reached out to these managers here, and until we get an answer we will keep trying.” Referring to fellow city councillors who have attended over the past two weeks, she added, “we will keep doing this until there’s change.”

Employee Savannah Kinzer, who spearheaded the actions and was visibly moved by the support from the growing crowd, announced the employees’ five demands: freedom for all Whole Foods employees to specifically support black and marginalized lives; back pay for the lost time for protests; the revoking of all demerits for wearing the BLM masks; reinstating hazard pay, which was revoked on June 24 – “because I don’t think the pandemic is over” – with the ability to raise such issues at work without repercussion; and to make the racial demographics of Whole Foods employment accessible to the public and to make management more diverse. 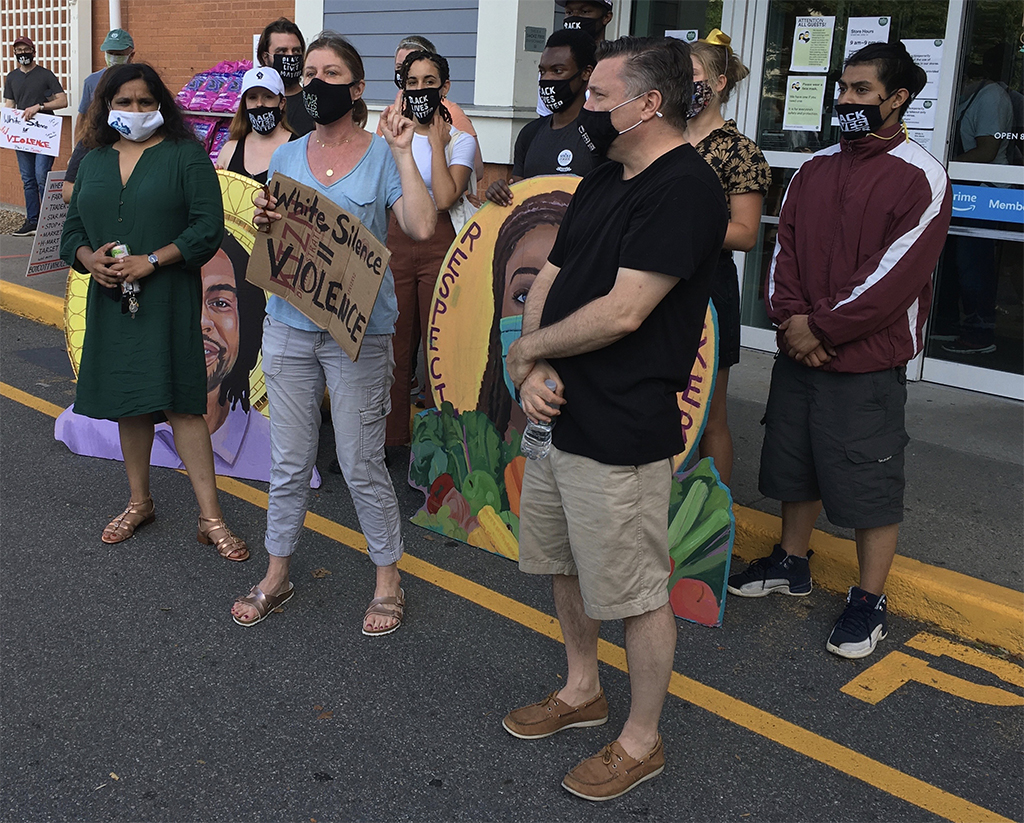 On June 24, managers at the 340 River St. store told workers wearing BLM masks that they had to take them off or leave work. For each offense, a worker gets a demerit. Several workers chose to leave, and several took to Twitter to explain why they had walked out.

Since then, each day several workers put on Black Lives Matter masks, go to work – and leave for the day rather than remove the masks at management’s request.

Some are getting close to being fired, triggered by reaching a predetermined maximum of demerits for each walkout. Kinzer said Saturday that she is three infractions away from being fired.

But she and the young employees who are taking these daily actions are fighting for all of their colleagues, Kinzer said. Many of them have children, she said, and don’t have the luxury of walking away from their pay. “Out of this, we are building a stronger community,” she said. She thanked the protesters for the moral support, the art and music, and for bringing them food. She said a GoFundMe page has raised $8,000 so far to support lost wages. 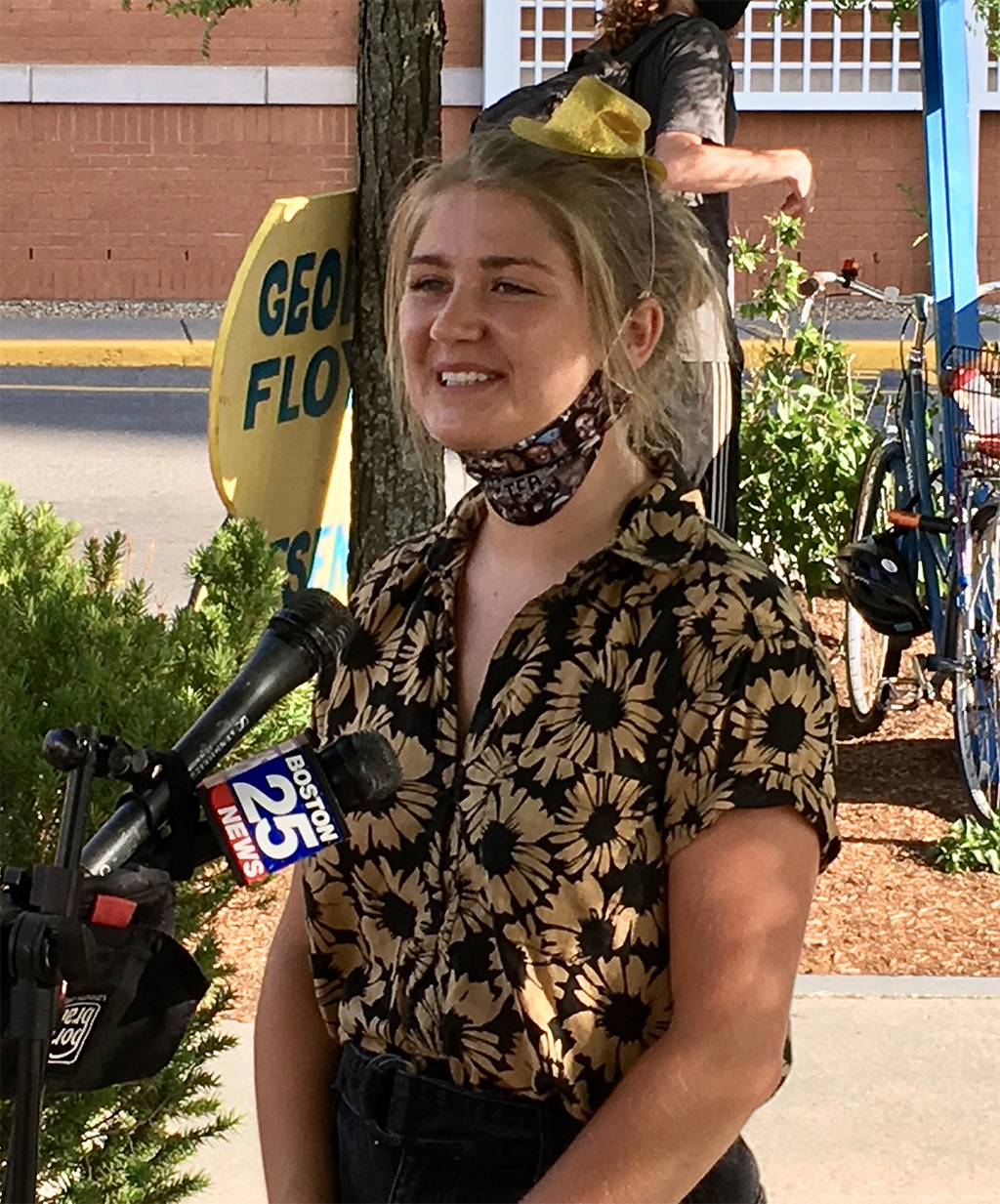 Whole Foods managers have released statements saying that all team members “have to comply with our long-standing company dress code, which prohibits clothing with visible slogans, messages, logos or advertising that are not company related.”

Employee Kinzer had worn a “Soup is Good” mask earlier that week before she was first asked to leave because of the BLM mask, and it passed unnoticed by managers. Employees regularly wear shirts, hats and pins that have non-Whole Foods messages, including various sports team logos, many staff said.

“They say it is all about the dress code,” said employee Suverino Frith at the Saturday rally, “that they are simply defending their dress code. But it has been very relaxed.” In addition to sports paraphernalia, staff have been able to wear LGBTQ pins, he pointed out. “They will donate to BLM,” he said, “but if the first thing walking into the store you see is ‘Black Lives Matter,’ they say, ‘No, that’s bad for business.’”

“They are afraid that it will turn away customers,” Suverino continued to the crowd, to vocal support. “Afraid that it will be bad for business. But now they see that not only do team members not support their decision not to support the black community, but their customers don’t support it either … Instead, I would have liked to see Whole Foods embodying their values of inclusivity, diversity and support for marginalized communities.”

Cambridge resident and Whole Foods employee Yaxeny Colon, who also was sent home June 24 and several days since, said she has been especially disappointed because she was drawn to work at Whole Foods “because they seemed like they were all about community and all about doing the right thing and supporting their employees.” She even left her previous job to come to Whole Foods to seek a company that “stood by their values. I expected more from a company I admire.”

Impact on the store 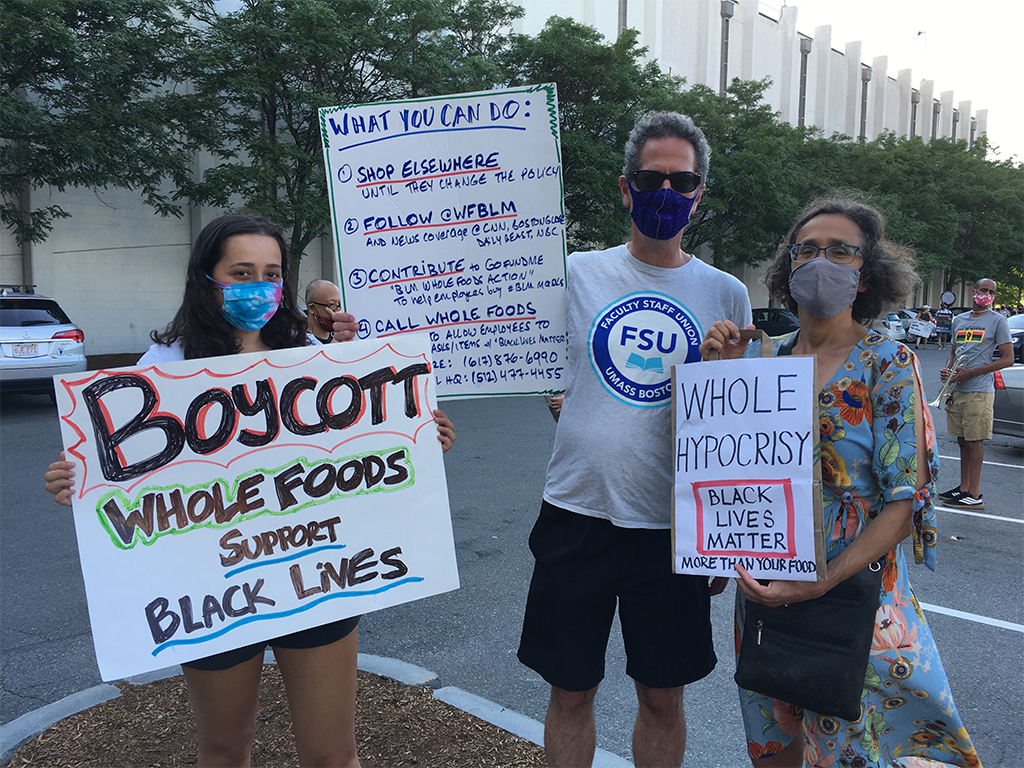 The protesters say they have had an impact, each night, turning away potential shoppers.

On Tuesday, state Rep. Mike Connolly joined several local state-level politicians for the protest. Connolly told Cambridge Day that he saw protesters get “dozens of folks to turn around … I also am pleased to report that I managed to talk some would-be customers out of going in to shop” himself. Connolly has been joined by state Sens. Sal DiDomenico, Joe Boncore and Pat Jehlen, and fellow state Reps. Dave Rogers and Jay Livingstone in “standing in solidarity with…these courageous and principled frontline workers … putting their livelihoods on the line to help make Black Lives Matter in their workplace,” Connolly said.

Colon, and fellow employees Corey and Faith, said Saturday that they had noticed a distinct drop-off in customers at the store – especially during the 5:30 to 6:30 p.m. rallies, but also during other times. 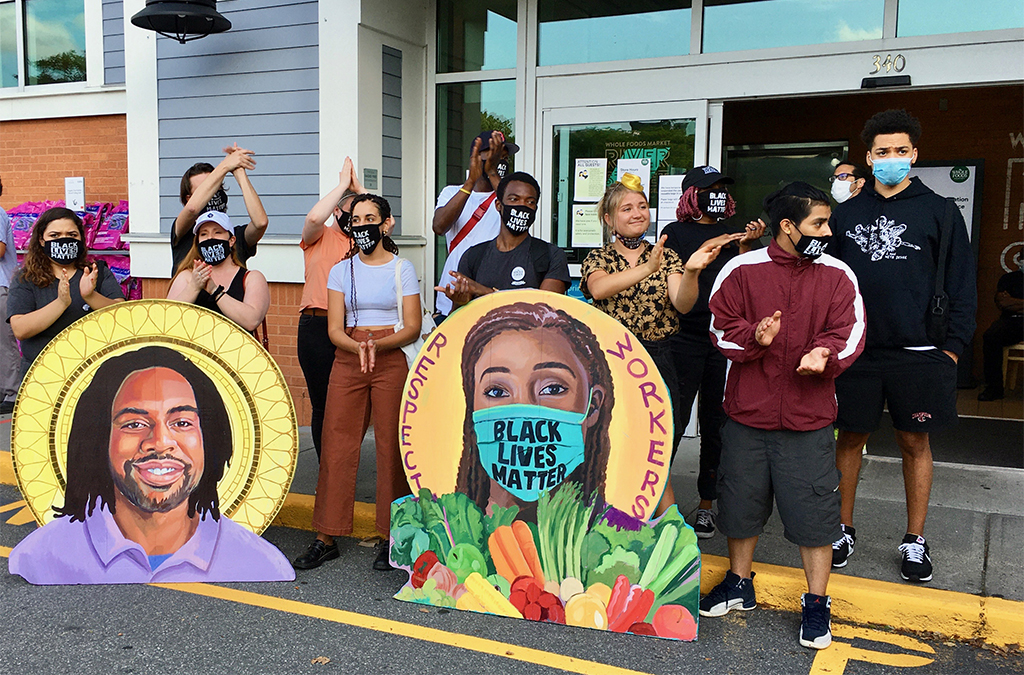 Idle cashiers were the norm in the store during Saturday’s rally, and only a few customers were visible. Three men, one of whom was a Cambridge police officer, stood at the second-floor window overlooking the parking lot and the protesters.

A handful of customers were seen entering and leaving the store during the protest, where the speakers stood just a few feet in front of the doors.

One woman leaving with a bag of groceries said that she was aware of what the protest was about. “There are a lot of reasons for boycotting Whole Foods, and I understand the message,” she said, but she worried about other statements that might be allowed if the BLM masks were allowed.

Another woman leaving with groceries said that she was not aware of what the protest was about. “I’m not from here,” she said. When told that the protest was over management not allowing staff to wear BLM masks, she turned to the protesters and raised a fist in apparent support.