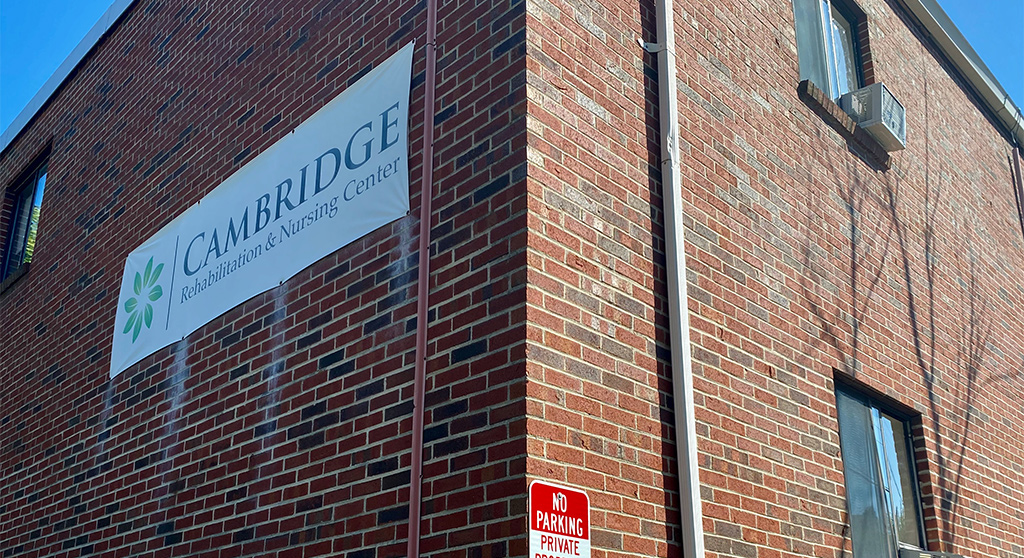 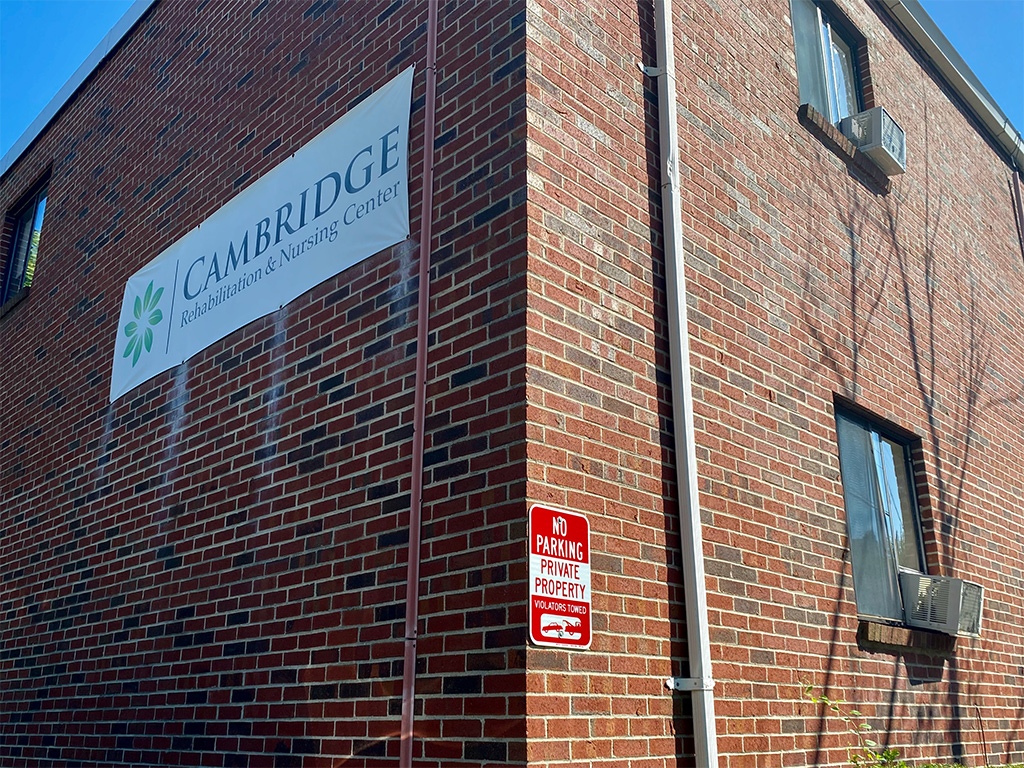 The Cambridge Rehabilitation and Nursing Center has reported at least one new case of Covid-19 among staff, which the U.S. Centers for Disease Control and Prevention considers an outbreak. (Photo: Marc Levy)

A few thousand students will return to campus at Harvard University and the Massachusetts Institute of Technology by early next month, an influx of people in an age group that has caused Covid-19 spikes elsewhere in the country. But if any of these college students have or get infected, Cambridge residents may not be told about it.

University health officials will test the students as often as three times a week and have pledged to inform the city’s health department about the number of cases and any clusters. Yet when vice mayor Alanna Mallon, citing residents’ concerns about the students’ return, asked last week whether the department will report the figures to the public “so that we will have a clear idea of where cases are coming from,” she got a noncommittal answer from Chief Public Health Officer Claude Jacob.

“I will take the feedback to our staff,” Jacob said at an Aug. 11 meeting of the City Council’s committee on economic development and university relations.

If the answer ends up no, it will be another gap in the city’s ambitious Covid-19 dashboard. The department’s daily updates cover a wide range of public health measurements but disagree with other government sources in some key areas.

For weeks, the number of deaths among Cambridge residents has remained at 99, according to the city dashboard. Yet the state Department of Public Health says there have been 106 deaths from Covid-19 in Cambridge through the end of July, according to a daily report posted on the state agency’s website.

One item on the state’s daily report for Friday is particularly worrisome. Cambridge Rehabilitation and Nursing Center said it had one to four new cases of Covid-19 among staff. The U.S. Centers for Disease Control and Prevention says any new case among nursing home staff should be considered an outbreak and result in expanded testing for all residents.

A state health department spokesman couldn’t immediately say Tuesday whether that is being done.

The nursing home is also among those that have volunteered to accept new patients with infections, such as people recovering from the virus after being treated in hospitals. According to a weekly CDC report on Covid-19 in nursing homes nationwide, Cambridge Rehabilitation and the city’s two other facilities have admitted patients with infections and some have reported new cases, though not recently. (Some of the admissions could be former residents returning from the hospital.)

One nursing home, Sancta Maria Nursing Facility, has reported since late May it has a shortage of nurses and aides. Sancta Maria also said it didn’t have enough gowns in seven of the 11 weeks between May 24 and Aug. 2. During three weeks, the nursing home didn’t have a one-week supply of gloves, according to the CDC report.

Jodie Silverman, spokeswoman for the Cambridge Public Health Department, said the city agency is “aware of the state reports and [we] continue to support and provide guidance to the facilities in Cambridge as needed.”

“To date, there have not been major spikes in our local facilities,” she said in an email. “The discrepancies in data are likely due to differing addresses on death certificates, test orders, and differing definitions of where someone ‘lives.’”

“We only have access to cases whose test results list a Cambridge address. If for some reason a person’s address identifies a different town, perhaps because they are in a short-term rehab, we don’t have access to their case,” Silverman said. As for cases among nursing home staff, the department previously said it would report employee cases only if the worker lives in Cambridge. 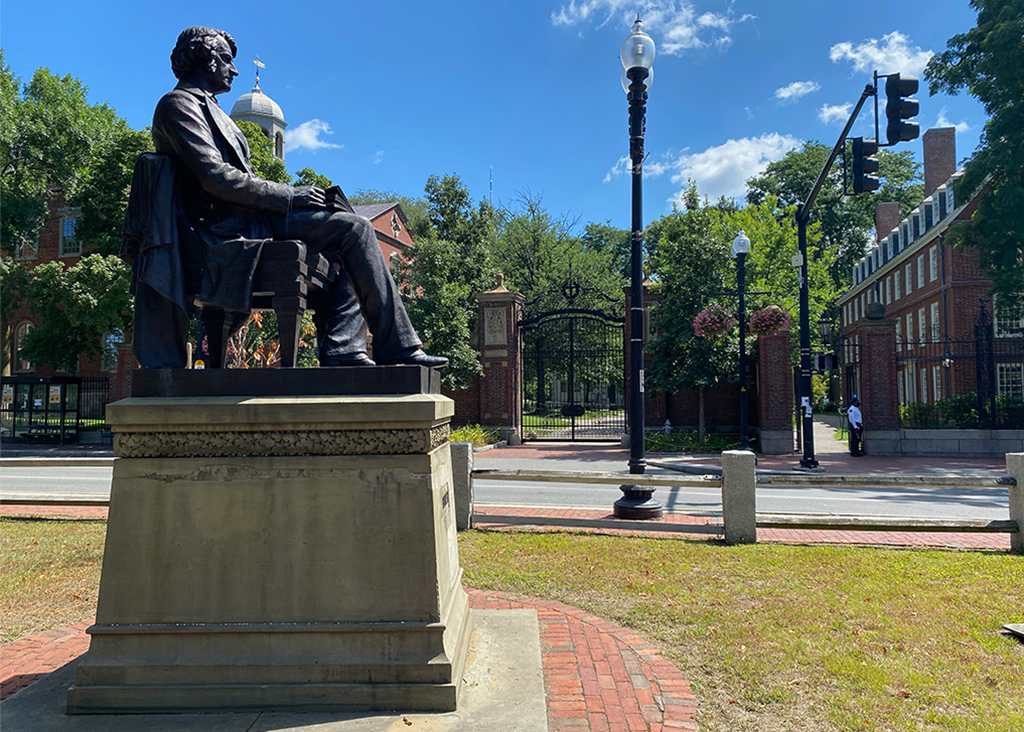 There’s slow traffic at the gates of Harvard Yard on Tuesday, with most students still say and awaiting a semester of virtual classes. (Photo: Marc Levy)

Speaking to city councillors about reopening plans, administrators and health officials from Harvard and MIT described a regimen of repeated testing, daily symptom reports from students, and strict limits on activities – on campus. (Lesley University is operating almost completely online and will house any returning students in hotels; in contrast, in Somerville and Medford, Tufts University plans to bring back all undergrads for fall classes beginning Sept. 8.)

The council committee learned that MIT usually enrolls 6,900 graduate students, and about 1,700 will live on campus this fall, of whom 900 were already staying here. Another 900 undergraduates, mostly seniors, will also return. Fraternities and other independent housing won’t be open.

At Harvard, about 1,600 undergraduates, mostly first-year students, and 200 graduate students will live on campus in Cambridge. Last year 23,000 full and part-time students were enrolled in Cambridge and Boston. As with MIT, students will be tested repeatedly and attest to their symptoms every day – on an app.

Neither university provided specifics on what would cause officials to close their campuses; MIT mentioned cases on and off-campus as well as state orders, among other things.

The Broad Institute of Harvard and MIT will do the extensive testing of the thousands of samples from students. (Harvard students will collect their own nasal samples with the help of an app.) The research center is also processing samples from the Cambridge Public Health Department’s free testing program for Cambridge residents and previously helped test residents and staff at the city’s long-term care facilities, residents in senior public housing developments and homeless people in Cambridge.

Broad also tested nursing home and assisted living residents and workers across the state. It will do the testing for Cambridge public schools and for other universities and colleges.

Broad has developed a method for fast viral tests with a turnaround time generally within 24 hours. It has a capacity of 35,000 tests a day – a huge number, considering that about 19,500 people were tested in the entire state on Wednesday, according to the state health department. Broad spokeswoman Karen Zusi said the institute is “working to increase capacity.” 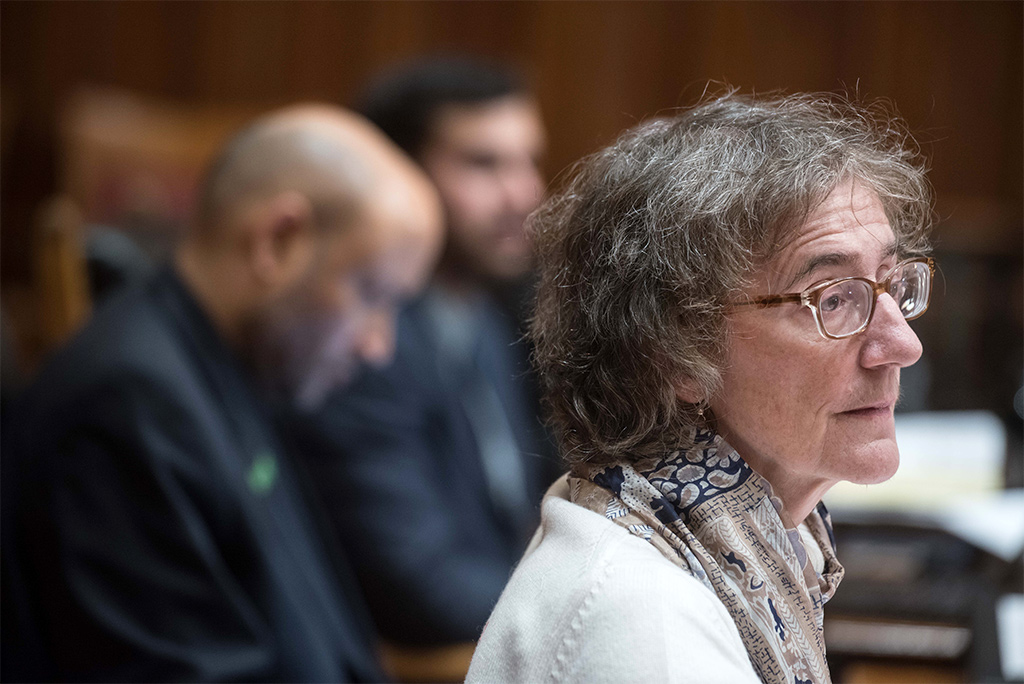 At the council committee meeting, councillors Quinton Zondervan and Patty Nolan pressed Harvard and MIT representatives to consider a cheaper and faster testing method that looks for antigens to the virus instead of virus particles. Many scientists, including Harvard epidemiology professor Michael Mina, say antigen testing is a more effective way than viral tests to monitor public health.

Mina has said the viral, or PCR tests, should be reserved to diagnose individuals; they rarely give false results, but they are expensive and it can take days for overloaded laboratories to give results while potentially infected people spread the infection.

Antigen tests are less reliable but results come in a little as 15 minutes, and if enough people get tested every day, public health officials will discover outbreaks fast enough to contain them, supporters say. Mina has said widespread antigen testing could snuff out the virus on its own, without the need for lockdowns and other restrictions that hurt the economy.

Proponents say few antigen tests are available because federal regulators are comparing them to the “gold standard” of PCR tests; they want the Food and Drug Administration to change its standard.

Speaking to the university health officials, Nolan said: “I would love all of you to think more deeply whether you could have a pilot test” of the antigen method. Zondervan chimed in: “Could the universities serve as a test for this type of testing to convince regulators? We need a different solution here to do public health surveillance.”

MIT Medical director Cecilia Warpinski Stuopis said the university might consider a research project but right now it’s focused on bringing students back to the campus safely. “We have been clamoring for these point-of-care tests – that can be done at home or a doctor’s office – so that not only our population but testing could be available to every community,” she said.