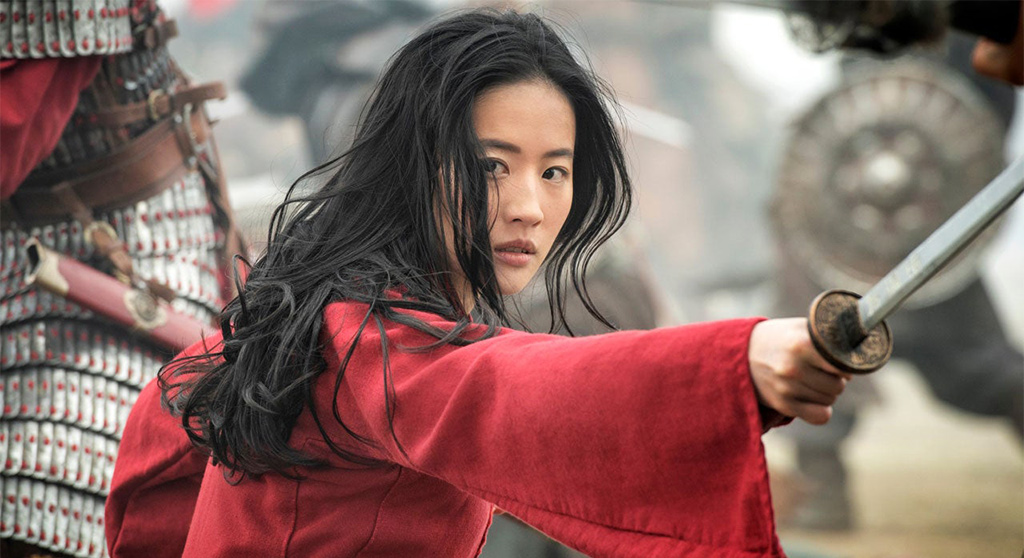 I feel like part of the onus of this review is to answer: Is the film worth the $30 it costs to stream on Disney+? I promise I’ll get to that. First let me just say that this live-action version of the 1998 hand-animated feature (both based on a ancient Chinese ballad and historical events) is stunning to take in, most notably the set design and stunts, though the leap to a more epic and spectacular format has nipped some of the wonderment and depth of character – similar to what befell the near real-life animation redux of “The Lion King” last year. Clearly there’s something inherent in the simple classic animation construct, be it the childlike innocence or abstraction of reality, that makes theses fable-esque tales come to life more viscerally.

The narrative here is the pretty much the same as before. Mulan (Liu Yifei) doesn’t want her aging and war-scarred father Hua Zhou (Tzi Ma) to be enlisted into the emperor’s army (martial artist Jet Li, hard to recognize) after a mandate issued for one man from every household to battle the marauding hordes from the north (led by Jason Scott Lee, who played Bruce Lee in “Dragon”). She dresses up as a boy and assumes the family post. As a soldier, Mulan proves fierce and effective, as well as being a natural leader and the butt of fellow warriors’ jokes about her Pigpen-esque odor because she refuses to partake in group bathing. The nice addition here is Li Gong (“Raise the Red Lantern,” “Miami Vice”) as a witch – something of a Morgan le Fay – in the service of Lee’s raider. Always captivating in posture, poise and projection, she’s the one who takes over every scene she’s in. Gone is Eddie Murphy’s wiseass dragon, though it’s replaced with a nonsensical phoenix that crops up to let you know a major transition has just taken place. (Geez, thanks, I didn’t know.) The other reason to see the film is the stunt work, with warriors leaping up inverted walls as if they were in an “Inception” maze and some nifty horseback gymnastics by Mulan and enemy archers; still, it doesn’t near apex wire work such as in Ang Lee’s “Crouching Tiger, Hidden Dragon” (2000) and Zhang Yimou’s “Shadow” from just last year.

Intriguingly, the film’s directed by Niki Caro, who’s made a series of impressively intimate and internal feminist-themed films including “Whale Rider” (2002), “North Country” (2005) and “The Zookeeper’s Wife” (2017) but gets a bigger palette here – and likely more studio supervision. As a result, the New Zealand-born director’s normal inward-looking lens feels obscured in the vastness.

Now back to that question: Is “Mulan” worth $30 to stream? Keep in mind you need to be a Disney+ subscriber, and if you’re not you have to lay out another $7 per month. The film, once you unlock it, is yours to watch as long as you keep paying those $7 bills, vs. let’s say “Bill & Ted Face the Music” which costs $25 to own on Amazon Prime and $20 to rent, giving you 30 days to watch it and 48 hours to finish after starting it. If you have kids who love the movie and will watch it over and over, it makes solid financial sense. If you’re a curious cinephile holed up on your own, probably not so much. The film for my money would have been more enjoyable on the big screen where the wire stunts, rich colors and meticulous sets would have stood out even more; given the safety factor, Disney’s done the responsible thing. That still doesn’t atone for what’s lost in translation, but for these times it’s a viable event for a family to enjoy safely together.