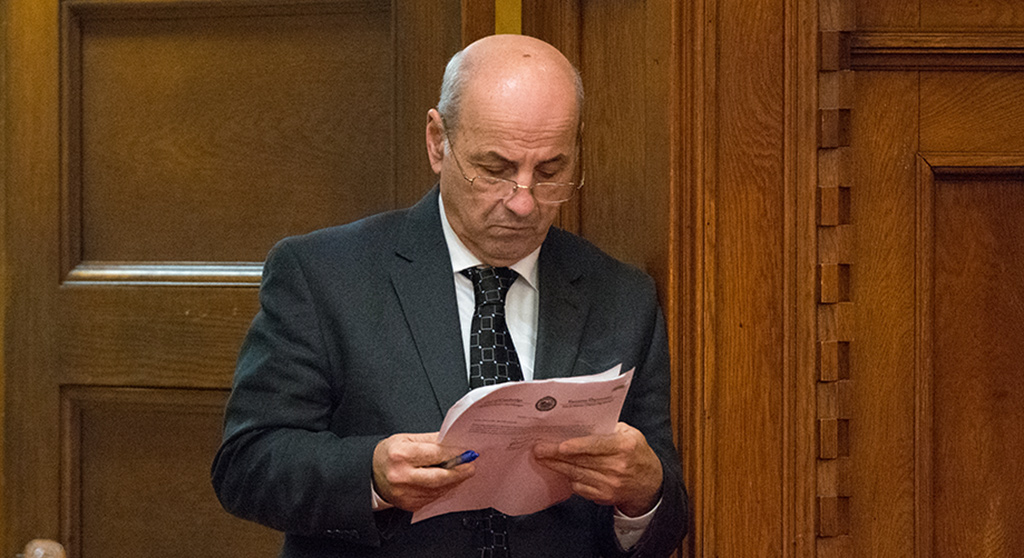 Simmons: DePasquale would quit ‘city he loves’ without salary hike
By Marc Levy 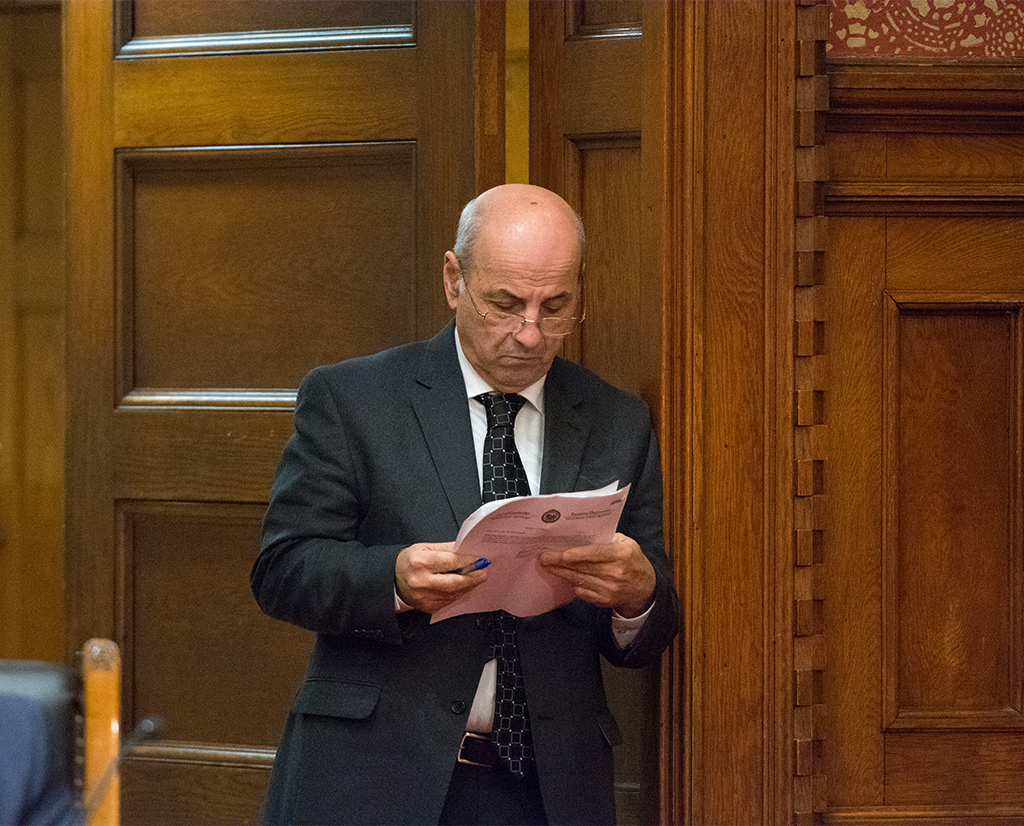 Louis A. DePasquale in 2016, shortly before becoming city manager. On Tuesday, councillors debated keeping him on for another 18 months, including saying he’d walk away in anger over not being promised a cost of living increase immediately. (Photo: Ceilidh Yurenka)

An 18-month contract extension offer for City Manager Louis A. DePasquale was approved at 1:08 a.m. Tuesday during an eight-plus hour meeting, with city councillors and the city solicitor working off a document that included typos and unanswered mysteries – including one that, in the fog of debate, looked like a six-month period in which a 2.5 percent cost of living increase accidentally doubled.

By the existing contract’s own language, the vote on the contract’s details did not have to happen at this meeting; the body merely had to tell the manager it was interested in the 18-month extension negotiated by councillor E. Denise Simmons.

But when Mayor Sumbul Siddiqui repeatedly suggested delaying a vote until the typos and questions could be addressed, it was ignored. Especially after Simmons offered a threat on the city manager’s behalf: “I don’t think he’ll accept it. I think we’ll lose him,” Simmons said. “And the question has to then become do you want to lose the head of a city that’s doing a great job.”

“For this reason, I would respectfully say, allow the man his dignity. Allow him to continue his work,” Simmons said.

The case for DePasquale

The threat changed the tenor of the room, despite Simmons having argued not long beforehand that DePasquale should be able to “continue to work in the city he loves.”

In addition, she said, the cost-of-living increases were deserved even if they seemed to be inexplicably doubled up. “This is fair given that the city manager came in at a lower amount than his predecessor did, so he’s still in some ways being underpaid,” Simmons said.

Councillors have had many frustrations with DePasquale, prominent among them resistance to doing a feasibility study of city-owned broadband Internet and getting action on council orders around matters big and small. Going into the meeting, councillors Nolan, Jivan Sobrinho-Wheeler and Quinton Zondervan wanted to give DePasquale another year with an option for a six-month extension, not an outright 18 months, especially given that DePasquale hasn’t had required evaluations from council over the past four years. They heard arguments that the city needed stability to get through a rocky near future of lower revenues caused by the coronavirus (from councillor Tim Toomey), and that it would take a long time to run a search process to find a replacement (from councillor Marc McGovern). In reply, Sobrinho-Wheeler said, “The position pays $330,000 a year. I believe it’s still the highest-paid municipal position in the state of Massachusetts and that we should able to get a reasonable talent pool for that even in a shorter time frame.”

Their year extension having failed on a 6-3 vote, the 18-month extension was then approved on a 7-2 vote, this time with only Sobrinho-Wheeler and Zondervan in opposition. But the cost-of-living increases negotiated by Simmons had to be handled, and questions began to pile up, including about dates that did not equal 18 months and that seemed to Nolan to deliver a period of overlapping 2.5 percent increases; Nolan said that given the moment, and the example of other executives who have been relinquishing pay, she “hopes the city manager declines this raise.”

On the other hand, McGovern felt it was nonsensical to be arguing over a 2.5 percent increase given how hard DePasquale had been working during the months of pandemic. Toomey agreed it was “quibbling” and with Simmons that the councillors were “jeopardizing the future contract.”

Even Nolan seemed taken aback. “I agree we should move forward. I don’t want to lose a city manager over this,” she said. “I would think we would not.”

The messiness of the hand-modified contract and lack of immediate answers – city solicitor Nancy Glowa said at one point she could run upstairs to her office for “five minutes” to clean up the document – had questions boomeranging around the room, though.

“Reviewing a contract this late is not a good exercise,” said the mayor, an attorney. “Agreeing to something the council just saw because it was put before us is not good optics … And I think there’s mistakes in here. Or there’s things that need to be clarified.”

Given that the existing contract called for just “written notice to Mr. DePasquale” on Monday that an extension was wanted, Sobrinho-Wheeler said he agreed the “optics just don’t make sense.”

When he said it, however, Simmons took offense. “I just don’t want [Sobrinho-Wheeler] or anyone else to think that I was trying to do something in the dark of night. It’s unfortunate that it came at this at this hour, but I will not have my character sullied by the use of inappropriate language,” she said.

The entire debate took up around an hour starting at midnight; the meeting, which started the previous day at 5:30 p.m., ended at 2:08 a.m.

The reviews are in

The reviews of those who stayed up to watch were not kind, at least among those who took to Twitter to comment.

“‘Agree to this tonight or I’ll walk’ is just the sort of collaborative governance style we in Cambridge have been looking for,” Saul Tannenbaum tweeted.

And without it having to take place. “I have never been so angry at the City Council in this city,” Chris Schmidt said. “This entire conversation is completely unnecessary right now.”

And Sam Gebru summed up how the council struck him: “A hot mess.”