Coronavirus edition, XXVIII: Sheltering films, from ‘Antebellum’ to a crime caper set in 1979 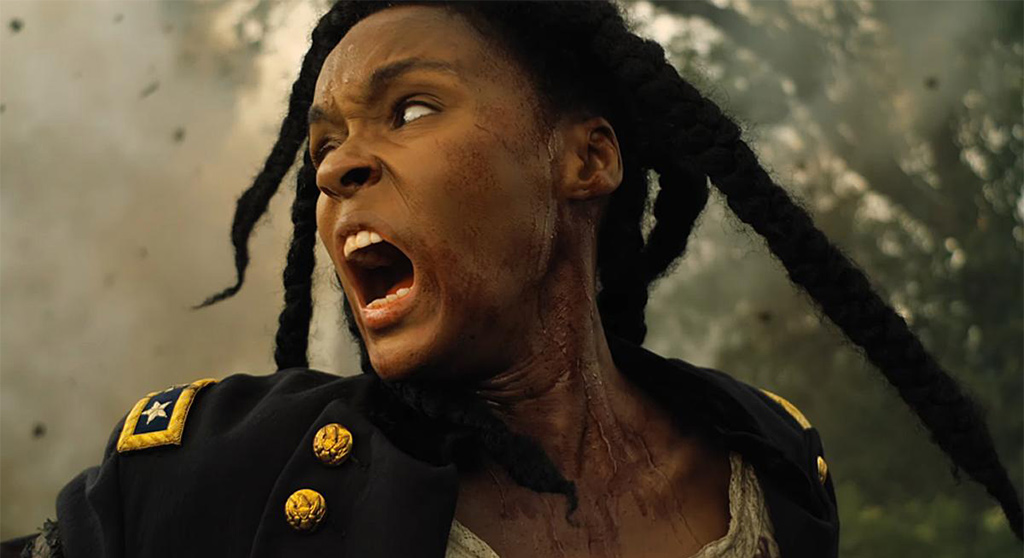 Coronavirus edition, XXVIII: Sheltering films, from ‘Antebellum’ to a crime caper set in 1979

Writer/director Sean Durkin made a sensational debut with the nervy “Martha Marcy May Marlene” nine years ago; this follow-up is full of mood and edgy as well, but isn’t as dark or deep as his freshman effort. The cast is spot-on, with Jude Law (who gets better with age) as a chap named Rory, a British financier living in the United States with his “beautiful, blonde American wife” Allison (Carrie Coon, from “The Leftovers” series). Something about business and a whim has Rory move the family back across the pond, where they have a grand estate and a high-flying lifestyle, but the money’s not flowing as Rory had hoped – he’s a reflection of 1980s greed, gambling on one big deal, and then weird things begin to go bump in the night and Allison’s prize stallion becomes stricken and suddenly ill. There’s not a lot of movement here, just slow-building dread and resentment. Not all the pieces click, but it’s an effectively moody stir.

This earlier effort by Durkin was a bold, eerie look at a group of off-grid isolationists an omen or two away from a Manson or Waco cult. John Hawkes, so good in Debra Granik’s “Winter’s Bone” (2010), is again creepy and compelling here as the iron-handed cult leader, and Elizabeth Olsen gives a breakout turn as the title character – a new recruit with eyes looking back to the outside world. The long name of the title is reflective of the cult’s gender rules and regulations. To say that women are subjugated would be putting it mildly.

Durkin executive produced this better-than-its-title-would-indicate effort by Dave Franco (James’ brother) about a remote vacation house on the California cliffs overlooking the crashing ocean where a quartet of hotties and their dog set out for a big getaway bash. Sexually wanton looks across couple lines and indulgent drug use rock the remote paradise early, but then there’s that creepy maintenance worker and something else lurking in the woods, let alone that passcode-sealed room in the basement. Decent orchestration in a familiar genre territory that doesn’t quite move fully to formula demands. (Read the full review from July 24.)

The cinema world lost icon Diana Rigg this week. She was most famous for her turn as Emma Peel in “The Avengers” TV series, but also starred in this Bond curio – which had 007 getting married (to Rigg) – with one-off Bond actor George Lazenby. Lazenby, a model and auto salesman who succeeded Sean Connery, had never really acted before and left the Bond franchise after this film, citing demands of the contract. He’d never really do anything memorable again other than “Emmanuel” movies. Rigg, on the other hand, had a Shakespearean past (“A Midsummer Night’s Dream” with Helen Mirren) and would later appear in “Game of Thrones.” “Kojak” portrayer Telly Savalas makes a great Bond villain here as the notorious Blofeld. He and Rigg would appear together that same year in another subterfuge thriller, “The Assassination Bureau.”

Ari Taub’s crime caper aims for a lot, with the kind of tongue-in-cheek giddiness and potent potpourri of personalities that made early Guy Ritchie fare (“Lock, Stock and Two Smoking Barrels” and “Snatch”) good devilish fun. Taub adds to the mix by setting the action in 1979 and clearly harbors a deep love of the classic American muscle car. The film revolves around a midlevel Irish gangster (Aidan Redmond) and a virginal law school student (Ryan O’Callaghan) with a jailbird father (Eric Roberts) winding up in a racetrack scheme. A hit man named The Bomber who looks like the leather-clad Mad Max and Sandra Bernhard make their way into the mix, with Tony Lo Bianco and Lisa Regina giving notable turns as a mob frontman and jealous wife.

This documentary from Jeff Orlowski (“Chasing Ice”) features myriad talking heads – all refugees from places such as Google, Facebook and Instagram, and nearly all white males in the 30-to-50 range – who testify to social media’s use of personal data to engineer behavior. There is a good degree of eye-opening concern about algorithms and bots programmed to profit from your preferences and tastes, but the doc makes this sound like a new revelation and never touches on the TV and magazine ads that were once target-marketed disruptive tools, let alone truly addictive product pushing such as big tobacco. Upsides to social media get pushed aside without bigger-picture relevance, and the film gets into talking about social media influence on democracy late in the game.

This one plays like “The Mighty Ducks” (1992) meets “To Sir with Love” (1967). Actor Miranda de Pencier, making her directorial debut, has her sights set on the plight of the residents of Canada’s most northern region, Nunavut, an Arctic span bigger than the rest of Canada but with a sparse 38,800 living on its barren tundra. Based on true events, the film sets out the suicide pandemic of indigenous youth, their disdain for white-imposed “help” and the outrageous cost of goods so afar ($300 for 12 items, one interloper learns at an outpost store). Into the glumness (eternal night adds to that) comes a  down-lander named Russ (Ben Schnetzer), the new teach and lover of lacrosse who uses the sport to reach out to fractious students with troubled home and personal lives. The film works, mostly for its exposure of an off-the-radar area and situation; stick around for the end credits that let you know where the characters’ real-life counterparts wind up.

The cruel world of plantation life in the South is on grim display as soldiers and overlords brutalize and abuse slaves with murderous intent. The film, written and directed by Gerard Bush and Christopher Renz, is a star vehicle for singer-turned-actor Janelle Monáe – so good in “Hidden Figures” (2016) and asked to do a lot here as both one indentured on that hellacious plantation and an academic and popular author in the modern world. The lives of the two women have a bridge, and that’s the film’s mystery; to liken it to similar films would be to ruin its sleight of hand. The cinematography by Pedro Luque and period sets are stunning, and Monáe carries it all off successfully. But overall, the film’s more intriguing for the horrors it touches upon than the sense of eerie thrills it tries to conjure.

A strikingly cute Australian family pic that delves deeper than the pablum platitudes you might assume, given the title and cheery production values. Candice (Daisy Axon, an amazing young actor with Pippi Longstocking looks and sass to watch for) is a bit of an outlier at school; her parents are on the rocks romantically and financially (there’s an uncle who seems to be an idea thief, but it’s more nuanced than that) and her best friend is Douglas (Wesley Patten), an aboriginal boy who thinks he has magical, multidimensional insight. Candice, whose favorite book to read is the dictionary, looks to solve everyone’s problems. None of it moves in predictable ways, and Axon carries it boldly, even doing a Dolly Parton impression, grand endowments and all.