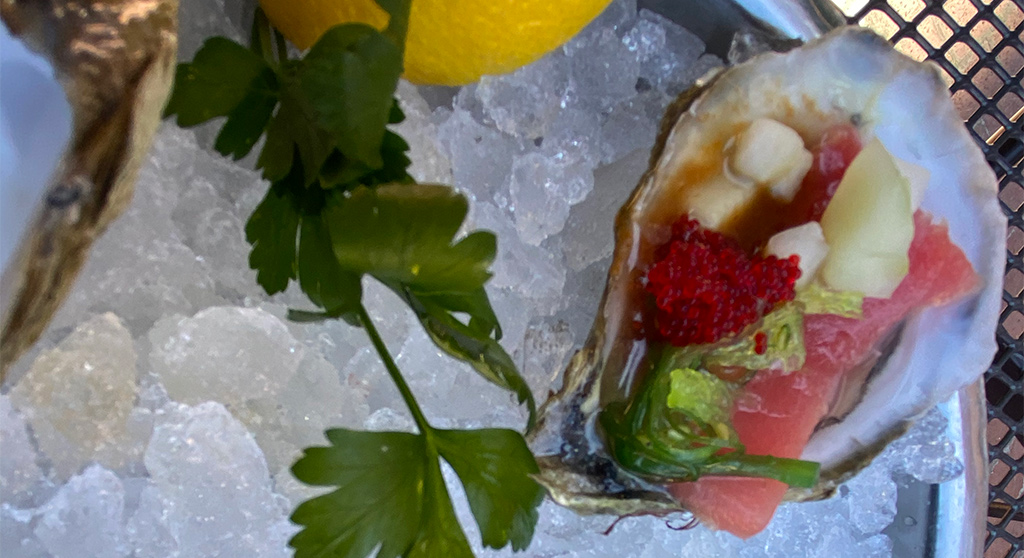 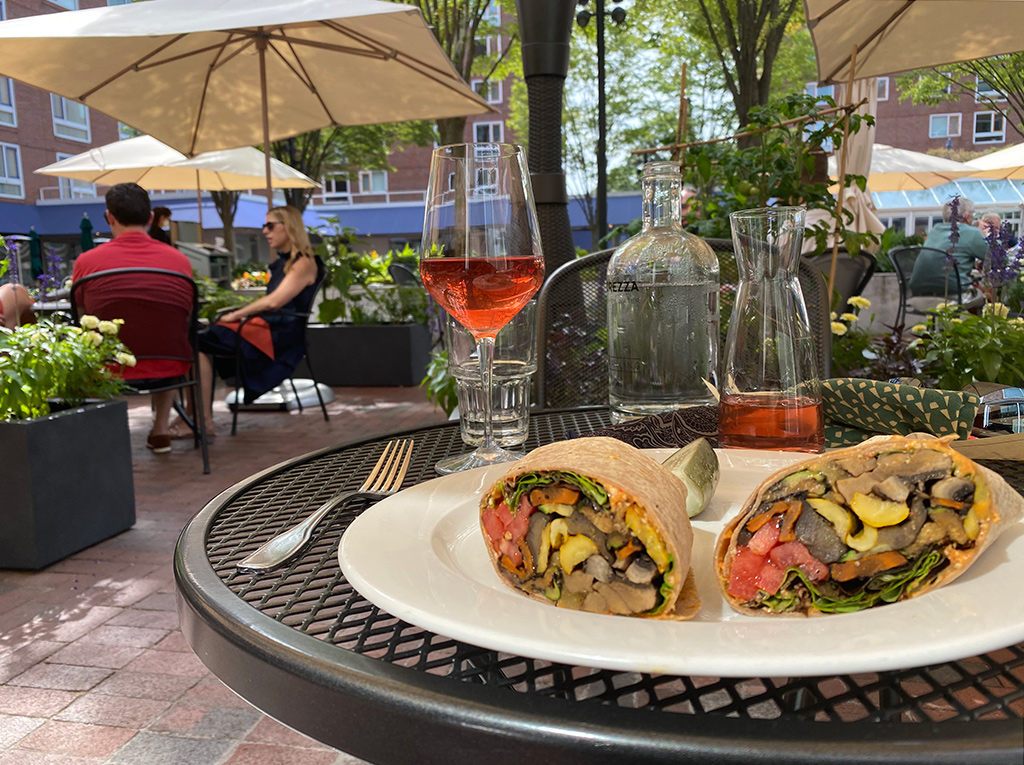 Fall is here, Gov. Charlie Baker is relaxing restrictions on bar space and the Charles Hotel in Harvard Square is in the final stages of a common-space spruce-up. The upper terrace of the Charles has always been a secluded gem, blessed with dining options. Legal Sea Foods recently abandoned the Charles, but Italian-themed Benedetto is still there (a play on Bennett Street, the Charles’ address) and longtime gastronomic stalwart Henrietta’s Table too, tirelessly open throughout most of the pandemic and long facade renovations that had trucks, cranes and dumpsters obscuring access. Under the orchestration of chef Peter Davis, this farm-to-table concept has been in service since 1995 – long before that was trendy – and has been renowned for its all-you-can-eat brunches. The current lunch and dinner menus and extremely pleasant outside seating among meticulously manicured landscaping still make for a relaxing fall feast. The chicken club is a mile-high beast on thin toasted challah with lean, crisp bacon and ripe, red tomatoes, but my favorite sandwich on the menu is the grilled veggie wrap with marinated mushrooms, eggplant and tomatoes adorned with fresh greens and a feta cheese spread; a wonderful mix of flavors, and much more satiating and hearty than my description makes it sound. The other thing to get is the spinach salad. “That sounds exciting – not!” you might say. But the whipped chevre aesthetically slathered on one side of the wooden bowl is a great way for a diner to mete out the amount that goes o a fork with the greens and fresh local blueberries dressed in a maple pecan vinaigrette. (You can add pulled chicken or salmon if you need protein.)

If you need more, consider the crab and corn chowder, which comes served in a mini cast-iron cauldron with a pucker of spice; and the mashed potatoes are a creamy delight – I tried them with the gravy once, but they are best just as served. Come to think of it, the chowder and the mashed side would make an interesting and adequate meal pairing in its own right.

During my last visit to the Table. the staff were rolling out heat lamps, but there is inside dining as well, and the eatery with the cute pig as its logo is also now serving breakfast. 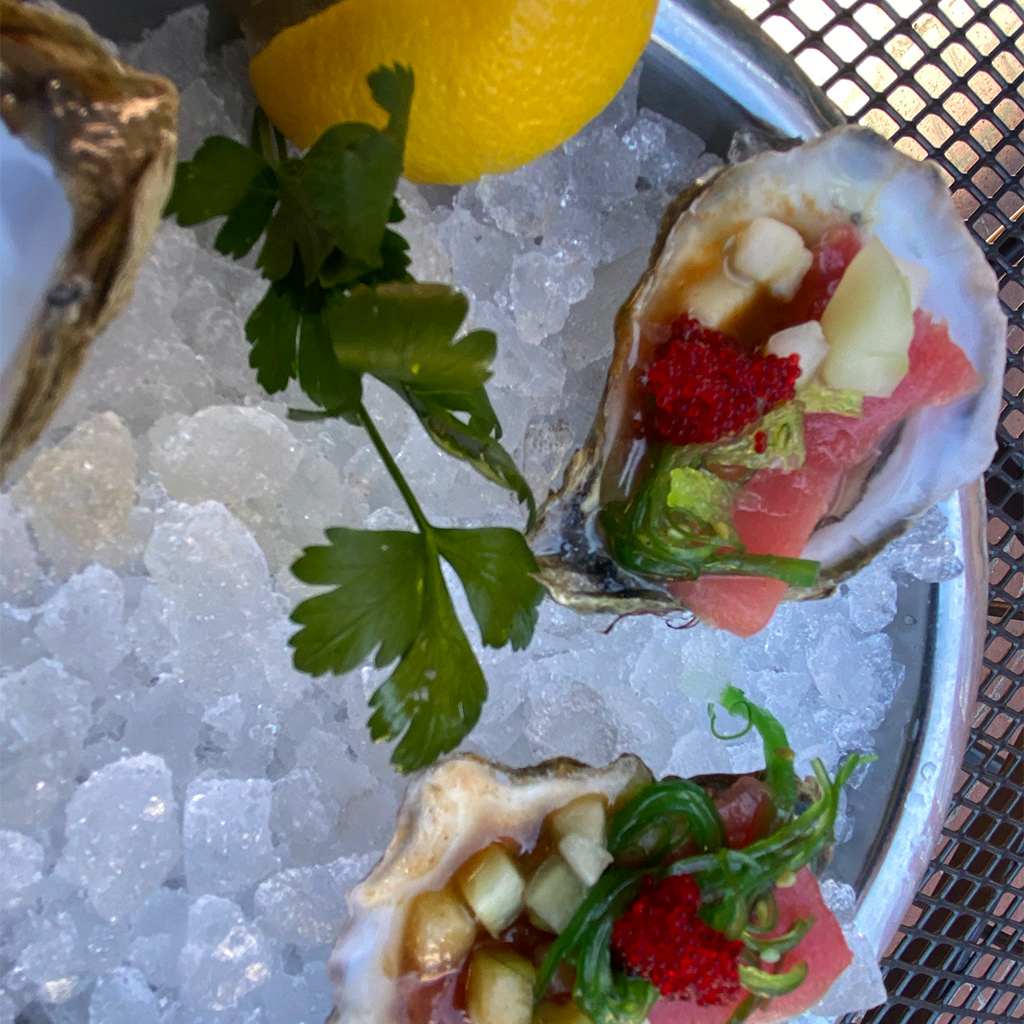 Down below, where once there was an ice rink (stolen from its New Hampshire storage facility a few years back) and Legal’s summer bar, Alewife-based seafood restaurant the Summer Shack is in pop-up mode. It’s not quite the same without the Red Sox on the bar TVs, though I think we can pass on this season; now that Baker is relaxing requirements, it could be a great place to nosh on fantastic lobster dumplings and watch Cam Newton and the Pats take on their next opponent. The dumplings I had here were better than I recollect last having at Alewife. The dining space is a series of socially distanced tables across from Noir’s gorgeously renovated patio, with drinks coming from either Noir or Henrietta’s Table, and will be even more cozy when the farmers market sets up Friday and Sunday. I also had the opportunity to try the fried gulf shrimp, and it was a sizable amount of big, succulent shrimp lightly fried with a smooth, zingy remoulade sauce. One thing I tried out of curiosity was the oyster – on the shell, but more like a shooter – topped with tuna sashimi and flying fish roe. (The Shack added sushi to its repertoire a few years back.) I would love to see those TVs up, and I wonder if the Shack might not also make use of that upper terrace space abandoned by Legal’s.