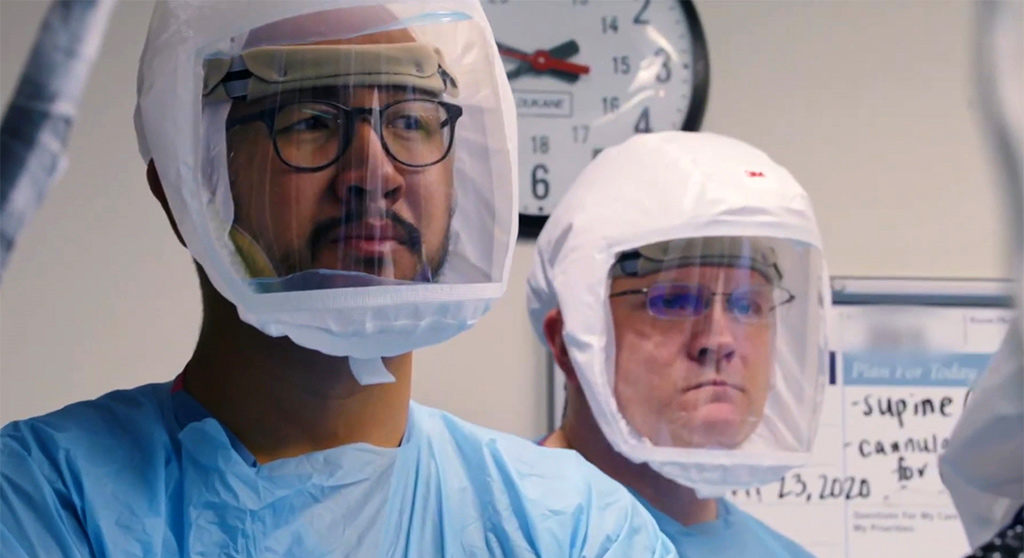 The 32nd Boston Jewish Film Festival, like most such events this year, has gone virtual. Things kick off Wednesday with “Saul & Ruby’s Holocaust Survivor Band,” about the title’s two survivors who perform together. That opening night event will host a live Q&A with director Tod Lending and his lively subjects. Most all of the 20 films and events (running through Nov. 15) have a live component to them; other highlights include a behind-the-scenes look at “The Marvelous Mrs. Maisel” series with writer Noah Gardenswartz, and a closing night ceremony with a virtual cocktail designed by mixologist Naomi Levy. For information, details and tickets go to the BJFF website.

Kim Yong-Hoon’s Korean crime caper has been billed as the next “Parasite” (2019), but it’s really more of a Tarantino-esque nonlinear narrative with a dash of “Fargo” (1996). The action centers on a Louis Vuitton bag full of cash, the cucked spa employee (Bae Seong-Woo) who discovers it, a dour wife (Shin Hyun Bin) trying to off her husband, myriad mob minions and a manipulative femme fatale (Jeon Do-yeon) trying to play them all against each other. Told in five backup-and-rewind chapters, “Beasts” is a frenetic and stylistic burn, with much credit due to Do-yeon for her fiery X-factor.

A gorgeous, reflective wonderment about the mysterious doings of octopi. Shot in the kelp forests of South Africa, the film begins as something of a midlife criss for wildlife cinematographer Craig Foster, who, in his daily snorkeling endeavors, encounters a young female octopus and bonds with her emotionally and physically over nearly 400 days. The cinematography is stunning, but nothing is more awe inspiring than the intelligence and tactics on display by Foster’s teacher.

Mathieu Kassovitz’s documentary-styled film, shot in stark black and white, follows three bristling Parisian street youths, angry and looking to act out in the wake of riots and police violence. The young men may be cut from different ethnic and cultural backgrounds (Jewish, Black and Arab) but are united in their impoverished station and palpable frustration. Kassovitz based the film, which elevated Vincent Cassel to international name, on true events. Now, 25 years later and with the racial and class divides fracturing American and a vote looming, “La Haine” feels too eerily current. The film plays as part of the Brattle Theatre’s Virtual Screening Room.

Jennifer Kent is maestro of moody ambiance and emotional turmoil, as evidenced by “The Nightingale” (2018) and this kiddie creep show, in which the boogie man springs from the pages of a book to haunt a young boy being reared by his widowed mom – dad died in a car accident on the way to the hospital during labor. Like Jacob Chase’s recently released and similar-in-scope horror thriller “Come Play,” Kent’s “Babadook” is a debut feature crafted from a shorter work, and the more accomplished realization of the two.

Azhy Robertson, the main reason to see this week’s “Come Play,” appeared in Noah Baumbach’s portrait of a marriage unwinding. Both films may center on failing domestic unions, but otherwise have little in common – semi-autobiographical memory versus psychological horror. Baumbach, whose best remains “The Squid and the Whale” (2005), gives equal voice to both sides of the married couple here: an aspiring actor and a MacArthur grant-winning playwright played, respectively, by Scarlett Johansson and Adam Driver. Something of a first-world dilemma on paper, but wholly relatable in execution.

Ricardo Perez-Selsky’s dark indie rom-com, written by and starring Chase Hinton, tells the saga of a struggling L.A. artist trying to find love online. Ian’s not the smoothest at dating, telling women about how things went with the last women he took out – “Wait, how many dates did you have this week besides me?” Then he virtually meets Sofia, who happens to be in Mexico City taking care of her nana. Sofia’s return to L.A. keeps getting delayed, and she won’t FaceTime with Ian, so the possibility he’s being punked or catfished starts to creep in.

Cinema lost a legend this past week with the passing of Sean Connery, who was more than just the first and the best James Bond – he was also indelibly the most macho 007. After making his last canon Bond film, “Diamonds are Forever” (1971), Connery in the ’70s would make an array of vastly different films, including “The Wind and the Lion” (1975), co-starring John Huston and “The Man Who Would Be King” (1975), directed by Huston; “A Bridge Too Far” (1977); and this sci-fi curio directed by John Boorman (“Deliverance”) that’s kind of a more gonzo version of “Logan’s Run” (1976) – with Connery in thigh-high boots and a “Borat”-esque G-string – as a futuristic savage turned enforcer by the elites in power. We will miss you, 00.

A fitting but straight-ahead celebration of the career of John Lewis, who as a young man stood shoulder to shoulder with the Rev. Martin Luther King Jr. on that march to Selma and during his peaceful civil rights protests – that “good trouble” – was arrested 40 times (and another five after becoming a congressman from Georgia). Much of the film focuses on Lewis’ 2018 push for Stacey Abrams to be governor of Georgia, and it feels like the it shortchanges his legacy. Still, it captures the activist’s passion and message loud and clear. The film plays as part of the Somerville Theatre’s Virtual Screening Room.

Neon Films has made the latest from Alex Gibney (“Enron: the Smartest Guys in the Room”), Ophelia Harutyunyan and Suzanne Hillinger free to watch through Tuesday. The why is obvious: The election is upon us, and this cutting doc chronicles for voters the worldwide spread of the coronavirus and the Trump administration’s mishandling and denial of it. The lens is fairly evenly aimed, but the theme of rejecting science pops up in nearly every other frame. Like Sacha Baron Cohen’s latest “Borat” pranks, “Totally Under Control” is a get-out-the-vote push and a must-see for the undecided.