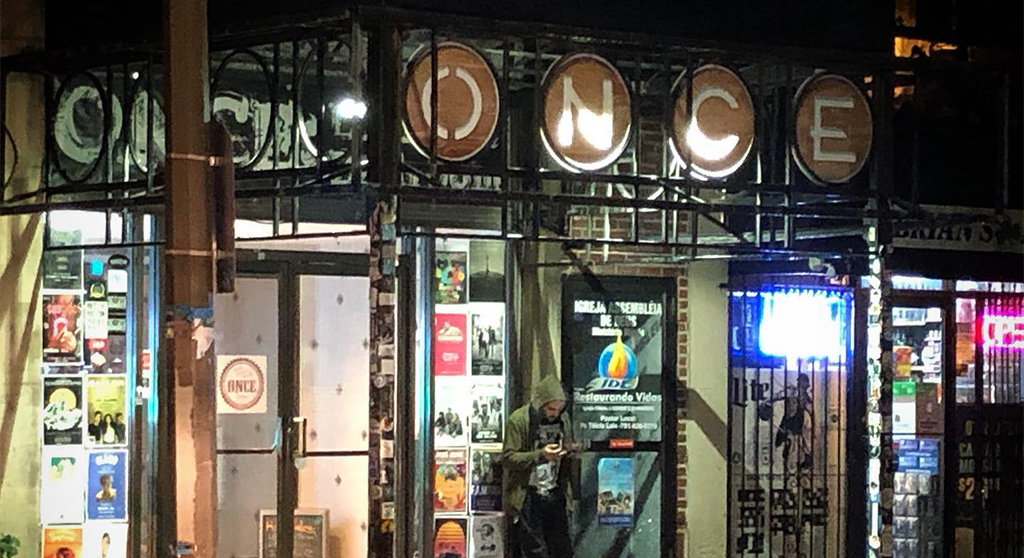 Once’s rock stage is leased by Cuisine en Locale, Gonson’s catering company focused on nutritious, locally sourced meals. With Cuisine en Locale also going out of business, there is no way for Once to continue in its current home.

The news follows an announcement from Callie Chapman that her [email protected], a dance and art facility, was shutting in Central Square, with its final day at 550 Massachusetts Ave. being Monday. “We cannot safely and economically operate in a pandemic, and our landlord has plans to turn [the space] into micro-unit apartments,” Chapman said Tuesday. “While it is incredibly sad that we must move on to finding a new home, the amount of great spirit, art, love and community that graced the walls of a single studio over the past 4.9 years is inspiring.”

“I have plans for us, and everyone who wants to join us on the way,” Chapman said. The venues join a grim list of recent losses, with the ImprovBoston comedy club in Central Square deciding Nov. 6 to give up the lease on its Prospect Avenue theater. Somerville has lost the small music venues Bull McCabe’s Pub and Thunder Road already; in Cambridge, neither The Middle East nor The Cantab Lounge, home of Club Bohemia and the Boston Poetry Slam, is expected to reopen even as they linger on the sales market.

But Gonson also stressed the importance of “not curling up and going to bed” in the face of Covid-19. Once will live on, albeit in a different format: The Once Virtual Venue, created by staff and volunteers in March. “Virtual performance is here to stay, even though it’s not the ideal. It creates community at a time when there isn’t another option,” Gonson said.

Fans can still rock out to music at the Once Virtual Venue on YouTube by tuning into the content there, subscribing and liking the venue’s videos.

Once staff have also built a traveling performance space that will continue to be used for recording in “partner spaces” until the venue is able to find a permanent home once again.

Gonson credits a successful GoFundMe campaign with having kept Once and Cuisine en Locale afloat at the beginning of the pandemic. Generous donations made it possible to pay people and prevented Gonson from having to lay off her entire staff, she said. When the GoFundMe money ran out, Once was the recipient of pandemic relief funding – but that funding has run out. With “no additional aid in sight,” and Once’s revenue dropping to “less than 20 percent of what it was pre-pandemic,” the space can no longer hang on, she said.

According to Gonson, the mounting costs of operating a dormant venue are largely the culprit. These extend beyond rent into the “kinds of stuff that people don’t talk about,” such as insurance, the alarm bill, pest control, the cable bill, the phone bill and workers compensation costs. Once Somerville released this image of its Lonely Leesa and the Lost Cowboys concert being enjoyed Friday via its Virtual Venue.

The venue tried different measures, such as canceling its liquor license, to save money during the coronavirus lockdown. The boldest attempt was the Once Soundstage project, which aimed at continuing to produce “normal” content safely during the pandemic: Artists were invited into the venue under strict Covid-19 precautions to perform for an online audience.

With the hall’s 18-foot ceilings, venue doors left open with fans on to circulate air and “maybe six people” invited to play in a 10,000-square foot-space, the Soundstage was pandemic-friendly. (In addition, everyone inside Once were asked to wear masks, and had their temperatures taken upon entry.) In theory, it was a great way for musicians and Once volunteers to experience some sense of normalcy and an opportunity for fans to donate to support the venue.

Despite the ingenuity of Gonson and her staff, the economic pressure on independent venues –  widely eulogized as the first to close during the pandemic and consigned to be the last to open – is proving to be insurmountable for some. In a recent survey, the National Independent Venue Association found that only 10 percent of its members expect to remain standing after the pandemic ends.

Government aid in the form of the Save Our Stages Act is stalled in the Senate. As a National Independent Venue Foundation spokeswoman, Gonson expressed frustration that the ability to deliver aid to venues in need is “just sitting there” waiting for approval, she said.

Gonson’s biggest fear? That only “very big, very vanilla rooms” such as the Boch Center or City Winery will survive. Those places “with very deep pockets” lack the diversity, both in performers represented on stage and in genres of music showcased, that indie venues can provide. There will also likely not be local bands on the bills, she said.

Gonson and her staff have “seen a better response to local bands” than to larger groups during their virtual performances. Why? As Gonson said, “We started with international acts and it wasn’t compelling to anyone. People want to see their friends. They want to see Anjimile or Ezra Furman. They want to see beloved artists. It feels safe.”

Without venues such as Once, which continue to be battered by the pandemic and a lack of government aid, it remains to be seen where music fans will go to find this sense of security post-pandemic if independent venues aren’t funded soon.

To support the venue in its absence, fans are asked to follow and share Once’s posts on social media, become a supporter of Once on Patreon, or donate through Venmo or PayPal. Those wishing to donate their skills to help the venue produce virtual content can use this form on Once’s website.

To support the larger movement of independent venues rallying for government assistance, Gonson’s newly formed local organizing group, called Save MA Stages, is coming together to petition at the state level for funding, she said. The current level of funding, as she put it, is “not enough to save anybody.”

Anyone interested in getting involved with Save MA Stages’ efforts as a volunteer should fill out an interest form here.