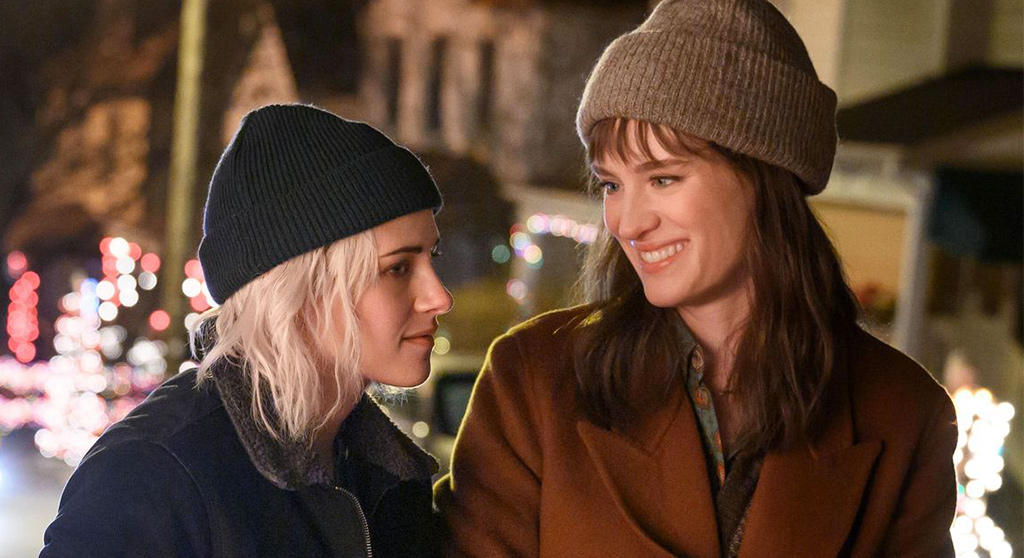 Clea DuVall, the actor best known for her roles in the TV series “Veep” and “The Faculty” (1998), targets holiday tradition and family structures in “Happiest Season,” her sophomore directorial effort. The setup has Harper (Mackenzie Davis) and Abby (Kristen Stewart) heading to Harper’s very conservative parents’ house for Christmas. There’s much promise for a joyous sojourn: Abby’s got a diamond ring in her pocket at the ready for a marriage proposal at the right time, and she’ll be meeting her in-laws to be. But en route, it’s revealed Harper’s not out to her fam, and Abby’s tagged just as her roommate.

You can see where this is going a mile out, and while the two leads spark a solid chemistry, it’s Mary Steenburgen as Harper’s controlling mom Tipper (as in Gore, when she wanted to censor music?) and Aubrey Plaza, so good in “Black Bear” (2020) and “Ingrid Goes West” (2017) as Harper’s ex, Riley, who light up the screen. DuVall, who cowrote the script, adds a bevy of side threads that turn the family’s cozy manse into a maze of repression and skeletons in closet. Harper’s politician father, Ted (Victor Garber), is running for mayor of Pittsburgh (an apt setting, considering the state’s pivotal role in the recent election), and an upright appearance is demanded at all turns; and there’s something very off about the marriage of Harper’s hostile sister, Sloane (Alison Brie). Mostly the parents stand by and watch the dysfunction unfurl, until Abby’s gay male confidant (Dan Levy), sensitive to her position, drops in and poses as Abby’s hetero beau – like a “Queer Eye” cast member trying to go all Schwarzenegger.

As sure as there’s milk and cookies on Christmas Eve, reckonings, reveals and epiphanies get unwrapped. DuVall and her talented ensemble pull it all off nicely, though the fine balance between drama and comedy gets a bit wobbly and inconsistent. The scenes between Stewart’s Abby and Plaza’s ex are the most heartfelt, emotional and genuine. Stewart, who held up the slack thriller “Underwater” this year and navigated similar territory in “Lizzie” (2018) gets her opportunities to shine, though the film feels like it should be Davis’ for the taking. The tall angular actress, imposing in the TV series “Halt and Catch Fire” and as the can-do cybernetic in “Terminator: Dark Fate” (2019), gets somewhat lost in the shuffle – a hub for all the frayed anxiety to flow thorough for so long that she never truly gets her own moment. Still, “Happiest Season” delivers all the holiday madness in entertaining form with a few different sides and trimmings to make the rewrap feel fittingly anew.