‘Chaos Walking’: On this sci-fi New World, displays of masculinity are clear, dangerous 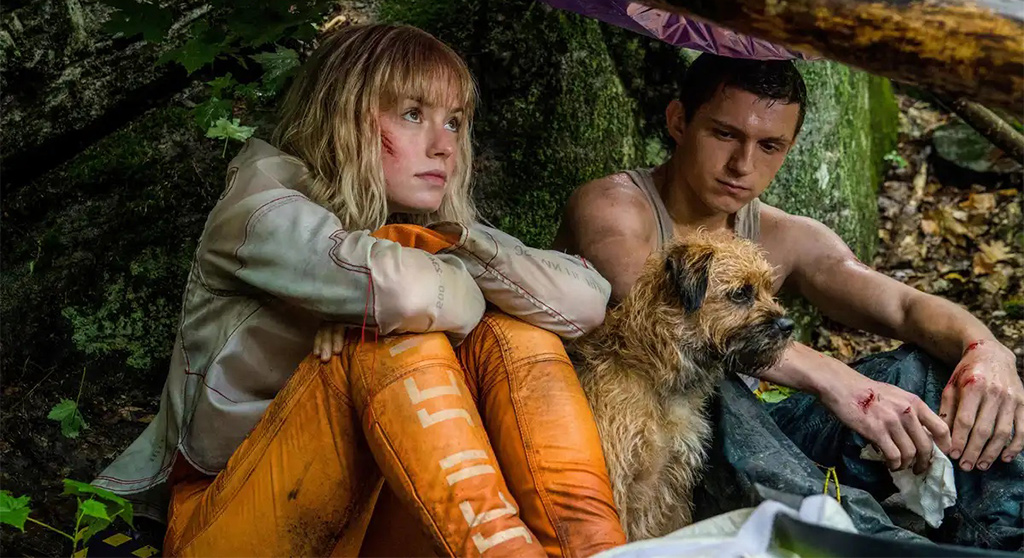 ‘Chaos Walking’: On this sci-fi New World, displays of masculinity are clear, dangerous

On a far distant planet two centuries into the future, a colony of humans lives in what feels like a Western frontier town atop a forested hilltop. Verdant and inviting like the Adirondacks or British Columbia’s Northwest Pacifica, this is some great outdoor space. The humans in “Chaos Walking,” however, are at war with the planet’s indigenous species, known as the Spackle. It’s an interesting, and I guess, apt name, as the tar-textured, obsidian-colored humanoids look something like sculpture park art more than anything threatening – I feel like I’ve seen them around the grounds of the deCordova Sculpture Park and Museum.

Throughout the film we hardly ever see any of the wall patch-named menace, besides one or two encounters. No, the evil here comes in the form of other humans. David Prentiss (Mads Mikkelsen) – make that Mayor Prentiss – presides over Prentisstown, seemingly the only outpost on the planet. The main things to note about Prentisstown is there are no women, and all the men have digital Pig-Pen dust clouds over their heads called “The Noise,” which basically is whatever’s going on in their mind. What’s that, you say? Imagine going to your boss to ask for a raise and the request is promptly denied due to “tough times,” so you politely say, “Thanks for hearing me out, maybe next year?” as your Noise blurts, “Bastard, you knew I just had a kid, you told me you would bump me up two years ago and you just got a 20 percent bonus for holding down costs? Such a liar!” Awkward and dicey moments happen. (So what of the title? Would not “Chaos Talking” make more sense?) Some of the men can mute their Noise, though; others, including the mayor, can turn it into a sonic shockwave of sorts or project doppelgängers.

“Chaos Walking” is very much a Western in construct, a sci-fi crossover like “Cowboys & Aliens” (2011). The men have blasters, ride horses and are draped in Viking fur dusters, if ever such a thing existed. The reason there are no women, we’re told (like much in Prentisstown, it comes from the lips of the mayor), is that they couldn’t handle The Noise and that the Spackle targeted them. There’s also, across a valley dell, a husk of a gigantic space ship that holds some answers. No one seems curious enough to seek them, and of course, the mayor doesn’t want anyone to go looking.

Did I mention that “Chaos Walking” stars Tom Holland (the new Spiderman) and Daisy Ridley (Rey in the latest “Star Wars” go-round)? Young fresh faces, marketing-perfect to bring Patrick Ness’ wildly popular dystopian YA novel, “The Knife of Never Letting Go” to the screen (Ness co-wrote the screenplay). They’re supposed to be what Jennifer Lawrence was to “Hunger Games” or Kristen Stewart was to the “Twilight” saga, but Viola (Ridley), a crash-landed explorer form Earth, and Todd Hewitt (Holland) a Prentisstown resident already at odds with the mayor, feel relegated to the background of the action – its din, or Noise, if you will. The film’s at its most alive when Mikkelsen’s mayor or his firebrand preacher (David Oyelowo) are onscreen. Mikkelsen, a Dane by birth and so good in last year’s “Another Round,” seems to have created a niche by playing compelling baddies in Hollywood product. He made for a very dark Bond villain in “Casino Royale” (2006), portrayed the cannibal Lecter deftly in the underappreciated TV series “Hannibal” and continues  the effort triumphantly here. He’s become this century’s equivalent of Klaus Maria Brandauer.

The thing that becomes evident midway into “Chaos Walking,” which is directed by Doug Liman, who with “The Bourne Identity” (2002) and “Edge of Tomorrow” (2014) has proven his hand as an action filmmaker, is that the setup is all there is to this future show, and anything piquing interest gets immediately muzzled by the noise of frenetic plot movement. If we can back up for a second, westernized humans have come to a planet and are taking it from the indigenous population. Hmmm, never heard that one before. And what about the notion of male domination drowning out women – not just their voice, but their very existence? Pretty topical stuff. Then again, the planet this all unfurls on is called “New World.” You get the allusion, but you can’t feel it.