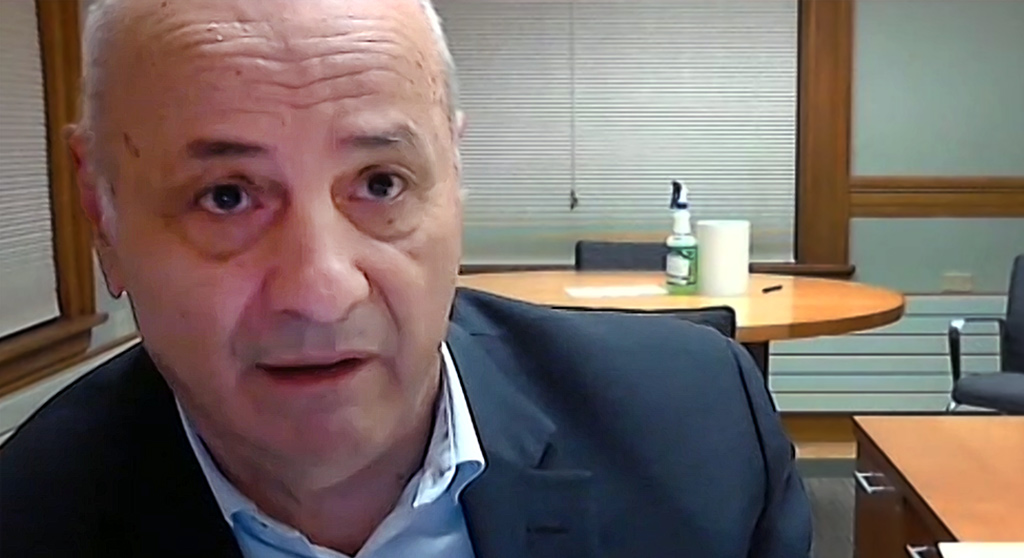 At odds with notes from expert advisory panel, but citing 'politics'
By Sue Reinert 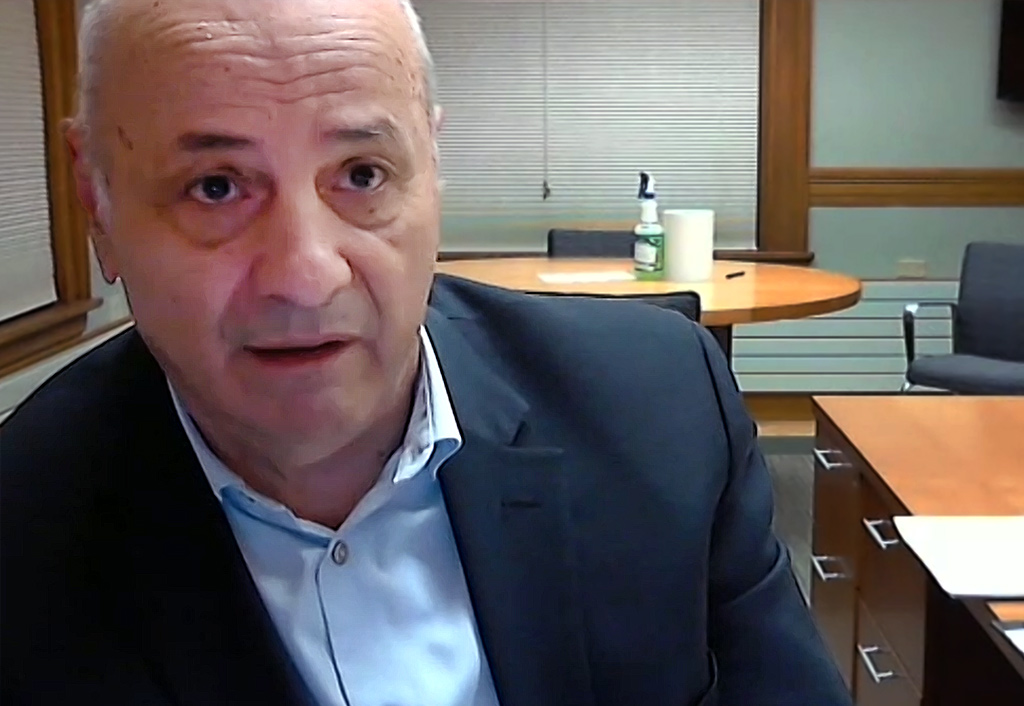 City Manager Louis A. DePasquale during a virtual meeting of the City Council.

The long-running conflict over relaxing Covid-19 limits on restaurants grew sharper Monday as City Manager Louis A. DePasquale warned city councillors not to make “public health policy” in opposition to his decisions and create “unnecessary alarm,” adding that “I will not prioritize politics over public health policy.”

DePasquale’s language was apparently directed at two councillors – Jivan Sobrinho-Wheeler and Quinton Zondervan – who have called persistently for a more cautious reopening in Cambridge and sponsored a policy order Monday requesting that the city manager reimpose a 25 percent capacity limit on restaurants and not go forward with reopening large entertainment sites March 22, as the state has decided. The order went down to defeat, with only Sobrinho-Wheeler and Zondervan voting for it.

The city manager’s defense of his policies clashed not only with the two councillors, but with scientists on the city’s Expert Advisory Panel, established to help the city deal with the pandemic. The advisors voted Nov. 12 in favor of shutting down indoor dining, and last week “expressed strong concern about state and local reopening decisions (especially restaurants and other indoor congregate activities) before we have achieved a high vaccination rate,” according to minutes of the panel’s March 10 meeting.

Apparently taking note of scientists’ opinions, DePasquale said: “We understand the science on how the virus spreads, and [that] informs our approach, but science is not the only factor that is used in decision-making.”

DePasquale added that the Cambridge Public Health Department hasn’t seen evidence that indoor dining caused Covid-19 clusters here. In contrast, minutes from the panel of experts’ Feb. 4 meeting said that in general “restaurant dining may be the single biggest contributor to community transmission” based on reports from contact tracers and “recently published epidemiological evidence.” This month, staff from the public health department visited Cambridge restaurants to see how customers were acting and found that they were not following guidance to take off their masks only to eat.

“Not surprisingly, it’s quite clear that diners do not use masks once seated, whether or not they are actively eating and drinking. This behavior is unlikely to change substantially even with better guidance, so other means of protecting other diners, waitstaff and kitchen staff seem especially important,” the minutes of the advisory panel’s March 10 meeting say. 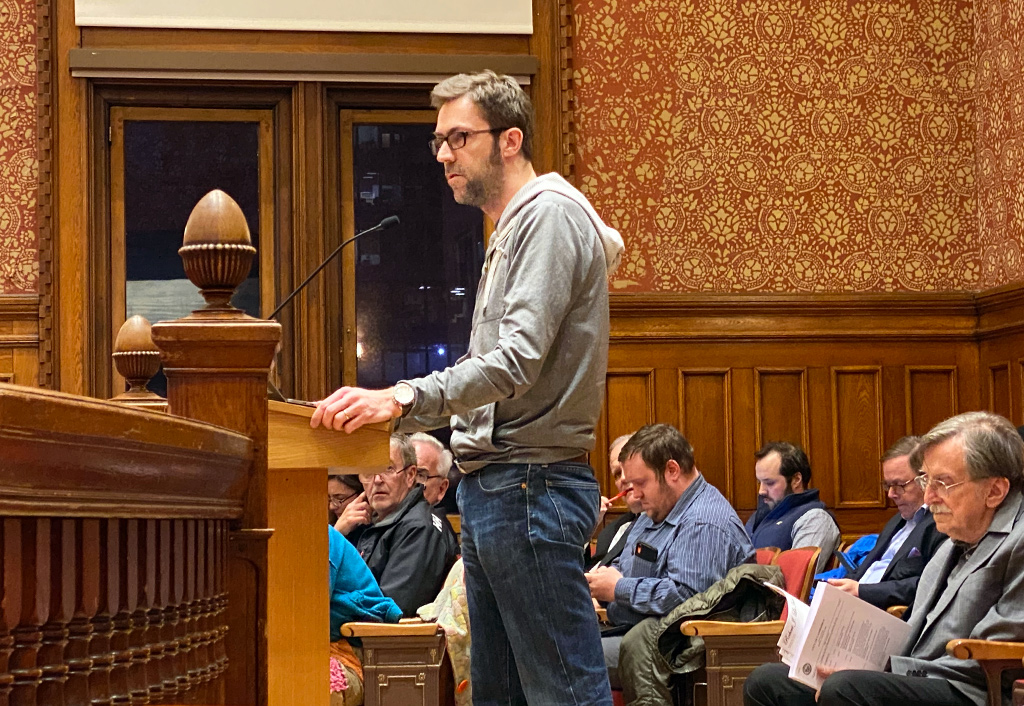 Harvard’s William Hanage warns the City Council of the nearing coronavirus March 2, 2020. He now warns of the prevalence of a U.K. variant of the coronavirus. (Photo: Marc Levy)

Panel member William Hanage, a Harvard T.H. Chan School of Public Health epidemiology professor and Cambridge resident, warned of the effect of coronavirus variants in circulation, especially the more transmissible and probably more deadly variant first identified in Britain. The U.K. variant made up 70 percent of a local group of Covid-19 samples that were genetically sequenced recently at the Broad Institute of Harvard University and Massachusetts Institute of Technology, Hanage reported at last week’s meeting.

When that variant accounts for 100 percent of infections in Massachusetts “it is very likely the case number will begin to increase,” the minutes of the meeting said. At Monday’s council meeting, chief public health officer Claude Jacob reported that three cases of the U.K. variant have been identified in Cambridge, and two cases of a South African variant that laboratory experiments show is more contagious and slightly less susceptible to vaccines approved in the United States.

Statewide, only six cases of the South African variant have been identified as of Sunday, according to the U.S. Centers for Disease Control and Prevention, so Cambridge accounts for a significant proportion. There were 174 cases of the U.K. variant in Massachusetts. Since the state is genetically sequencing fewer than 1 percent of samples from residents, “it’s likely that there are undetected cases among residents.” Jacob said at the council meeting.

Zondervan and Sobrinho-Wheeler got virtually no support from other councillors for their policy order asking for a rollback of reopening. Several shared the sentiments of councillor Marc McGovern, who told thee two: “I trust what the city manager is doing. The numbers are low here … I disagree when you said businesses, restaurants won’t go out of business tomorrow [if we hold back on reopening]. There’s a lot of restaurants that are on the verge of going out of business, and every little bit will make a difference.”

Vice mayor Alanna Mallon went further, saying most Cambridge restaurants are too small to benefit from eliminating capacity limits and castigating without naming “the motion-makers” for not consulting the Inspectional Services Department to find out the impact of the rollback.

Mallon said the department had compiled a report showing that only large restaurants would be able to continue keeping tables 6 feet apart and increase their number of customers. “I don’t think the motion-makers talked to Inspectional Services to get the data before this policy order. I will vote no because there’s no basis for this policy order to exist tonight. The capacity limits, being removed, did not add significant seating into any of the restaurants. I will be voting no. I will be encouraging the motion-makers, again, to please reach out to city departments, prior to putting policy orders in, to get the facts before they bring them to the city council for discussion knowing that the entire city – and our small-business community and the small restaurant community, is watching and waiting and hoping for guidance from us,” Mallon said.

Asked Tuesday for a copy of the report, Mallon said it is being compiled. “The information I got was anecdotal from Inspectional Services after they have spent many many hours visiting restaurants to ensure they are in compliance, but it was backed up by all [executive directors] of the business associations,” she said in an email.

Looking up and elsewhere

Councillor Patty Nolan took an optimistic view of the Expert Advisory Panel’s conclusions. “They indicate there are many ways in which restaurants can use practices to ensure that transmission doesn’t happen in the restaurant. I didn’t get a strong message this is the absolute wrong way to go, but more we need to be cautious, very careful and continue to monitor folks – all over the city, not just in restaurants,” she said.

And councillor Tim Toomey said he was concerned not about indoor dining but about people not wearing masks outdoors. Toomey said, contrary to most scientific evidence: “We hear nothing from my colleagues in terms of how to properly enforce the wearing of masks [outdoors]. That to me is more dangerous of spreading Covid than people – 10 people sitting in a restaurant, in a small restaurant.”

In the end, councillors Nolan, McGovern, Simmons and Toomey and mayor Sumbul Siddiqui and Mallon voted no to the order. Councillor Dennis Carlone, who did not participate in the discussion, voted present. Councillors Sobrinho-Wheeler and Zondervan voted yes.