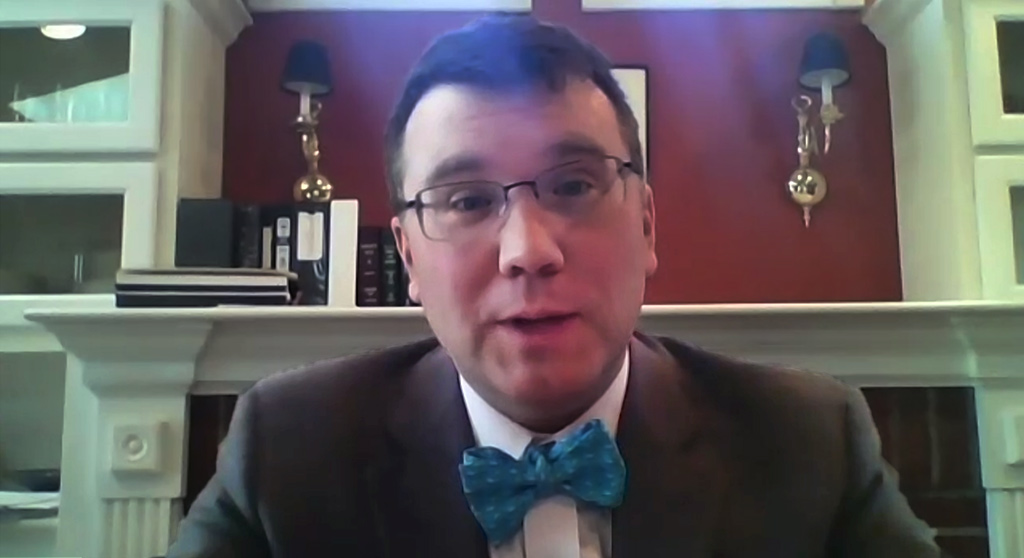 The legal defense of a faked Cambridge fire law hasn’t grown visibly stronger over time, but it has evolved with moves to bigger courts and has come to include attacks on First Amendment rights.

In an hourlong hearing March 23 before Suffolk Superior Court judge Christine M. Roach, the state said the owners of the former UpperWest bar in North Cambridge went beyond the protections of the First Amendment by arguing with fire inspectors – even though the argument resulted from the inspectors threatening to shut down the bar with an inapplicable law.

“It really wasn’t a calm, reasoned exchange of ideas,” assistant attorney general Eric Haskell told Roach during the virtual hearing. “It was an argument. It was raised voices. It was interrupting.” There was even inadvertent touching as the sides looked in the dark at the single xeroxed copy of a cooking-equipment law brought by inspectors.

In fact, Haskell said, the 35-minute exchange from 2018 captured on audio and video showed that bar co-owner Kim Courtney crossed over into territory covered by the Commonwealth v. Carter ruling from 2017, in which teen Michelle Carter was convicted of encouraging her suicidal boyfriend by text to take his own life – not the first giant leap in a case that alleges threats and witness intimidation despite a lack of anyone saying they felt threatened or intimidated.

Haskell’s gambit about “speech that basically functions as conduct that’s integral to violation of a valid criminal statute” seemed like a stretch to Ruth Bourquin, senior and managing attorney at the ACLU of Massachusetts, who is working with Courtney and bar co-owner Xavier Dietrich on the case. Bourquin noted that the Carter case applied when there is no lawful purpose to speech – but urging an emotionally disturbed person to commit suicide is different from pointing out to fire inspectors that the law they’re trying to enforce doesn’t apply where they’re trying to enforce it.

“This speech not only had a lawful purpose, it’s constitutionally protected,” Bourquin said. “All the [owner] did was try to convince the officers that they are misapplying the law. [The right to] verbally oppose or challenge police action without risking arrest is the principal characteristic by which we distinguish a free nation from a police state.”

Background of the case 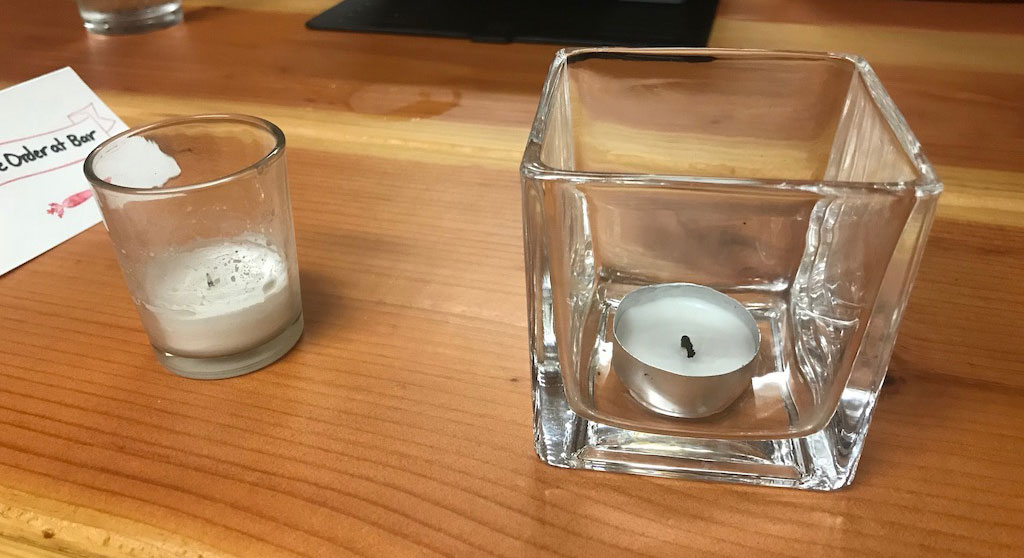 Fire inspectors tried to manage the “imminent hazard” of tea lights at a North Cambridge bar in 2018 by citing a law about portable cooking equipment. (Photo: Marc Levy)

In assessing whether the city and state violated the free speech rights of the bar owners, Haskell represents the state’s Alcoholic Beverages Control Commission against an appeal of its Oct. 3, 2019, ruling about UpperWest, which has since closed.

What led to the ruling was a Sept. 29, 2018, visit to UpperWest by fire inspectors who insisted co-owners Courtney and Dietrich extinguish the bar’s little tea lights – but by citing a law about portable cooking equipment. The state’s argument is that the 35-minute debate about the law constituted an illegal hindering of the inspectors, and that toward the end Courtney uttered a threat amounting to witness intimidation.

That element revealed another way the case has evolved. When the city defended its punishment of the UpperWest bar, its lawyers argued to the state in 2019 that the bar owners’ video and audio recordings couldn’t be relied on as evidence because they might have been altered or edited. On March 23, both sides referred repeatedly to that evidence to tell their side of the story. Haskell at one point commented that a decision was “up to the court’s review of the video.”

Haskell raised doubt in court about his own familiarity with the video, though, despite telling Roach he had “watched it many times.”

“Let me find the language here and make sure that I have it exactly right,” Haskell said in introducing his case that threats were made against Cambridge fire inspectors. “What the license manager said was … ‘You will live to regret this,’ is what the Alcoholic Beverages Control Commission found.”

Neither the audio nor video include that phrase, which has been repeated by fire staff, police, attorneys from the Cambridge Law Department, in a finding by a three-person ABCC panel and now by Haskell. (What Courtney told the departing inspectors in 2018 was, “You guys are going to regret behaving this way, this is not how this works.”)

The fire inspectors testified to the city as long ago as Nov. 7, 2018, that they did not take a bar owner’s comment as a physical threat, and a police officer on the scene, Dan McGinty, testified to the state June 24, 2019, that he couldn’t cite any other basis for a “threat” either, since it isn’t a crime to file a lawsuit or complain about an employee’s conduct. Yet Haskell still argued that “the manner of the license manager’s participation in this conversation is indicative of her intent. Are we cooperating with the inspectors or are we not?”

The legal standard for a true threat requires either physical interference with an officer or a threat of physical harm, said Bourquin, of the Massachusetts chapter of the American Civil Liberties Union.

Roach also did not seem convinced by the state’s arguments. “There are certainly many, many interactions with law enforcement that are not calm, reasoned exchanges – that doesn’t mean that the First Amendment disappears,” Roach said. 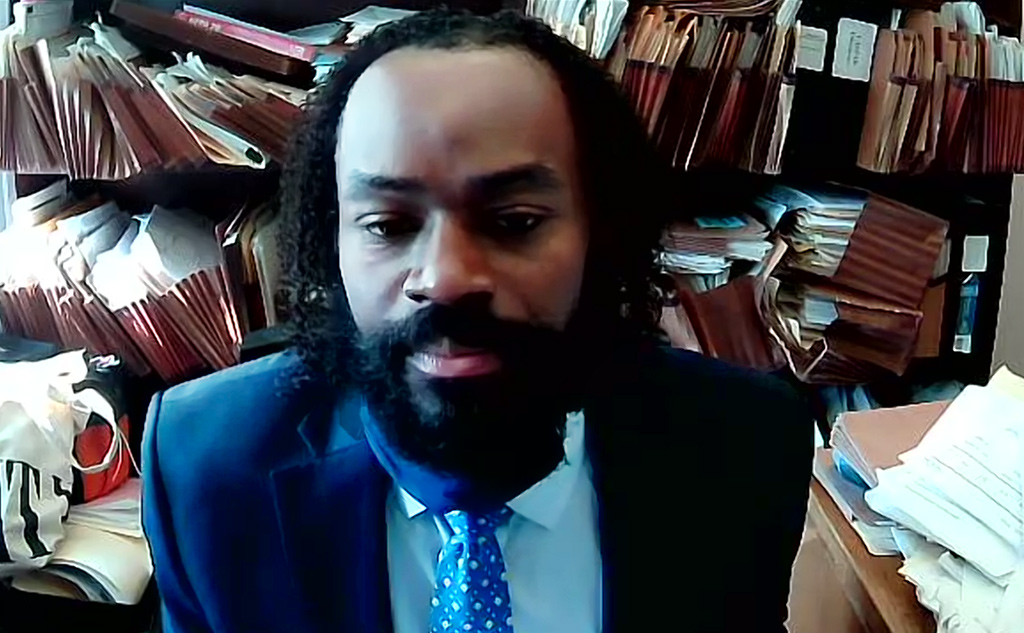 The city also had representation on the call from Keplin Allwaters, assistant city solicitor, who added that “when [Courtney] made the statements to the Cambridge firefighters and Cambridge police officers, the subjective intent of the person who utters that statement … is not relevant.” Katherine Sarmini Hoffman, who had argued the city’s case with Allwaters, is no longer with the Law Department.

There were several additional laws brought up and debated during the hearing; some arose from points the city and state have added since the ABCC hearing, which Bourquin said was improper. And though the city and state have brought up laws showing that the fire department can make its own regulations and fire inspectors can enforce them, all that happened Sept. 29, 2018, was that the inspectors issued a “verbal cease and desist” order; Section 1.7.7.2 of the state Fire Safety Code requires that it be in writing, Bourquin said.

And she said claims that the tea lights represented an “imminent hazard” were hard to take seriously when inspectors knew they were burning since an August visit and proceeded to have a 35-minute discussion instead of ordering they be put out. “They have the authority. They at any time themselves could have either blown out the candles or engaged in this conversation,” Bourquin said. “They left them burning the entire time the conversation was going on in the parking lot, and in spite of Miss Courtney asking them to hurry up.”

There is no set date for a next hearing or ruling by Roach. The judge said her review of the case and evidence “could take a bit of time.”