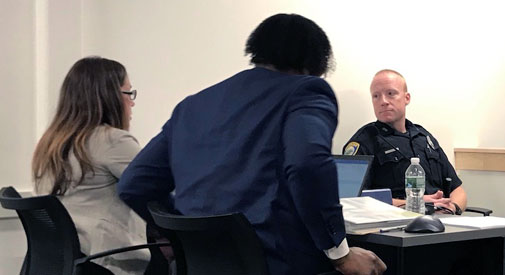 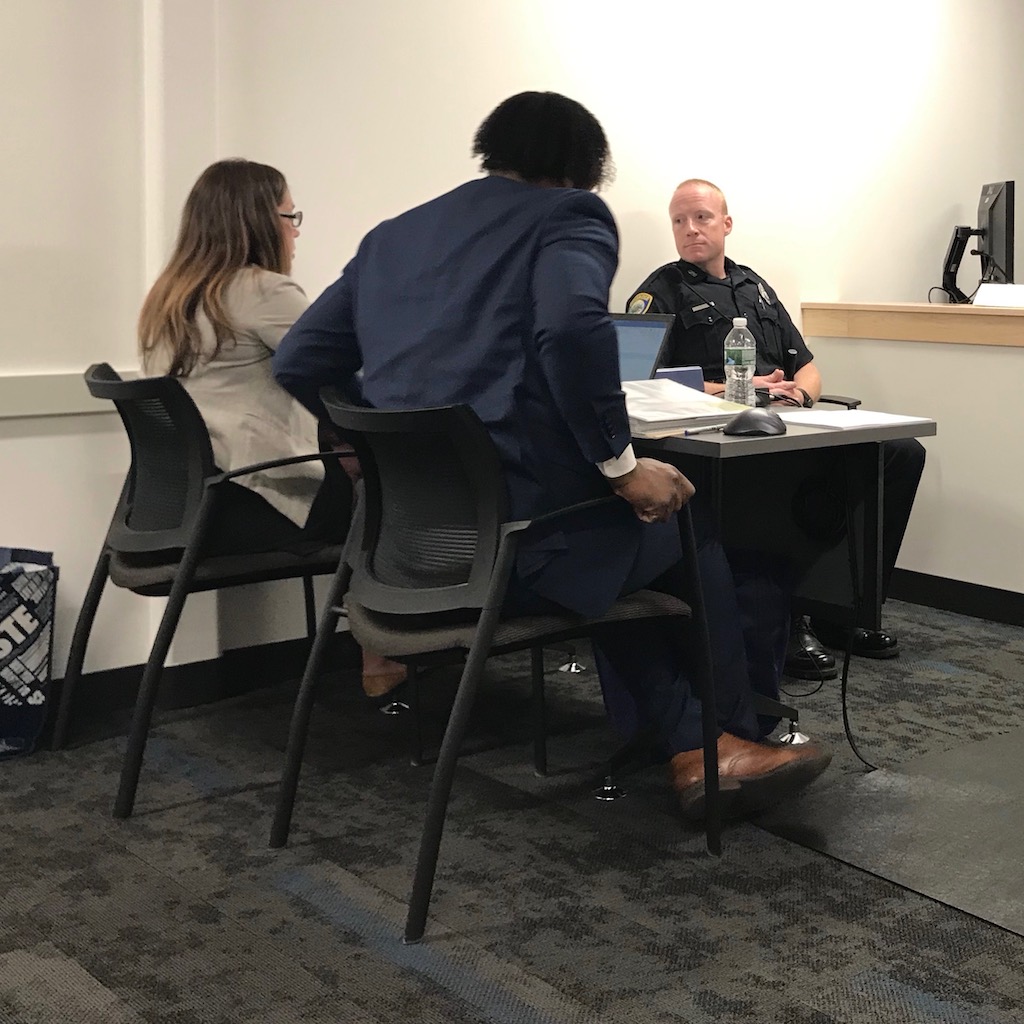 Cambridge Police Officer Dan McGinty prepares to give testimony June 24 in the Chelsea hearing room of the state Alcoholic Beverages Control Commission. It was the fifth day of hearings about the case against the owners of the UpperWest bar. (Photo: Marc Levy)

City lawyers say the UpperWest bar in the basement of 1 Cedar St. had illegal tea lights set out last August, and that when fire inspectors came back in September to see them extinguished or the bar shut down, co-owners Kim Courtney and Xavier Dietrich made “threatening statements” to them.

Officer Dan McGinty was called to the stand June 24 by city lawyers Keplin Allwaters and Katherine Sarmini Hoffman to help bolster the city’s case. They had McGinty affirm he was “familiar with Massachusetts criminal laws” as a graduate of a law enforcement academy and patrol officer for eight years and, as the officer on the scene during a Sept. 29 visit by fire inspectors to UpperWest, he testified that the owners were heard saying the inspectors would regret their actions that night.

McGinty didn’t hear the statements, though he was present at the time, and didn’t learn of them until two months later at a city License Commission hearing, he said in testimony to the state Alcoholic Beverages Control Commission.

That comment to the fire inspectors by Courtney that “You guys are going to regret behaving this way, this is not how this works” is part of more than 20 overlapping charges against UpperWest by the License Commission. (Charges about candles are at least as numerous.) The city has issued a five-day license suspension as punishment, but pursued it as a five-day closing of the business. The state officials are hearing an appeal from the bar owners against that closing.

McGinty cited the bar owners’ words incorrectly as “you will live to regret this,” despite there being audio and video available of the conversation that he said he watched and listened to in preparation for his testimony; the phrase has also been cited incorrectly without fail by city officials including the fire department’s deputy chief Peter Donovan and Capt. Philip Arsenault; police officer Benny Szeto; License Commission executive director Elizabeth Lint; and attorneys Allwaters and Sarmini Hoffman.

The three license commissioners, including police commissioner Branville G. Bard, found UpperWest’s owners guilty Nov. 7 even though fire inspectors testified to them that they knew Courtney’s comments didn’t involve violence. “I did not take it as a physical threat. [Maybe] she wanted to get me in trouble somehow with my position,” Donovan said. “I took that to mean … that we would get in trouble for being wrong and harassing her,” Arsenault said.

In pursuing the comments as a crime, the city is violating the bar owners’ First Amendment rights, suggested Ruth Bourquin, senior and managing attorney at the ACLU of Massachusetts. The First Amendment to the U.S. Constitution makes room for all speech but “true threats,” in which the speaker makes a “serious expression of an intent to commit an act of unlawful violence,” Bourquin said in an amicus brief submitted to the state in March.

“This matter appears to raise serious free speech issues,” Bourquin has said. “Residents have a constitutional right of free speech, and that includes the right to object to how public employees are carrying out their duties.”

To the ACLU, it looks like it’s not Courtney and Dietrich who are trying to intimidate, but the city, Bourquin said. “Efforts by public officials to intimidate them out of exercising that right [to free speech] by imposing license suspensions for past expressions of concern” can’t be upheld without violating state and federal constitutions, she said.

Under questioning by Courtney and co-owner Xavier Dietrich last week, the notion there had been a “crime” collapsed further.

“Officer McGinty, you testified that we threatened to commit a crime, correct?” Courtney asked during a cross-examination June 24, the fifth day of a case heard over the course of four months.

“What crime was that?” Courtney asked.

“When you made the statement, ‘You will live to regret this,’ that would be threatening possible employment, like with their employer or possible lawsuit,” McGinty said.

“Is it a crime to sue someone?” Courtney asked.

“Is it a crime to file a complaint against someone?” Dietrich asked.

When Courtney tried to circle the officer back around to what crime it was that he believed had been committed, considering his responses, the city’s lawyers objected, saying that he’d already answered. Jean Lorizio, chair of the ABCC, agreed initially – but Dietrich pointed out that the questioning so far had only eliminated two possible crimes. “So what we’re exploring now is, is there any [other] option out there? Is there any crime out there?” he asked.

Allowed to continue, Courtney asked the officer: “Were there any other ‘threats’ that you believed constituted crimes … Other than what you testified to today, which was the the threat against someone’s employment or the threat of a lawsuit, were there any other threatened crimes that you used to come to your conclusion today that we violated the statute?” 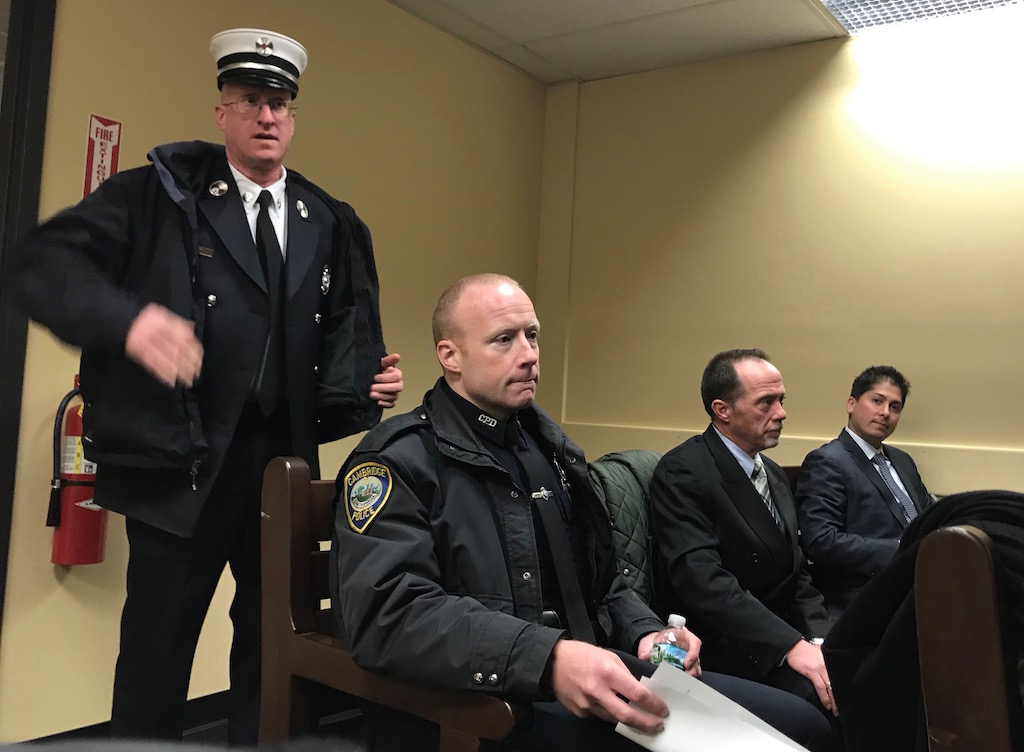 In another development in the case, Courtney and Dietrich submitted into evidence a log of changes made to the fire department website they got by making a public records request of the city.

The department website had nothing about candles last year when they looked before setting out tea lights, and even when fire inspectors descended on their business in September with threats to shut it down, there was no rule to be found online. (The website did have a section on “open-air fire regulations” – for candle use outside.) Strangely, a “candles” section saying the fire department “does not allow the use of candles unless approved by the Fire Prevention Bureau” appeared on its website just in time for UpperWest’s appearance before the License Commission in November, then was taken down; and a new section about “candles” – saying they are allowed only “for a birthday cake presentation” – appeared last month in time for fire officials’ appearance before the Alcoholic Beverages Control Commission.

The city had presented its own log during an ABCC hearing held April 9, when it produced the city’s assistant director of technology, Eric Belford, to swear that the language on the department’s “open-air fire regulations” hadn’t changed since Aug. 6, 2015.

“This log is not relevant to our discussion,” Dietrich pointed out to the commissioners.

Dietrich asked the city’s tech expert if the log showed changes to a web page about “candles” in Cambridge.

“This only refers to the open-air fire regulations page,” Belford replied.