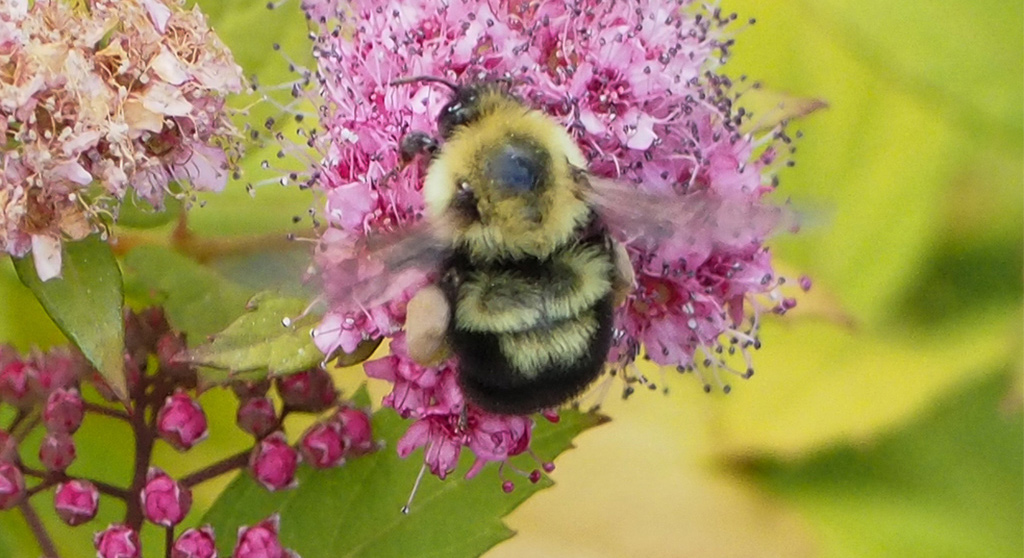 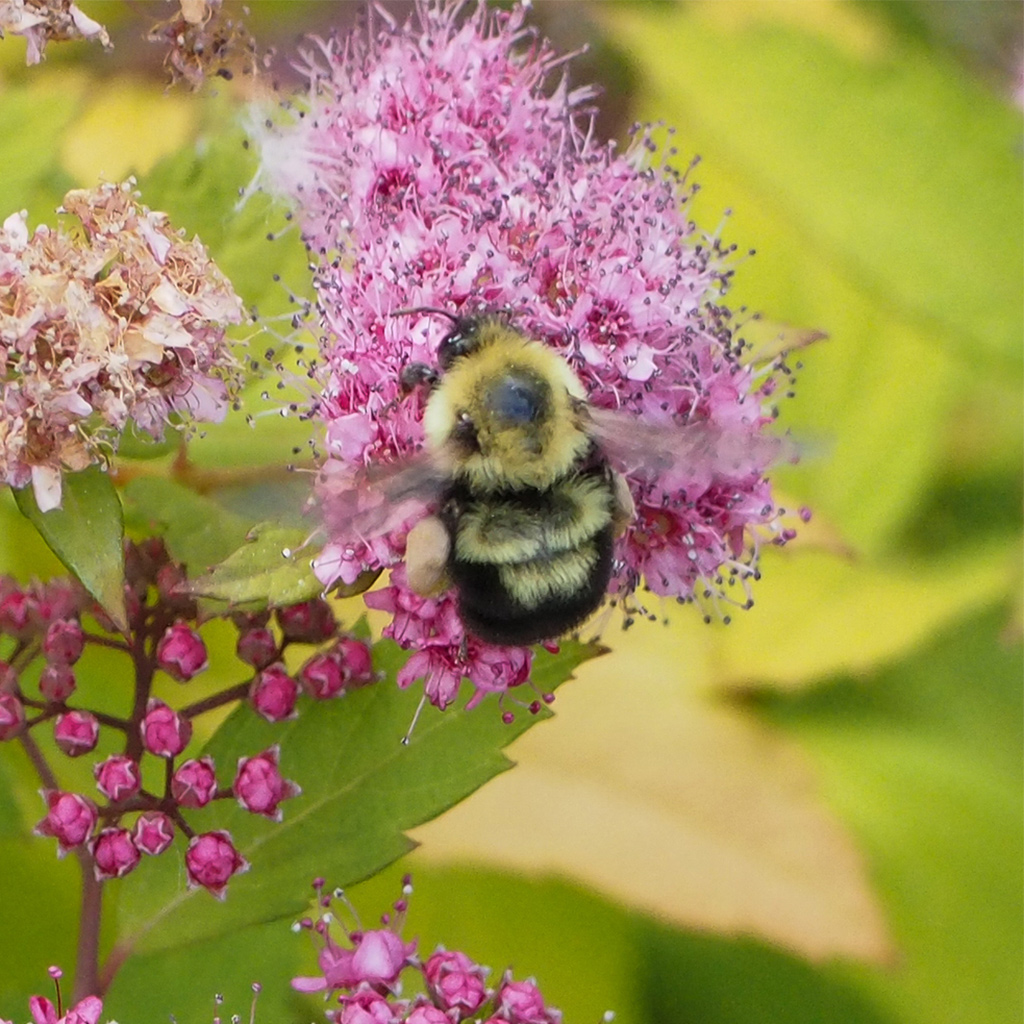 Two spots in the shape of a W give the two-spotted bumblebee its name. (Photo: Jeanine Farley)

A critter you might not immediately think of when you hear the term “wild thing” is the humble bumblebee. There are 21 species of bumblebees in the Eastern United States, and many of them can be found right here in Cambridge.

A bee that I have seen much of recently is the two-spotted bumblebee (Bombus bimaculatus). You can identify this bee by its two spots, often in the shape of a W, on its abdomen. Sometimes the two spots are difficult to see because bees have an annoying habit of moving around quickly, but if you are patient, you might be able to make out the two yellow spots on one of these gentle bees as it rests on a flower. 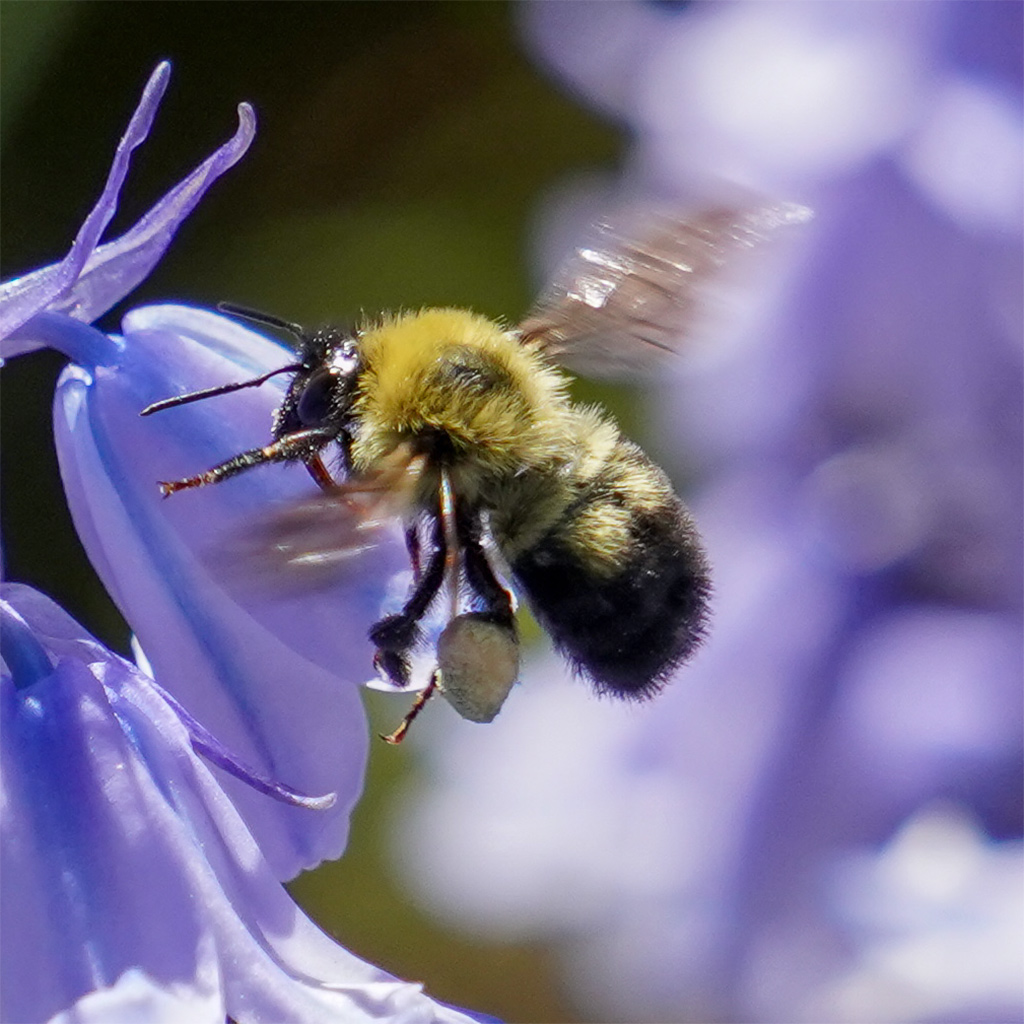 Can you see the two spots and the pollen on this two-spotted bumblebee? (Photo: Jeanine Farley)

The two-spotted bumblebee is one of the earliest bees to emerge in the spring. When a two-spotted queen first emerges, she feeds on flower nectar for energy. She finds a place to build her nest (6 to 12 inches underground) near woods or gardens. Then she collects pollen, which she stores in the nest, and finally she lays her first brood of eggs.

Bumblebees are cold-blooded, but they can produce heat by shivering. The queen bee keeps her eggs warm this way; after about four days the eggs hatch and white, grublike larvae emerge. The larvae feed on pollen (protein and fats) and nectar (sugar), which the queen provides. After about two weeks, the larvae spin cocoons, inside of which they develop into adult bees.

In two more weeks, usually in May, the first worker bees (all female!) emerge. Some forage for nectar and pollen; others guard and take care of the nest. From now on, the queen does not leave the nest. Her focus turns to laying more eggs, which the workers feed and care for.

As summer winds down and temperatures fall, the old queen and the bees in the nest begin to die. The new queens find loose dirt or rotting logs in which to hibernate over the winter. When cold temperatures arrive, all of the bees except the overwintering queens will have died. These queens will emerge in early spring to repeat the cycle.