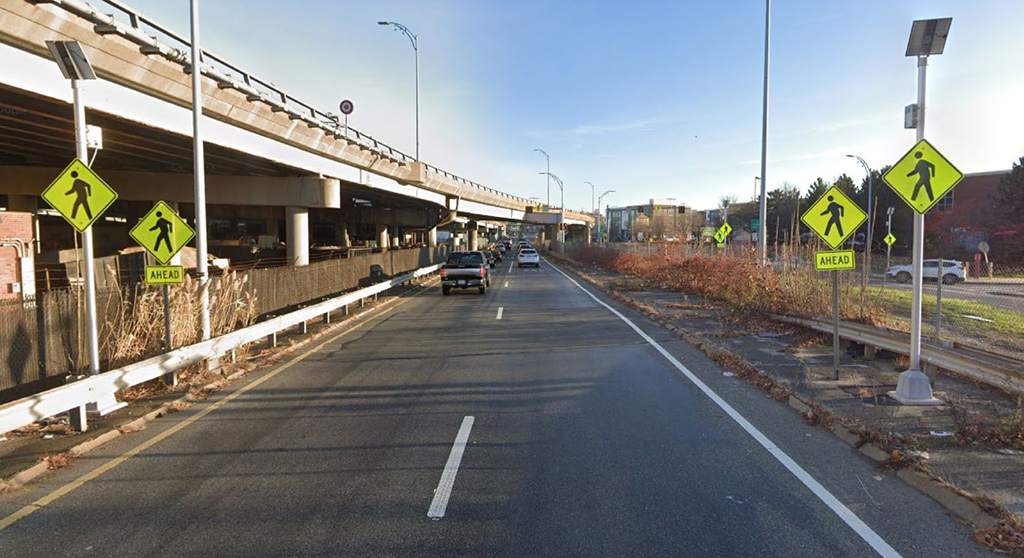 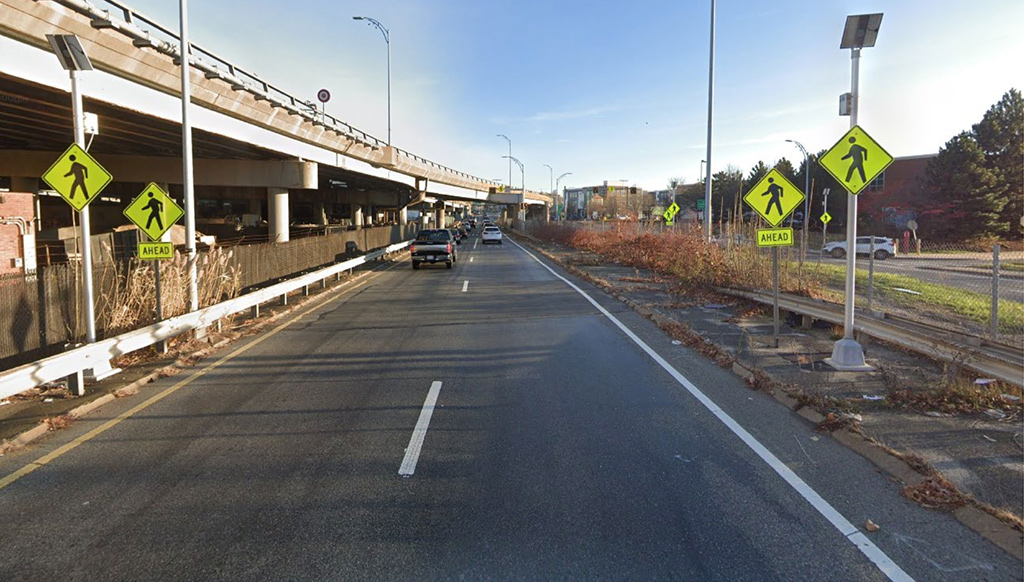 The state has already added signs to warn drivers at East Somerville’s Route 28/38 intersection of potential pedestrians ahead. (Photo: Massachusetts Department of Transportation)

Responding to a month of intense public pressure, state transportation officials have confirmed that they will prioritize safety updates to the deadly Route 28/38 intersection in East Somerville. The new plans include modernizing crosswalks with signals and a raised design, building a median on a section of Route 38 and installing traffic calming measures.

Details were released at a Wednesday public comment meeting of the Fiscal and Management Control Board, following up on changes announced at a June 21 meeting. “It was clear from the feedback there was more to be done here,” highway administrator John Gulliver said, explaining the project updates.

Gulliver listed improvements that the state Department of Transportation have already put in place to calm traffic and make the area safer for pedestrians, including additional signs and road markings and narrowing lane markings slightly.

Even with the updates, Gulliver said the intersection consists of “antiquated facilities” that call for modernization. The full project will not be complete for two to three years, he said, but a full timeline for the changes is not yet available as state transportation engineers rush to update a project that has “doubled in size and scope.”

The safety updates announced were a relief for residents who felt lives were being put at risk and that MassDOT was not responding adequately to a public outcry. A meeting for public comment on June 8 ended abruptly with many questions left unanswered after the host’s Internet connection dropped and other officials on the call were unable to regain control of the meeting.

At the rescheduled meeting Wednesday, officials sought to restore trust, announcing that some of the safety improvements outlined a week earlier at the board meeting, such as a signalized crosswalk at Blakeley Avenue and McGrath Highway, had already been implemented. Additionally, officials on the call said that MassDOT would complete a sound mitigation study that includes walls to shield neighbors from traffic noise.

Local advocates cheered the news. “It’s been an epic struggle these past few months working to push MassDOT to accelerate road safety and advance pollution mitigation in East Somerville,” tweeted state Rep. Mike Connolly, who represents the area. Further updates are expected throughout the summer as engineering plans are available for the safety updates.