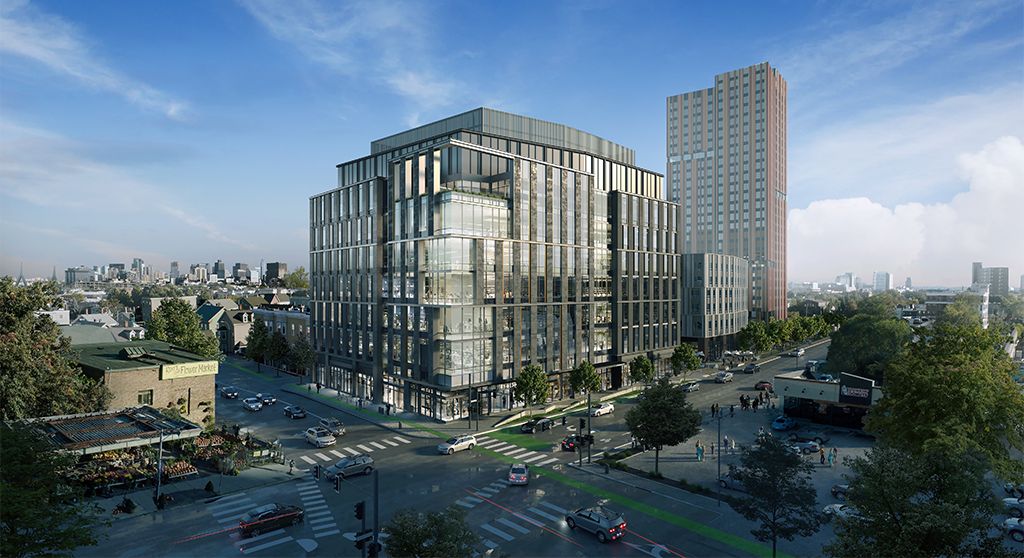 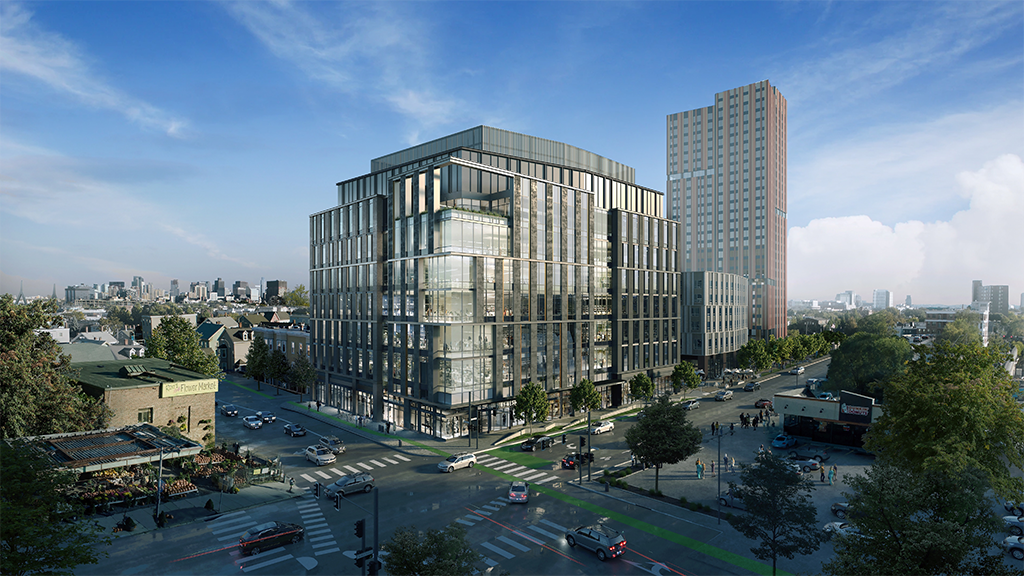 A rendering of 10-50 Prospect St., a project within a 15-acre development underway called USQ. (Image: US2)

A 15-acre project called USQ got a groundbreaking ceremony Wednesday, the formal start of years of building that will bring towers with labs and offices, residences and retail along with open space and signal “the return of Union Square as the center of commerce for Somerville,” said Greg Karczewski, president of developer US2.

The morning event took place in a clean, white tent off Prospect Street that was approached from a runway. Inside were applauding guests, a band, arepas and doughnuts from nearby eateries and plenty of fellow developers and city officials, while surrounding the tent was a busy construction site, with cranes, workers in hard hats and sun-baked dust.

The Wednesday ceremony was focused on 10-50 Prospect St., a four-acre site that alone will hold three lab and innovation buildings, 450 apartments and retail and arts spaces, developers said. It is expected to begin occupancy in the winter of 2022.

USQ has been roughly a decade in the making, and its developer arrived seven years ago. 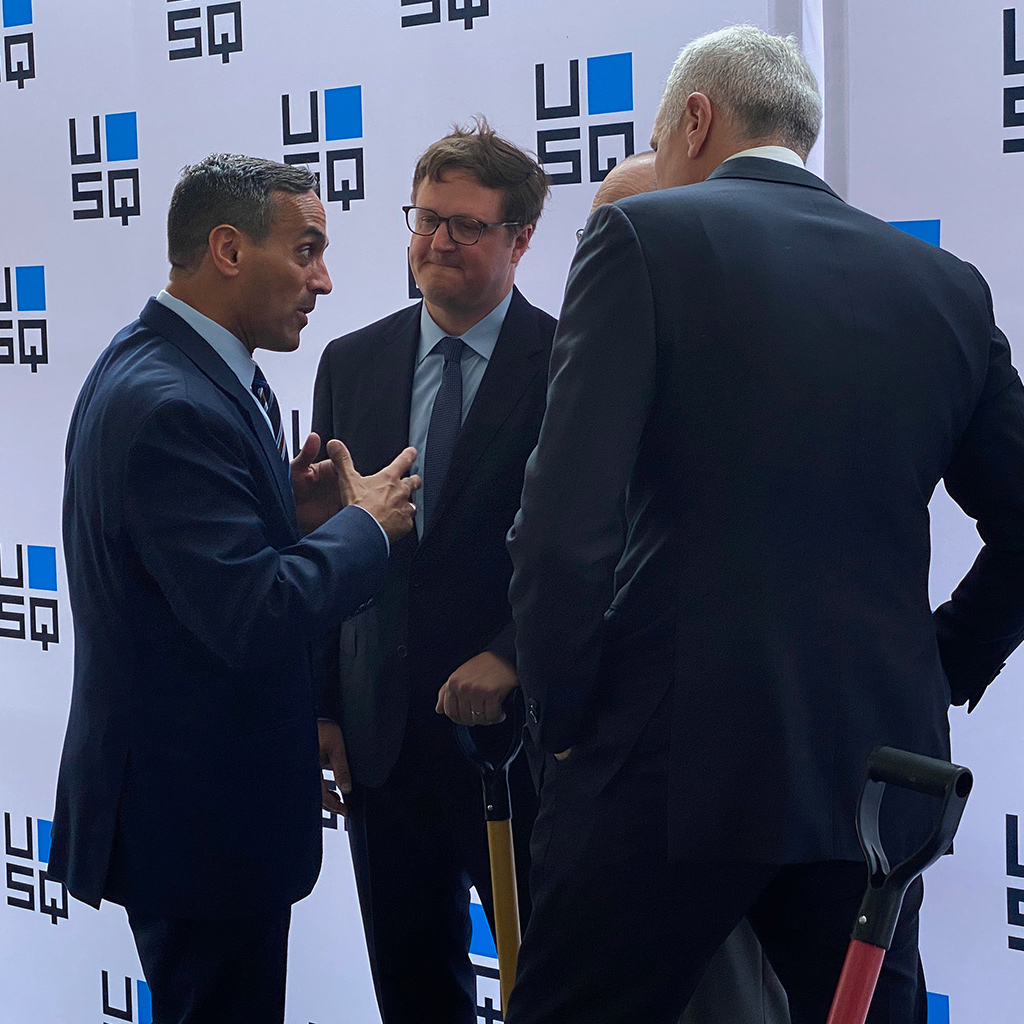 “In 1852, the first streetcar began operating between Union Square and Harvard, and by the early 1900s nearly 100 streetcar stops occurred daily in Union Square, a testament to what had grown into a bustling economy. Union Square became the economic engine of Somerville,” Karczewski said.

The arrival of car culture diminished Union Square’s importance commercially, but it will be returned in part by replacing “the streetcars of the 1900s with light rail,” Karczewski said.

Karczewski said US2 is already being courted by life sciences companies eager to snatch up space in Somerville, likely because Cambridge has become crowded with competitors, driving prices to a premium. BioMed Realty, which owns much of Cambridge’s Kendall Square biotech real estate, has meanwhile been developing a hub in Somerville’s Assembly Square.

“Instead of having glassmakers, brickmakers and copper tube manufacturers driving local commerce, [we will] fill the square with modern innovators, technology companies, artists and new life sciences discoveries,” Karczewski said. 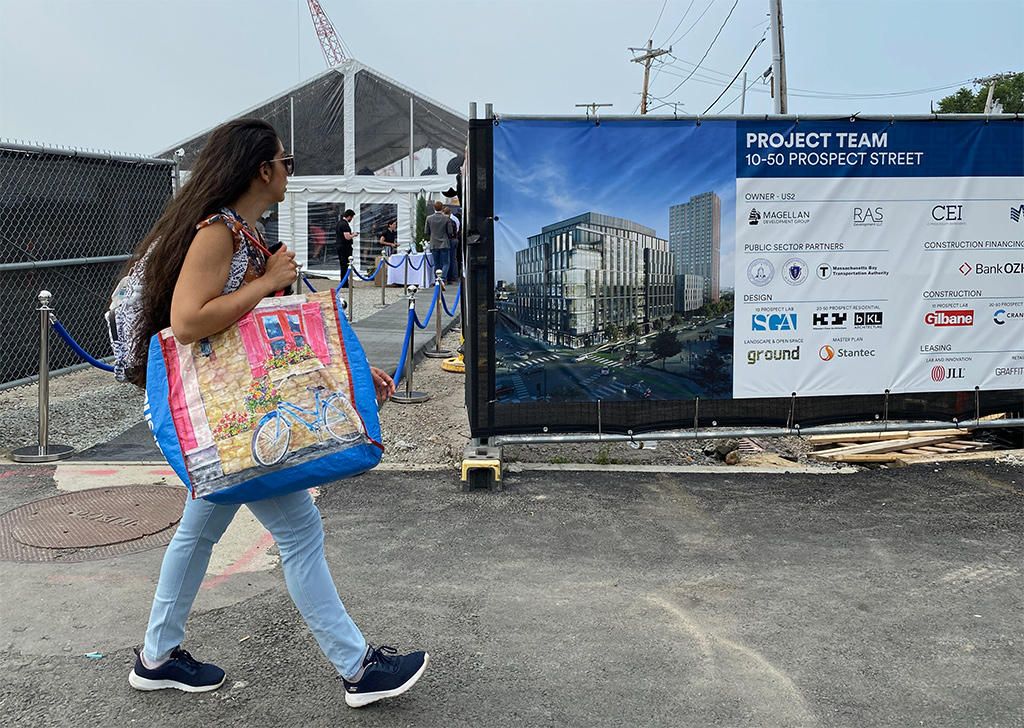 A pedestrian passes by the tent for the Wednesday groundbreaking ceremony, where in 18 months developers expect to start filling lab space with workers. (Photo: Marc Levy)

Control of its financial destiny

Mayor Joe Curtatone, who will leave office next year with US2 as his legacy – in March he opted out of a reelection run after serving nine terms since 2004 – said the development was “crucial.”

“We deemed a long time ago that we need control of our financial destiny – a city of only 4.1 square miles and more than 81,000 people, the most densely populated city in New England – but we had no plan. We had no plan to leverage potential growth done the right way [and] reinvest it back into the community,” Curtatone said. “We knew we had to do it, and that’s happening.”

There was no greater expansion in the state’s innovation economy happening anywhere than in Somerville, and “it’s not by accident,” Curtatone said.

US2 is intended to be a creative center as well, officials said, though a new wave of development is uprooting some longer-term residents and artists. US2 is also meant to be active 24 hours, Karczewski said, which is the case almost nowhere in Cambridge; if anything, the area’s nightlife began retreating well before the coronavirus pandemic.

But speakers on Wednesday argued that Somerville was special, starting with the mayor’s reminder that President Barack Obama had mentioned the green line extension project – with its Union Square spur – in his March 2014 budget address. (Obama lived in Somerville’s Winter Hill neighborhood while attending Harvard Law School.) Len O’Donnell, head of USAA Real Estate, one of the companies making up US2 with Magellan Development, RAS Development and Cypress Equity Investments, remarked that “Projects like this don’t happen in most cities.”

“We rarely get to be involved in something where a city has a plan, has a vision,” O’Donnell said. “We’re usually trying to find a way to sort of force through what we think makes sense. And instead the opposite happened here.”

Curtatone also said that the deliberateness of Somerville’s planning process could avoid the worst of the gentrification trap that many believe Cambridge has fallen into – in which the benefits of commercial development are always chasing what it costs the community, such as by bringing in the 500 workers expected for USQ biosciences towers who will earn enough to pay rents beyond what many current residents can afford. “There is a way, and we need to be as innovative and bold as we are in planning our growth to manage the impacts delivered on you and anyone else who wants to be part of this,” he said.