‘Snake Eyes’: A hiss for taking itself so seriously, fighting against ‘G.I. Joe’ action-figure origins 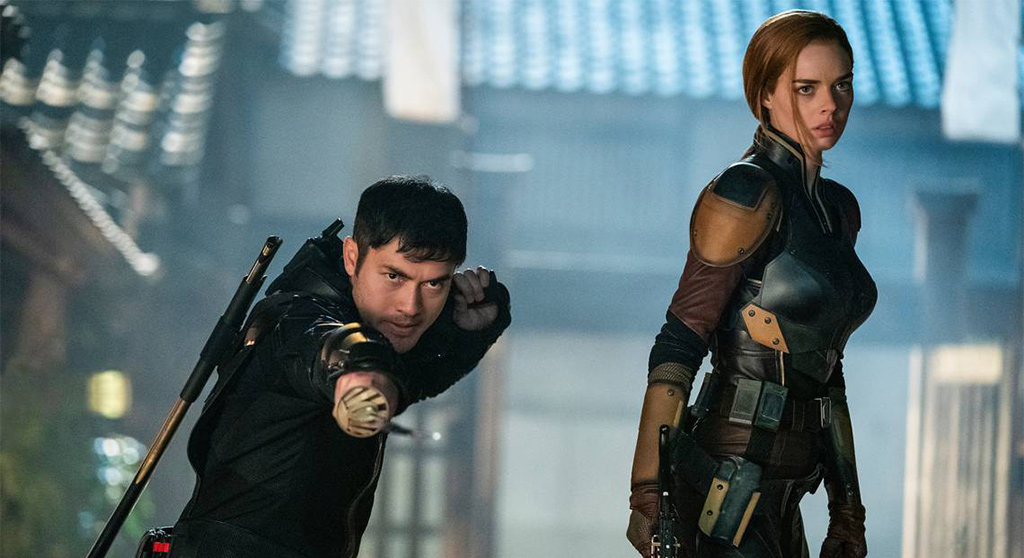 ‘Snake Eyes’: A hiss for taking itself so seriously, fighting against ‘G.I. Joe’ action-figure origins

The latest attempt to adapt the lore of G.I. Joe into something cinematic results in little more than a hackneyed and lazy grab at franchise building. “Snake Eyes,” despite the best efforts of stars Henry Golding (“Crazy Rich Asians”) and Andrew Koji (“Warrior”), can’t elevate itself from the low bar set by director Robert Schwentke. Rather than aspire to anything fun and energized, the film tries to play it straight and serious – a tough feat, considering it’s based on an action figure.

We meet Golding’s Snake Eyes as a child, watching his father get murdered. Later in life he’s invited in by an ancient Japanese clan called the Arashikage after he saves the life of an heir. He’s taught the ways of the ninja warrior and begins to find a sense of home, but his honor and allegiance are tested.

Readers may assume it’s hyperbole to say poor direction has totally sabotaged what otherwise might’ve been a fun and breezy action flick. Make no mistake: While the storyline of “Snake Eyes” is certainly weak, even that might’ve been forgivable had Schwentke’s direction held any sense of urgency or, even more crucially, consistency. It hardly matters how good the fight choreography is if the director doesn’t know how to shoot it, like when directors for musicals don’t understand how to use the stage they’ve set (think Tom Hooper for “Les Misérables”) and instead shoot primarily in closeups. “Snake Eyes” should have used the talents of Koji and Iko Uwais (“The Raid: Redemption”) and the work of stunt choreographer Kenji Tanigaki ,whose work can be seen in the Japanese adaptations of the “Rurouni Kenshin” series. But rather than pull a wide shot to see the practical martial arts and many sequences of hand-to-hand combat – often in increasingly precarious scenarios – Schwentke instead relies on closeups and quick edits. The aim, presumably, is to create a frenzied and highly energized sequence in which the audience is dizzied by the amount of action taking place. Instead, we’re simply dizzy.

It’s a shame. Based on the source material alone, the film was never going to be excellent, but the cast and the lavish sets are operating on a separate level than the director (and even the screenplay). Golding is clearly poised to be one of Hollywood’s next leading men, and in films such as “Crazy Rich Asians’’ and “A Simple Favor” he applied an old-school charisma and dashing looks to suave effect, playing the romantic interest for audience members to latch on to. In “Snake Eyes’’ he steps slightly out of that norm to play a character burdened with rage, and if there’s a knock against the performance, it’s simply that he never fully seems comfortable embodying someone as intimidating as the character is supposed to be.

Koji, on the other hand, should spark notice with this role – if his leading status on HBO’s “Warrior” wasn’t already enough to earn him the attention he deserves. With formidable physicality and a screen presence that nearly overshadows Golding in the leading role, Koji brings a depth to the film that, frankly, it didn’t deserve.

The end result hardly justifies the film’s existence, aside from allowing some actors a moment to shine. Sloppily filmed and an obvious cash grab, especially with an eye-roll-inducing final act that all but promises (if the filmmakers are lucky) a sequel, “Snake Eyes” is yet another example of failure to understand what is enjoyable about a genre. We’re not going to see “Snake Eyes’’ for its tonal sobriety and somber atmosphere. There are moments when it seems as if the film realizes the wink and the nudge that should adorn the story beats, such as when an antagonist-turned-momentary-ally fights in stilettos, enormous CGI snakes ensnare our hero or two men duke it out on top of moving cars. Instead, appallingly, those moments quickly turn out to be just as self-serious as the rest.