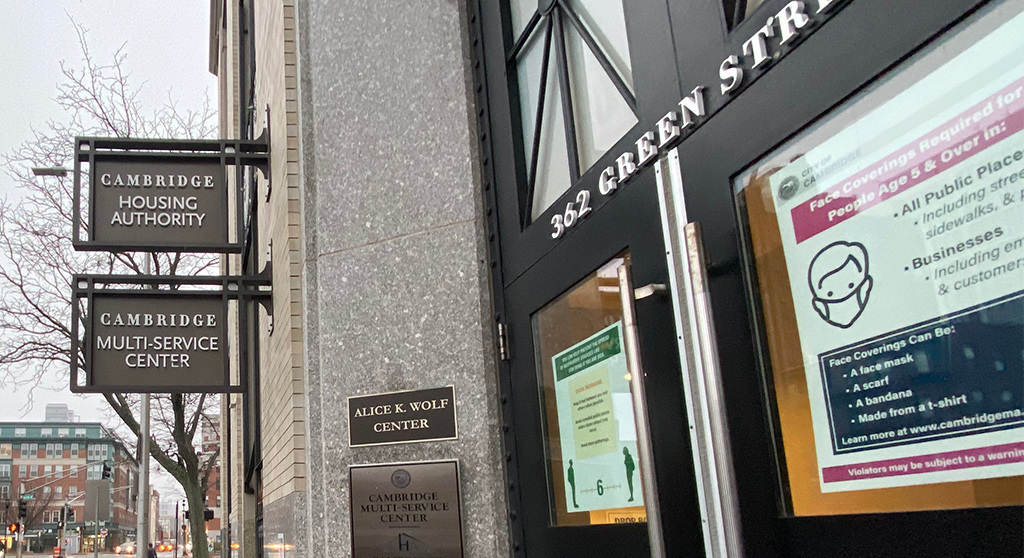 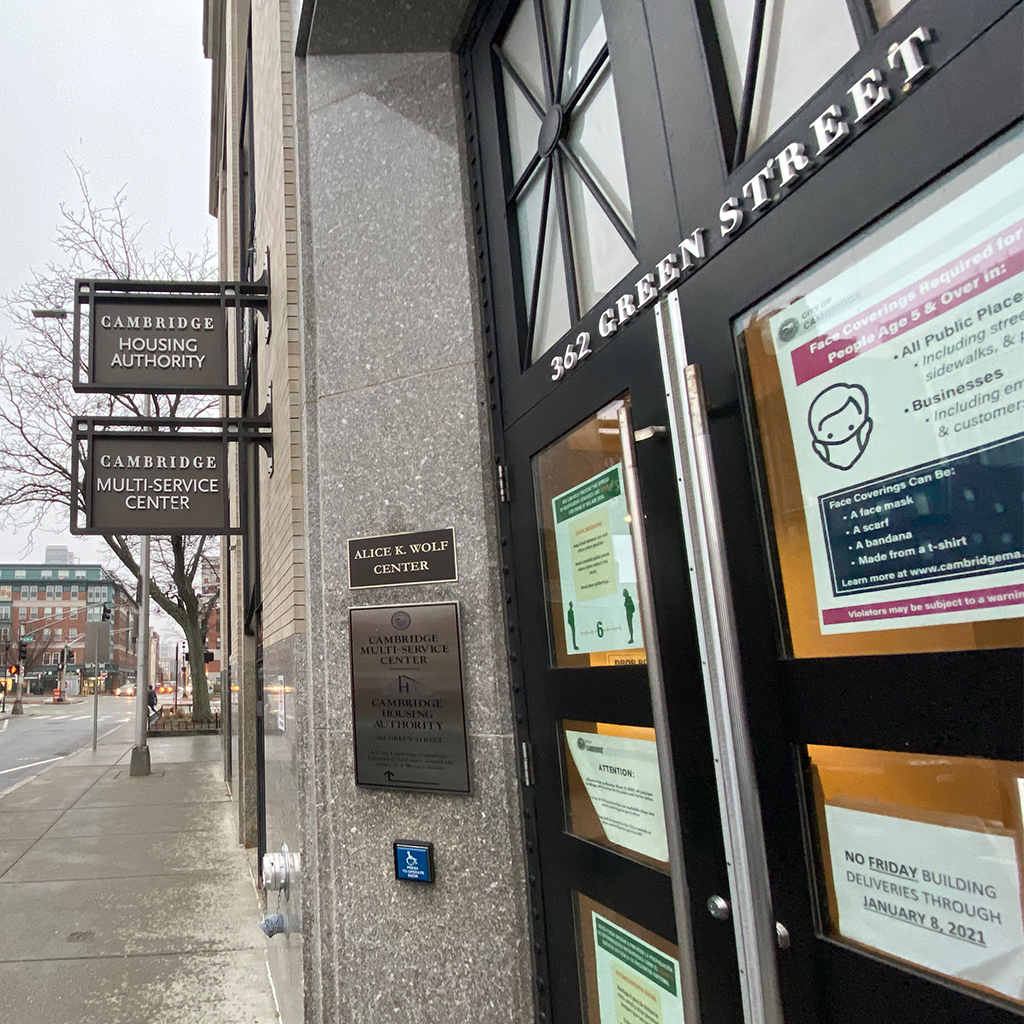 The Cambridge Housing Authority may require Covid-19 vaccinations for those entering its offices near Central Square. (Photo: Marc Levy)

Worried about the rise of the highly contagious Delta coronavirus variant, the Cambridge Housing Authority is “strongly considering” requiring employees to be vaccinated against Covid-19 when the agency reopens its offices fully in September, executive director Michael Johnston said Wednesday. Some private employers such as Google are imposing a mandate, and on Thursday the industry group representing most Massachusetts hospitals, including the two in Cambridge, said their members had agreed to adopt a vaccination requirement.

The vaccination mandate endorsed by the Massachusetts Health & Hospital Association leaves it up to individual members as to when and how to adopt a policy, though. That left Cambridge’s Mount Auburn Hospital and Cambridge Health Alliance, both association members, free to impose conditions and introduce some uncertainty. “We are evaluating mandatory vaccinations at this time,” Cambridge Health Alliance spokesperson David Cecere said Thursday.

Mount Auburn is part of the Beth Israel Lahey Health system, which announced June 24 that it would require all staff to be vaccinated if and when the Food and Drug Administration gives full conventional approval to the vaccines. They are now allowed under an emergency use approval. Beth Israel chief executive and president Kevin Tabb said in explaining the decision to mandate vaccinations that “some of our staff would feel more comfortable getting a Covid vaccine after it has been formally licensed” by the FDA.

At the Health Alliance, at least 76 percent of the staff is fully vaccinated, Cecere said. The figure for Mount Auburn is about 85 percent, including vaccinations outside hospital vaccination clinics.

Meanwhile, city government won’t change its policy of not requiring municipal employees to get vaccinated although the city “strongly encourages” it, city spokesperson Lee Gianetti said Friday by email. As he said previously, Cambridge doesn’t ask workers if they’re vaccinated, so the city doesn’t know what percentage of its workforce has been immunized. Gianetti was asked how many employees are now out because they are infected with Covid-19 or were exposed; he didn’t answer.

At the housing authority, two workers, both unvaccinated, are at home recovering from Covid-19 after several months when there were no cases, Johnston told CHA commissioners Wednesday. Other employees who had contact with the infected workers have been sent for testing, he said. And one resident of an authority development for elderly or disabled tenants has a “breakthrough” infection, Johnston said – of a woman who received two shots of the Moderna vaccine during a campaign to immunize public housing residents in February.

“It’s a little alarming the numbers coming back up,” Johnston said. He said the workers aren’t seriously ill and the resident “is doing very well, and I’m told that the symptoms are very, very minor.”

“The safety of our employees and residents is very important for us and for me,” he said. As of now “we have very few [employees] not vaccinated” according to what he described as a voluntary anonymous survey.

The city’s three nursing homes and one of its four assisted-living centers bore the heaviest burden of the pandemic in its early days, and long-term care facilities still account for about 76 of the 123 Cambridge residents reported to have died of Covid-19, or about 61 percent. The number of cases and deaths dropped sharply weeks after long-term care residents and staff began getting shots in January.

In nursing homes, a lower percentage of employees than of residents are vaccinated, according to data reported by the Centers for Disease Control and Prevention. The difference applies nationally as well as in Cambridge, although Cambridge vaccination rates are much higher than the national percentages.

The latest CDC figures, for the week ending July 18, showed 94 percent of workers at Neville Center at Fresh Pond had been fully vaccinated; 87 percent at Sancta Maria Nursing Facility; and 81 percent at Cambridge Rehabilitation & Nursing Center. The figures were far higher than the national figure – 59 percent – reported federally.

Whether or not nursing homes mandate vaccination for employees, the Massachusetts Department of Public Health is giving them – and workers – an incentive to increase vaccination rates. The department requires nursing homes to administer weekly tests to workers who are not fully vaccinated for Covid-19, while those who are fully immunized get tested every two weeks.

All three nursing homes have not met the staff testing requirements at various times since March. The health department can freeze admissions to facilities that don’t meet the standard for two or more consecutive testing periods, generally two weeks, but the Cambridge nursing homes hadn’t failed consecutive periods as of two weeks ago. The health department no longer reports the staff testing results publicly.

As an incentive, the state reimburses nursing homes for testing if they meet the requirements.

Older teens from 16 to 19 years old still lagged behind other age groups, with 46 percent fully vaccinated compared with 45 percent the week before. People in their 20s also trailed; their vaccination rate stayed at 63 percent. People under 18 and those in their 20s continue to account for most of the new infections in the city. A week ago the health department said cases in the city were rising again, with 83 new cases between July 1 and July 20. Of the new infections, 15 were in children under 12 not eligible to be vaccinated, and 35 were in people who had been fully vaccinated.

An outbreak resulting from Fourth of July celebrations in Provincetown continues to grow, with 832 cases reported Thursday. Fully vaccinated people account for 74 percent of the infections. Provincetown is now requiring people to wear masks in public spaces indoors.

The Cambridge Public Health Department urged residents to wear masks indoors even if vaccinated “in situations where transmission is likely and around unvaccinated people, including children.” Since then, the CDC has recommended that people mask up indoors in “public settings” regardless of vaccination status in places where transmission has risen above a certain level. Neither Cambridge nor Middlesex County meets that definition.

Coronavirus cases are rising again for residents, including ‘breakthrough’ cases in the vaccinated (corrected)