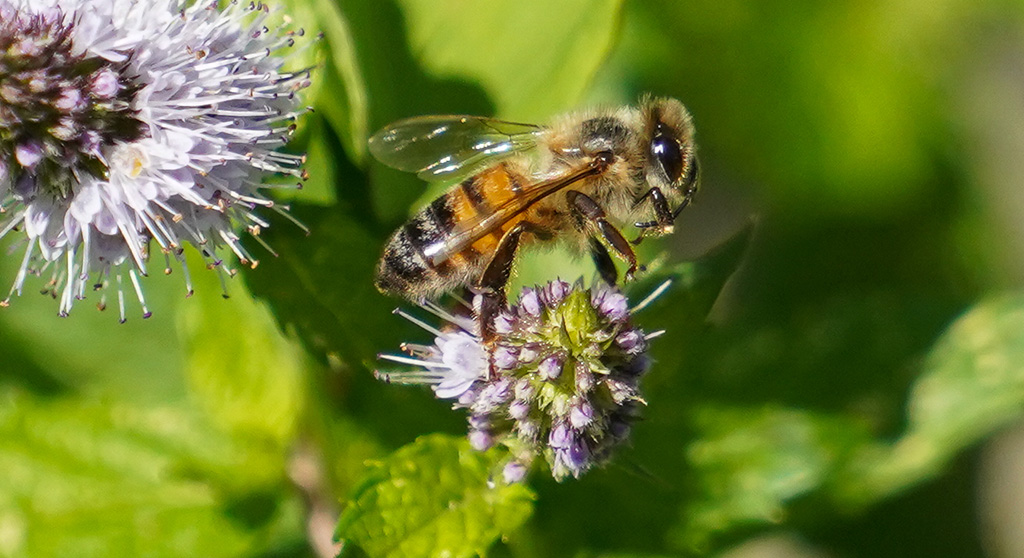 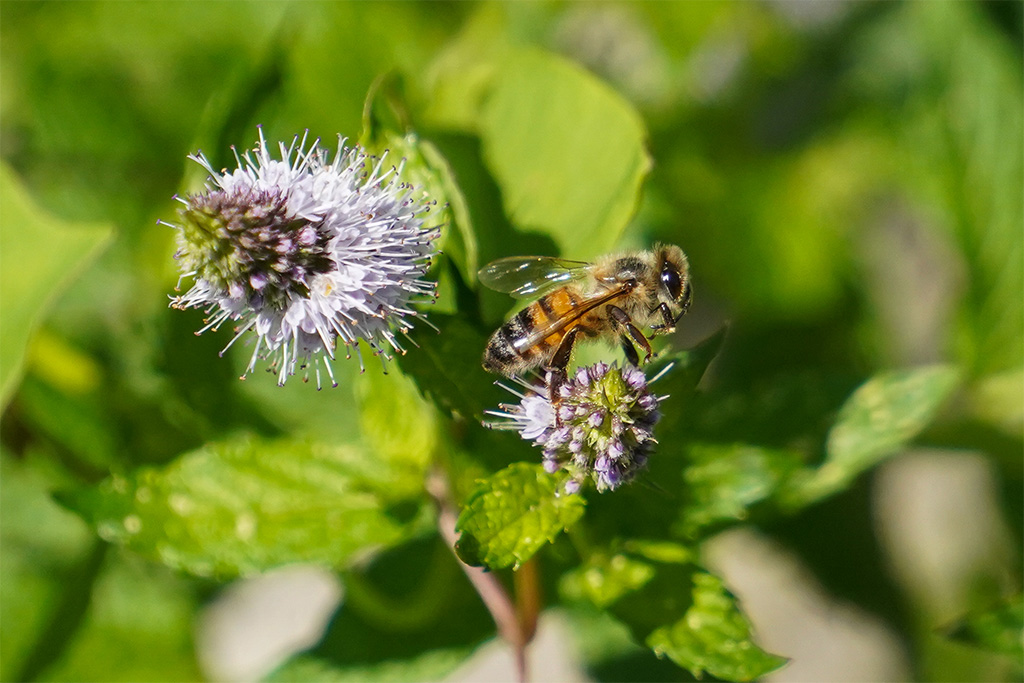 Honeybees! Everyone knows honeybees. You have seen them all your life. But why is a column about urban wild things featuring honeybees? Don’t people raise honeybees? Aren’t they domesticated? Well, yes and no. Honeybees, like backyard chickens, are raised in our urban environment, but – unlike backyard chickens or other domesticated animals – they forage on public and private lands. In this respect, honeybees are more like wild bees.

As most people know, honeybees are farmed. Beekeepers raise them for their honey or to pollinate agricultural crops. But they are not native to North America. Early colonists brought them to the United States from Europe in the 1600s because they were important for their honey and beeswax.

Honeybees are generalist feeders, which means they forage on just about any plant. They particularly like invasive species such as Japanese knotweed. Studies have shown that competition from managed honeybees harms native plant reproduction. This is largely because honeybees forage on invasive plants, and by pollinating these species, honeybees increase their seed production. Just google “Japanese knotweed honey” and you will find many articles from beekeepers about how important and beneficial Japanese knotweed is to honeybees.

Honeybees are very good at collecting pollen and returning it to their hives, but because they are so efficient, they transfer little pollen to the flowers they visit. They are much less effective at pollination than wild bees, who transfer larger amounts of pollen to the flowers they visit. Where honeybees live in high numbers, they push out native bees, making it difficult for native plants to reproduce because of lack of pollen transfer. 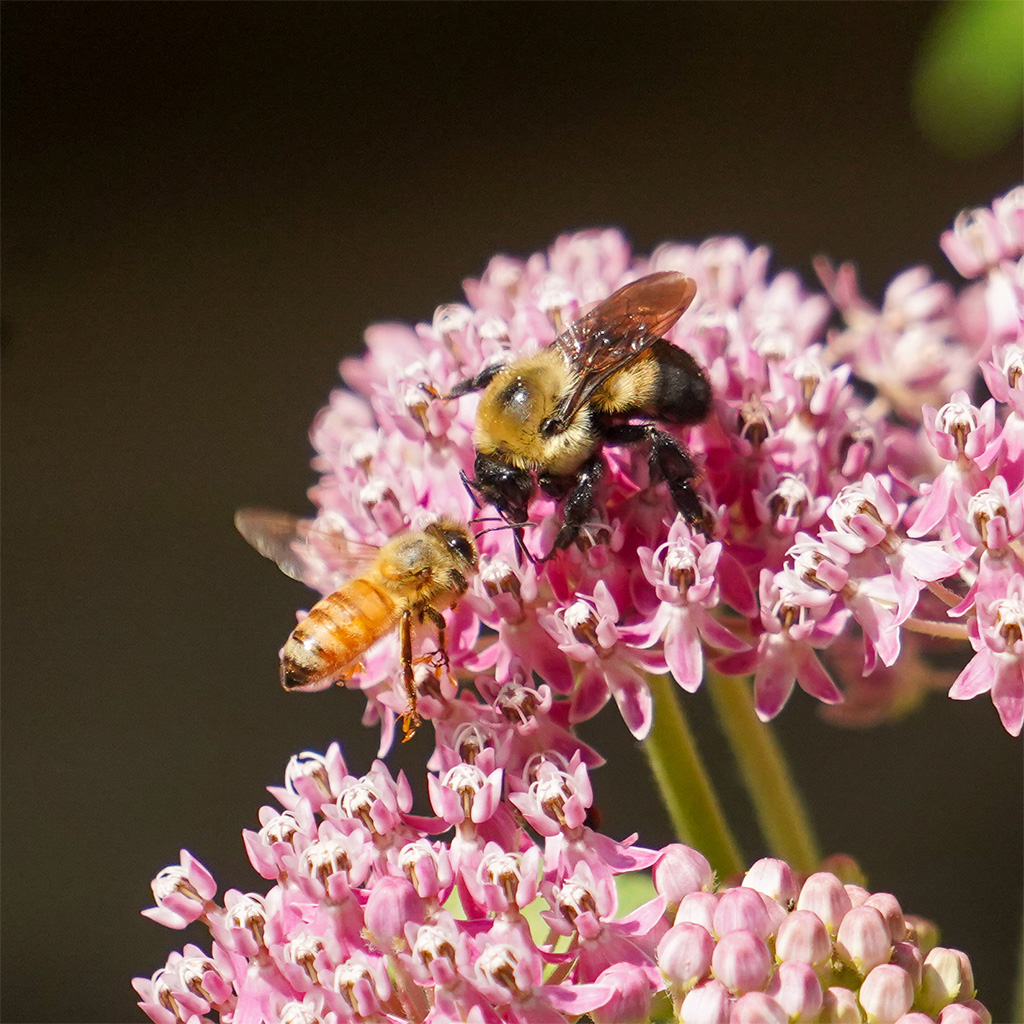 Honeybees can transmit diseases to native bumblebees when they interact on shared flowers. (Photo: Jeanine Farley)

While honeybee are generalists, native bees are often specialists. Some use pollen from only one species of plant. Some native bees specialize, for example, in squashes, pumpkins, gourds or sunflowers, which happen to be plants native to North America. Other native plants, such as tomatoes and blueberries, require buzz pollination, which only native bumblebees can do. If bumblebees are pushed out by honeybees, our native plants will be underpollinated because honeybees do not pollinate as well as our native bees.

Honeybee populations don’t just displace native bees from flowers; they also hurt native bee reproduction. Native bees that compete with honeybees have lower reproduction rates, and they are smaller in size. When honeybees are removed, native bees return to plants that had been previously monopolized by honeybees. Competitive pressure from honeybees is greatest in areas where honeybees are invasive, such as North America.

Besides reducing native plant populations, honeybees transmit diseases to native bees when they interact on shared flowers. When a honeybee lands on a flower, it can leave behind viruses, bacteria or parasites in its feces. These pathogens are passed on to bumblebees, for example, that forage on the same flower.

According to the USGS, while honeybees are important in the pollination of some crops, “honeybees are also significant competitors of native bees and should not be introduced in conservation areas, parks or areas where you want to foster the conservation of native plants and native bees.” According to the journal Scientific Reports, “Beekeeping in natural areas appears to have lasting, more serious negative impacts on biodiversity than was previously assumed,” because honeybees reduce the number of wild native bees and impair their ability to pollinate native species. 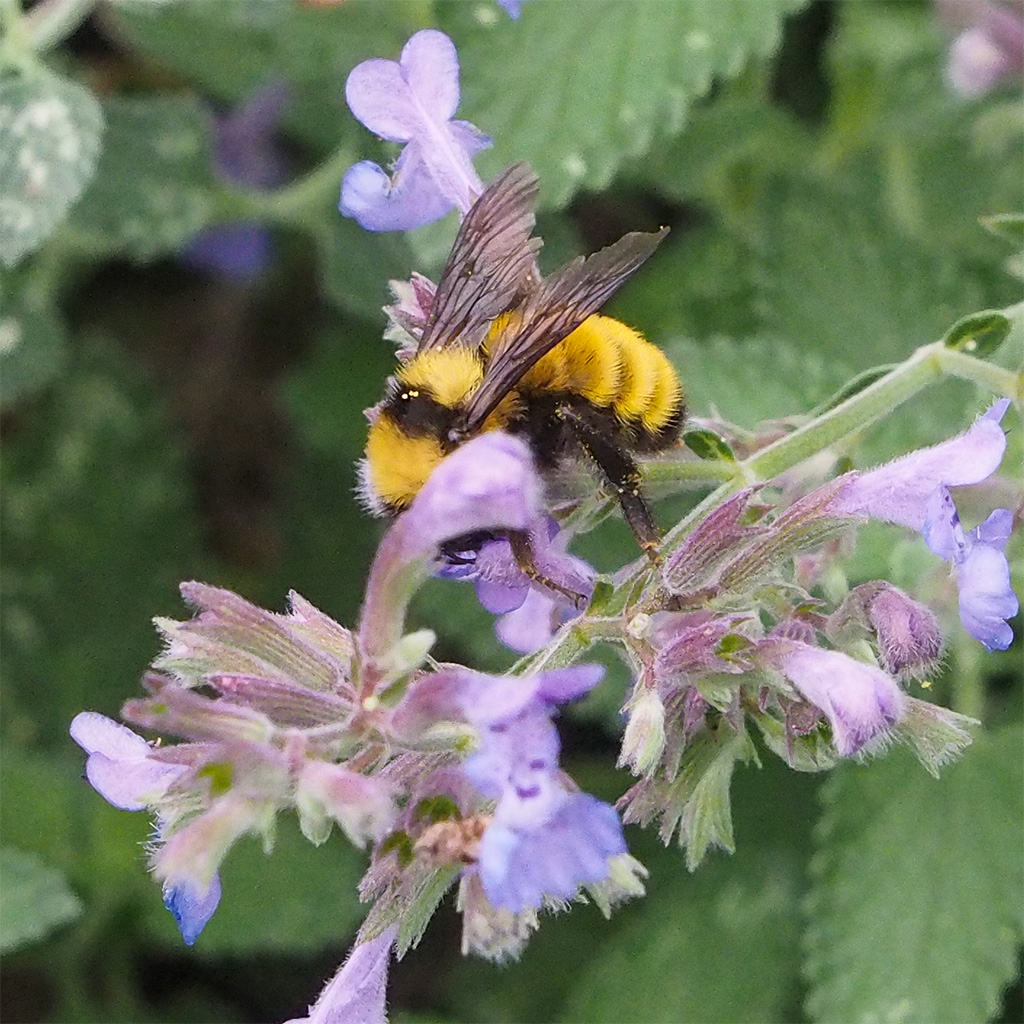 The Golden Northern Bumblebee (Bombus fervidus) is an uncommon bumblebee, native to our area, that is thought to be in decline. (Photo: Jeanine Farley)

In 2019, for example, a Golden Northern Bumblebee was photographed at Somerville’s Baxter Park – as documented on iNaturalist, a nature app from the California Academy of Sciences and the National Geographic Society. The Golden Northern Bumblebee is an extremely good pollinator but uncommon, and its numbers are thought to be declining. Recently, I walked along the river where the bee had been spotted. The bushes were covered in honeybees – covered! I saw hardly any bees other than honeybees, something that had not occurred during my visits in previous years. The only conclusion I could draw from this was that more people than ever are raising honeybees in the area. Sometimes I get worried for our native bees, and this was one of those times.

Honeybees clearly benefit people because they pollinate many important agricultural crops, and we all need to eat. The benefits of honeybees may outweigh the damage to native ecosystems in agricultural settings; but in cities such as ours, careful consideration to the harm these bees can bring should be of paramount concern before honeybees are introduced.