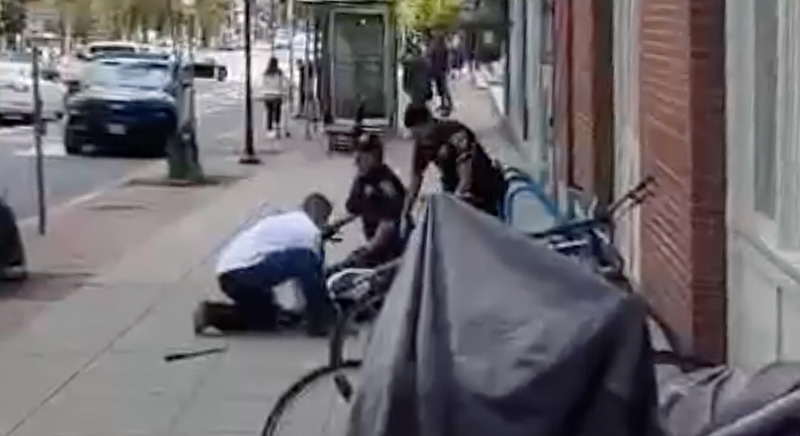 A passerby helps two Cambridge Police Department officers make an arrest Sunday in Central Square in part of an incident caught on video.

Police had more information Tuesday on an arrest caught on video over the weekend, but its report all but ignores an aspect debated by city councillors: the passerby whom police allowed to take part.

Officers went to Central Square on Sunday when the manager of a pharmacy reported that candles had been shoplifted, and they found a suspect based on the manager’s description. The suspect was stopped near the store, opened his backpack and revealed the candles, said Jeremy Warnick, director of communications and media relations for Cambridge police.

But he refused to cooperate with a further search and resisted when “for safety purposes, the officers intended to briefly detain the defendant with handcuffs, search him and issue him a summons for the shoplifting,” Warnick said.

The man “swung his fist at and struck the officers,” which led to the officers using their pepper spray and a baton “to gain compliance and avoid further injury to the defendant and the responding officers.”

The video posted Monday by city councillor Quinton Zondervan captures only this part of the incident and ends just before the suspect is handcuffed. The report offered by police in initial response to City Council concerns is also incomplete, though acting police commissioner Christine Elow said department policy would be followed to provide a “comprehensive internal review” by the department’s Professional Standards Unit. It would investigate whether the actions taken by the officers were reasonable and justified within department policies; state and federal legal standards; and state guidelines and training.

“Professional Standards will look at the totality of the incident. As a department, we are always seeking to evaluate where and how we can do things more effectively and/or differently, if appropriate,” Warnick said by email the day after the report to councillors. The response came after being asked specifically about the involvement by the passerby in an arrest.

The accounting given Tuesday said that “during the altercation, officers realized the defendant had a switchblade knife” that was later recovered by an officer, but does not say when or how. The officers were “evaluated at a local hospital for injuries to the face and body” without saying what kind of injuries.

“The officers are both off-duty until at least the end of the week recovering from their injuries,” Warnick said, later clarifying that all injuries were from the suspect’s hands, not the switchblade, which can be seen in the video being kicked away by an officer.

Police said the suspect is Dean Robinson, 58, of Boylston Street in Boston, who has a warrant out of Roxbury District Court for failure to register as a sex offender. The charges date back to 1985 and 1991, for indecent assault and battery on a person 14 or older and assault with intent to commit rape, respectively, according to an online public records search.

The suspect was charged with assault and battery on a police officer, shoplifting, carrying a dangerous weapon and wanton destruction of property, though what property was destroyed was not explained Tuesday.

Also, though Zondervan asked online and at Monday’s meeting about the man in a white shirt who joined in on the arrest, leading to discussion with councillor Marc McGovern about the man’s identity and purpose to police, the Tuesday report said only that “a passerby tried to help the officers during the response.”

At one point, the passerby is close to the suspect and looking like he’s about to strike at the upper body with his own baton while the officers hang back. When the man identified by police as Robinson is on the ground, the passerby rushes forward to help officers secure him.

Pressed on the issue, Warnick referred to a state law that says sheriffs “may require suitable aid in the execution of their office in a criminal case, in the preservation of the peace [or] in the apprehending or securing of a person for a breach of the peace”; he did not make clear whether police officers have the same ability, say what constitutes “suitable” aid or describe how the officers made that determination during their altercation with the suspect.

Updated on Oct. 20, 2021: State laws around “sheriffs” can apply to police officers, Warnick said, though he did not supply the statute saying so. And he clarified that the charge of wanton destruction of property against Robinson “pertained to officer equipment and apparel.”