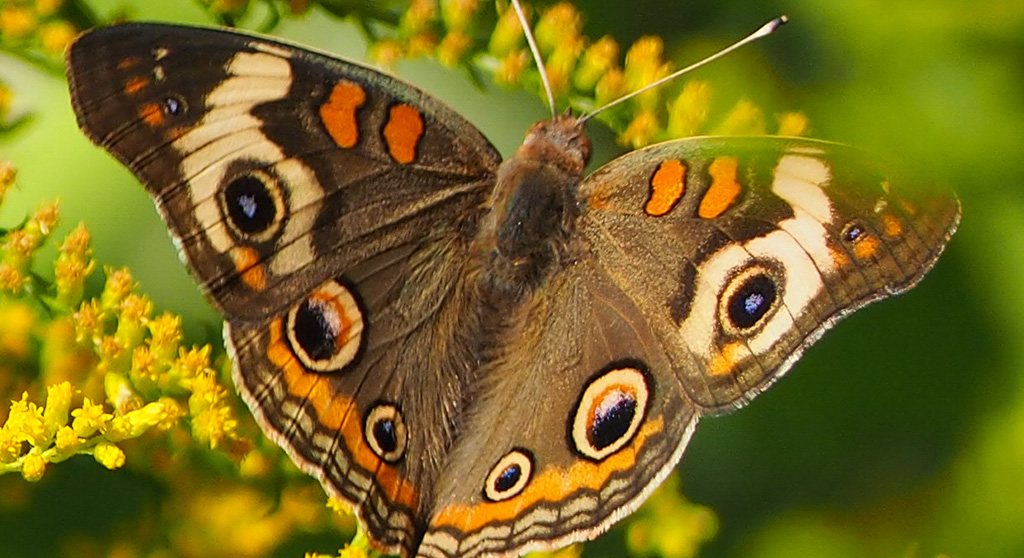 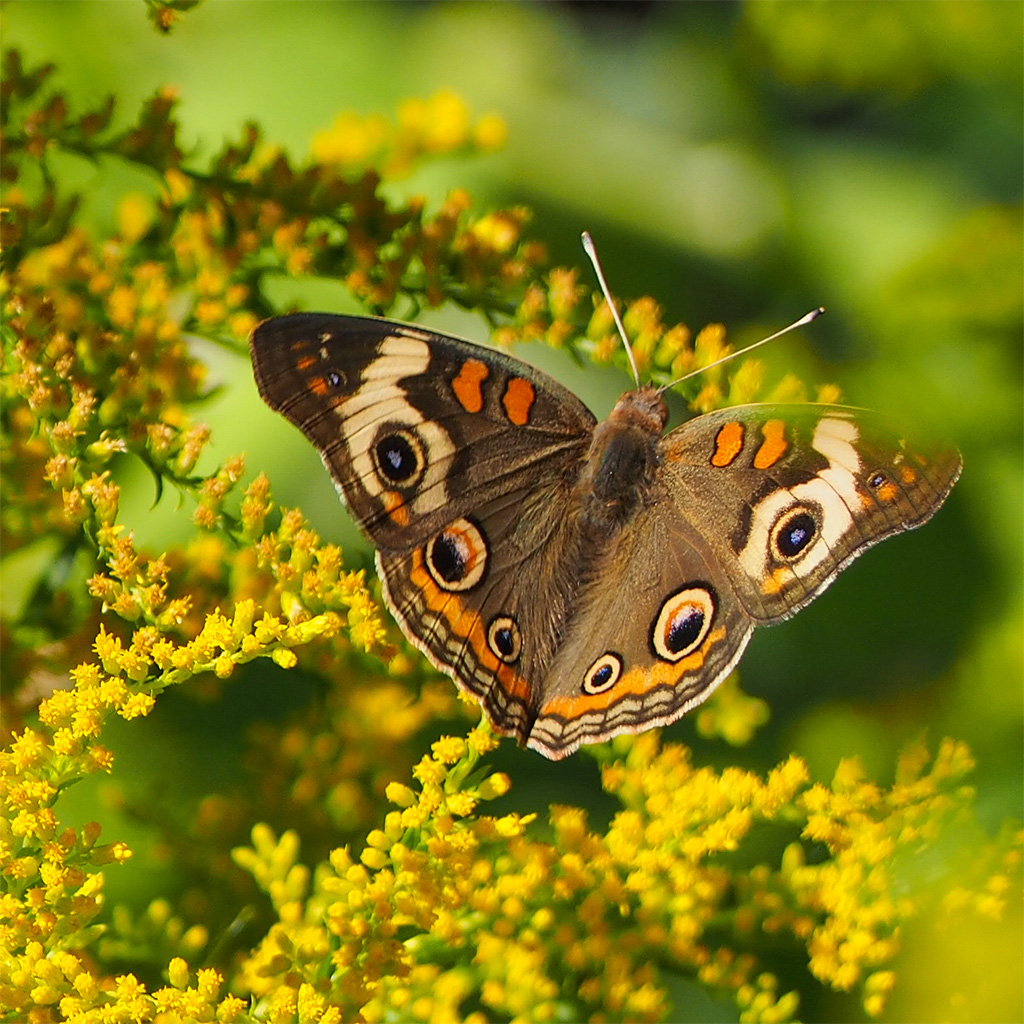 A common buckeye butterfly spotted near Assembly Row in Somerville. These butterflies are sometimes present in our area as late as November. (Photo: Jeanine Farley)

If you are lucky, you might still be able to spot the common buckeye (Junonia coenia) butterfly, which sports brown and orange fall colors, because it sometimes stays in our area through November. This butterfly is from the family of brushfoot butterflies (so named for the bristles on its legs) found east of the Rockies. It’s another one of those butterflies with eyespots.

Despite its name, the common buckeye is not really that common; in fact, its numbers vary considerably from year to year and in some it is not abundant at all. These butterflies do not migrate the way monarchs do: In the spring, buckeyes shift their way north to our area gradually as the weather becomes too warm in the South. They often arrive in June, but sometimes arrive as early as May or as late as July. In the fall, they work their way South as the weather cools in the North.

This butterfly’s life cycle takes up to 45 days, so an early June arrival provides enough time for two generations of buckeyes to be born in our region. You’ll see these guys in the greatest numbers in September. 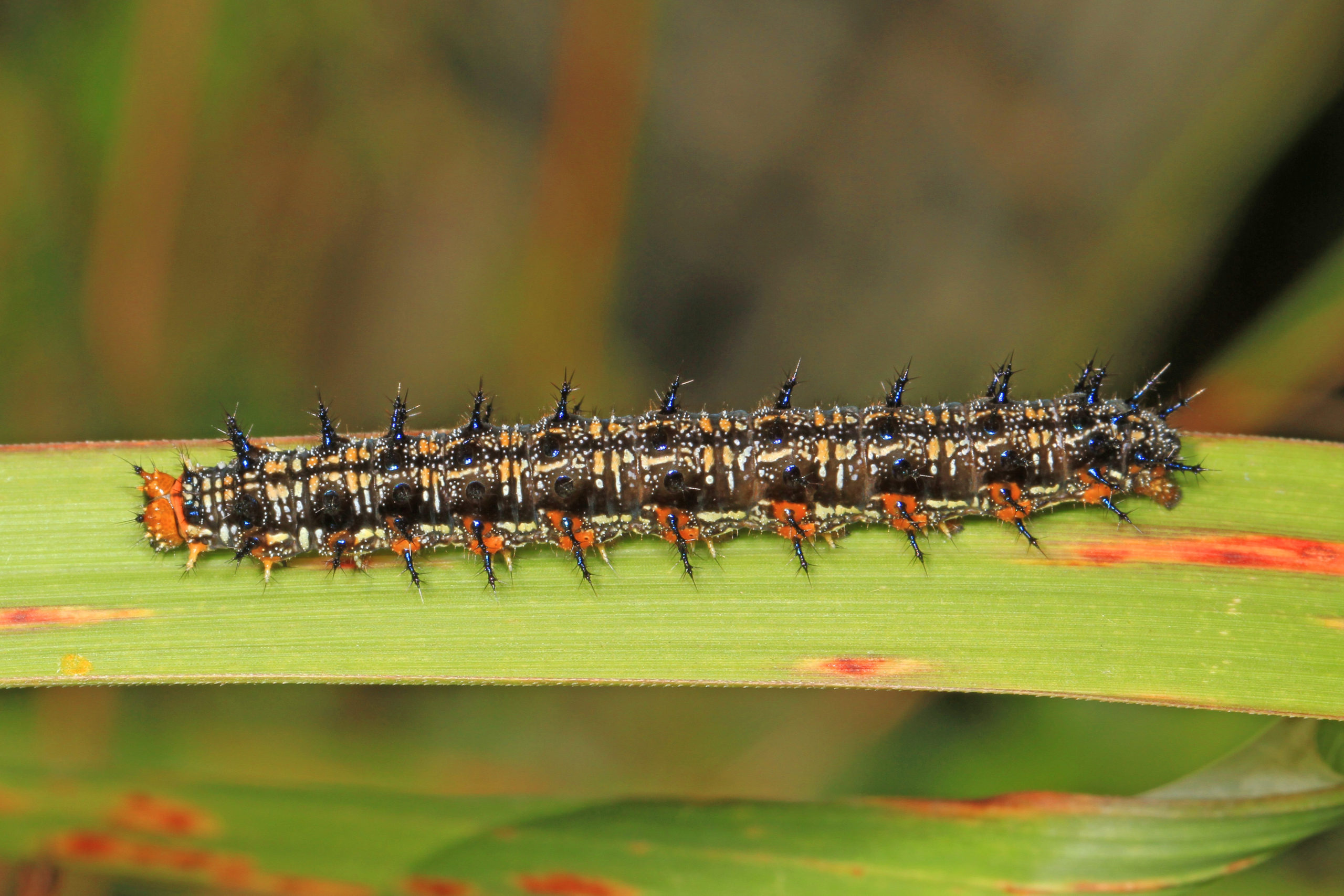 Common buckeye caterpillars are black and orange with branched spikes that are blue near the base. As you might imagine, the spikes help to deter predators. (Photo: Judy Gallagher via Wikimedia Commons)

The common buckeye caterpillar is black with orange spots and spiky bristles that are blue near the base. The caterpillar stage lasts two to four weeks. Then the caterpillar forms a brown chrysalis, which is difficult to spot hidden among twigs or leaves. This stage lasts one to two weeks. Finally, the adult butterfly emerges. A day after emerging, it begins to drink flower nectar.

The female butterfly then lays eggs one at a time on leaf buds or on the upper side of leaves. To find the best leaves, she drums her legs to pierce a leaf’s outer layer and “tastes” with her feet the chemicals that are present in the leaf. She prefers bitter-tasting leaves that produce greater concentrations of iridoid glycosides, a chemical compound that releases a hormone that activates the digestive system. 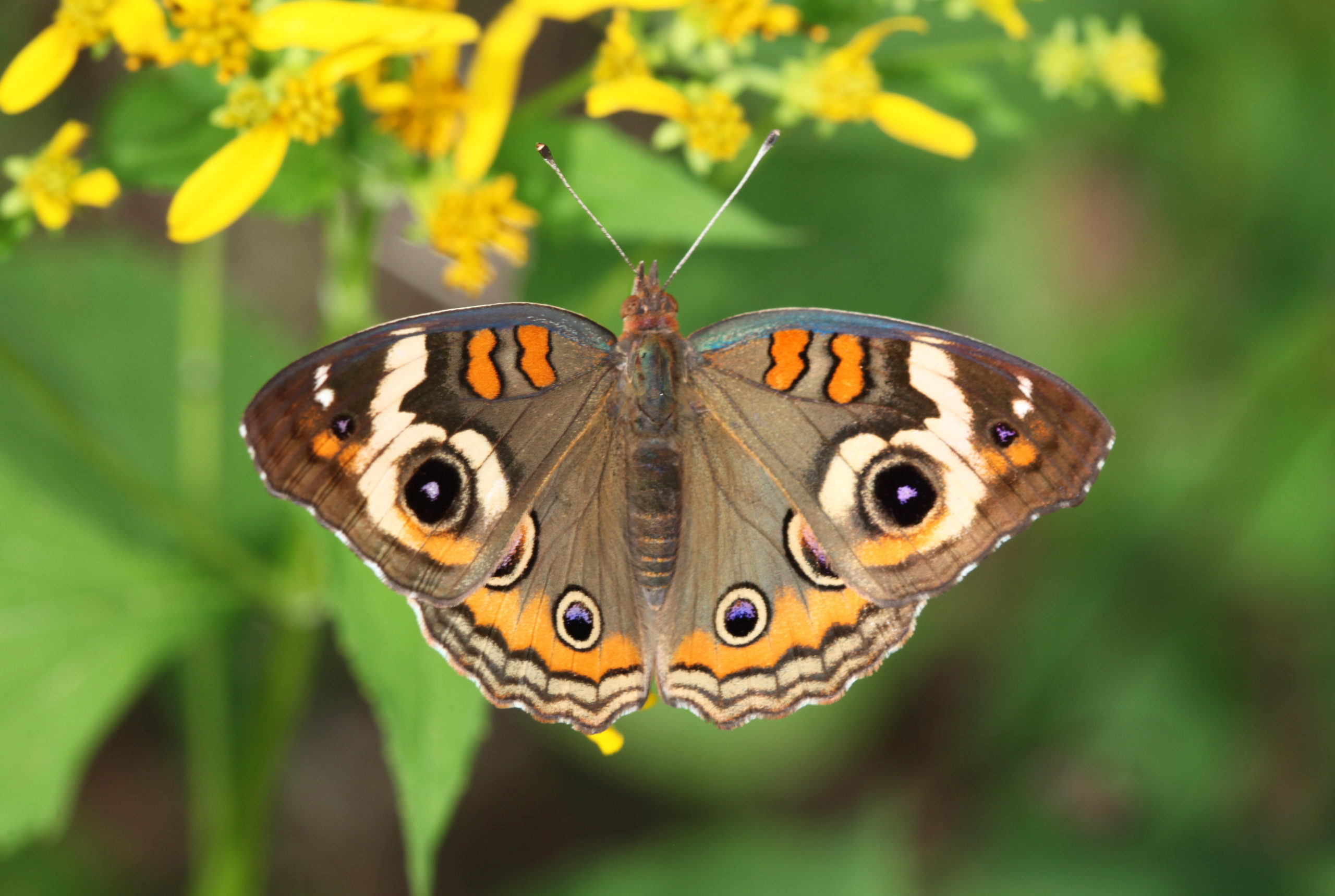 Butterflies have forewings and hindwings. The common buckeye has one large and one small eyespot on each wing. (Photo: John Flannery via Wikimedia Commons)

This butterfly changes color over time to help it camouflage itself better as colors change with the seasons – in the spring, plants are lighter in color, but by fall become darker brown; the undersides of the butterfly’s hind wings are tan in the summer and darker brown in the autumn to match.

Plants in the snapdragon, plantain and acanthus families are good host plants for this butterfly. Nectar plants for adults are tickseed, sunflower, aster, gumweed, knapweed and chicory. In the fall, the adult butterflies seem to especially like to drink nectar from late-season asters.

Common Buckeyes prefer sunny meadows, open fields and clearings with low vegetation. They like to bask on patches of bare soil. Buckeyes adapt to disturbed areas and will breed in weedy lots and edges of fields. When settlers cleared New England forests in the 1600s through the mid-1800s, they increased the habitat for the common buckeye. The numbers of common buckeyes are expected to continue to increase in New England along with global temperatures.