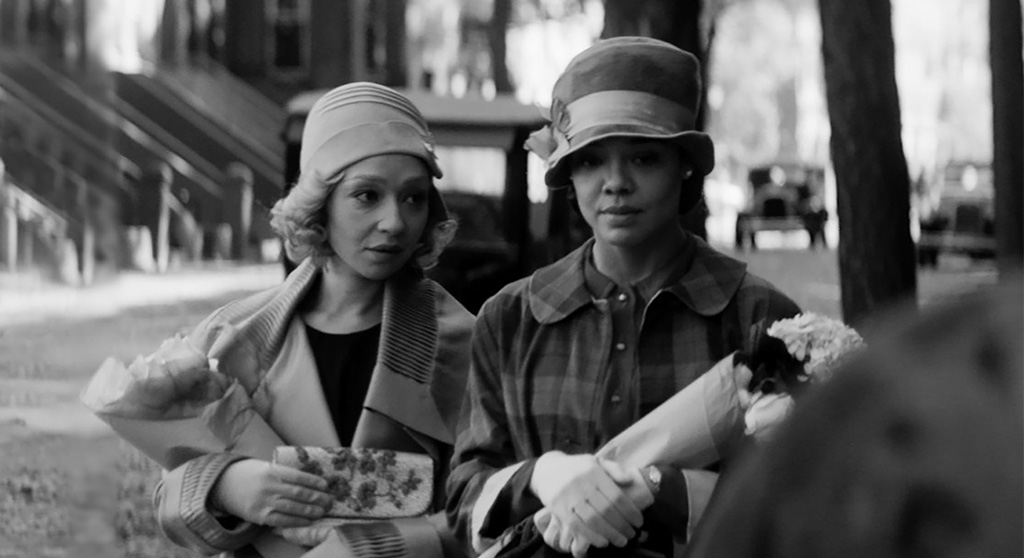 Golden Globe nominee and mixed-race Brit Rebecca Hall (“Vicky Cristina Barcelona”) makes her directorial debut adapting Nella Larsen’s 1929 novel set during the intersection of the Harlem Renaissance and Prohibition-era Manhattan. While Irene (Tessa Thompson), a black doctor’s wife and mother, is on a brief shopping excursion pretending to be a white woman, she encounters Clare (Ruth Negga), a former high school friend who is also black yet married to a self-professed racist white banker ignorant of his wife’s heritage (Alexander Skarsgård). Clare, determined to rekindle their friendship, visits Irene’s Harlem home uninvited and dismisses Irene’s attempts to dissuade Clare under the guise of concern for Clare’s safety. Irene is destabilized and cannot face the truth behind wishing Clare never questioned her choice to live as a white woman.

“Passing” will improve with repeat viewings and could become a classic. Viewers unfamiliar with the novel may find the movie inscrutable and the deliberate pacing challenging; its readers will have an advantage and note the significance of understated, quotidian moments such as opening a window, a man collapsed on the sidewalk on a hot summer day or the accidental breaking of household items. Larsen’s denouement embraces ambiguity, whereas Hall’s direction takes a firm stance on how to interpret Irene’s actions throughout the movie. Hall and Thompson create a complex portrait of a woman who is a mystery to herself, prefers to enforce rigid class, sexual, racial and gender norms yet flouts them when repercussions seem to be minimal. When Irene blames Clare for the disruption in her life, Clare is absent and off screen for much of the height of Irene’s emotional disturbance.

Hall chose to shoot with black-and-white film instead of color as a metaphor for how these women are photographic negatives of each other, and she defines passing beyond race. The film opens with people passing each other, the passing of time and seasons, passing as death and passing as a heterosexual person. Thompson’s fame as a sci-fi franchise staple and an out and proud bisexual made it harder to suspend disbelief that she was a traditional, heteronormative socialite shocked at her growing attraction to Clare. Hall juxtaposes Clare to the sun-blinding Irene as if clouds are parting to show heaven and reveals Irene’s lingering gaze on Clare’s legs. Repressed Irene engages with her husband sexually only after being near Clare, otherwise she repulses his advances for the sake of decorum. Near the end, Thompson evokes a Crawford-esque physicality as she becomes resolute on how to suppress her agitation. During conversations, Irene projects her concerns on to other characters, and Hall literally reflects it by showing how Irene sees Brian, her husband, standing closer to Clare in a mirror before seeing them farther apart without the distortion.

Negga steals the spotlight and is convincing as a dame who would not seem out of place if she had to share the screen with Barbara Stanwyck. Negga’s excellence is not surprising, considering that she has experience mesmerizing viewers in period films such as “Loving” (2016) or transcending reality in sci-fi television series such as “Marvel’s Agents of S.H.I.E.L.D.” Despite Clare living a lie, she is more relatable and intriguing than Irene because Negga projects flashes of conflicting emotions in seconds, whereas Thompson’s performance does not always clearly convey her internal life. Despite these exquisite performances and Hall’s direction, could Thompson or Negga convincingly pass? If Hall had cast herself as the protagonist and other actors who are more racially ambiguous than Thompson and Negga – they are also producers on the project – the film would be seamless, but less marketable.