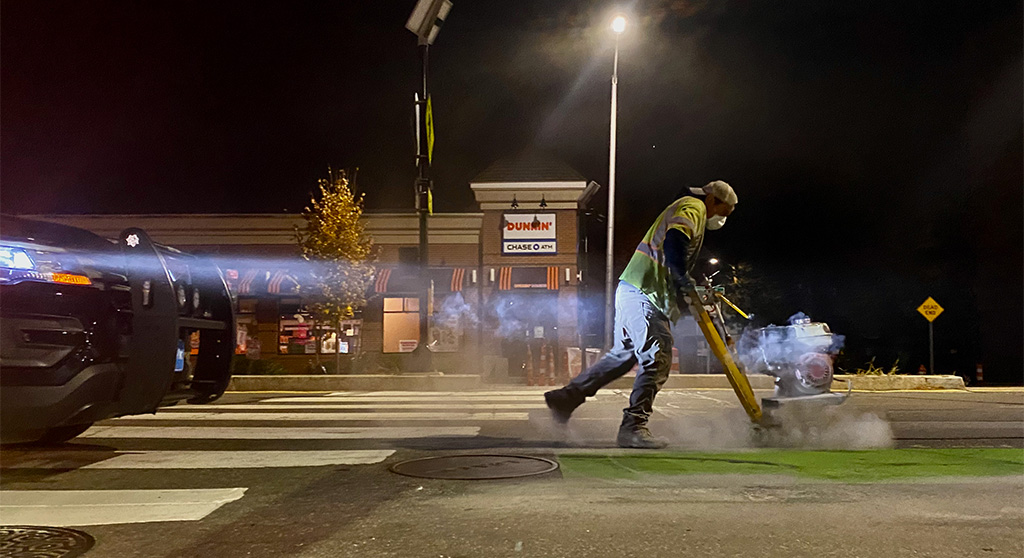 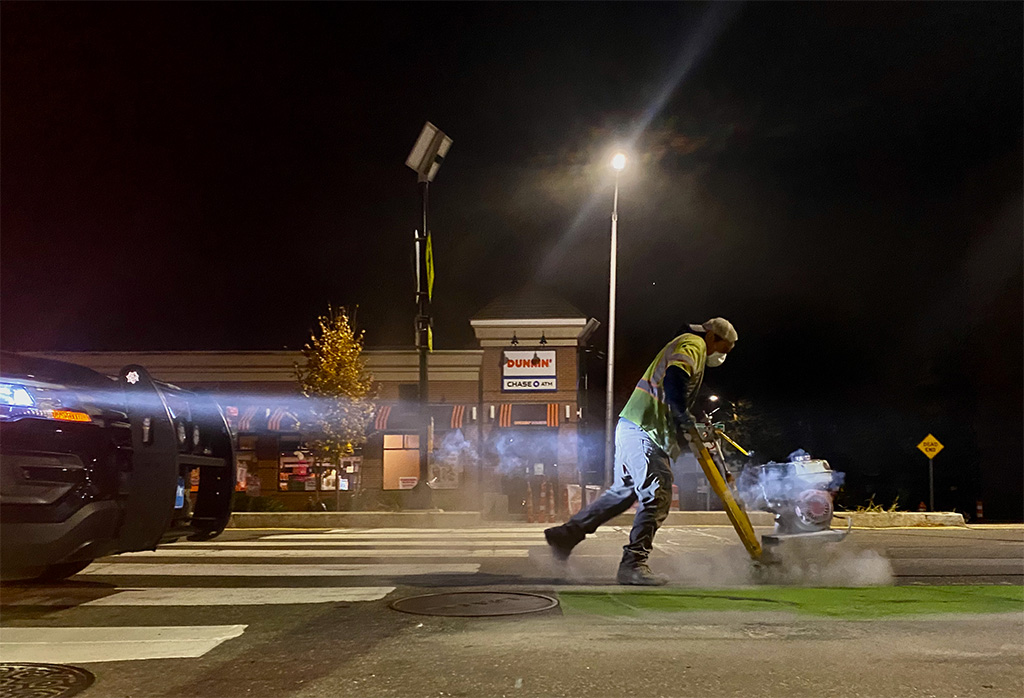 City councillors showed fatigue meanwhile from Cambridge’s ongoing battles over bike lane installations, in which residents are repeatedly surprised by projects mandated under city law and many either hope or fear they will be stopped or slowed.

Monday’s policy order asked for reports on fire and disability issues while saying specifically that these would “not impede the implementation” of the latest project, which is adding separated bike lanes and designated bus lanes in both directions on Massachusetts Avenue between Dudley Street and Alewife Brook Parkway. Yet public comments made it clear that some speakers read the order as causing a delay, though work by city contractors to install protected bike lanes on North Massachusetts Avenue was beginning, vice mayor Alanna Mallon said.

While Mallon and motion maker Patty Nolan agreed that the point of the order was that city staff would listen to residents and business owners about how bike lane installations affected them, the order that got councillors talking captured the problem in miniature: While Nolan believed she “couldn’t state it clearer” that the order wouldn’t impede installation of the lanes, Mallon said public reaction showed its vagueness. 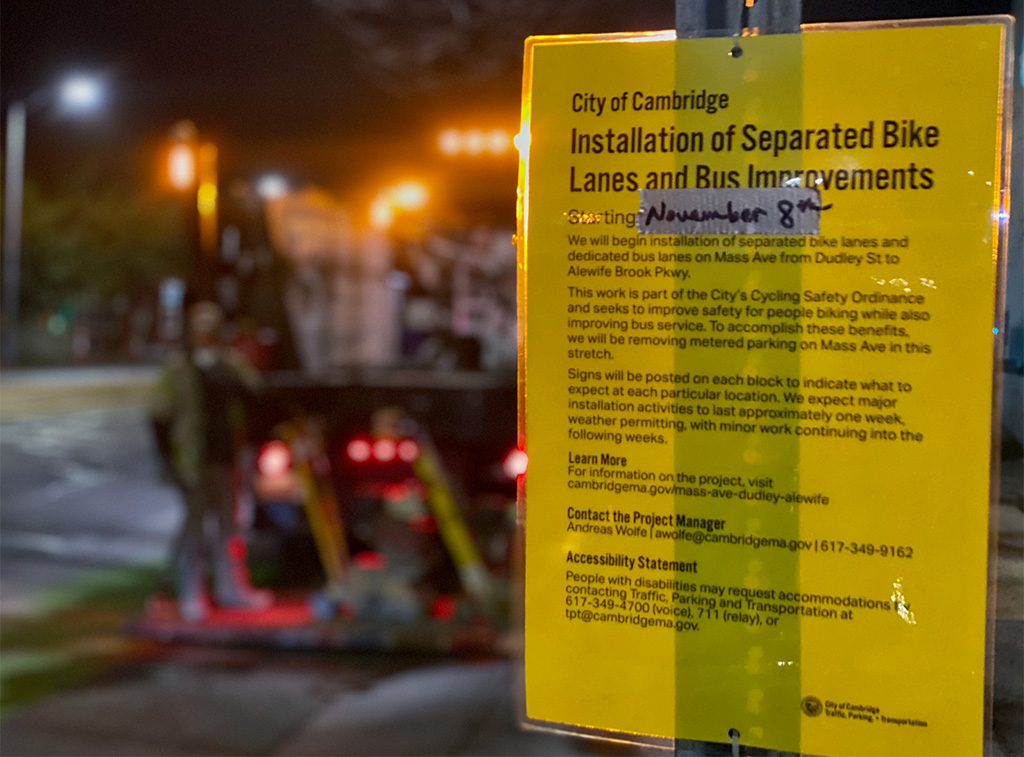 They agreed better communication was necessary.

“We have to do a better job. We already understood that when Brattle Street changes happened and there was a lot of surprise and consternation. When Cambridge Street happened, there was a lot of surprise and consternation,” Nolan said. “We need to make sure that when we implement these changes – because they are coming; we do have a timeline, we do have an ordinance – that when they come, we are doing effective outreach. And you may not be happy with it, but you should not be surprised by it.”

Nolan’s policy order walks the line between supporting protected bike lanes and calling for flexibility in how they’re implemented. It acknowledges that protected bike lanes are “crucial for cyclist safety and [for limiting] greenhouse gas emission” but calls on the city manager to work with the Traffic, Parking and Transportation Department to “deliver a report on how people with limited mobility can access services” under the new design. It also focuses on fire department concerns about allowing two-hour parking at times in the bus lanes. Current plans call for 15-minute loading zones in the southbound bus lane only, which the fire department and city planners say are safer to operate.

After listening to stakeholders’ worries, project planners are adding a few dedicated on-street parking spaces for people with disabilities and are exploring the possibility of two-hour spaces, the councillors said.

“There were no accessible parking spots on this stretch of Mass. Ave., and they are creating them. So when we think about how the cycling safety ordinance will actually benefit folks with disabilities – it will be providing parking,” Mallon said.

Changes were also made on Cambridge Street after bike lane installation based on resident feedback, Mallon said.

Andreas Wolfe, the city’s manager for the current North Massachusetts Avenue project, said in an emailed statement that “we are committed to monitoring how the project is functioning on an ongoing basis and will make changes as needed. We welcome the community’s continued feedback regarding this infrastructure project and will seek to incorporate feedback when possible.”

After weeks of public debate and public meetings, some speakers still had concerns that the net loss of on-street parking spaces will be detrimental to local businesses. “I work at Fast Phil’s [barbershop] in North Cambridge, and we have a very small business. We’re going to get killed with this. We’re going to be put out of business,” Cynthia Hughes said during public comment.

For project proponents, the matter continues to be urgent given the central role Massachusetts Avenue plays in connecting the city and the hazards bicyclist face from motorists – issues raised during the creation of a Cycling Safety Ordinance in 2019 and an amendment in 2020 that set the timeline for creating protected bike lanes.

“It is unconscionable to delay this implementation. It would be heartbreaking if a cyclist were to be hit on this stretch this winter because of a delay,” North Cambridge resident Janie Katz-Christy said, not realizing that work was underway.

In the end, final action on Nolan’s policy order was postponed when councillor E. Denise Simmons exercised her “charter right” to delay further discussion until next week. Simmons expressed support but asked for an opportunity to talk with Nolan about co-sponsoring the policy order. “I don’t think a week will make a huge difference,” Simmons said.