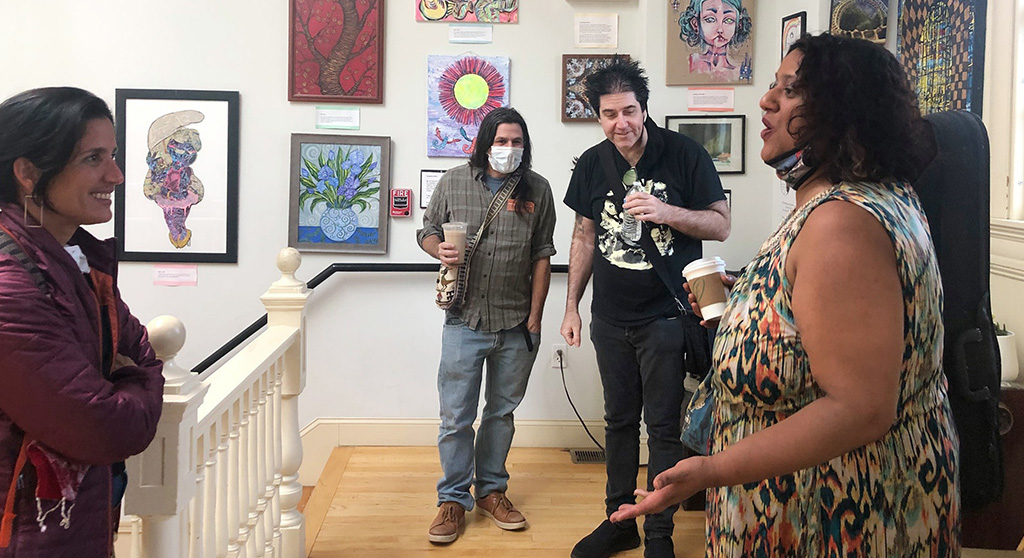 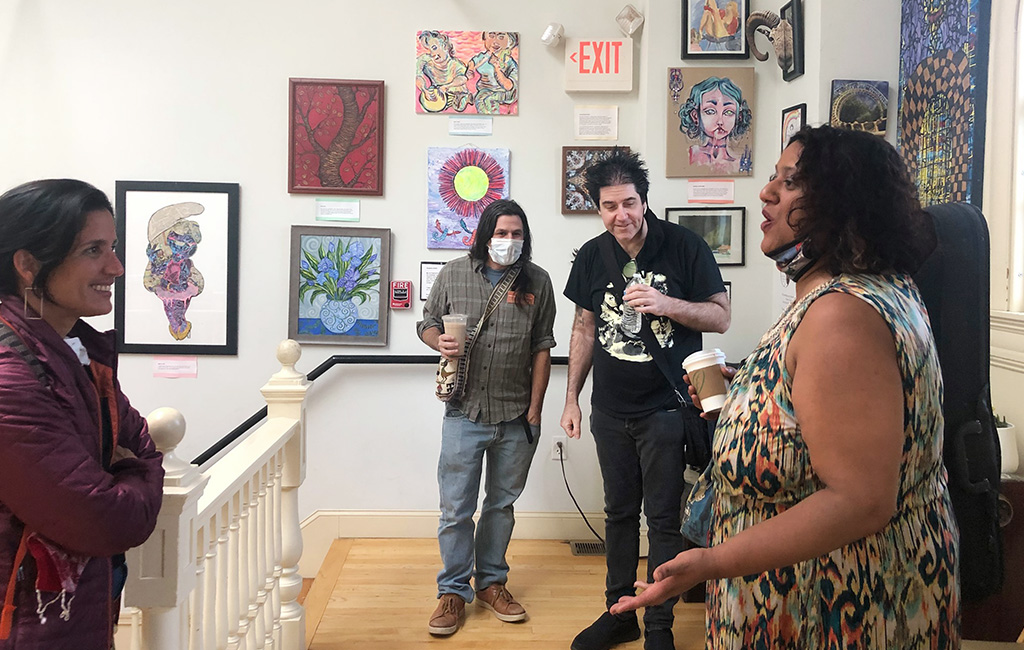 Parama Chattopadhyay, right, talks in October at her Out of the Blue Art Gallery with Somerville city councilor-elect Beatriz Gómez Mouakad. (Photo: Out of the Blue via Facebook)

The Out of the Blue Art Gallery is being pressured to leave Somerville’s Armory building by a city campaign of “intimidation and harassment,” including an incident in which police were called under false pretenses, co-owner Parama Chattopadhyay said.

The city has its own allegations to make against Chattopadhyay and the gallery, including that the zoning for the Armory doesn’t allow for “public gatherings” in its space, and that events the gallery or its outside renters hold there violate Out of the Blue’s lease – and are “unsupervised parties at which alcohol and marijuana have been in evidence.”

The gallery has been holding “raves” inside the Armory, according to a letter sent Thursday by Eileen McGettigan, the city’s special counsel.

Though the term paints a picture of crowded spaces filled with ecstasy-fueled, glow-stick-waving dancing to electronic music, in a Friday email city spokesperson Denise Taylor said the term “appears to be a summary term for multiple, high-music-volume dance parties and concerts.”

Officials contacted late last week and again Monday failed to present examples of either, or of examples of fellow tenants complaining of concerts, parties or raves.

Transition at the Armory

The city of Somerville took the building in May from Cambridge’s Sater family with a City Council-approved $5 million eminent domain filing meant to keep the building forever as a community arts space. Over the summer, Out of the Blue and 10 other businesses already leasing space in the Armory got what they were worried were Dec. 31 eviction notices, obliging a city official to explain that there was “no intention to ask any tenants in good standing to leave in the near future.” Newer leases offer stays through June.

Though a few of the tenants have complained about a lack of communication from the city and a failure to manage the building professionally during the transition, official reaction to the art gallery and its vocal leader seems to be a special case. “The problems at the Armory are not limited to mismanagement, but include the city’s efforts to intimidate and harass Parama for her justified criticism of how the city is handling its management of the Armory and its vision for the future,” Delaney said in a Tuesday letter. He said the tactics include trying to cut off access to a gallery mailbox and a “transparently retaliatory” permitting complication around a gallery event. Chattopadhyay ended up not serving cider and snacks at a free Oct. 23 reception for an exhibit called “Kids Envision Peace,” curated by 10-year-old Naomi Nurenberg. 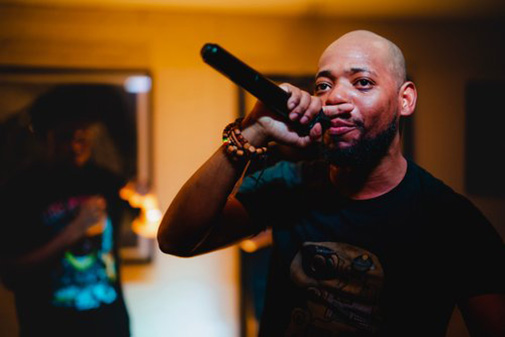 Frank Knight, a performer at a Nov. 19 event at Out of the Blue Art Gallery. (Photo: Underground Advocatez via Facebook)

The situation escalated Nov. 19 when the city official – Thomas Galligani, Somerville’s director of economic development and the person tasked with bringing the Armory under new management – called the police on Out of the Blue. He reported it was “illegally renting out the basement for a party which he believes is currently hosting underaged drinking,” according to a police report provided by the gallery, and “would like the party shut down and the tenant removed.”

The four officers responding to the 7:38 p.m. call found only a spoken-word reading by poets visiting from New York, Chattopadhyay said. The police report shows police left by 8:07 p.m., noting simply that there were “no signs of underage drinking.”

“Thank goodness the cops were ethical, fair and kind to my guests,” Chattopadhyay said, “and I wasn’t placed out on the street in winter.”

Outside rentals are a key part of the gallery’s business, and performances have been part of Out of the Blue’s work long before it landed at the Armory in February – an arrangement that includes a live-work unit for Chattopadhyay. Out of the Blue had been a fixture around Cambridge for 21 years, using the same model of holding events alongside visual art, before it was priced out in December 2017. The gallery would “absolutely” fail if it could not hold events, Chattopadhyay said Monday.

The zoning for the Armory includes an art gallery use, according to McGettigan’s letter, but conflict arises from a definition of art that extends beyond visual works hanging on a wall – which is why galleries and museums such as the Museum of Fine Arts in Boston or its Institute of Contemporary Arts host film screenings and performances by singers and poets. Yet the Armory special permit allows for “public gatherings” only in the building’s performance hall and cafe, the city says.

Chattopadhyay and the city were at odds from the time of the eminent domain seizure. When Delaney stepped in, he said, he asked for any written policies or procedures so she “could know what she could or couldn’t do” and was directed to 2012 zoning unknown to Chattopadhyay. “They’re retroactively saying she should have known about this zoning,” he said, though her business has followed the same model since before city ownership.

“The city takes over and something changes? Well, that’s fine. But you have to inform the tenants that’s something has changed,” Delaney said.

Delaney also feels the city is misrepresenting what the zoning says.

While all tenants have been offered a lease that would extend their tenancy until June 30, Chattopadhyay said it is predicated on signing a lease that Delaney called “unlawful,” filled with terms that are “clearly overbroad and only provide benefit to the city. In fact, the terms of this agreement barely resemble a lease at all, being more akin to an indemnification agreement in favor of the city,” in which Chattopadhyay is held responsible for building defects for which she has no knowledge and tenants who sign and later have legal issues with the city must pay for the city’s lawyers as well as their own, even if the court finds in their favor.

Mark Niedergang, the outgoing city councilor for Somerville’s Ward 5, said last month in a letter shared by Chattopadhyay that he believed the city would soon be hiring a firm to manage the building and deal with maintenance issues, and that a consultant would be hired to help manage a public process to determine the future of the building that would take “at least until the middle of 2022.” There are a handful of vacant spaces in the building, but the city has no plans to lease the spaces before the completion of the planning process sometime in late spring or early summer, Galligani said.

One empty space until recently belonged to the Červená Barva Press and Lost Bookshelf store run by poet Gloria Mindock. She closed Nov. 6 after nearly nine years at the Armory.

“There will be a new mayor … and the new administration I hope and expect will review this situation and decide whether to follow the course that [Somerville executive director of community development George] Proakis and Gallagani have laid out,” Niedergang wrote.

“There’s also a personal animus between Parama and a couple of people involved, and unfortunately that’s clouded their judgment,” Delaney said.