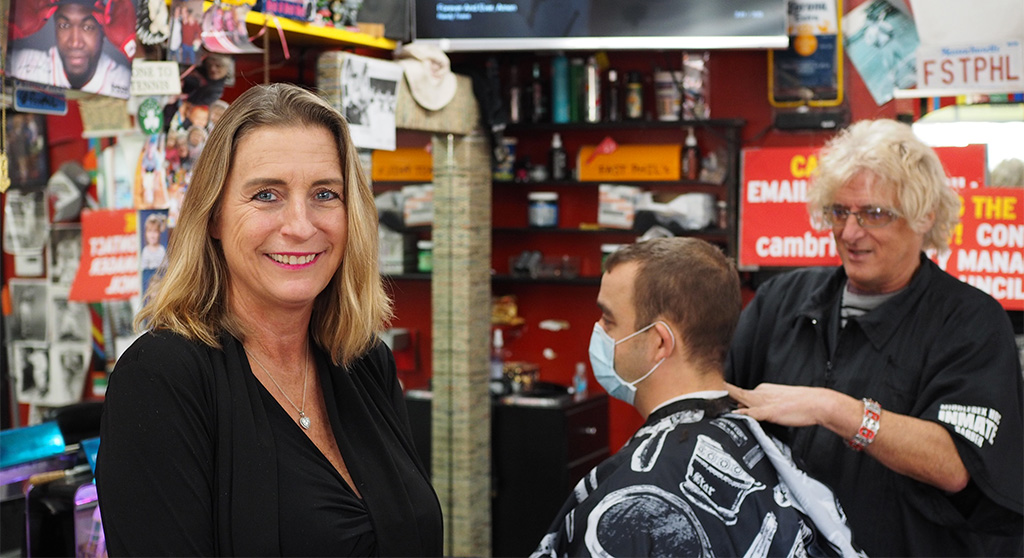 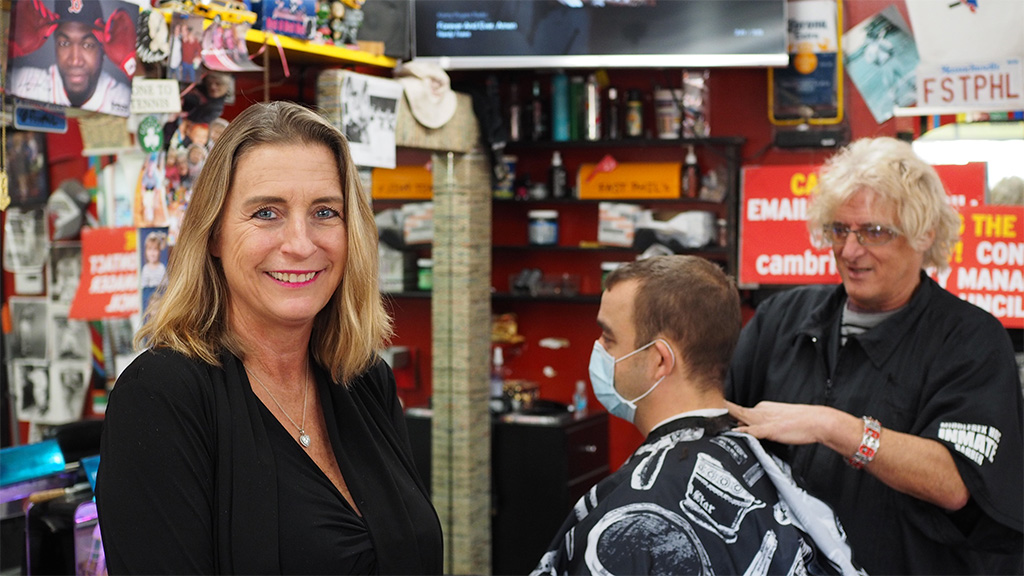 Cynthia Hughes and Philip Soccorso are co-owners of Fast Phil’s barbershop in North Cambridge. They removed their masks while this photo was taken. (Photo: Andy Zucker)

Cynthia (Cindy) Hughes and Philip Soccorso, friends for decades and experienced barbers, founded Fast Phil’s in North Cambridge in 2004. Business was excellent before the pandemic. They provided dozens of haircuts every day, and customers sometimes needed to take a ticket to wait their turn. Now, because of bike and bus lanes installed on Massachusetts Avenue in November, Hughes said she spends the day answering the telephone and trying to explain to people where to park, “which is nowhere.”

During the pandemic, these co-owners, like many others, were scared about the future of their business and accommodated customers as best they could. Hughes even brought her equipment to a local park occasionally to serve longtime customers. “We were so careful about the virus,” she said, “because we needed the business, and we didn’t want people to be afraid of us.” She spoke Dec. 15, just before the Covid omicron variant bloomed into ubiquity.

Once vaccinations became available, business picked up. “And then, boom, just like that” – Hughes snapped her fingers – “the city took it from us overnight with the parking.”

At least 70 spaces were removed. Forty of them were metered, said Andreas Wolfe, the city’s manager for the project. Seventeen total side-street spaces were repurposed, 15 of them with meters, while a pair of spaces on Gold Star Road became a loading zone.

“I just turned around”

A customer entering the shop asked about parking at a meter around the corner, one of the few nearby. Hughes advised him that even those two spaces were unavailable because it was street cleaning day, and suggested he park directly in front of Fast Phil’s driveway on Massachusetts Avenue.

“This is worse than the pandemic,” she said. “This will put us out of business for sure.” There are dedicated bike lanes and bus lanes on each side of Massachusetts Avenue between Dudley Street and Alewife Brook Parkway. Along that stretch there are a few spaces for people with physical disabilities and several loading zones on the southbound side of the street. Neither offer a parking solution for most customers at Fast Phil’s or other businesses.

Fast Phil’s surveyed its customers and found that 75 percent drive to the shop, some from as far away as Cape Cod and New Hampshire, Hughes said.

Having a single lane for traffic in each direction has also caused traffic problems. As one longtime customer left Fast Phil’s, he said he had tried to come the day before but when he was just two blocks away, “there was so much traffic I just turned around and went home.”

Hughes said she has communicated with city officials but found the experience frustrating. Years ago she asked that a bicycle rack be installed nearby so Fast Phil’s customers who ride could more easily come and go; her request was denied, she said. Nor was Fast Phil’s given warning of November’s parking changes, she said.

Wolfe suggested to Hughes that Fast Phil’s customers could park at Alewife Station. Parking there costs more than metered spaces, and it would take almost 20 minutes to walk to the shop. Another suggestion was that their customers park in Arlington and walk the rest of the way, Hughes said.

Hughes provided comment at a City Council meeting Dec. 6 about “the economic impact on our business that took us 18 years to build and to tell you that we need help now to mitigate our business losses.”

She endorsed a City Council order that the city manager “conduct a study to collect relevant economic data relating to the business impacts from the bike lane installations, which will help inform future installations of bike lanes in commercial corridors.” The study should have been done before the project started, she said in an interview at Fast Phil’s, but she hasn’t received a commitment from the city that one will be conducted. Asked about actions by the City Council, Hughes said, “They just listen.” Although a few are sympathetic, “no one has said they would do anything.”

The manager at City Paint, open 40 years, also said business has been hurt significantly by the lack of parking. Commercial vehicles used to arrive early to pick up paint for jobs that day. Now, the store is not crowded early in the morning, and commercial operators are afraid to come later, too, because Cambridge police may ticket them or chase them away, Thimi Luarasi said. City Paint’s own drivers and vehicles have also been affected.

Luarasi suggested Cambridge consider alternate traffic designs such as what he sees a few blocks away in Arlington: a combination lane approaching Alewife that is dedicated to buses only during the morning rush hour. Originally Cambridge planned only a single dedicated bus lane.

Before parking became such a problem, Fast Phil’s signed a new long-term lease. “Our landlord is awesome,” Hughes said, and Fast Phil’s doesn’t want to move. “I’m too old to start over, and we don’t want to pay triple the rent somewhere else.” She and Soccorso believe the current situation is untenable, though. “We’re going to get killed with this,” she said.

Andy Zucker is a North Cambridge resident who has expressed an opinion around bike lanes during public comment to the City Council. This post was updated Dec. 24, 2021, to correct that rather than asking directly that the city manager “conduct a study to collect relevant economic data relating to the business impacts from the bike lane installations, which will help inform future installations of bike lanes in commercial corridors,” the business owner endorsed a City Council order asking it.