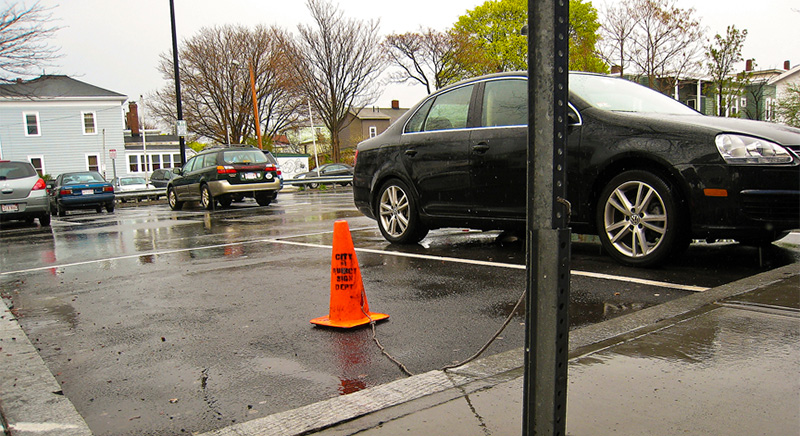 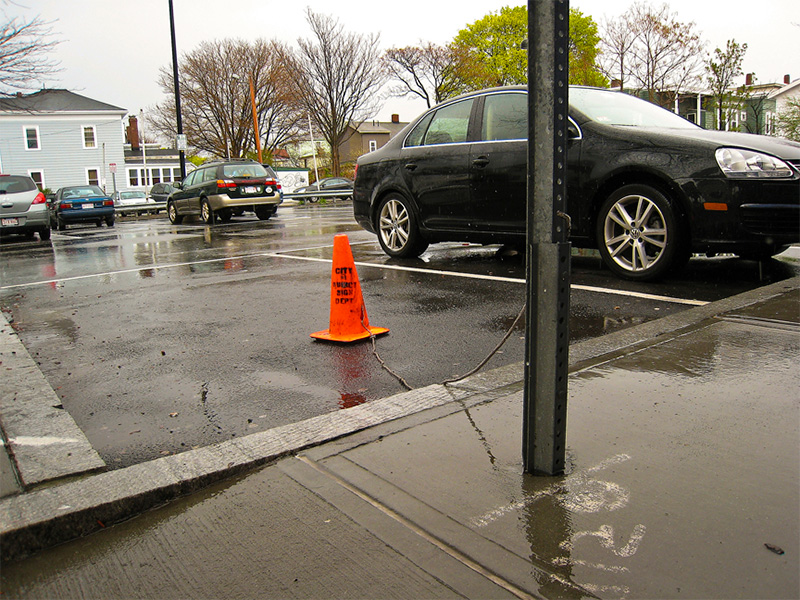 A space in a Cambridge parking lot is reserved for a Zipcar with a cone on a leash. (Photo: kbrookes via Flickr)

To some, removing parking minimums citywide could mean more housing or at least more space for gardening; to others it looks like a nightmare for seniors and their caregivers, and for parents who rely on cars to run errands for their family. Either way, the idea of changing zoning to eliminate minimums was put on hold Monday after a short discussion by city councillors.

The proposed change was presented by councillor Burhan Azeem, who said he’d spent the past month or so talking with residents and members of the business community before putting a pair of policy orders before the council – one removing references to minimums from zoning and another substituting language to the effect that “the city should not require, but still allow, homes to have off-street parking spaces.” The language also gauges interest among councillors about parking maximums, he said.

That was not enough for councillor E. Denise Simmons, who said she’d done her own talking with members of the community and remained concerned about “unintended consequences.”

“You really have done your due diligence … I look forward to how it turns out in the end,” Simmons told Azeem, but she wished the parking orders had gone to Azeem’s Transportation Committee first. Until she had the chance to talk with him further, “vet this out and hear from stakeholders and maybe make further modifications,” she said she would exercise her “charter right” to set the matter aside for one regular meeting.

Because the Feb. 14 meeting is scheduled to be a roundtable and Feb. 21 is the Presidents’ Day holiday, Azeem’s parking orders can next be heard Feb. 28.

Azeem’s orders came from a personal perspective, as a resident of a triple-decker where none of the households have a car – but do have parking that he estimated takes up about half the 2,000-foot lot. “I do not see this policy order as anti-parking or anti-driving. I simply see this as a way for the one-third of Cambridge households that don’t need parking to do something with a space that is being underutilized on their own land,” Azeem said.

At his own home, “by removing parking minimums we can turn that into a backyard, we can turn it into a garden, you can use it for other things,” Azeem said.

His parking orders drew the most public speakers Monday, with a dozen people in favor and five raising concerns. The majority liked the “flexibility” that would be created by taking parking minimums out of zoning.

“This idea of a blanket minimum just doesn’t make sense, especially given the housing crisis that we have and trying to meet our climate goals. Creating more parking induces more people to own cars, which makes them take more trips and makes traffic worse. Many low-income people will end up in units where they have a parking space but can’t afford a car,” meaning they’re paying for a space they cannot use, said one of the speakers, David Halperin.

In a way, Azeem’s orders are a correction to an opposite problem created by passage of the Affordable Housing Overlay in October 2020. The zoning makes it easier to build affordable housing in a few ways, including by having no requirement for parking, but has raised worries about inequity – especially since people qualifying for the housing are, at least anecdotally, more likely to need their cars for income by driving for a ride-share or delivery company, or working shifts on jobs that are far away and outside of mass transit hours.

“Before we roll out popcorn policies such as this, we need to survey people to find out how they will be affected,” said Nicola Williams, a former council candidate who feared the zoning would drive up the costs of having a driveway, making it “a privilege of the rich.”

“No parking at nursing homes, eldercare, for housing givers or for social service agencies? We don’t even have affordable grocery stores in Cambridge, especially neighborhoods with the lowest income in our city such as North Cambridge,” Williams said. “How are we going to expect a family of five to shop for their food and get to Market Basket all the way in Somerville on a bicycle?”

While views of people such as Williams have some support among Planning Board members, who began looking at ramifications of the Affordable Housing Overlay at a Dec. 22 meeting, there’s less sympathy among councillors. At a Dec. 15 committee hearing, councillors took a strong view on measures that could decrease reliance on cars citywide; Azeem’s predecessor on the council, Jivan Sobrinho-Wheeler, said the two-tiered approach that took parking away from affordable housing merely suggested that “we should be eliminating parking minimums for market-rate housing as well.”

Azeem said Monday that he was “very receptive to the concerns of many people that we heard in public comment today.”

“This is the start of a conversation,” he said, noting that there was no specific response time requested from city staff. “We’ll go through a long process before this policy will be adapted into zoning changes.”

This story was updated Feb. 8, 2022, to clarify that the reasons given for lower-income residents needing cars are technically anecdotal.