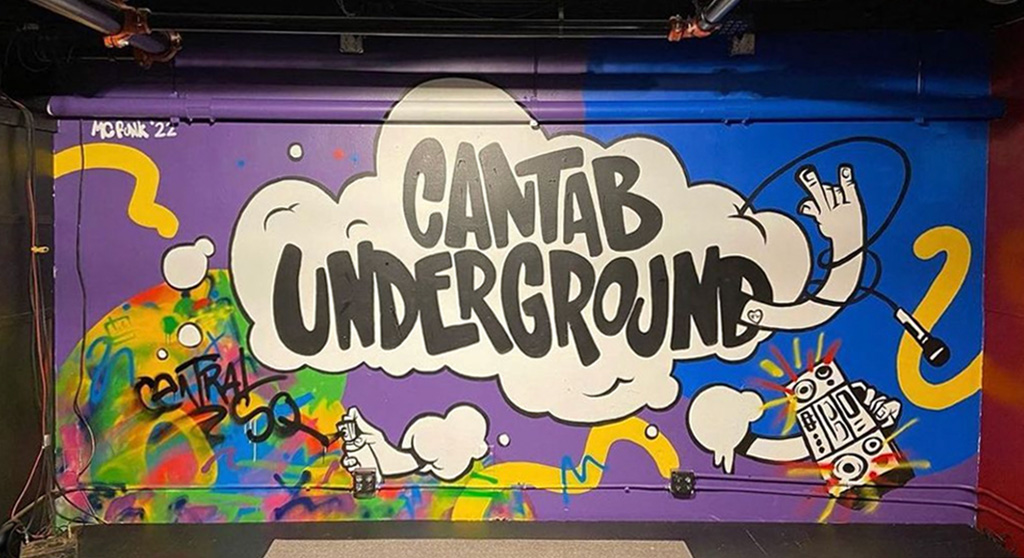 A mural by Eric MC Funk will be the backdrop for a new poetry series at the Cantab Lounge in Central Square. (Image: Cantab Lounge via Instagram)

The Boston Poetry Slam shows no sign of returning to the Cantab from its pandemic hiatus, but its Wednesday night slot will be used again for a live poetry series starting this week.

Poetry Night at the Cantab is taking place with the blessing of longtime slam curator Simone Beaubien and her expected replacement, Cassandra de Alba, according to Dawn Gabriel, organizer of the new night.

“We’re all in touch and supportive of each other,” Gabriel said. “This isn’t a Boston Poetry Slam event, but it’s poems on Wednesday, something a lot of people are excited to see return.”

Another change: The basement poetry space, once known as Club Bohemia, is now the Cantab Underground, with a colorful mural by Eric MC Funk forming a new backdrop.

The slam has been held at The Cantab Lounge since Oct. 16, 1992, but shut down for the pandemic in March 2020 with other indoor entertainment. In October, as the Cantab was brought back to life and neared reopening, Beaubien told bookers she wouldn’t return but would look for someone who wanted to run the show; de Alba was made new curator for the slam and hoped Jan. 19 would be the first new show – but by that time the omicron variant was raging. The Cantab hoped to get the slam back by the end of March, but “she wasn’t able do that,” the club’s Andrea Ballotta said. Messages were left with de Alba over the past weeks and Sunday, but without reply.

There is still also no sign of a returning Sunday night Lizard Lounge Poetry Jam, which Jeff Robinson ran from 1997 until the pandemic at The Lizard Lounge, the downstairs club at the Cambridge Common restaurant between Harvard and Porter squares. In this case, it’s because the Lizard Lounge has yet to reopen – a victim of the so-called Great Resignation, owner Charles Christopher said.

“We’re having the same issue that many of our friends in the restaurant business are having, which is finding workers,” Christopher said March 11. He was able to reopen Toad, the fun-sized  Porter Square nightclub next to his still-closed Christopher’s restaurant, and found patrons were delighted. But even Toad is short-staffed, and open only three nights a week.

Doors for the new Cantab poetry series are at 7 p.m., and the open mic starts at 8 p.m., Gabriel said. Though the slam was consistently a crowded, standing-room-only event, she said the number of attendees now will be capped at 75 percent of the basement’s maximum capacity and include only attendees presenting proof of vaccination.

Open mic hosts include veterans Myles Taylor, Zeke Russell and Sam Cha in addition to Gabriel. The Cantab will have drink specials for poets, including mocktails, Gabriel said.

“Inflation may have hit everything else, but the cover is still only $3, just as it was in ’95,” Gabriel said in an email.