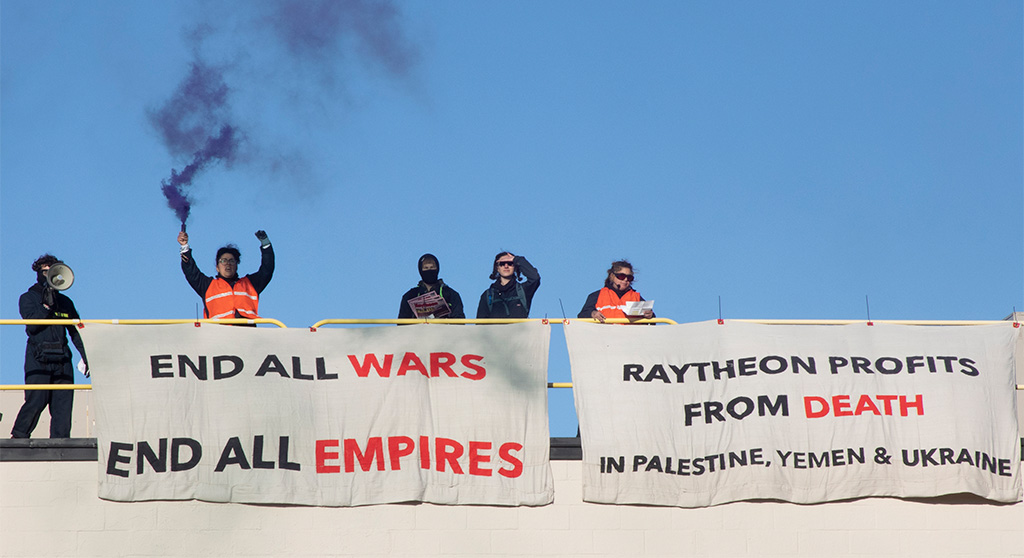 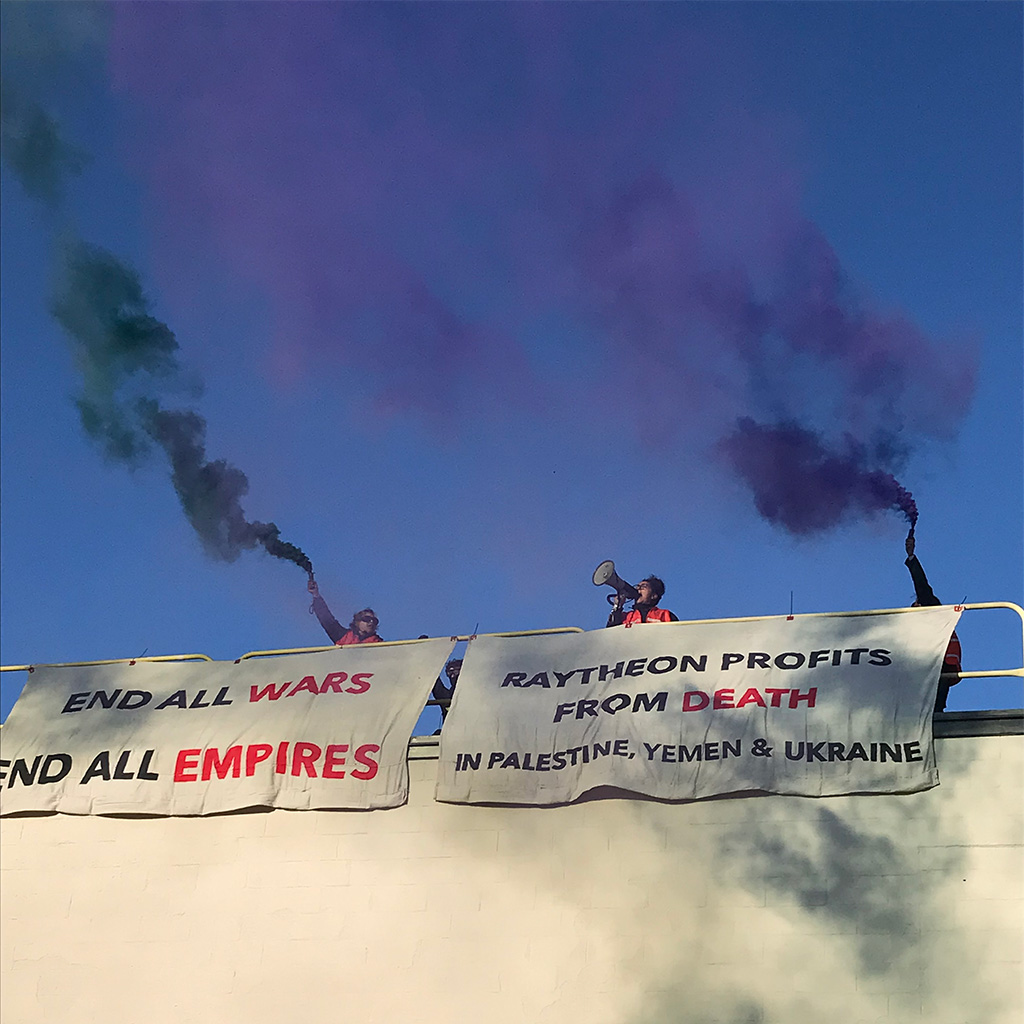 Five protesters were arrested Monday after scaling a Raytheon BBN Technologies facility in the Cambridge Highlands, saying they hoped to call attention to the company’s weapons sales and “record of human rights violations.”

Raytheon, which is based in Waltham, is one of the top weapons contractors in the world, and the activists from Resist and Abolish the Military Industrial Complex said they were upset by comments made by chief executive Gregory Hayes in January that suggested his company would benefit from a Russian invasion of Ukraine and rising military tensions around the world.

“With every war and every conflict, Raytheon’s profits multiply. Raytheon profits multiply as bombs fall on schools, wedding tents, hospitals, homes and communities. Living, breathing, human beings are being killed. Lives are being destroyed, all for profit,” RAM INC members said in a press release.

Around 15 members of the group arrived at the 10 Moulton St. building in the morning, blockading the company’s parking garage, disrupting business inside and scaling the roof, said Raven, a spokesperson. Those who scaled the roof used smoke flares to draw attention to their protest, while chanting and dropping flyers to workers as they arrived at the facility. Banners they unfurled read “End All Wars, End All Empires” and “Raytheon profits from death in Yemen, Palestine & Ukraine,” according to Raven and photos supplied by the group. 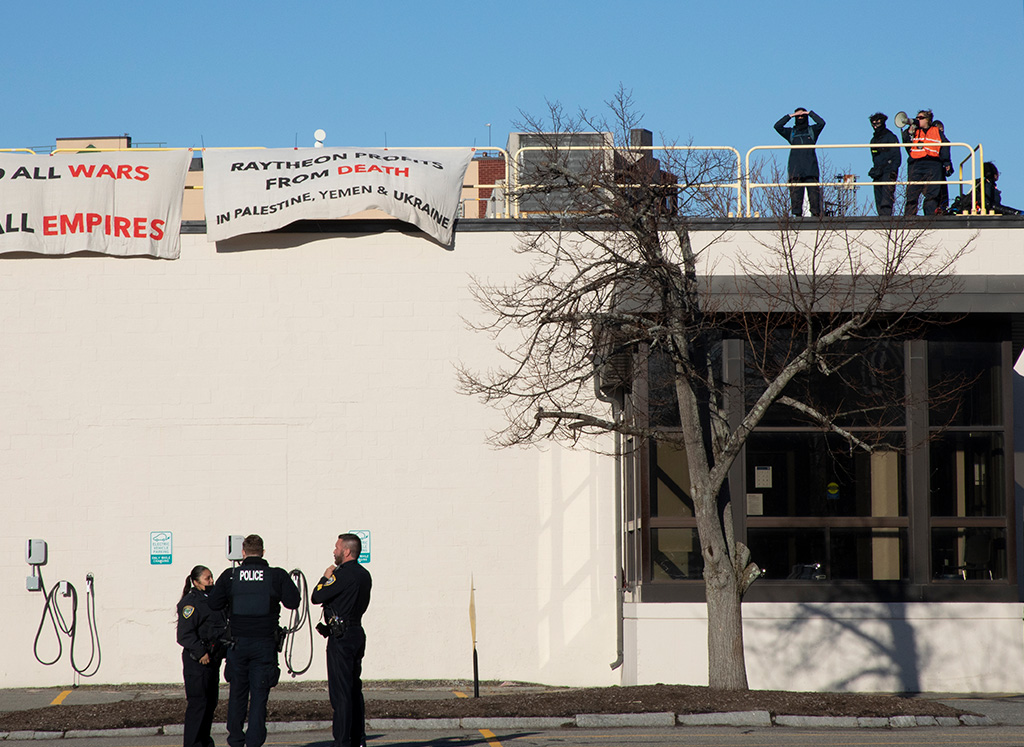 Police received a report about the protest at approximately 8:15 a.m. and came to try to work with the organizers to peacefully resolve the protest, said Jeremy Warnick, director of communications and media relations for Cambridge police.

Members of the group were arrested after five hours on the roof, where they were locked to each other using reinforced PVC pipe and U-locks, Raven said. Police extracted them from the devices before arresting them.

“Officers attempted to communicate with and escort protestors – who were locked together and had used smoke devices – off the roof of the building. However, they refused to cooperate and were later arrested,” police tweeted at 3 p.m.

The defendants, all between 25 and 30 years old and four with addresses in Providence, Rhode Island, face charges related to breaking and entering, vandalizing property and trespassing. They were expected to be arraigned in Cambridge District Court. The remaining protestors, which had grown to as many as 30 people, left the area shortly after the arrests were made, police said.

The group has taken part in similar actions – in August the group shut down access to a Raytheon facility in Portsmouth, Rhode Island – but this one was planned to take place on the business day closest to the 19th anniversary of the U.S. invasion of Iraq on March 20, 2003. “We took action today to condemn all wars and all colonial occupations. The new antiwar movement that has grown in response to Russia’s invasion of Ukraine must grow to call for an end to Israel’s occupation of Palestine, an end to Saudi Arabia’s war on Yemen and an end of the U.S. military industrial complex,” Resist and Abolish the Military Industrial Complex said in a press release.