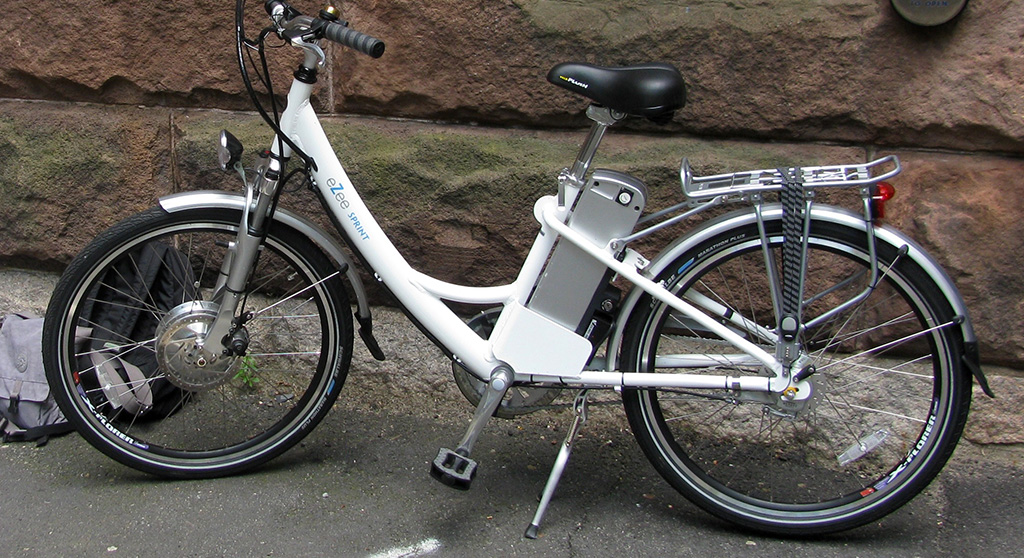 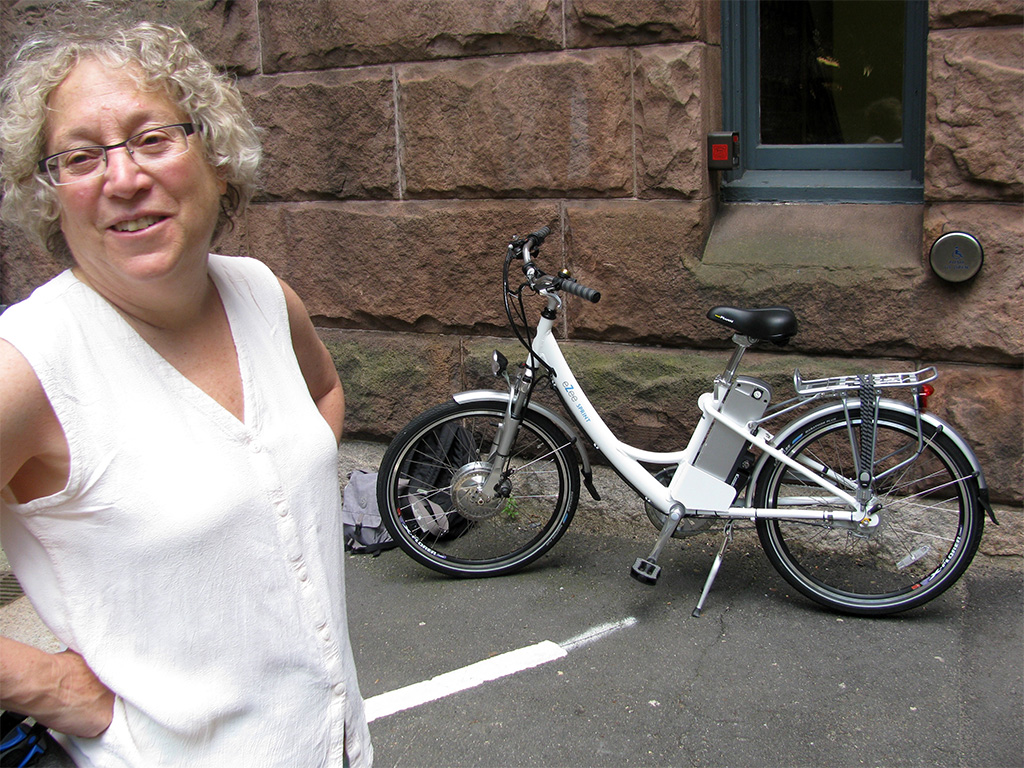 Henrietta Davis, a former city councillor and mayor, showed off an e-bike at City Hall in 2010 – seeking adoption of a way to help ease the climate crisis more than a decade ago. (Photo: Marc Levy)

The latest report on the looming catastrophic threats posed by climate change must redouble our determination to reduce all sources of carbon emissions. Our response must be multi-pronged and comprehensive, and it will require changes to both systems and individual behavior. Reducing building emissions has consumed a lot of our attention lately and for very good reason, but we must decarbonize all sectors of our economy. Decisions about how to move from place to place – by transit, car, bike, foot or other means – are among the most frequent sustainability choices individuals make daily, and each of these small decisions can have a big impact cumulatively.

The transportation sector accounts for about 30 percent of the state’s carbon footprint, and increasing transit ridership is an essential part of meeting our overall emission reduction goals. To succeed, the state must increase investment in public transit significantly to make existing bus and train service more reliable and more frequent and to add routes to serve more communities. There is some encouraging news on that front: The MBTA recently announced its goal to fully electrify its bus fleet by 2040, and Mayor Michelle Wu just vowed to replace Boston’s entire fleet of school buses with electric vehicles by 2030. Transit advocates cheered at last month’s long-awaited opening of the green line extension to Somerville, and soon Medford, which is already spurring transit-oriented development that will take hundreds of thousands of cars off highways and local roads annually.

But even a greatly improved public transit system cannot meet every personal mobility need or bring the transportation sector to net zero. Cars, SUVs and light trucks alone account for one-fifth of the state’s greenhouse gas emissions and will remain both a mode of choice and necessity for many residents. Our dependence on cars is deeply entrenched, but we must break the dependence on the internal combustion engine. According to a recent essay in The Boston Globe, Massachusetts must convert a far higher percentage of gas-fueled vehicles to electric by 2030 – we need as many as 750,000 electric vehicles to meet our climate goals. That aggressive goal is about 15 times higher than the current number of fully electric or plug-in hybrids, but it still only accounts for about 17 percent of the 4.5 million cars registered in the state.

The path to converting such a significant portion of the personal transportation sector from gas to electric within less than eight years could prove too steep a climb unless more people are willing to think outside the box – and by that, I mean the metal boxes of cars – that are the default personal transportation mode of choice for too many people, too much of the time. Even with greater financial incentives and unflagging promotion, electric vehicles are still simply out of financial reach for too many people, with an average sticker price of more than $56,000. More EV adoption will not remedy the state’s crippling traffic congestion. Nor will newer EVs loaded with high-tech safety features designed to protect drivers and passengers reduce the growing number of deaths and injuries to pedestrians and cyclists or eliminate property damage from drivers crashing into buildings and trees.

Fortunately, we have another “e-” option with great untapped potential to reduce emissions, congestion and traffic deaths all at the same time: e-bikes. A bike can replace a car for many daily trips, since vehicle miles traveled among households in metro Boston average 25 miles or less; e-bikes have battery ranges that easily meet or exceed that, and their battery assistance can make biking a more viable option for people with mobility challenges. Imagine if some households with two cars replaced one of them with an e-bike, or if instead of owning a car, more families chose to rely on an e-bike (or two!) and supplemented it, as needed, with trips on public transit, by ride share or in a rental car. Immediately they would save thousands of dollars annually on gas, insurance, maintenance and parking.

Ferrying small kids to day care or lugging home a family’s worth of groceries? Consider one of the many available “longtail” or cargo electric models. On an e-bike you won’t waste time or fuel circling the block hunting for a parking space. Even in New England, inclement weather that would make biking unsafe or infeasible is less frequent than many imagine before they’ve tried year-round cycling; good rain gear, warm clothing and, of course, lights can make riding quite doable day and night during most of the year.

E-bikes are in regulatory limbo here, but that soon that may change. The state’s Joint Transportation Committee recently advanced an e-bike bill that will bring Massachusetts into sync with federal e-bike standards adopted in 36 other states by defining three classes of e-bikes and regulating where they may be operated based on how fast they can travel (up to 20 mph for Class 1 and 2 e-bikes; up to 28 mph for Class 3). Class 1 and Class 3 bikes are “pedal assist,” meaning the rider must pedal to get a battery boost and the assistance cuts off at the top speed. Subject to local control, all classes of e-bikes would be allowed on all roads and paths that permit pedal bikes and would not require licensing, registration or insurance. The more powerful Class 3 e-bikes would have additional restrictions and could not be operated by a rider under 16. E-bikes would be prohibited on all sidewalks. State Sen. Will Brownsberger has summarized the pending e-bike legislation in two posts on his blog.

Passing state legislation will enable bike share services such as Bluebikes to add e-bikes to their fleets. Shared e-bikes get ridden more often per day than shared pedal bikes, and adding e-bikes significantly increases system usage among commuters and casual riders. Bike share can offer people an easy and inexpensive way to try out an e-bike before committing to buying one. Time and again, people remark on how much fun it is to ride a bike – to move freely outside of a metal box, to experience their surroundings on a more human scale, to be able to stop spontaneously to greet a friend or make an impulse purchase at a business. E-bikes can make those small thrills possible for a greater range of people and trips.

Relative to cars, e-bikes offer many benefits and significant savings, especially with gas prices soaring. Yes, they are more expensive to acquire than a pedal bike, but the cost is far lower than owning a car and financing is becoming more readily available; state incentives to buy e-bikes should be offered too, just as they have been for EVs. E-bikes can be locked securely and alarmed, and some brands are equipped with GPS anti-theft tracking. Storage pods can provide secure on-street parking for all types of bikes for those without a place to store them at home. And to those who fear that e-bikes increase risks to pedestrians, the risk of death or severe injury is far less than being hit by a car. Certainly, anyone who operates any moving vehicle or motorized device must do so responsibly, but years of traffic data should leave no doubt that every car trip we avoid reduces the risk of death and injury to ourselves and others. And staring down the barrel of the climate catastrophe, the opportunity to embrace every available alternative to gas-powered cars is too great to ignore.