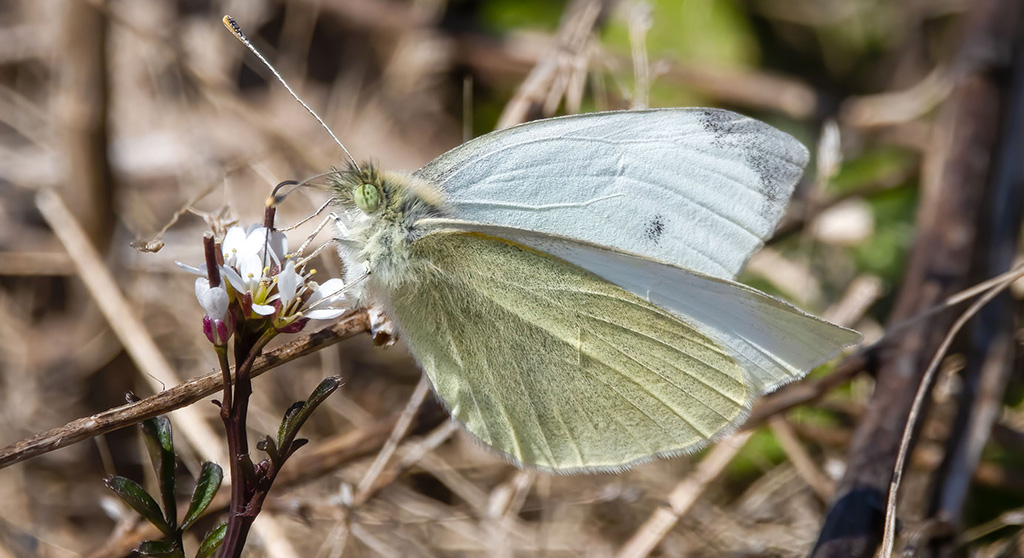 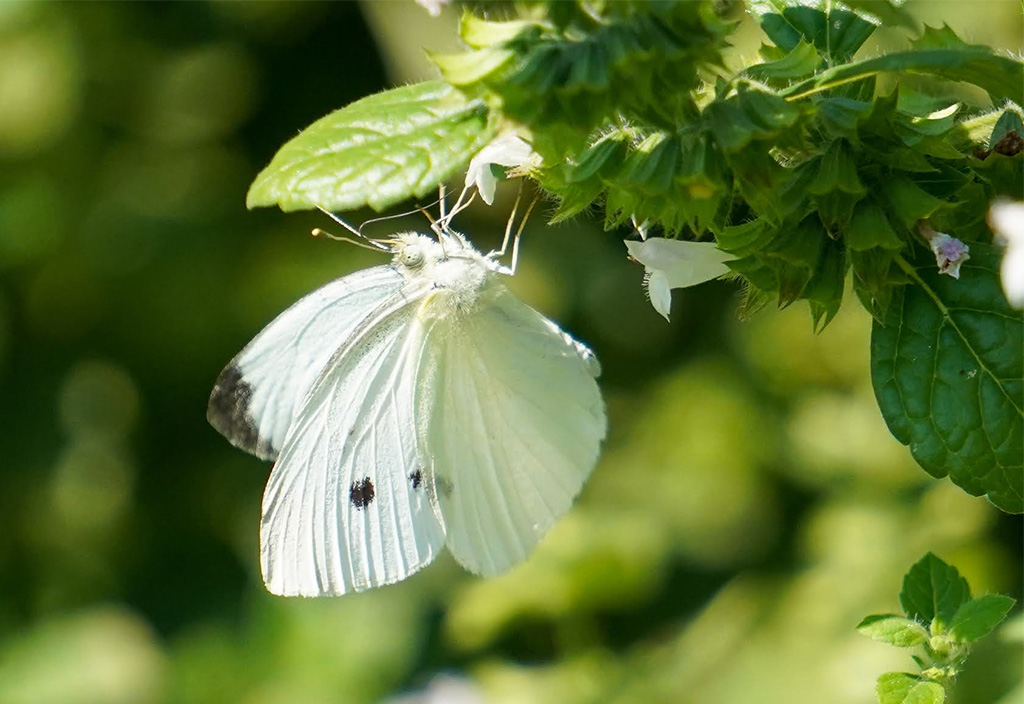 The first butterfly you probably see each year – and the one you see the most frequently in the summer and fall – is the abundant and widespread cabbage white butterfly (Pieris rapae). It is North America’s only introduced butterfly. Cabbage whites are native to parts of Europe, Asia and North Africa but were introduced unintentionally to Quebec, Canada, from Europe (probably England) in about 1860. The species spread rapidly to all of North America, except deserts and semidesert regions. This butterfly even reached Hawaii (imported from California) by 1898 and Australia by 1943. For some reason, this butterfly has not spread to South America.

Cabbage white caterpillars eat plants in the cabbage and mustard families (such as cabbage, kale, bok choy, turnips, radishes, horseradish and broccoli), so they are widespread in farmlands and suburban gardens. Cabbage white females lay eggs on the undersides of leaves of cabbages and mustards in summer. After about five days, the eggs hatch and the caterpillars feed and develop for 10 to 14 days. Then each caterpillar metamorphoses into a chrysalis. This stage lasts for seven to 12 days. Altogether, the eggs take about five weeks to transform form egg to adult, though the last summer generation overwinters as a cocoon/chrysalis and emerges as an adult in the early spring. 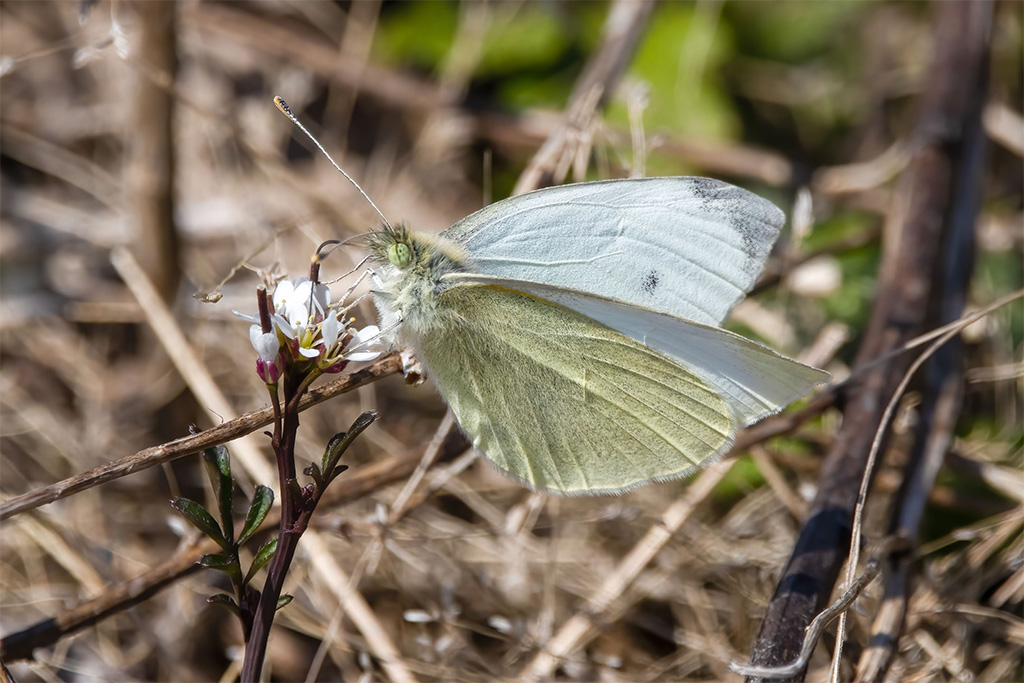 Cabbage whites have a darkened underside of the hind wing, which enables them to heat up quickly in the sun. (Photo: Richard George)

During World War I’s food shortages, President Woodrow Wilson encouraged Americans to plant vegetable gardens. This patriotic and civic duty continued during World War II, and Americans planted more than 20 million victory gardens to help with the war effort – in 1943, first lady Eleanor Roosevelt planted one on the White House lawn. Beginner gardeners were encouraged to plant crops that didn’t take up much space, such as cabbage, and some of the most popular plants were cabbages, kale, broccoli, turnips, and Brussels sprouts – all plants the cabbage white butterfly prefers. By May 1943, victory gardens supplied 40 percent of the produce in America, but cabbage whites ate so much of these crops in the United States and Great Britain that a British newspaper called them “Hitler’s ally.” 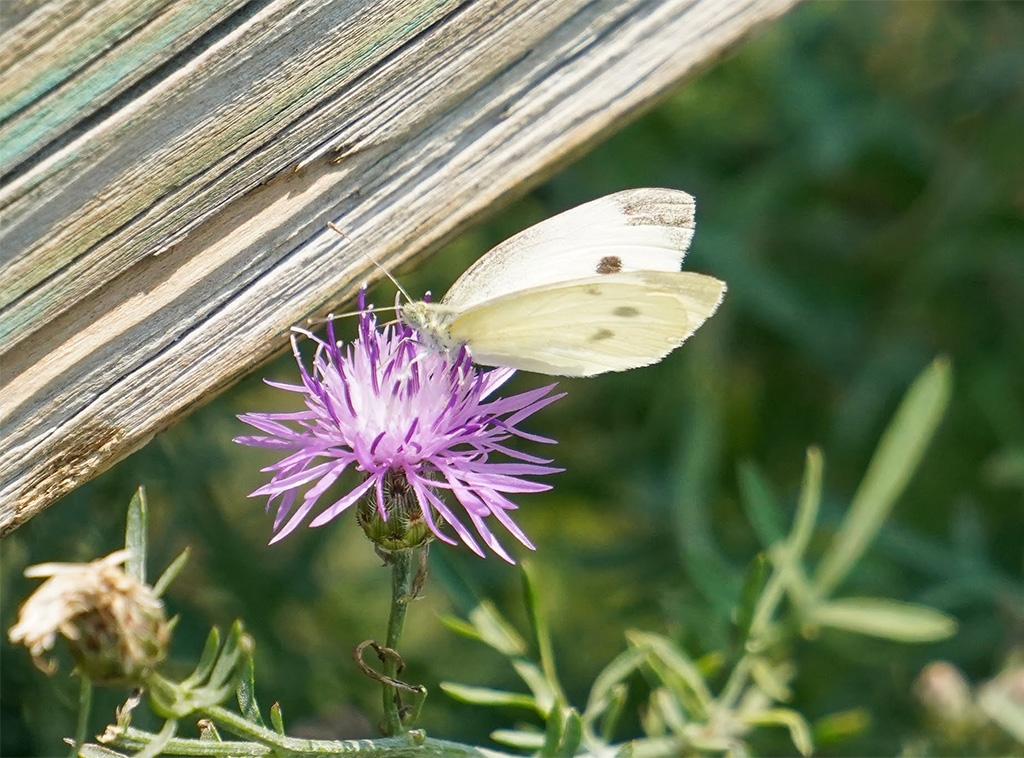 This small- to medium-sized butterfly has white wings with small black dots. Males have one spot per wing; females have two. The wings reflect ultraviolet light, which we cannot see but butterflies can; to other cabbage whites, the females are lavender and the males are dark purple. Scientists have shown that females are more attracted to deeply colored males because the strength of the color reflects the amount of protein the males ate when they were caterpillars. (Adult cabbage whites go on to prefer blue, purple and yellow flowers. They use ultraviolet light as a guide to find the center part of each flower, where the nectar is located. The flower’s petals reflect ultraviolet light, but the center of the flower absorbs ultraviolet light.) The deeper purple a male is, the healthier he is likely to be. 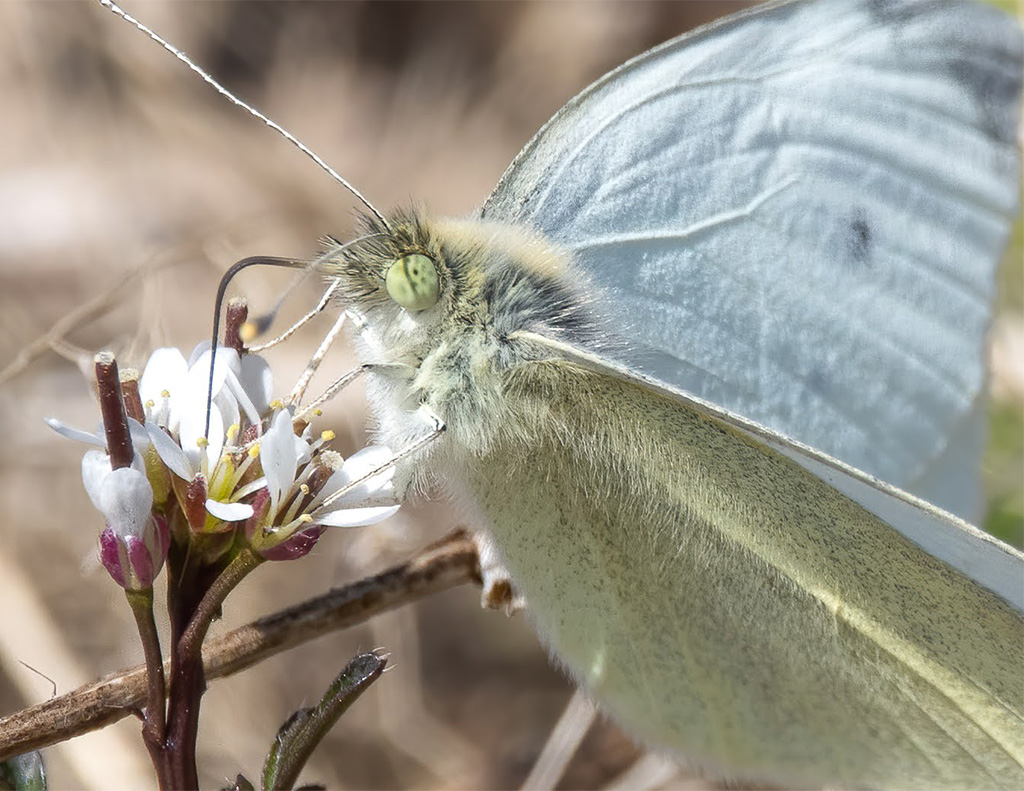 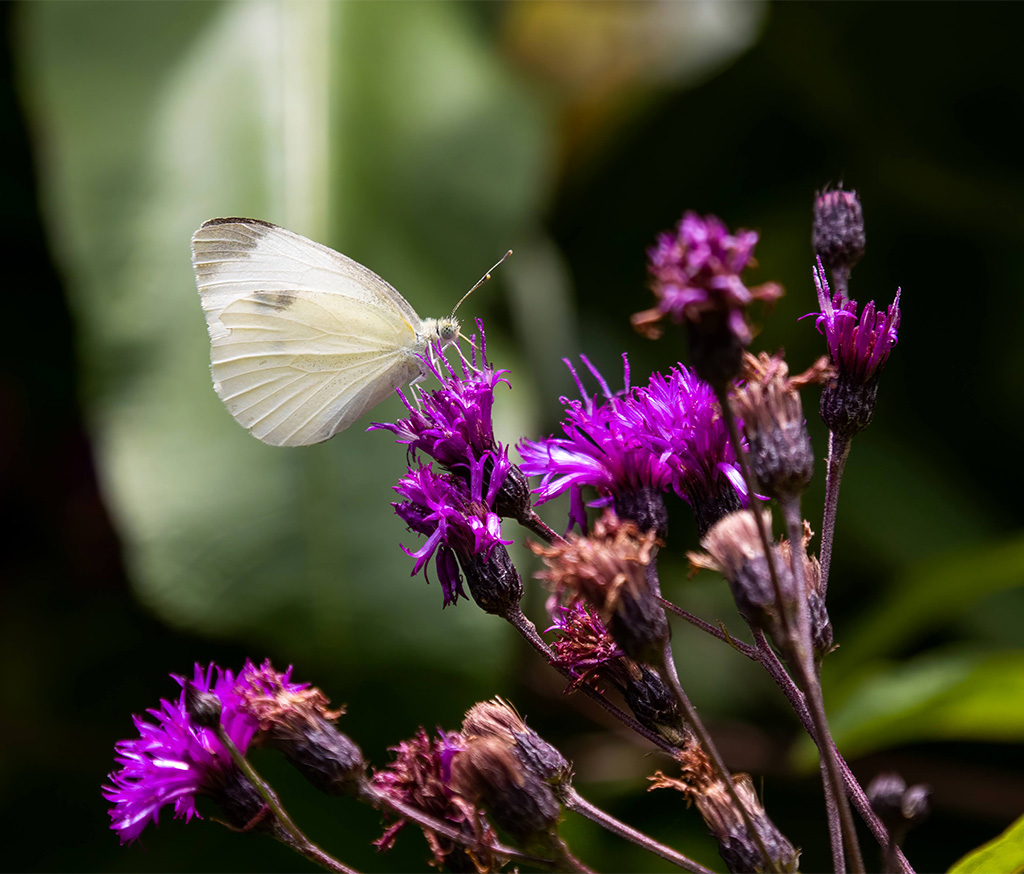 Male cabbage whites have one spot on each wing. (Photo: Richard George)

Cabbage whites avoid cool, shady areas, and females do not lay eggs when the weather is cloudy or rainy. In other words, these butterflies like sunny weather. A female cabbage white lays more than 300 eggs. In Massachusetts, there are usually three generations of butterflies per season, so one single butterfly could produce millions of great grandchildren every summer if there were no predators (which of course is not the case). 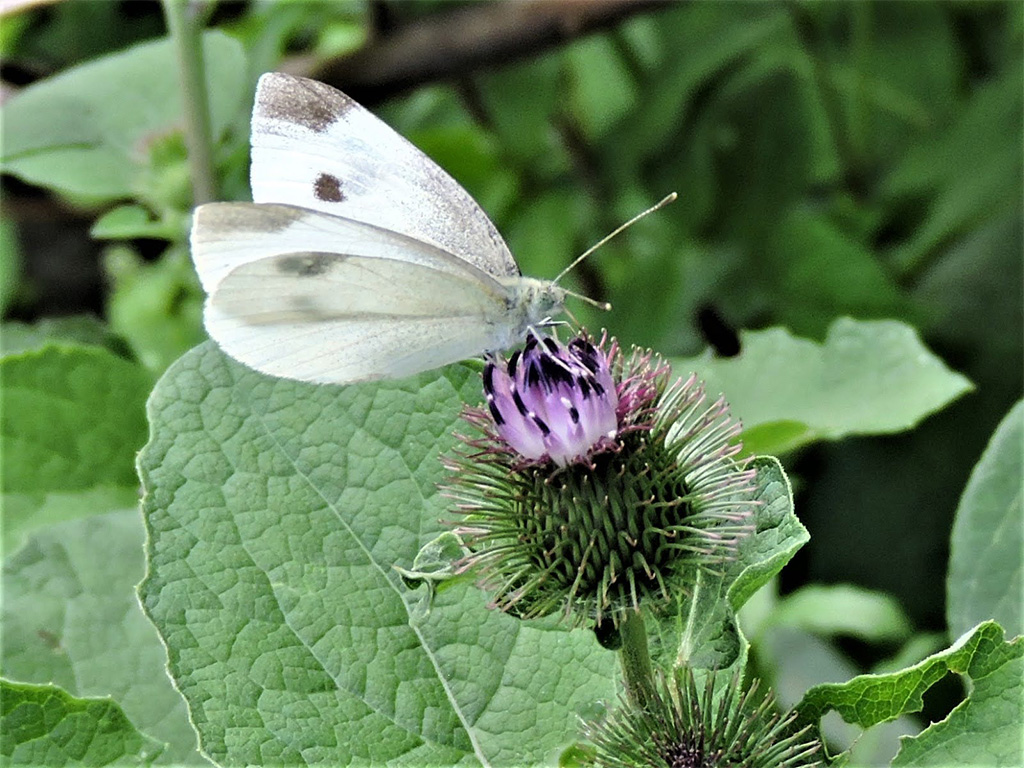 Cabbage white butterflies are prey to birds such as house sparrows and goldfinches. (Photo: Richard George)

Plants in the cabbage family produce a sulfur-containing compound that releases a pungent oil when the plant is damaged, such as when an insect bites it. This oil repels most insects, but cabbage whites tolerate it and thus have followed cabbages around the globe. 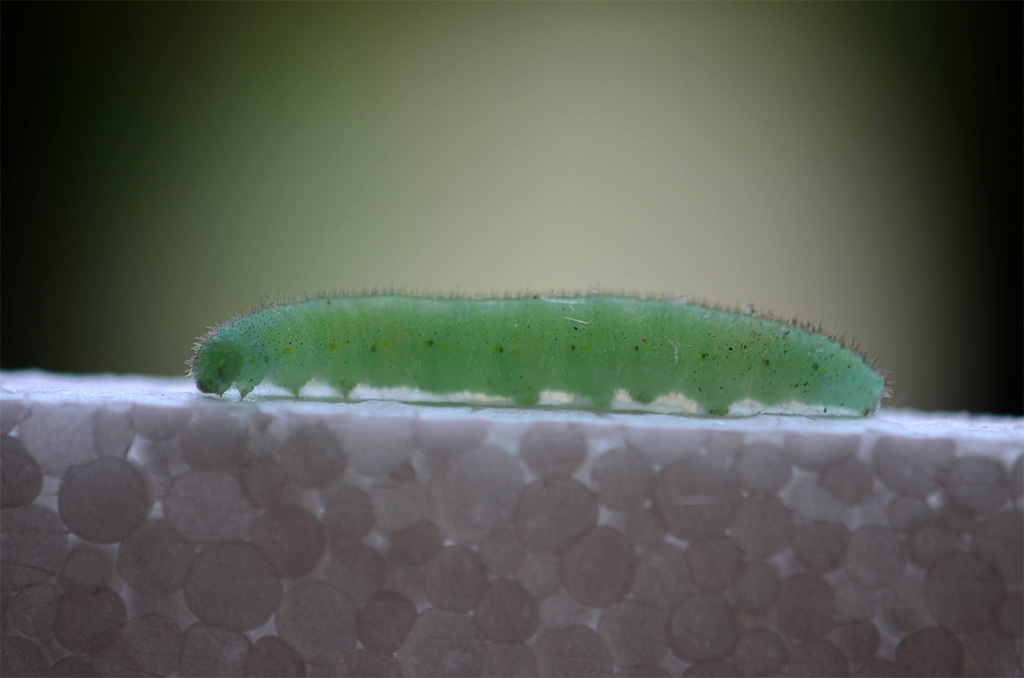 Another control method involves using genetically engineered plants to produce this Bt toxin. Scientists isolated the genes that produce the Bt toxin in 1982 and by the mid-1990s had developed Bt corn to kill corn borers. Today more than 90 percent of corn grown is GMO corn, which is why you do not see caterpillars in corn these days. (When I was young, we often found caterpillars in corn when we shucked it.) If you do find corn borers in your corn – at a farmer’s market, for example – it’s a sign the corn is not genetically modified. 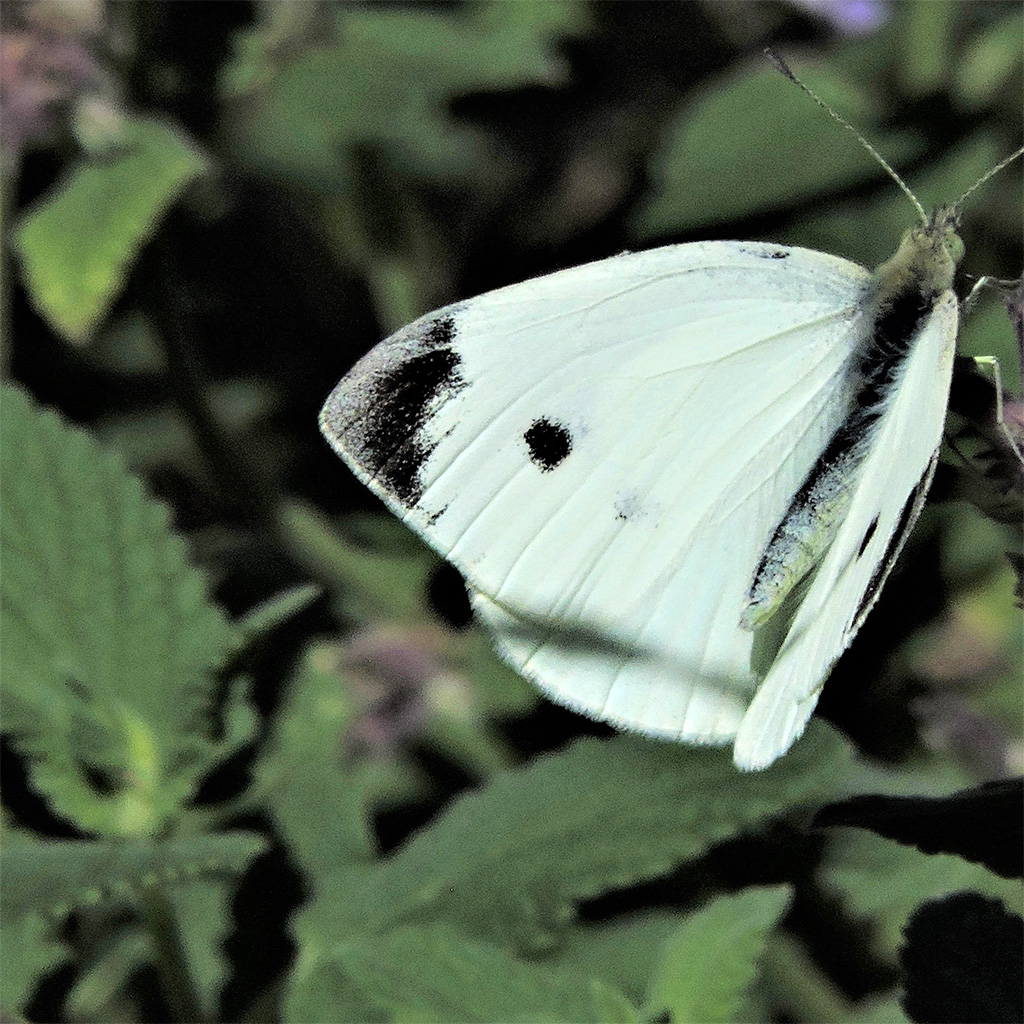 The scientific name for cabbage whites is Pieris rapae. Rapa is Latin for turnip, one of the plants of the mustard family. (Photo: Ann Schlesinger)

Cabbage whites are tricky, however. They make their own toxins to discourage predation, and they eat plants (cabbages) that are toxic to most other predators. Despite this, however, only about 10 percent of cabbage white caterpillars survive to the chrysalis stage. Beetles and daddy longlegs eat the smallest caterpillars. Birds eat about 20 percent of the larger caterpillars. Most of the rest of the caterpillars are consumed by wasps. Wasps kill some caterpillars directly, but mostly they lay eggs on the caterpillars. When the eggs hatch, the larvae eat the caterpillars from the inside, saving the vital organs for last. There are about 4,000 wasp species in the United States, and it is estimated that they prevent $20 billion in crop damage each year. 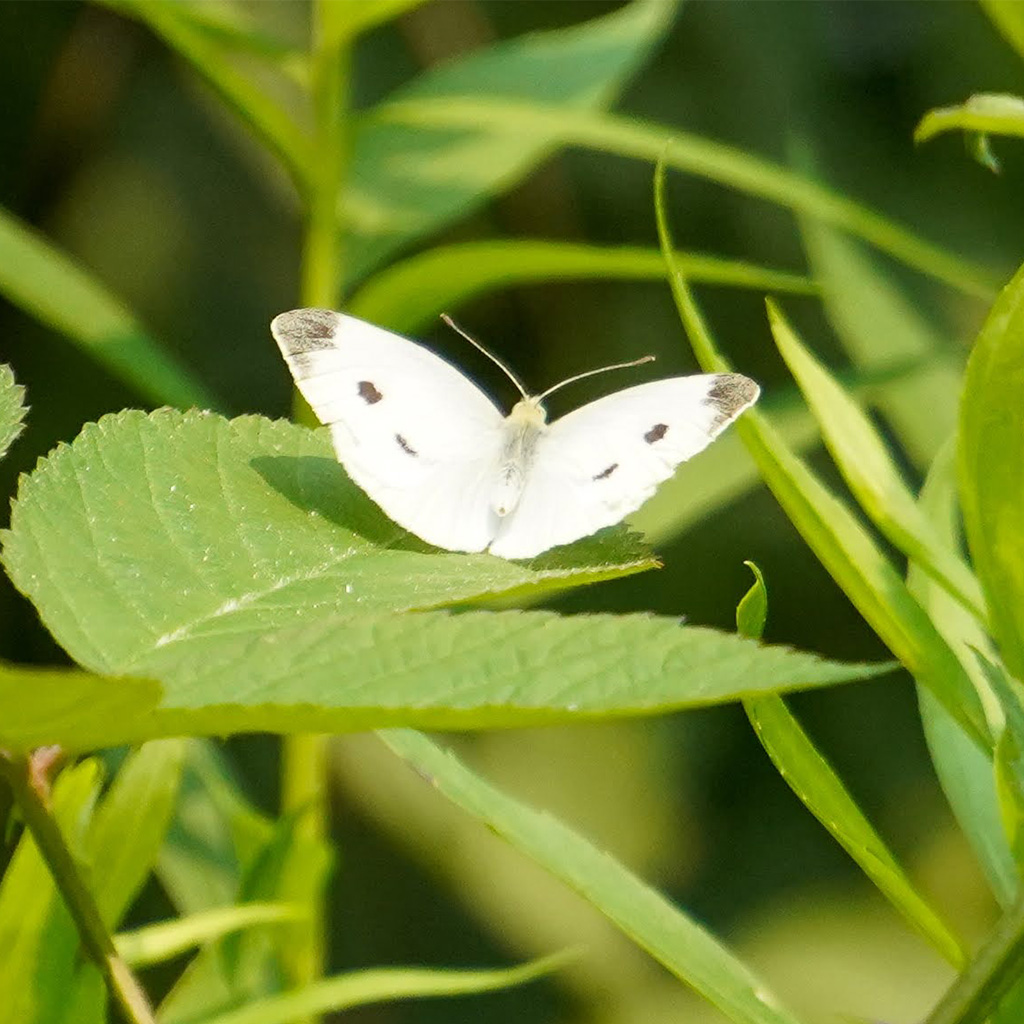 Cabbage whites have a dark spot on the upper forewing. (Photo: Ann Schlesinger)

There are three native white butterflies in the Northeast. They have declined greatly during the past 150 years, perhaps due to the introduction of the cabbage white, but more likely due to our planting of nonnative cabbages and mustards that native butterflies are not adapted for. Decline of habitat and introduced parasites probably also play a role.

Despite concerted efforts to control cabbage whites, there are still plenty around. They are the most common butterfly in North America and probably the world. Unless people stop eating cabbages, these butterflies are most likely here to stay.