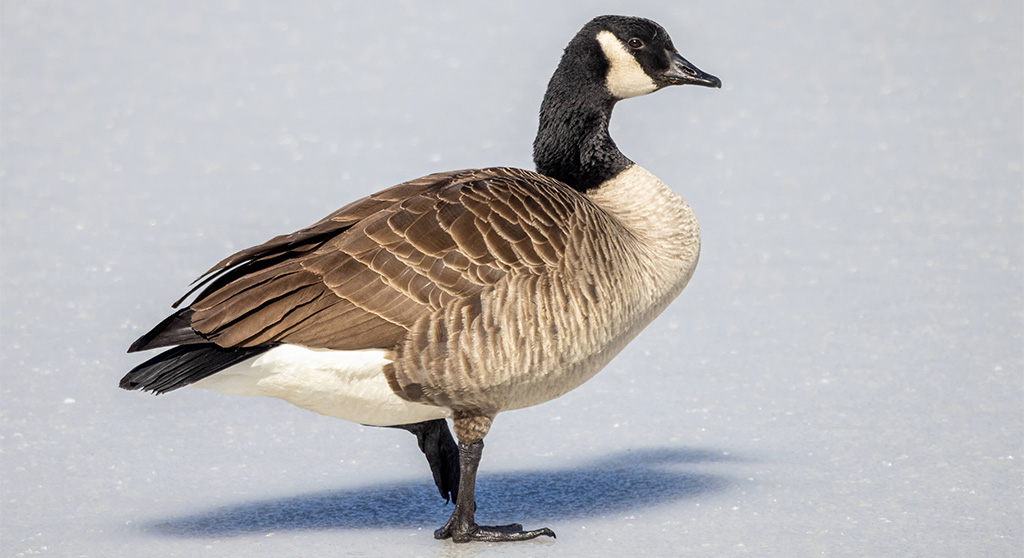 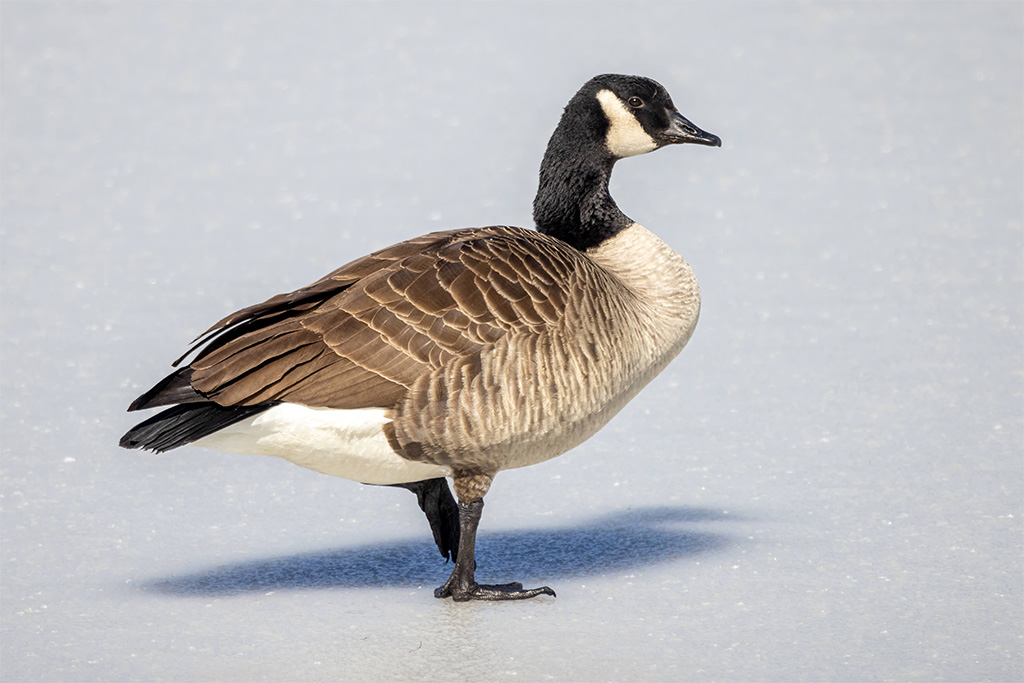 A Canada goose has a black bill, a black head and neck with white cheeks and chin, and a brownish body. (Photo: Richard George)

Canada geese seem ubiquitous these days and, in fact, there are more Canada geese (Branta canadensis) now than at any time in human history. In the 1800s, the seemingly limitless flocks of migrating geese heartened commercial waterfowl hunters. To lure migrating geese, these hunters captured a few, clipped their flight feathers and sometimes added weights to their legs. These live decoy geese fooled migratory geese into believing it was safe to land; when the geese landed, hunters shot them.

This process worked well and was extremely effective, so that by the 1900s, overhunting left Canada geese on the brink of extinction. The goose population had decreased so much that by the 1930s, lawmakers outlawed using captured geese as decoys. Goose hunters released their captured decoy geese into the wild, but since these birds were not used to migrating, they nested where they were released rather than flying to Canada. 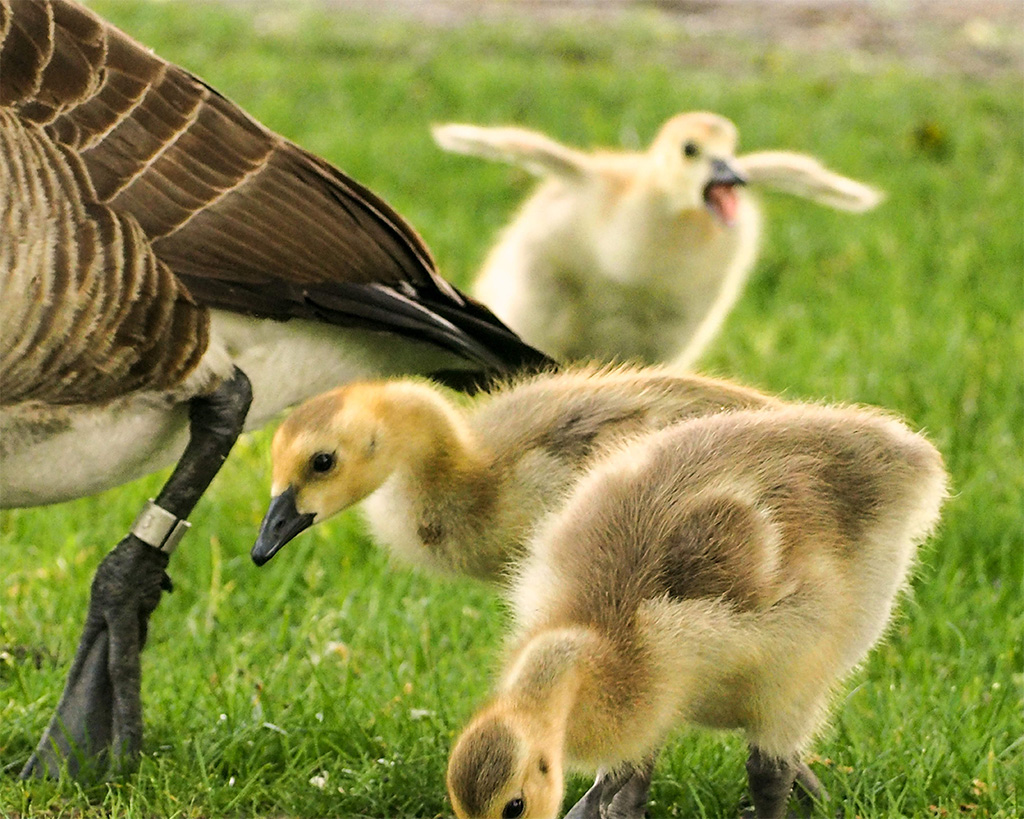 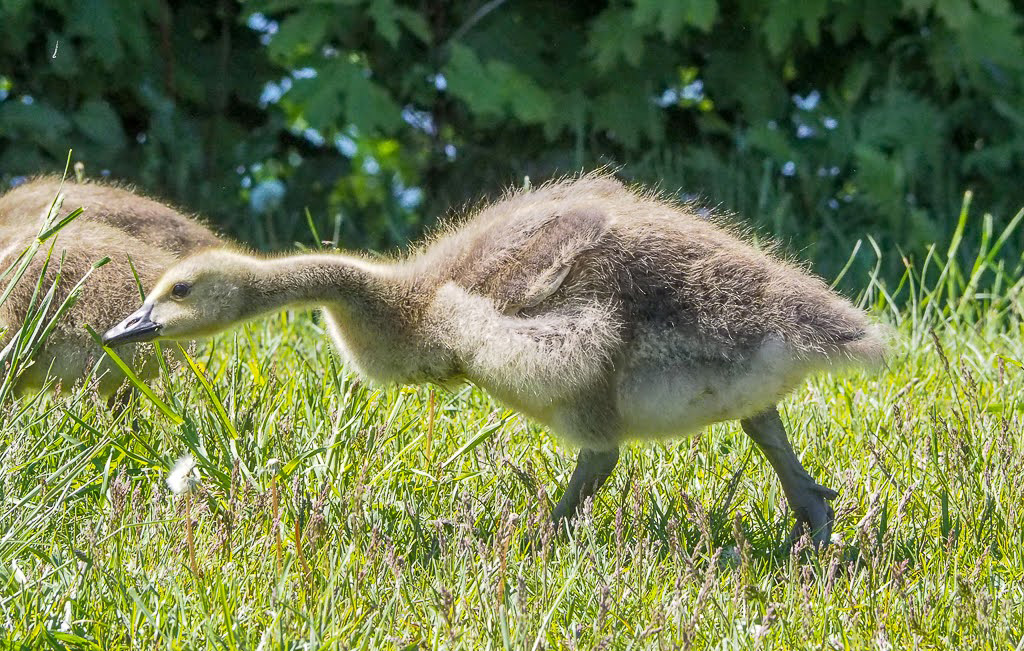 Geese are most vulnerable during the summer, as young geese cannot fly yet, and adults are molting, so they cannot fly either. (Photo: Jeanine Farley) 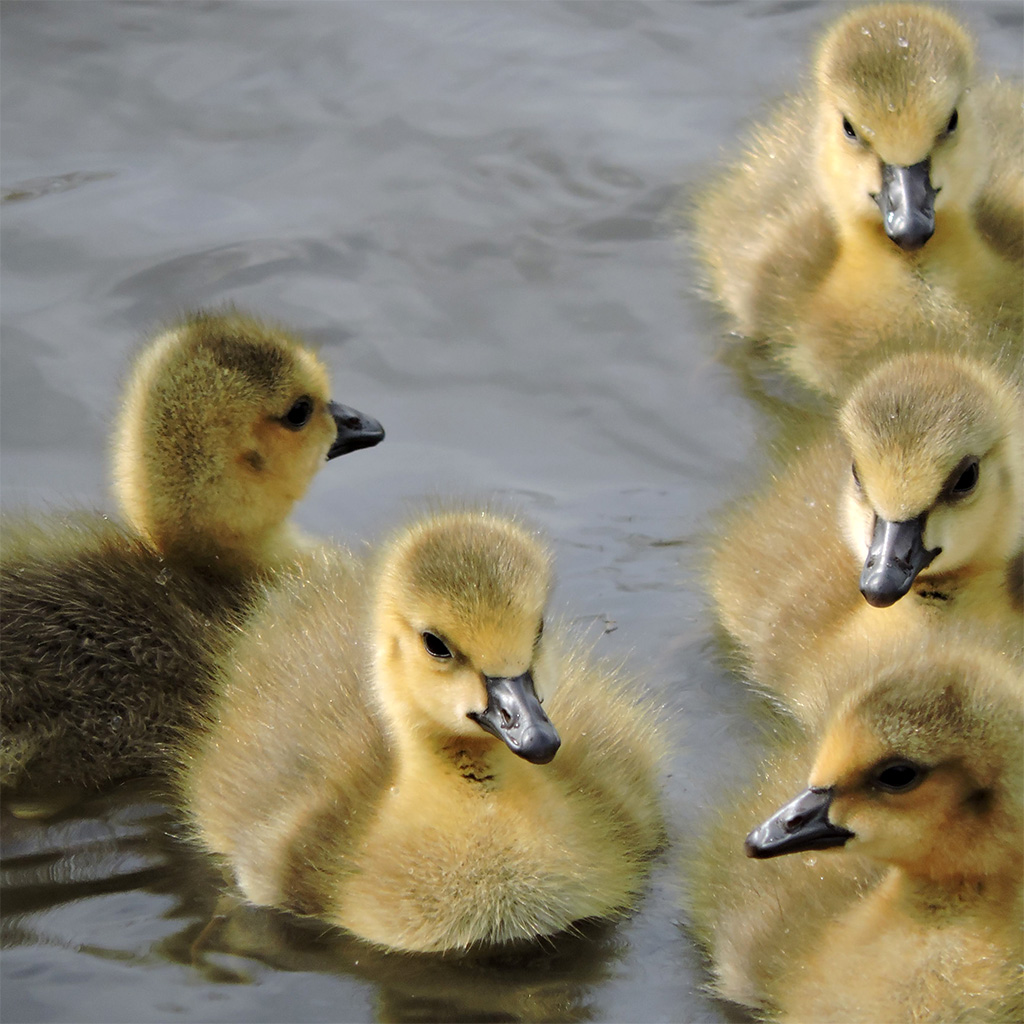 Geese are most vulnerable during the summer, as young geese cannot fly yet, and adults are molting, so they cannot fly either. (Photo: Jeanine Farley)

By the 1960s, federal and state wildlife managers were worried by the failure of migratory goose flocks to recover and went to great lengths to bolster the population. In the 1960s and 1970s, MassWildlife moved geese from coastal areas into central and western parts of Massachusetts. At the time, only 10 percent of geese were nonmigratory. A goose population explosion soon ensued, as geese need only two things to survive: food and open water on which to sleep, both of which Massachusetts supplied in abundance. Unfortunately, these new populations of geese never developed the urge to migrate. Today the nonmigratory goose population accounts for 60 percent of all Canada geese in the Atlantic flyway. 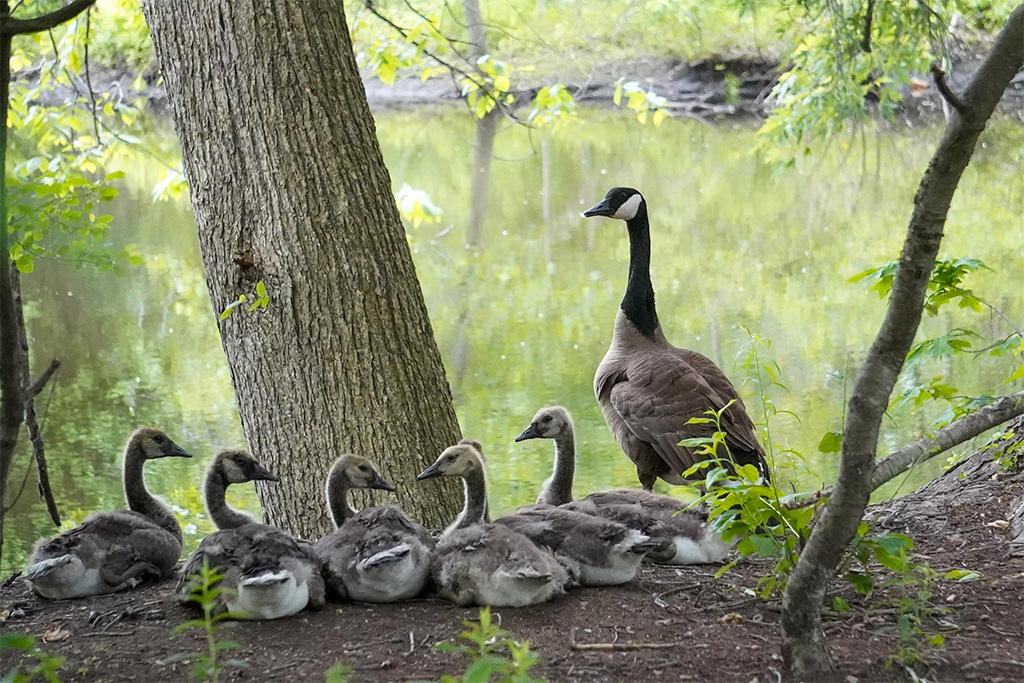 Today Canada geese are often considered pests because of their habit of congregating in large numbers on grassy areas that people like to use, their messy dropping that contaminate waterways and their aggressive behavior when begging for food or defending their young. If you have been hissed at by an aggressive Canada goose, you have probably wisely decided to give it a wide berth. The increase in the goose population is partly due to the removal of predators and partly due to the increase in cultivated grassy areas and agricultural fields where geese find food. 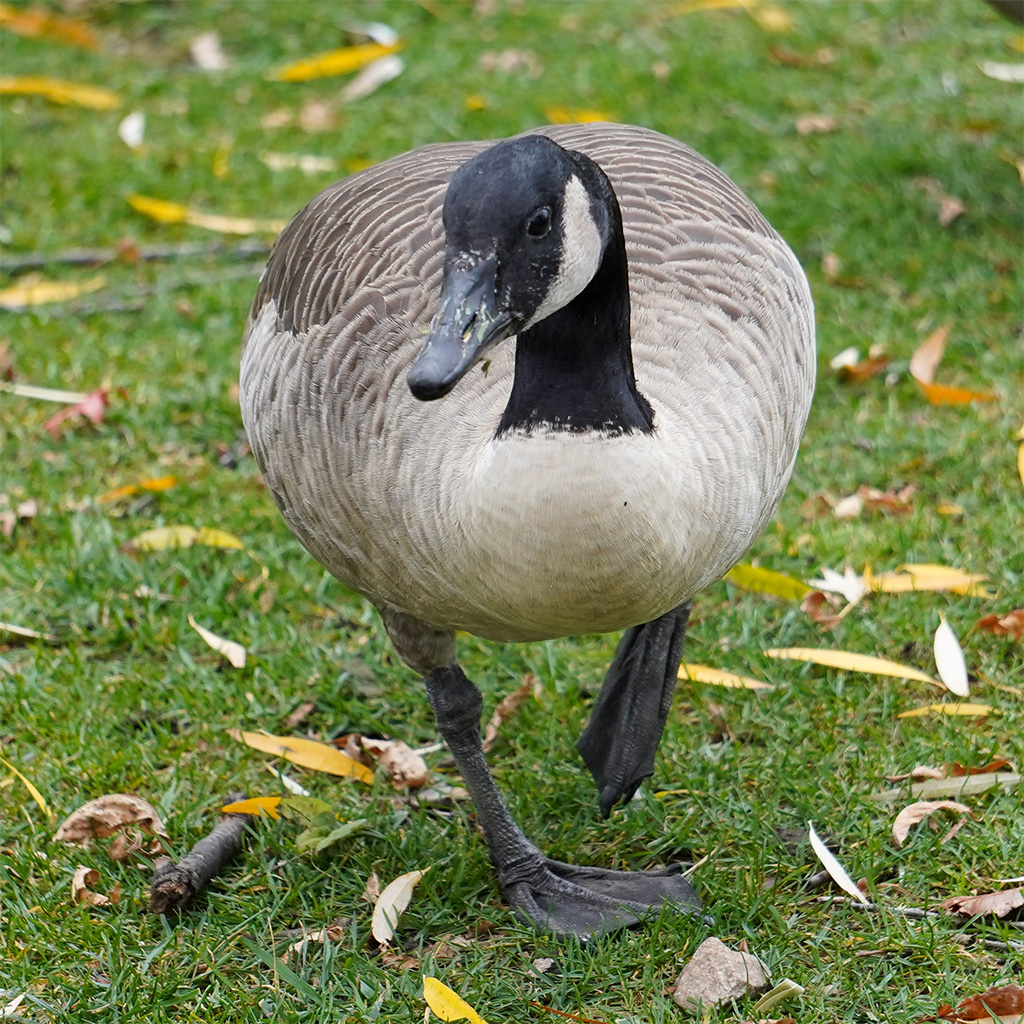 Canada geese are the only species of goose that breeds in Massachusetts. (Photo: Jeanine Farley)

Canada geese are herbivores. They eat green vegetation and sedges, berries and grains. On land, as you have probably witnessed, they eat many types of grasses. In the water, they feed on aquatic plants and algae. In urban areas, Canada geese prefer lawn grass. They graze in open areas to avoid predators. 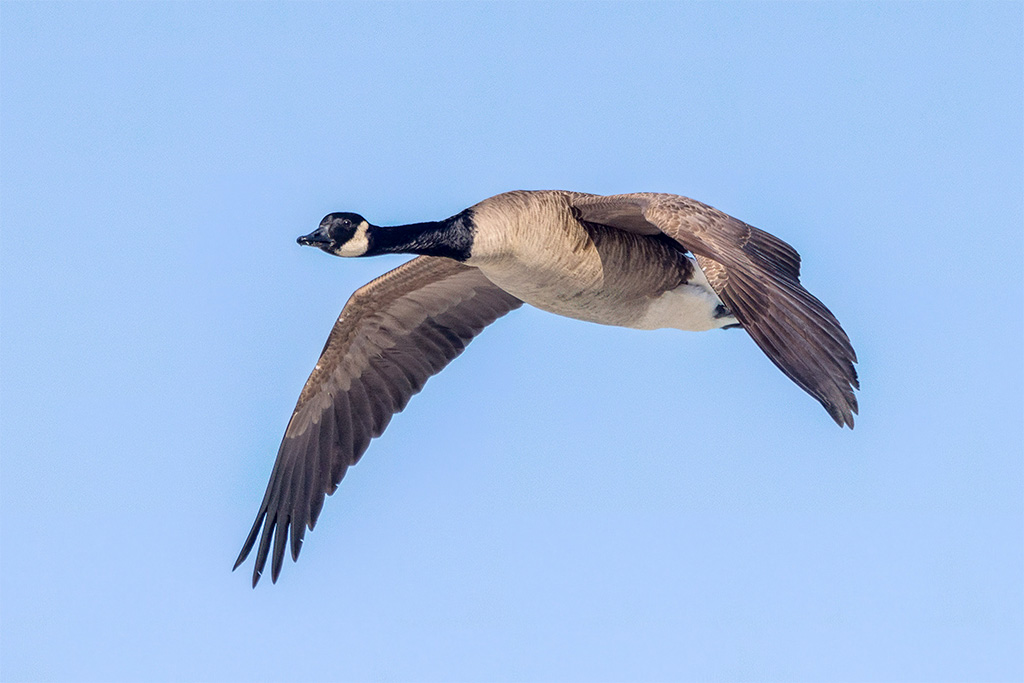 In the early spring, the female Canada goose selects an elevated spot near water for a nest site. She lays one egg per day for four to six days. The male guards the nest aggressively. In May, the goslings hatch. The goslings can walk, swim and feed themselves almost as soon as they hatch; however, they cannot fly until August, so they are vulnerable to predators.

We see migratory Canada geese only when they pass through in the spring and the fall. They breed in Canada in the spring and migrate south in the fall. Migratory geese fly in a V-formation, each slightly higher than the bird in front of it. Geese have a blind spot directly behind their heads, but if each flies slightly higher than the one in front, the flying geese can see every bird in the flock, even the ones behind them. 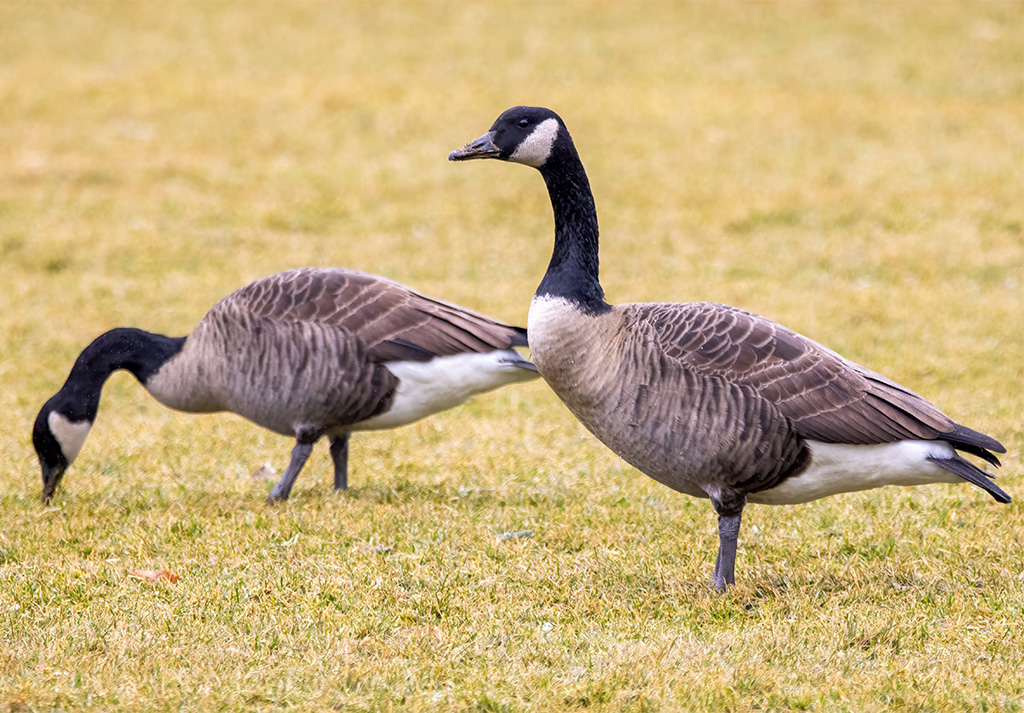 Canada geese on a lawn in North Cambridge. One goose produces about a pound of droppings per day. (Photo: Richard George)

Because of climate change, migrating Canada geese are beginning their migrations later than ever. They also do not fly as far south as they used to. Migratory Canada geese are showing a northward shift in their range.

In 1995, the Massachusetts Fisheries and Wildlife Board enacted special goose-hunting seasons designed to cull the nonmigratory populations. Hunting seasons occur before and just after migratory geese have flown south (in September and again in late-January). Studies show that for the goose population to be controlled, 30 percent to 35 percent of the birds must be culled each year. Currently, hunters take about 25 percent. 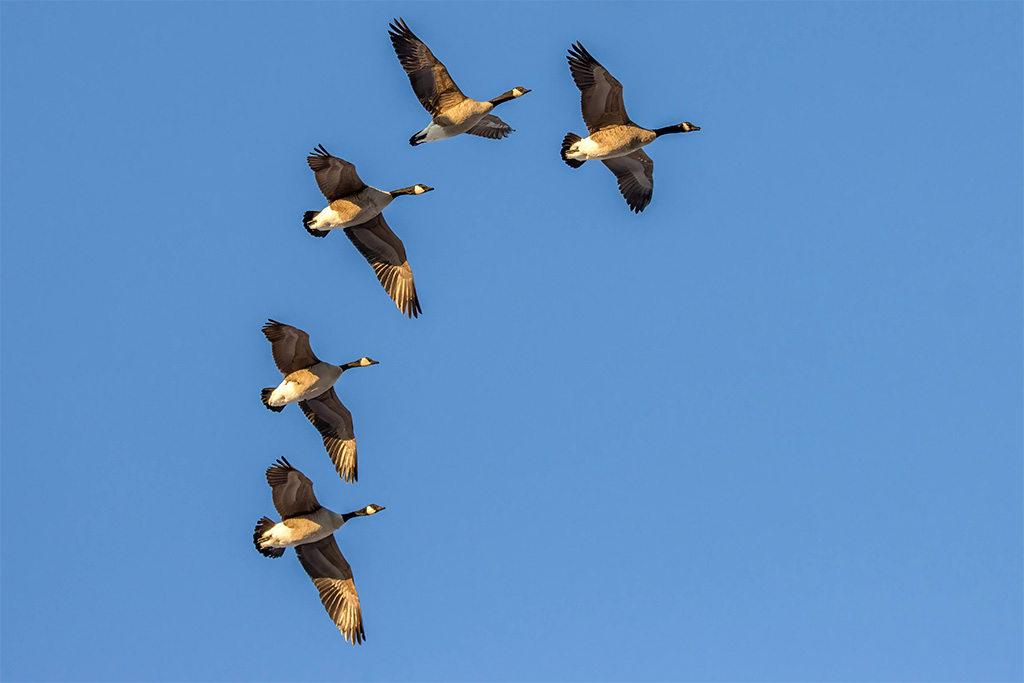 Since the early days of this nation, humans have affected the Canada goose population, often in unforeseen ways. From near extinction in the 1900s to an overpopulation of non-migrating geese today, we have only human intervention to blame. What will happen to Canada geese populations in the future? Humans will be most certainly be involved.