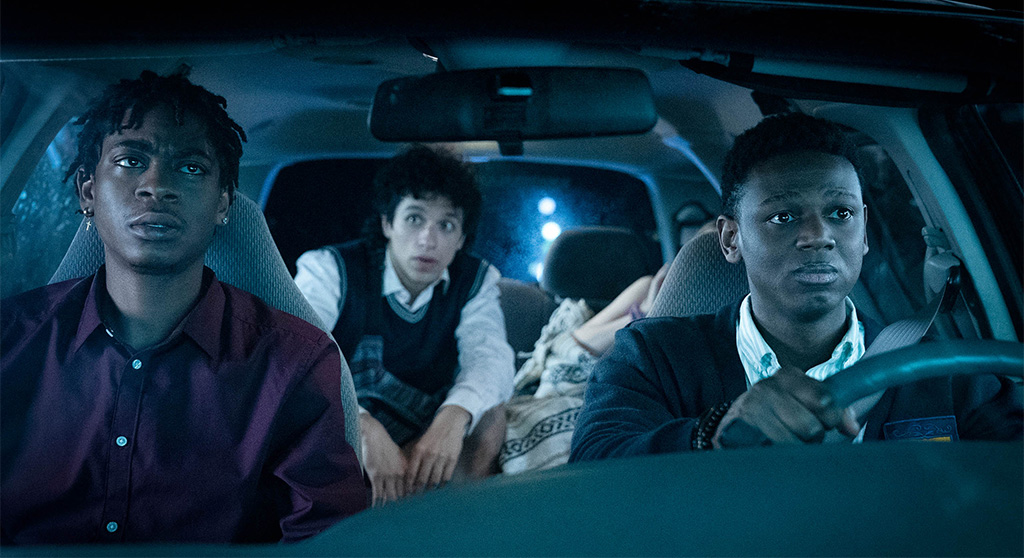 Clutch character actor Fred Ward died this month. Best known for his turn as Gus Grissom in Phillip Kaufman’s adaptation of Tom Wolfe’s space race saga “The Right Stuff” (1983) and pairing with Kevin Bacon in the cult hit “Tremors” (1990), Ward never really got to fully own the limelight – the 1985 screwball thriller “Remo Williams: The Adventure Begins” never took off into a franchise. The affable actor had an indelible drawl and a twinkle in his eye that brought avuncular charm and a quiet, troubled brooding to the screen. Some favorites are his turn as one of a weekend-warrior trio who find a woman’s body on a fishing trip in Robert Altman’s great adaptation of all things Raymond Carver, “Short Cuts” (1993), and that other quirky Fred Ward film of 1990, “Miami Blues,” in which Ward plays a cagey cop with false choppers out to take down a dashing sociopath (Alec Baldwin). “Miami Blues” is free with Prime on Amazon; “Short Cuts” isn’t available for streaming, so if you see it playing in a theater or TV listing, make it a priority.

For Asian American and Native Hawaiian/Pacific Islander Heritage Month, the hive mind at the Day has a few screening suggestions beyond the basic go-tos of “The Joy Luck Club” (1993), “Crazy Rich Asians” (2018) and all things Kurosawa. Focusing on recent raves that are easy finds, we came up with five broad-ranging selections. First up are two emotionally riven love triangles from Ryûsuke Hamaguchi: “Wheel of Fortune and Fantasy” and Academy Award-winner “Drive My Car,” Hamaguchi’s dutiful adaptation of Haruki Murakami’s short about male grief and redemption. Impressively, Hamaguchi turned out both films in 2021. “Wheel” is the more plot driven, but both are superbly acted and orchestrated. The key to “Drive My Car” comes in Hidetoshi Nishijima’s soulfully immersive performance as a grieving theater director trying to move on and needing a full-time chauffeur. The film gets equally impressive efforts from Tôko Miura and Reika Kirishima as the designated driver and unfaithful wife, respectively. You can get the films through Amazon. On topic and on point is Lee Isaac Chung’s semi-autobiographical “Minari” (2020), about a Korean family that transplants from L.A. to rural Arkansas in the 1980s to farm vegetables and is confronted by racism. The ensemble work here by Steven Yeun (“The Walking Dead” and “Burning”), Yeri Han, Alan Kim (as Chung’s 7-year-old self) and Youn Yuh-jung as the transplanted Korean clan – with Will Patton as an overly religious, out-of-work farmer who throws in with the family – is quietly impressive and grows organically. Youn, playing the feisty nana that the children say “smells like Korea,” won Best Performance by an Actress in a Supporting Role at the Academy Awards, making her the first Korean actress to win an Oscar. The film was also nominated for Best Picture, and Chung for Best Direction. It’s on Showtime, watchable through Amazon Prime Video.

Need to get out of the house and want to beat the heat? Still playing in theaters (Kendall and Somerville) is “Everything Everywhere All at Once,” the gonzo meta-multiverse romp from Dan Kwan and Daniel Scheinert (“Swiss Army Man”) about an Asian immigrant mom (a sublime Michelle Yeoh) trying to save her laundry biz from a pesky tax auditor (Jamie Lee Cutis) as well as unify her fractured family – who gets to tap into her alternative selves to help sway the struggle. Lastly, there’s something for the whole family: the slightly controversial “Turning Red,” which you can stream on Disney+. Why controversial? There’s the metaphor of the title – folks need to get over that – and that bigoted review that said no one but Asian girls would see the film (wrong!). “Red” is a punchy Pixar product about a tweener who inherits the family’s female curse, in which intense emotions turn her into a giant red panda. It’s perfectly balanced, full of family values and, hey, it’s got big boy-band love and a fiery nana too. “Minari” made the Day’s top 10 films of 2020 and “Drive My Car” was our top pick of 2021.

Pairing with Harvard University’s commencement time, The Brattle kicks off “Reunion Week” – films that have 75-, 50- and 25-year anniversaries. First up for the class of ’47 on Wednesday is Jacques Tourneur’s noir “Out of the Past,” starring Jane Greer, Kirk Douglas and Robert Mitchum; it’s with the absolutely infectious “Romy and Michele’s High School Reunion,” though it’s hard to believe the Lisa Kudrow and Mira Sorvino comedy hit is 25. At the 50-year mark, there’s Peter Yates’ “The Hot Rock,” in which ex-con Robert Redford get roped into a job by brother-in-law George Segal. It plays Thursday alongside Cindy Sherman’s gory cult curio, “Office Killer” (1997), with Carol Kane, Jeanne Tripplehorn and Molly Ringwald in the eclectic cast. Friday it’s Rainer Werner Fassbinder’s “The Bitter Tears of Petra von Kant” for the class of ’72, along with Brian Robbins’ fast-food funny farce “Good Burger” (1997), starring Kenan Thompson and Kel Mitchell as burger flippers; Abe Vigoda and Carmen Electra are in the cast. On Saturday, things kick off with 1997’s “Princess Mononoke,” the animated masterpiece (one of many) from Hayao Miyazaki about a girl raised by wolves, and go to the dark side with one of my very favorite Hitchcocks, “Frenzy” (1972). The disturbing subject matter of a woman-predating serial killer is rendered palpably and viscerally enough to make this the director’s most brutally real and painfully intimate film. Also on the Saturday slate is Charlie Chaplin’s “Monsieur Verdoux” (1947), also about a serial killer, in which the Little Tramp plays a charming social climber with murder in his heart.

There’s more “Forgotten Filmmakers of the French New Wave” this week at the Harvard Film Archive with three shorts from Jean-Daniel Pollet tonight: “Mediterranean” (1963), “As Long as You Get Drunk” (1958) and “Gala” (1961). Roger Leenhardt’s “The Last Vacation” (1948) plays Monday with comedies “Snobs!” (1962) by Jean-Pierre Mocky and “Sentimental Education” (also ’62) by Alexandre Astruc on Friday, and “The Long Absence” (1961) by Henri Colpi on Saturday.

Well this makes me happy as a hog in slop: The Somerville Theater is playing one of my all-time favorites, Sam Peckinpah’s reshaping of the Western, “The Wild Bunch” (1969), not once, but twice. That’s two times, count ’em, and a 70 mm print to boot. What makes the “Bunch” so special? The opening and closing shootout sequences, brilliantly choreographed and kinetically edited. The casting of Willam Holden and Ernest Borgnine as two grizzled outlaws pursued by a former colleague turned lawman (Robert Ryan) is also beyond inspired, as are the themes of the “bunch” operating by a more earnest and honest playbook than their institutionalized counterparts, despite it being clearly archaic in the face of flight and other disruptive technologies of the era. (The time is the eve of World War I, as Mexico is in a state of rebellion led by Pancho Villa and the Germans are there to sway the balance.) The film’s flawless in pretty much every frame, and backstory and emotional heft is packed in without an ounce of flab. Between Peckinpah and Sergio Leone the western was born anew in the 1960s, with moral ambiguity replacing black-and-white morality and every round fired from every chamber hitting their targets with profound impact. “The Wild Bunch” plays tonight with Robert Aldrich’s great “Vera Cruz” (1954), which also has American fortune-seekers caught up in a Mexican conflict – this time the Franco-Mexican War of 1861-1867). Burt Lancaster and the square-jawed Gary Cooper lead this “bunch” looking for a big payday by escorting a countess to the city of the film’s title to finance reinforcements from Europe. Besides the thematic similarities, the film is said to have paved the way for “The Wild Bunch” and Leone’s quirky, dark Spaghetti Westerns. The cast includes Charles Bronson, Jack Elam and a future Bunch-er, Borgnine. Like “Short Cuts,” it’s hard to find on any streaming platform, so this is your big chance.

The 48 Hour Film Project sets up for screenings Monday and Tuesday of its quickly crafted, locally shot, mini masterpieces; Wednesday’s “Hard Boiled Double Feature” is a double shot of Sterling Hayden in Stanley Kubrick’s racetrack heist caper “The Killing” (1956) and John Huston’s gritty noir, “The Asphalt Jungle” (1950). That gives you one of the best tough guys working with two of the best filmmakers of the time. (Hayden would again work with Kubrick on “Dr. Strangelove or: How I Learned to Stop Worrying and Love the Bomb” in 1964.) “Asphalt Jungle” put the spotlight on Marilyn Monroe, a relative unknown at the time she was cast as the moll.

Remember “House Party” (1990), in which the hip-hop duo Kid ’n Play fell into misadventure just trying to have a good time? Same thing here as an A college student named Kunie (Donald Elise Watkins), his stoner buddy Sean (RJ Cyler), both Black, and their goofball roomie Carlos (Sebastian Chacon), a Latino, discover a young white female student (Maddie Nichols) passed out on the floor of their off-campus digs. The realization throws a small bone in Sean’s big plan for he and Kunie to become the first two Black students to make it to all seven elite, invite-only end-of-year socials taking place that night. What to do about that girl face down on the floor? Calling 911 is the easy answer, but then again, being Black … the trio decide to do a hospital drop-and-go, but the ER becomes an elusive destination as people are out looking for the wayward girl, the police are everywhere and, for the three friends, so is the fear of being shot. It doesn’t help that they’re nipping and partaking throughout. It’s a fair updating of the nightmarish, never-ending, only-gets-worse night that for the most plays it on the comedic side, even if the very real, all-too-true vestiges of George Floyd and blue-on-Black violence add a different tonality. The film goes on a bit too long for what it is, but the dynamic of two friends with very different styles and futures, as well as the “Where did she come from?” factor, hold you in your seat. At Landmark Kendall Square Cinema, 355 Binney St., Kendall Square and on Amazon Prime Video starting Friday.