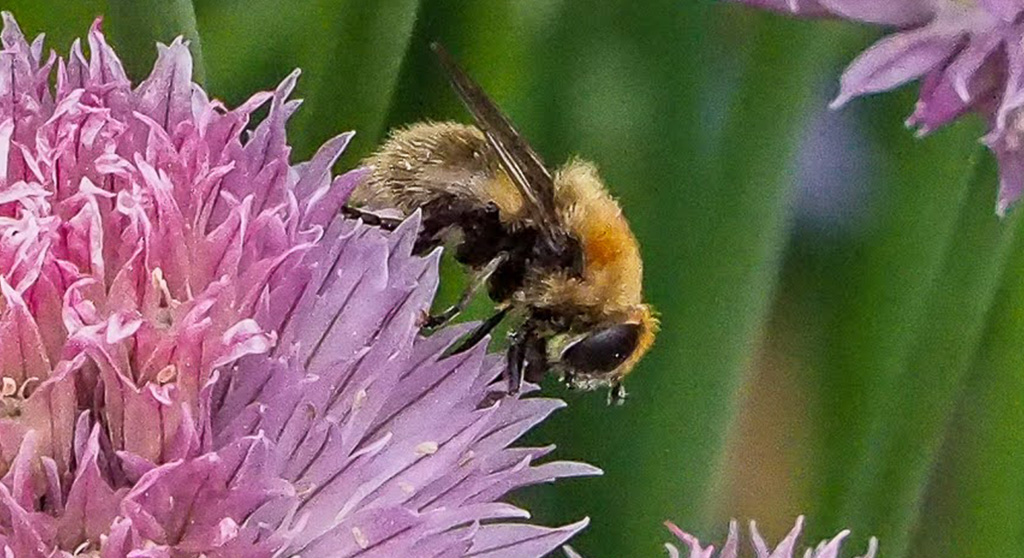 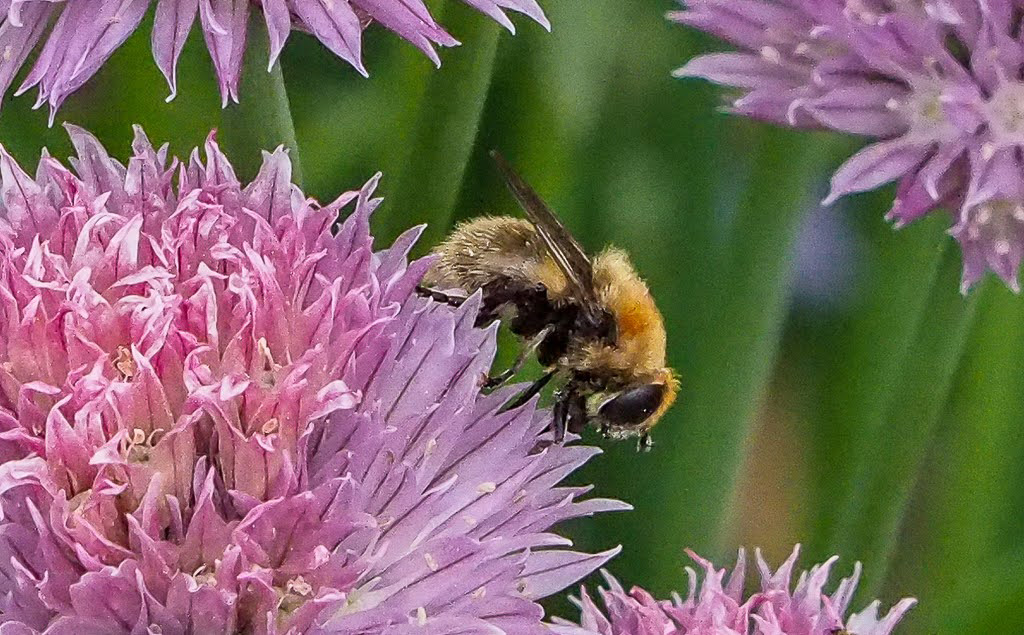 When is a bumblebee not a bumblebee? Perhaps when it is a fly that looks like a bumblebee. The narcissus bulb fly is such a creature. Though it has fuzzy reddish hairs and dark bands, this hover fly has – like all flies – only one pair of wings, and it cannot sting. Its bumblebee impersonation encourages other creatures to leave it alone while it feeds on nectar and pollen from flowers.

As the name implies, you will find these flies near plants in the narcissus family, including the narcissus, hyacinth, iris, lily, tulip, daffodil and amaryllis. Narcissus bulb flies emerge from the soil in May. The males fly low over short grasses in search of females. The females, after mating, get busy laying their eggs at the base of leaves of plants such as tulips and daffodils. 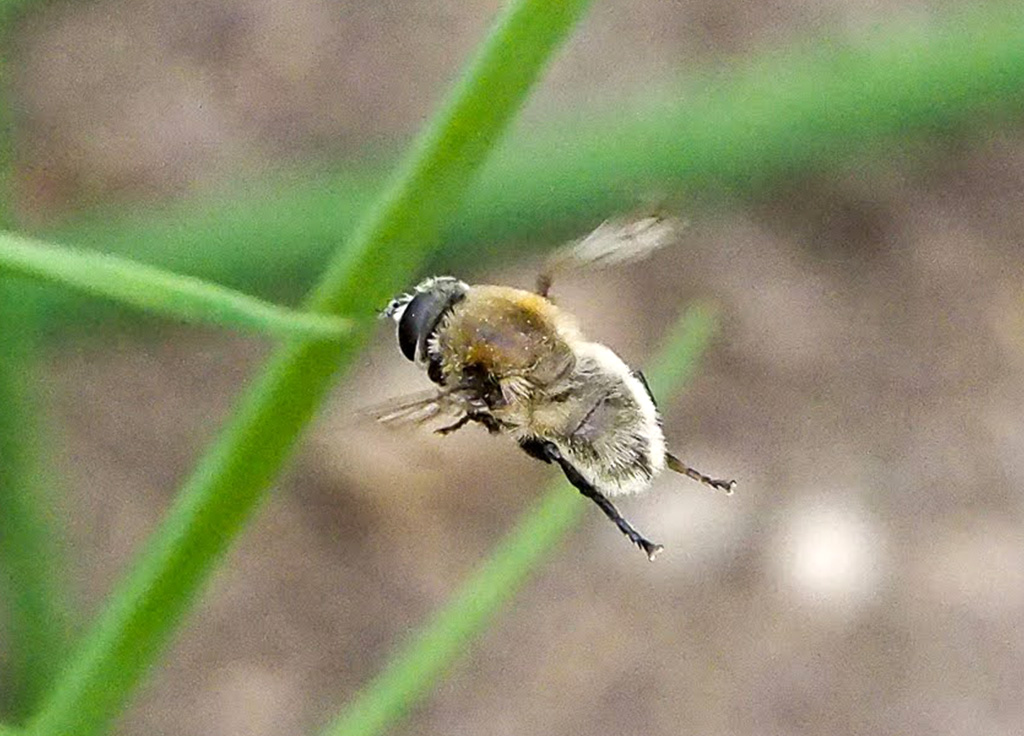 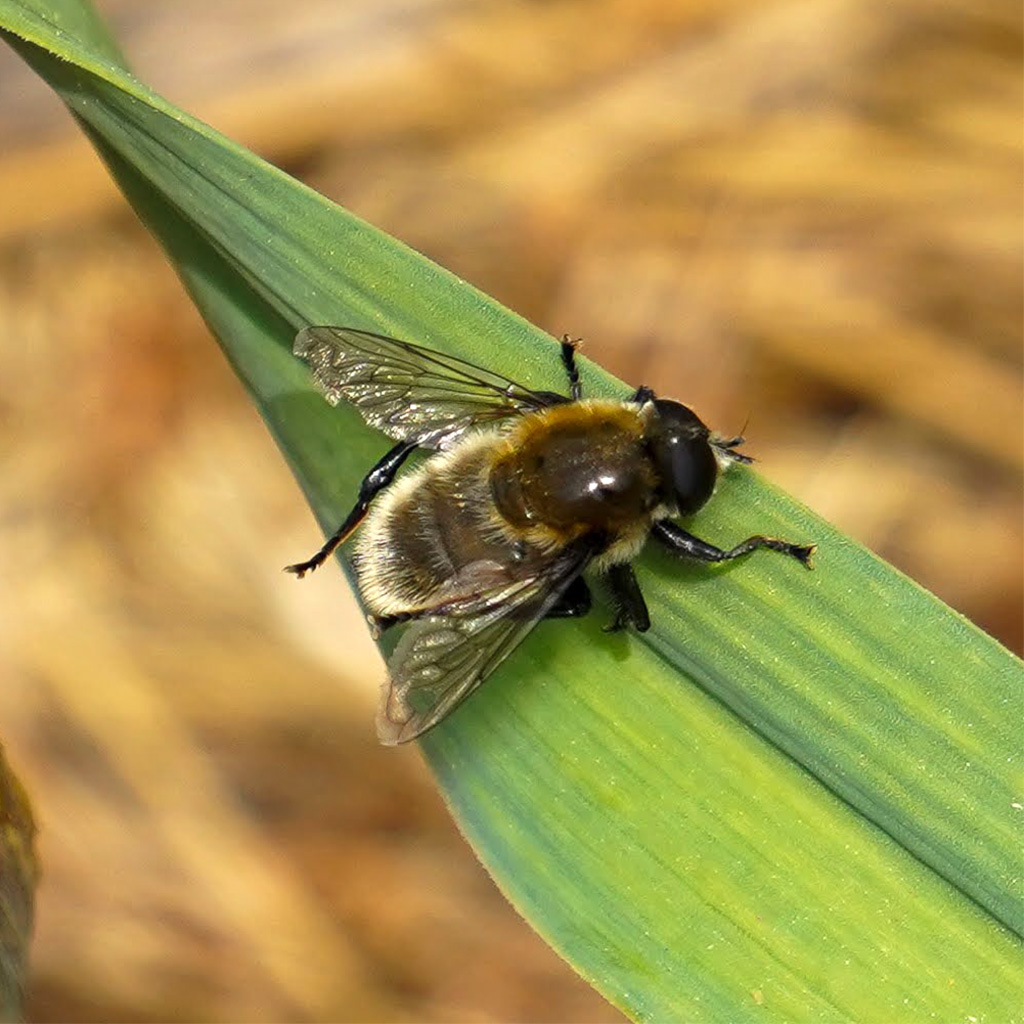 The color of Narcissus bulb flies varies a bit from tan to orange to dark stripes. (Photo: Jeanine Farley)

On each plant, the female lays a single egg, which hatches a few days later. When the egg hatches, the larva, or grub, crawls down to the underside of a bulb and chomps a tunnel to the center, where it hollows out the bulb and consumes the flower bud. The larva feeds for up to 300 days and grows until it is full size by late winter or early spring, then crawls out into the soil. When the soil warms, it pupates, or metamorphoses, in its last larval skin. The skin becomes a tough, brown case; in a few weeks an adult fly emerges from the case and crawls out of the soil – starting the process all over.

Bulb fly larvae usually destroy small bulbs, but larger ones may grow a number of scrawny leaves in the spring. If left in the soil, three growing seasons later the bulb will once again be large enough to bloom. 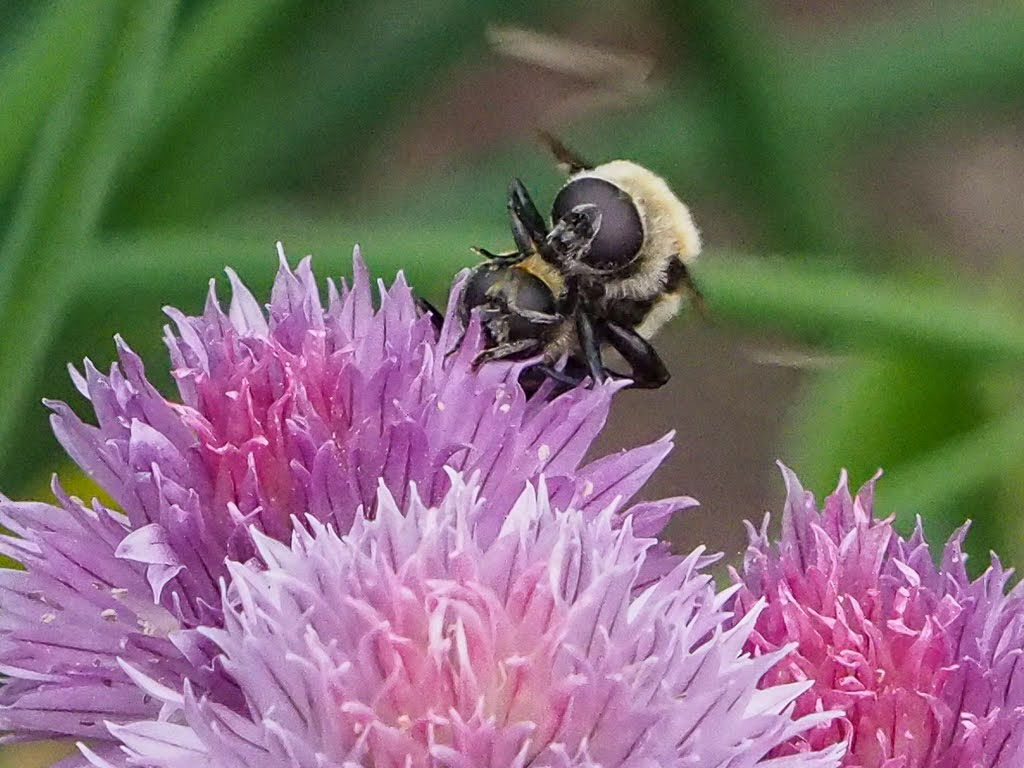 After narcissus bulb flies mate, the female lays eggs at the base of plant bulbs. (Photo: Jeanine Farley)

Bulb flies have been a scourge to gardeners for at least 300 years, and reported in every nation in the world where narcissus plants grow as people share and distribute infested bulbs. An observer first recorded the fly in France in 1738. The fly seems to have been transported from Spain to France to Holland and Belgium and finally to England in 1869. The first reference of the fly in the United States came from Cambridge (of course!) in 1879: A.S. Packard said that in the Agassiz Museum in Cambridge there were bulb fly larvae in bulbs received from a garden in Brookline. Packard said that the fly “appears to have been present in more or less abundance every season since it was first introduced in the place nearly 20 years ago.” 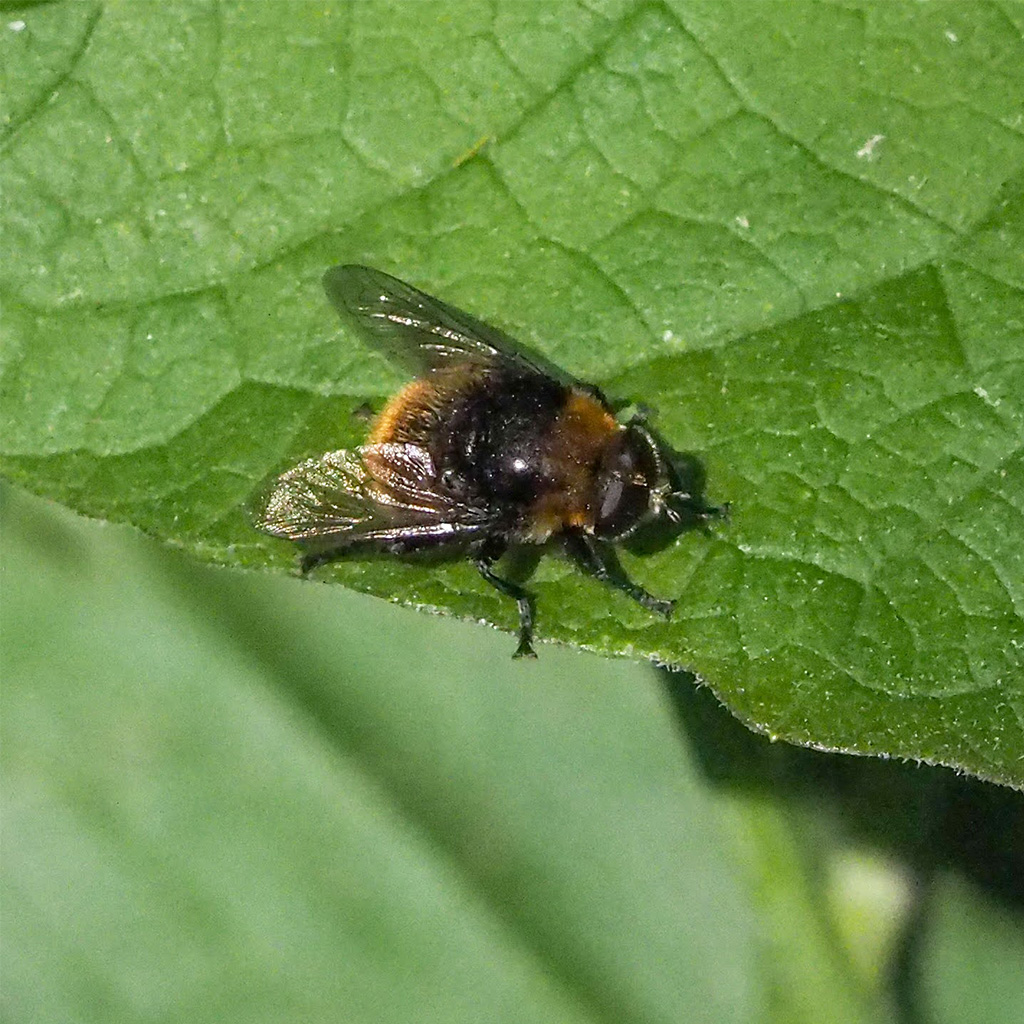 This bulb fly has a dark band to mimic a bumblebee. (Photo: Jeanine Farley)

What if you don’t want larvae devouring your tulip bulbs? After flowering, cut the plant stem down and tamp the soil around the plant to make it difficult for female flies to find leaves on which to deposit eggs. Another approach is to capture the adult flies before they can lay eggs. Bulb flies have no natural enemies; since a female can lay 100 eggs, removing even one fly can make a big difference.

Of course, daffodils and tulips are not native to North America. Early settlers brought them over in an attempt to recreate gardens back home in Europe. But these flowers did not even originate in Europe: They are from the arid regions of Central Asia near the Russia-China border. Amaryllises are native to South America. Lilies originated in China, Japan and North America. 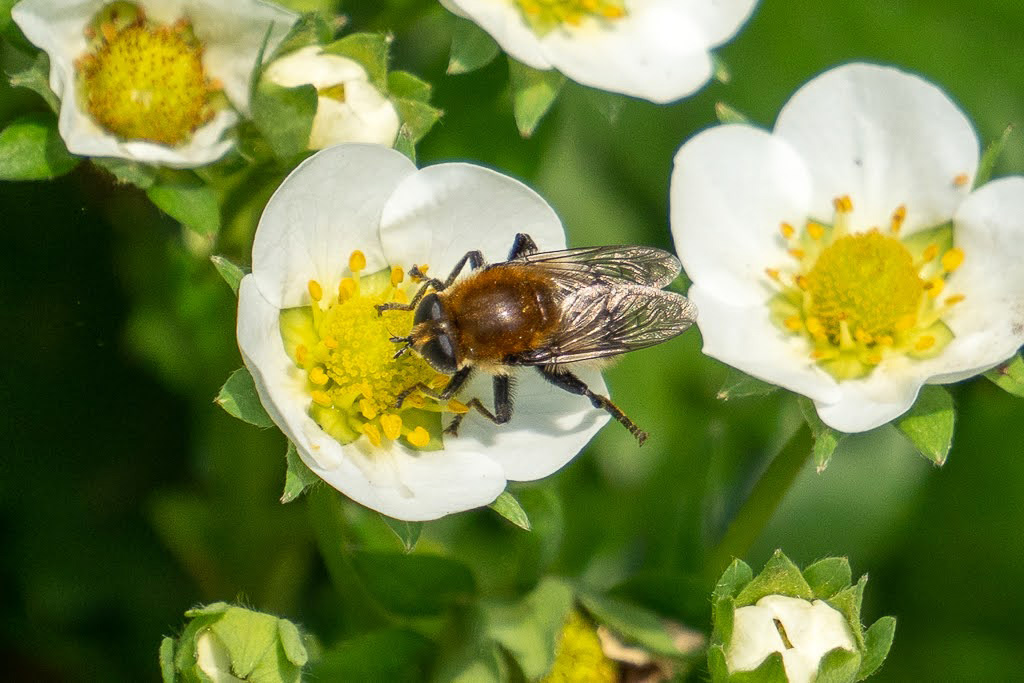 You may have heard of tulip mania in the Netherlands. In the 1600s, the prices of tulip bulbs skyrocketed as hybrid tulips became highly sought after. In 1624, for example, one tulip type had only a dozen bulbs available. Rich residents highly prized such rarity and were willing to pay almost any price for them. As more and more people began trading, the prices rose, and so did speculation. Some prized bulbs sold for more than the cost of a modest home. In February 1637, the market crashed when prices fell about 90 percent.

No one knows what caused this crash, but contrary to popular belief, it did not have a great effect on the nation. The tulip market was a futures market – that is, the bulbs stayed buried in the ground most of the year, and while people made paper trades frequently, they paid only in the summer when the sellers dug up the bulbs. After the crash, buyers refused to accept and pay for their bulbs, or they paid a fraction of what they had agreed upon. The sellers were harmed, of course, but most were merchants and crafters who could take the hit. Prices finally settled at a much more reasonable level. The Netherlands now exports more than 9 million flower bulbs each year, and the United States is one of the biggest importers.

Today there are agricultural regulations designed to keep foreign pests and diseases out of products bound for the United States, but it is too late to close the barn door on the bulb fly, which has been making a home in the United States for the past 140 years.