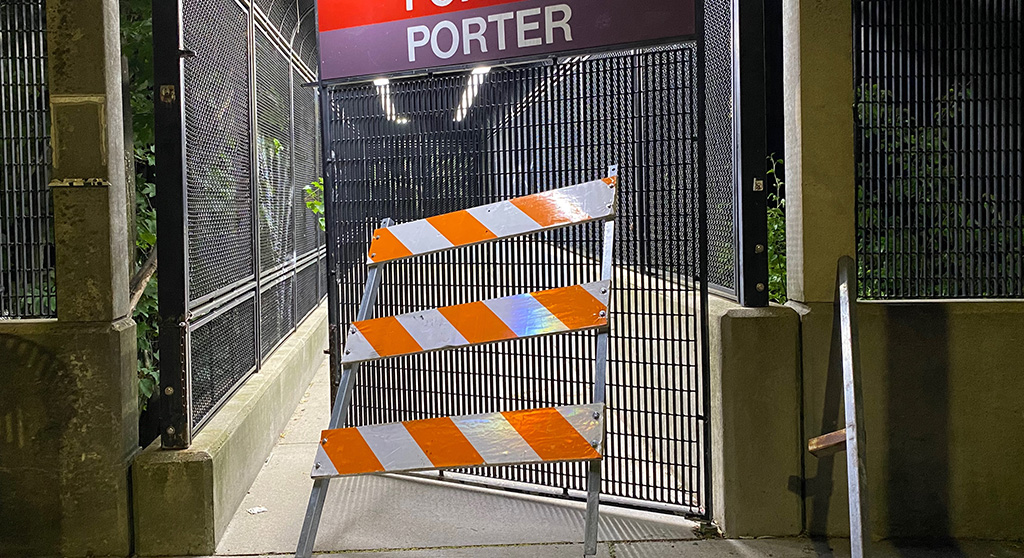 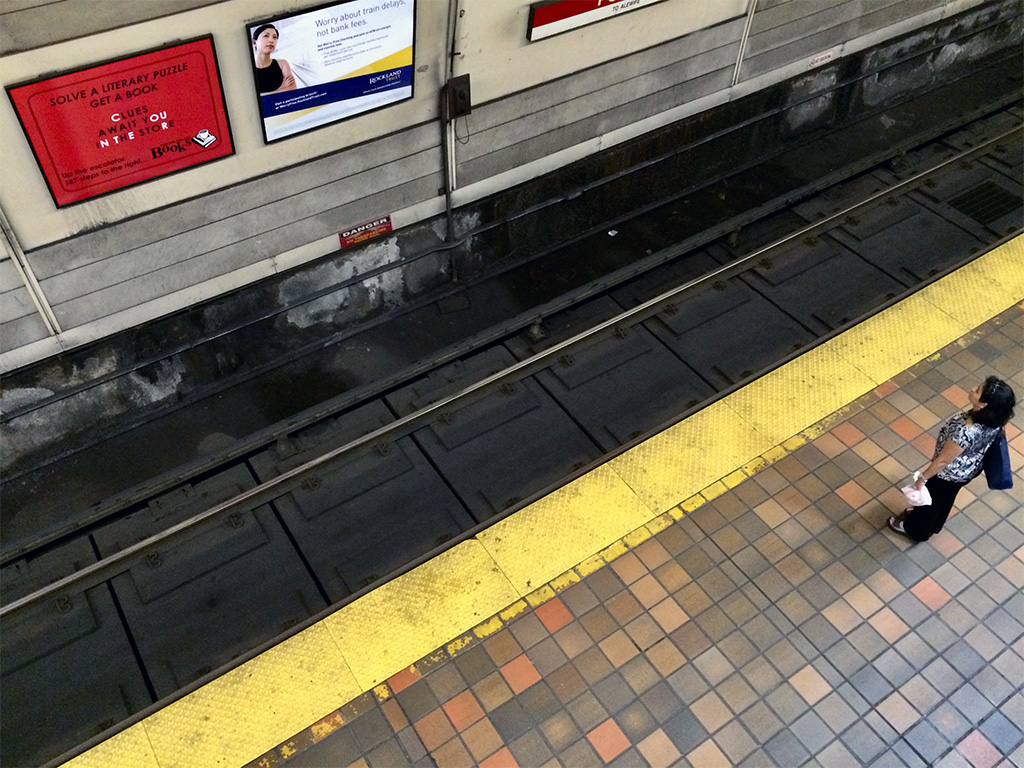 A passenger waits at for a train at the Porter Square T station. (Photo: Marc Levy)

Safety concerns from federal inspectors caused the MBTA to announce on Friday that weekday subway service on the red, orange and blue lines would be cut dramatically, and run on a weekend schedule.

But the MBTA story is worse than that.

Forty years ago, when I worked for the state, I asked an MBTA planner-manager a number of questions about erratic service on the green line and I got no answers. Finally he broke out in a mixture of anger and frustration: “MBTA management has given up on the green line because they can’t understand it.”

The news that some shifts for dispatchers are 20 hours long helps tell us why transit service is so erratic, with train and bus bunching followed by long delays. On some Cambridge routes where bus spacing is supposed to be 10 minutes in the peak hours, actual waiting delays can vary from zero (bunched buses) to 20 minutes. I have witnessed a bunching of four Route 77 buses at Porter Square, implying the next two buses will have average waiting delays of about 30 minutes each. How can anyone plan a trip when the average waiting time for the next bus arrival could be somewhere between zero and 30 minutes?

Nowhere do we see evidence of staffing levels and quality of service provided today or needed in the future. How many capable dispatchers do we need to give quality bus and train service? Unfortunately, the MBTA has no standards or measurements of bunching, and actually has imposed instructions on staff not to use that “b-word.” It makes no sense to reduce shift maximums down to eight to 12 hours from reported levels of 20 hours unless all buses and trains are released at the beginning of their trips with even spacing. Transit service has a built-in instability: If bus and train spacing is uneven at any time, the vehicles with the longest spacing in front will tend to fall behind, and bunching delays get worse and worse.

My observations of red line data is that when dispatching is late, potential bunching can be created before the trip even starts. Some red line operators are able to catch up and make bunching less severe (or hold the line so that bunching does not get worse); the remainder of the operators – about half – do not have this ability, and their trains simply slip further and further behind. There is no evidence that the MBTA monitors headways and identifies situations where bunching is starting and takes remedial action.

How about general red line performance compared with historical peaks? During World War II and for a few years thereafter, trains were entering Harvard Station every 90 seconds, or a minute and a half. If you check the MBTA website for scheduled headways, we have three numbers to select from for the red line: 4.5 minutes, 5.5 minutes and 11 minutes. Which one, if any are we supposed to believe?

The MBTA expects a massive order for new red line cars to reduce new headways to three minutes, which is what it was back in 1987, thirty-five years ago, before platforms were lengthened along the red line headways on the fixed-size fleet with them. Even at three-minute headways, train spacing is still twice what it was in World War II.

Another measurement recorded by state officials is a count of train passengers at the peak load point. This means counting the train riders on an inbound train entering Kendall Station in the peak hour. The last count was several years ago: 8,500 riders an hour. We do not have an up-to-date count during the pandemic, but overall rapid transit ridership is down about half. What comparison exists for an efficiently run transit system? A common figure given, probably for New York subways at peak efficiency, is 40,000 riders per hour on a single track. Why is the MBTA red line count so low? What are the causes of this inefficiency? Our work is just beginning.

The MBTA refuses to compare itself with any transit system – historically, nationally or internationally. No U.S. transit system is doing very well, with New York and Washington metros systems slipping into crises. The best performance worldwide is Moscow, with scheduled headways of 75 seconds between trains. The next best performer is the IRT subway in New York, which inaugurated service in 1904 with 78-second headways. Boston’s 90-second spacings during World War II were good, but not the best.

The MBTA’s troubles go back to the 1950s. Despite reorganizations and numerous studies, there has been no improvement in the bureaucratic “culture” of the agency, and transportation leadership comes primarily from the governor’s office – where we have not had a pro-transit leader since 1990. Bill Weld, Deval Patrick and Charlie Baker have all failed the challenge.

Please resist the temptation to throw more money at such an inefficiently run system; more money should be the last option, not the first. Start first with the bunching problems and the problem of the dispatchers. The result will be a reduction in delays and an increase in ridership. Progress may be slow at first, but we should keep working toward improvement.

My radical “solution” is to outsource bus and train monitoring and reporting to the MWRA. The Massachusetts Water Resources Authority is a well-run state authority that has used numerous methods to reduce metropolitan area water consumption to 200 million gallons a day from 300 million. Its staff understand performance, efficiency, quality personnel and management and has extensive construction and maintenance experience that can be used to assess the MBTA safety situation and create a “safety culture” – which was called for in a notable safety study done three years ago. Let the MWRA handle MBTA public relations as well.

Stephen Kaiser attended the Massachusetts Institute of Technology in mechanical engineering and was a traffic and transit engineer for the Commonwealth of Massachusetts for 15 years. His doctoral thesis was on the topic of automated transportation.