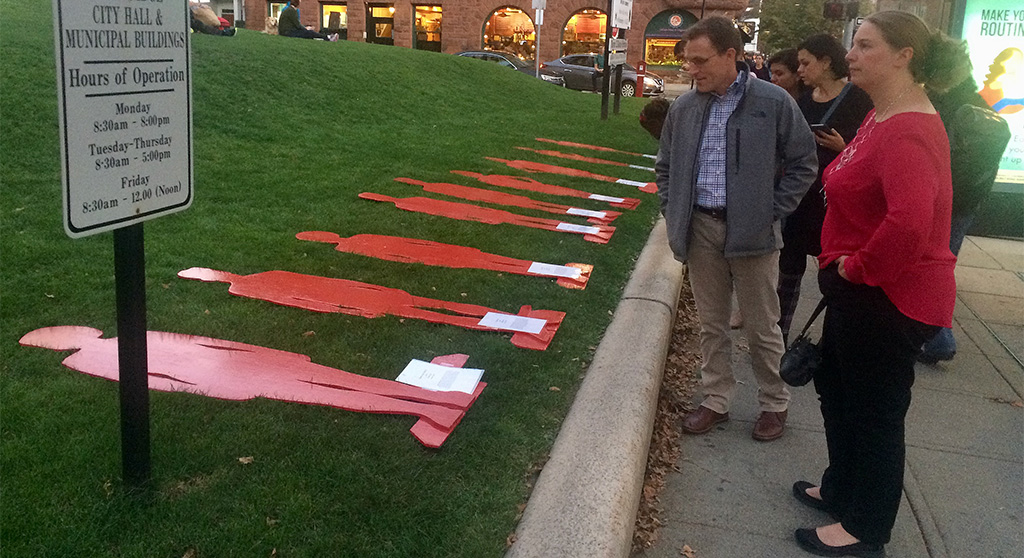 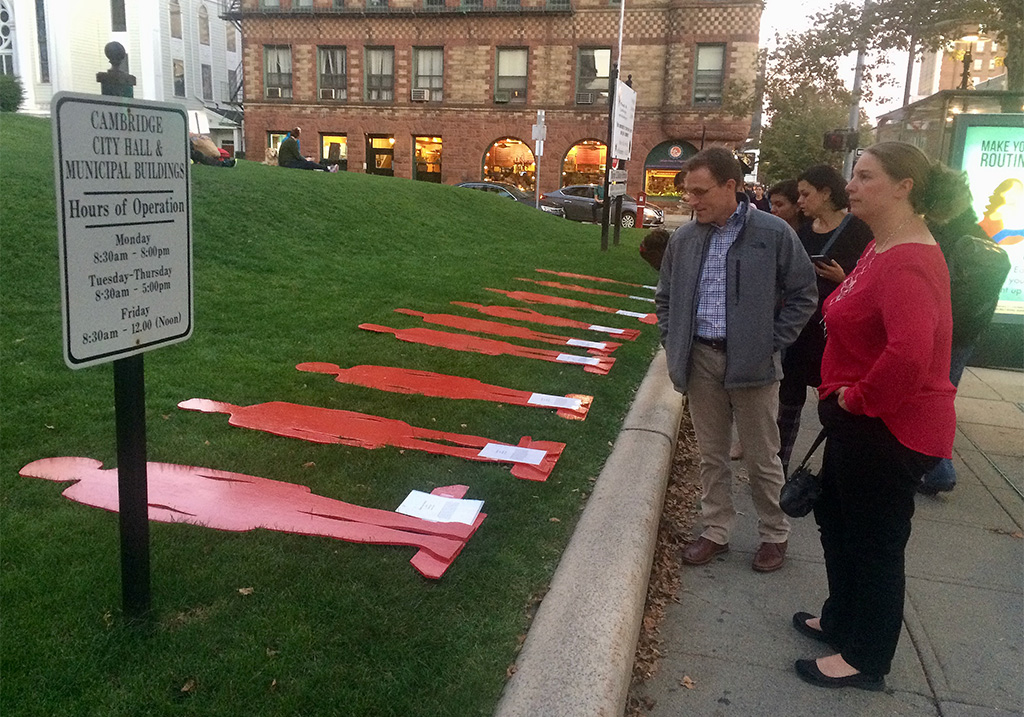 Art on City Hall lawn illustrates some of the impact of violence – in this case, domestic violence – at a Cambridge vigil Oct. 4, 2017. (Photo: Marc Levy)

A groundbreaking program at Cambridge Health Alliance that treated crime victims and others suffering from severe trauma will end Aug. 31 because there will be no staff members left to care for patients, the founders say. The demise of the 38-year-old Victims of Violence program is the latest fallout from staff resistance to a treatment philosophy introduced by new leaders of CHA’s psychiatry department, according to the critics.

In an unrelated announcement Tuesday, the Alliance said it will open 69 psychiatric beds for children and teenagers at its Somerville campus June 28, more than doubling its current 27 beds for those age groups. The expansion had been planned to open a year ago, but a water main break that damaged the building forced a delay. CHA said the increased capacity would help meet increased need for psychiatric treatment statewide that has left patients stuck for extended periods in hospital emergency rooms.

As for the closing of the Victims of Violence program, its founders, psychiatrist Judith Herman and psychologist Mary Harvey, sent a letter May 17 to Carl Fulwiler, interim chief of CHA’s psychiatry department, saying that staff departures will leave the program “an empty shell” and that there will be no training program for the first time in 34 years. Over the past few years there has been an “exodus” of mental health clinicians because of “a new leadership that apparently prioritizes business considerations over quality care” and prevents staff from using “their professional judgment” to treat patients, the letter said.

People are leaving “rather than violate their own moral and ethical standards by offering what they regard to be inadequate patient care,” the letter said. Herman and Harvey are on the faculty at Harvard Medical School.

Two groups representing CHA mental health clinicians made similar assertions last year in a letter to the Alliance’s board of trustees, saying more than a third of mental health staff had left, resulting in long waits for treatment. Several patients have told Cambridge Day or posted on social media that they had lost a therapist, with one saying he could not find another willing to continue providing long-term therapy.

The Alliance’s chief of psychiatry at the time, Philip Wang, is now its chief science officer. Fulwiler fills the gap left by Wang’s promotion.

Herman said last fall that under Wang’s new treatment model, clinicians were being told they could see patients with severe trauma once a month or even as little as once every three months, “and that’s not going to cut it.” In an interview last week, she said she and others affiliated with the Victims of Violence program didn’t want CHA psychiatry department leaders “to pretend that you have this program that has an international reputation when you don’t.”

In response, CHA spokesman David Cecere paid tribute to the program’s contributions to “clinical care, advocacy, outreach and research for patients suffering from trauma” and said “trauma-informed care is central to the mental health treatment we provide at CHA.” But the Alliance must “adapt to changing patterns of health care delivery” to provide patients with “the best quality care,” he said.

Cecere said CHA still offers long-term therapy but is developing “evidence-based treatments that will increase access, provide effective short-term therapies and ultimately empower our patients to be more engaged in their care.” The aim is to “grow capacity for patients to learn to help themselves,” he said. The new treatment and training models are based on science, “best practices” and recommendations of “the leading professional and academic organizations,” he said.

In response to the claim that the changes are based on science, Herman said many clinical studies of psychiatric treatment exclude patients with severe trauma such as the people whom Victims of Violence helps.

Former trainees in the program and agencies that deal with rape and domestic violence victims have reacted with sadness, support and shock in email messages provided by program supporters. “Thank you, thank you, thank you. I am so dismayed it is ending this way,” said one message from a clinician at Transition House, the Cambridge domestic violence shelter. Others said the program’s contributions would live on in the work of its trainees. “Please know that your seeds are yielding meaningful fruit and will continue to do so,” wrote one former resident psychiatrist in the program.

Victims of Violence began in 1984 when the City Council gave a small grant for a program to help crime victims. Responding to growing concerns about the extent and impact of rape and sexual and domestic abuse of girls and women, Herman and Harvey founded the program.

The Victims of Violence program originated the diagnosis of complex trauma for people who had experienced repeated and prolonged trauma, and developed a method to treat the complex post-traumatic stress disorder that resulted. The method includes establishing a therapeutic relationship with a clinician. The letter to Fulwiler said complex PTSD “afflicts the majority of our patient population.”

The program has won state and national awards. Complex PTSD is now recognized as a diagnosis by the World Health Organization, the letter said. About 200 clinicians have been trained by the Victims of Violence program,”many of whom have gone on to make their own contributions to the field,” the letter said.

Because of staff departures, few patients remain in the program, Herman and Cecere said. “Everybody is desperately trying to find resources for them,” Herman said. Cecere said CHA is working with Victims of Violence clinicians “to understand the needs” of their patients and assign them to other therapists at the Alliance.