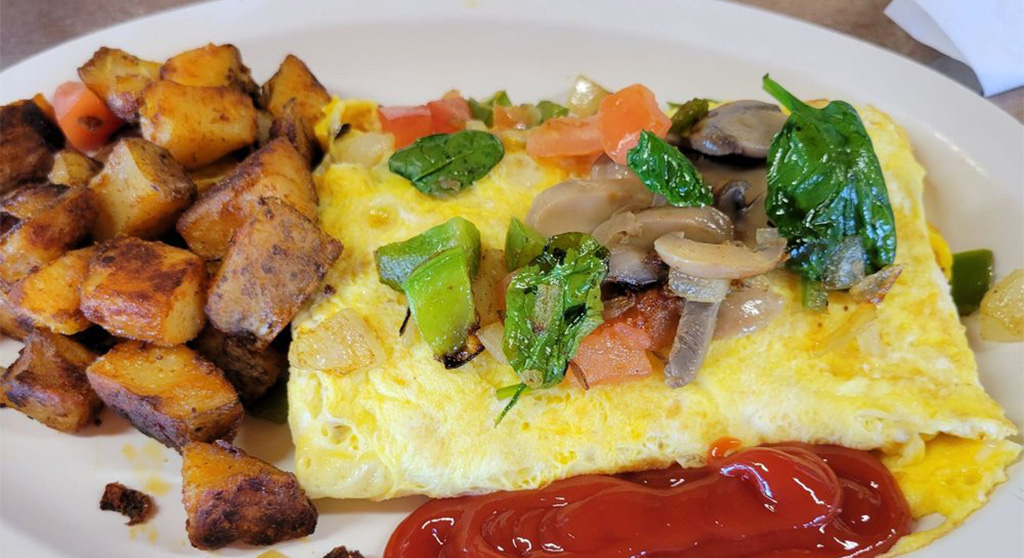 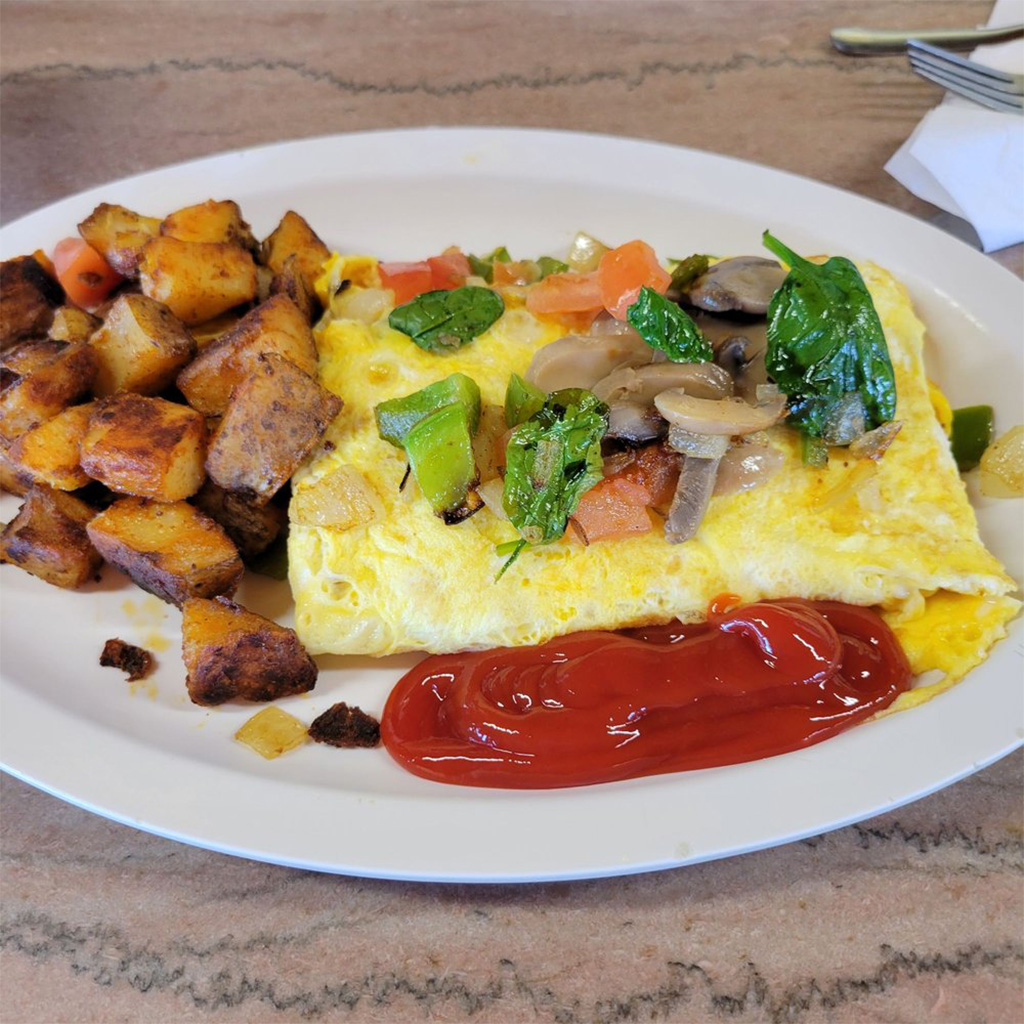 An omelet with signature toppings at Buddy’s Diner in Somerville. (Photo: Jason Y. via Flickr)

Buddy’s, that old-school curio on Washington Street on the other side of the McGrath and O’Brien highways as you head toward Sullivan Square, is an old truck stop turned classic diner with spinning bar stools, a long counter and folks who know how to do one thing and do it well: serve you breakfast. It’s hard to imagine a truck stop in uber-dense Somerville these days, but Buddy’s has been here since before the Great One. It has a new owner, but the interior still feels worthy of an Edward Hopper rendering, perhaps without some of the neon vibrancy.

I wonder how many people in Greater Boston these days have ever had a real truck stop experience. I’m not talking about the commercial rest stops along the ’Pike, but institutions that feel like they did a generation ago. As a kid growing up outside New Haven in rural Oxford, population 3,000, some of the best burgers and footlong hot dogs I ever had were at Fritz’s, a truck stop along Route 67. It was the one main road through the town, and the parking lot was a giant gravel pit teeming with semis. Later we moved to Newtown, where right off Route 84 you had the Blue Colony Diner, open 24 hours and something of a family eatery as well as a stop for weary truckers. It’s still soldiering on (so is Fritz’s); here, over in Watertown there’s the Deluxe Town Diner, run by the same family for more than 70 years. Places such as the Deluxe, Fritz’s, the Blue Colony and Buddy’s make me smile when thinking of their persistence, tradition and attention to quality, and their connection with customers. No offense, I dig the Rosebud over in Davis Square, but it was a whole other experience when it was primarily a no-frills brunch stop; it’s now an upscale eatery, part of the portfolio of area eateries that include Posto and the Painted Burro. 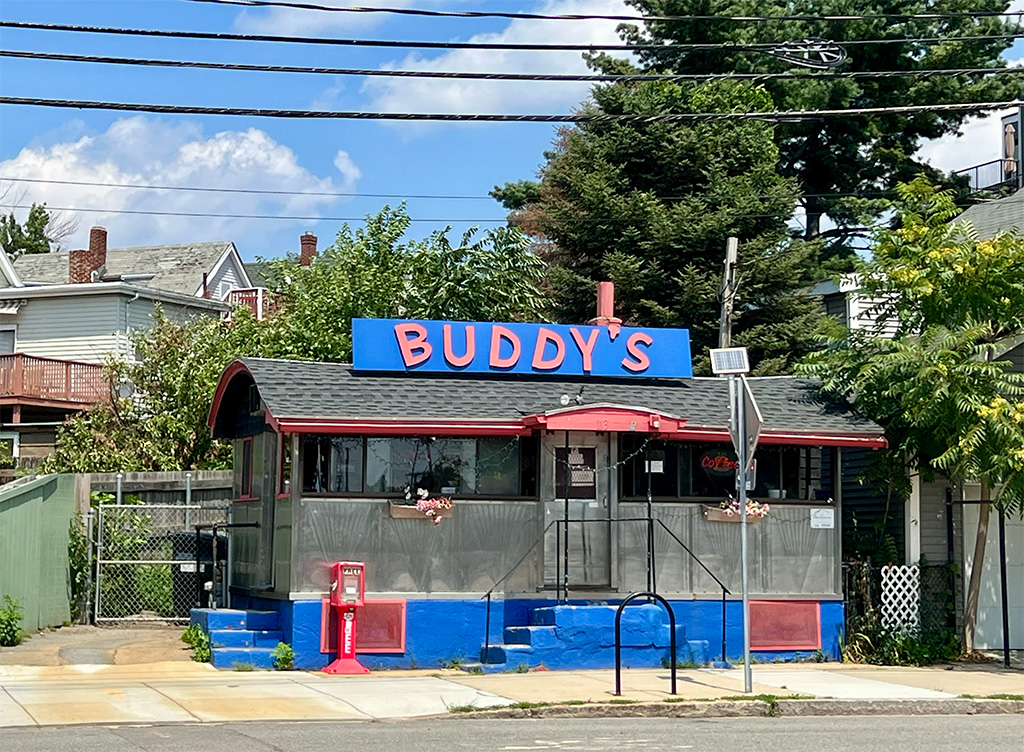 Back to Buddy’s: The menu’s handwritten and hanging up over the griddle. You sip your coffee and watch the griddle master whip, pour and fold your omelet on the steel hot-top just feet away. It’s much more intimate than the “open kitchen” concept you see in more upscale eateries these days. What you can get is eggs any way you want them, and basic burger and sandwich fare. I had the no-frills Buddy omelet made with mushrooms, tomatoes, bacon and cheese with a side of hash browns; it was a quick, meticulous process to make the flat, neatly folded omelet, which came out cooked evenly, moist and warm (overcooked eggs are the worst). In a pleasantly surprising move, not only was the omelet stuffed, but it came crowned with griddle-sautéed tomatoes and mushrooms. It’s a different preparation than most gastro or Irish pubs, which serve a brunch with omelets that are big and billowy; other spots that make really good griddle-flat omelets are Andy’s Diner and the Half Shell on Massachusetts Avenue, each on opposite sides of Porter Square.

On my last visit to Buddy’s, during the heat wave late last month, the AC had gone out, which made me wonder if that was why I was the only diner. (It was also close to the 2 p.m. closing time.) But windows open, it wasn’t so bad, and I’m happy to go back, AC or no AC. I hear the sausage and egg sandwich is an addictive must-try, and that when asked your bread choice with the omelet, the thing to do is get an English muffin buttered and toasted on the griddle. Talk about something sublime and heavenly, warm, buttery and soft – where most other muffins or toasts come up warmish, and the butter you put on top stays in a clump, this just makes that seem wrong. It’s another reason to go to Buddy’s, where the food comes off the griddle and right to you, no sitting, no waiting, fresh and hot.