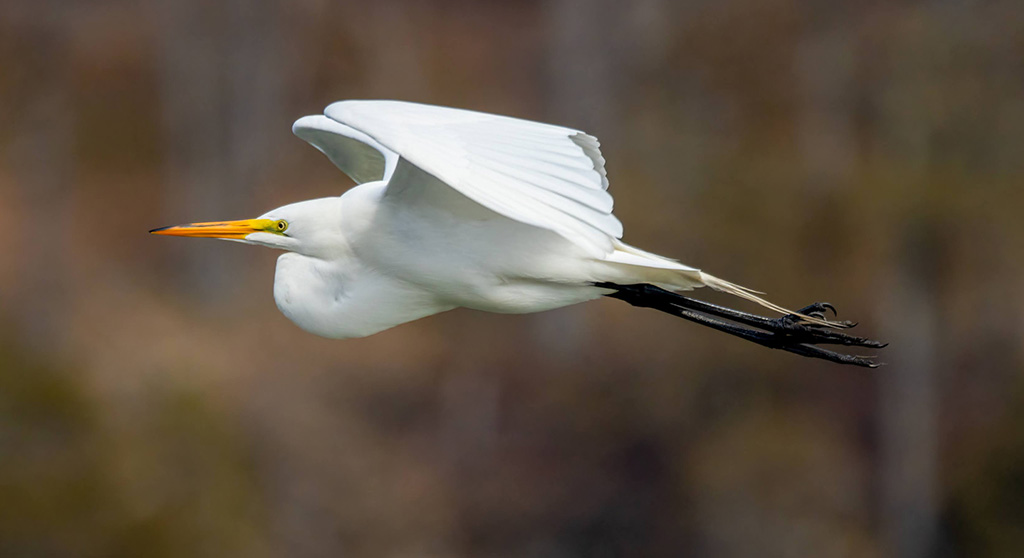 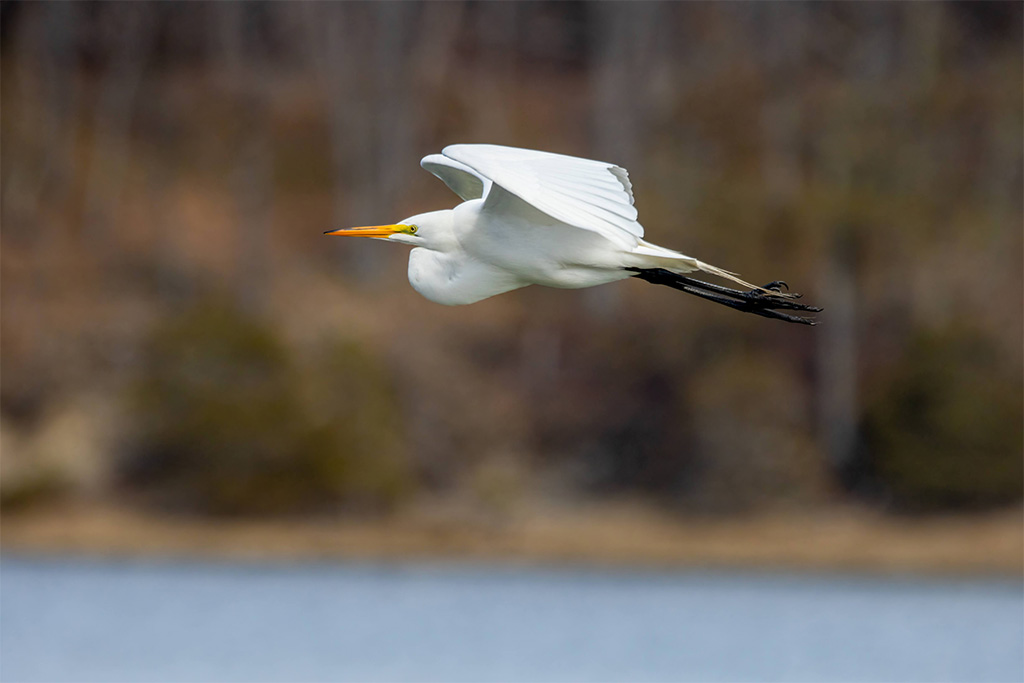 Although great egrets flap their wings slowly, they cruise at about 25 miles per hour. (Photo: Richard George)

Great egrets are majestic herons with long, beautiful white feathers – during the 1800s, hunters almost exterminated the birds because they so valued these feathers. During breeding season, male and female great egrets grow from their shoulders long plumes called aigrettes. Each aigrette contains about 35 strands of slim feathers. Milliners made widely popular hats that featured these aigrettes. Hunters killed and skinned hundreds of thousands of nesting adult egrets, leaving the baby chicks behind to starve or be eaten by predators. The bird painter John James Audubon (1785–1851) thought egrets were so plentiful in North America that no matter what people did, they would not be able to extinguish the species. 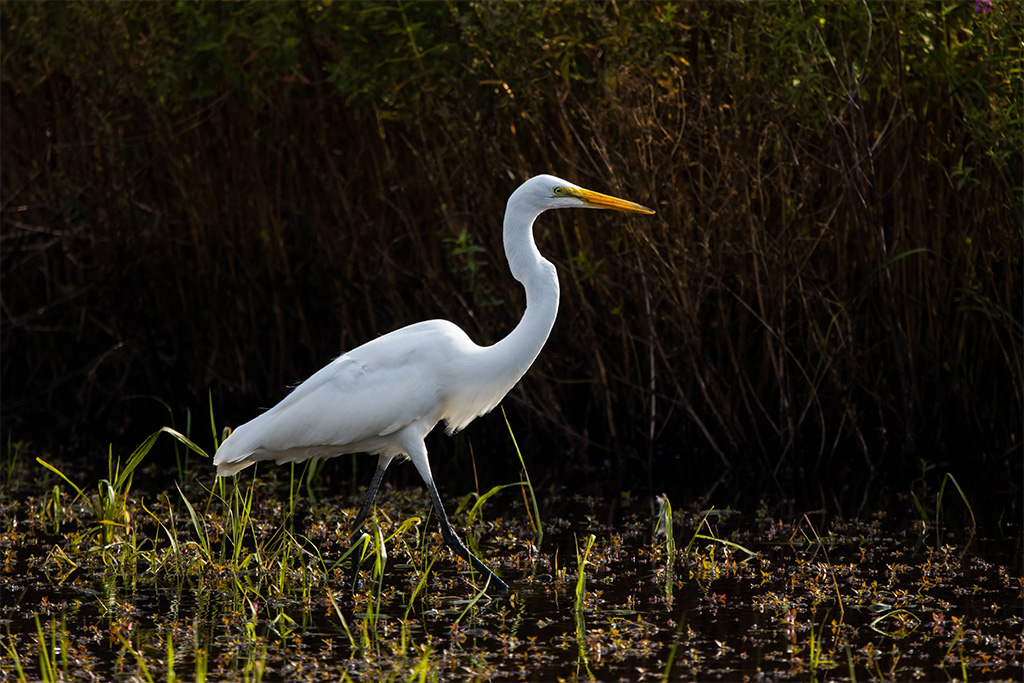 A great egret, sporting white feathers and black legs, searches for prey in North Cambridge. The neck can bend into an S-shape. (Photo: Richard George)

But by the late 1800s, great egrets were on the brink of extinction. Aigrettes (and egrets) became so scarce that the price for an ounce of aigrettes skyrocketed until it cost twice as much as an ounce of gold. (Each egret supplied about a quarter of an ounce of aigrettes.) Of course, this astronomical value just encouraged more hunting. By 1886, it is estimated, 5 million great egrets had been slaughtered for their feathers.

In February 1886, ornithologist Frank Chapman went bird watching on New York City streets: He spotted 542 hats adorned with 40 bird species, which made Manhattan one of the most diverse bird-watching locations in the world! Milliners adorned hat brims with feathers, wings, and even entire taxidermied bodies of about 50 species, including ostriches, peacocks, pheasants, eagles, swans, woodpeckers, blue jays, bluebirds, parrots and owls. 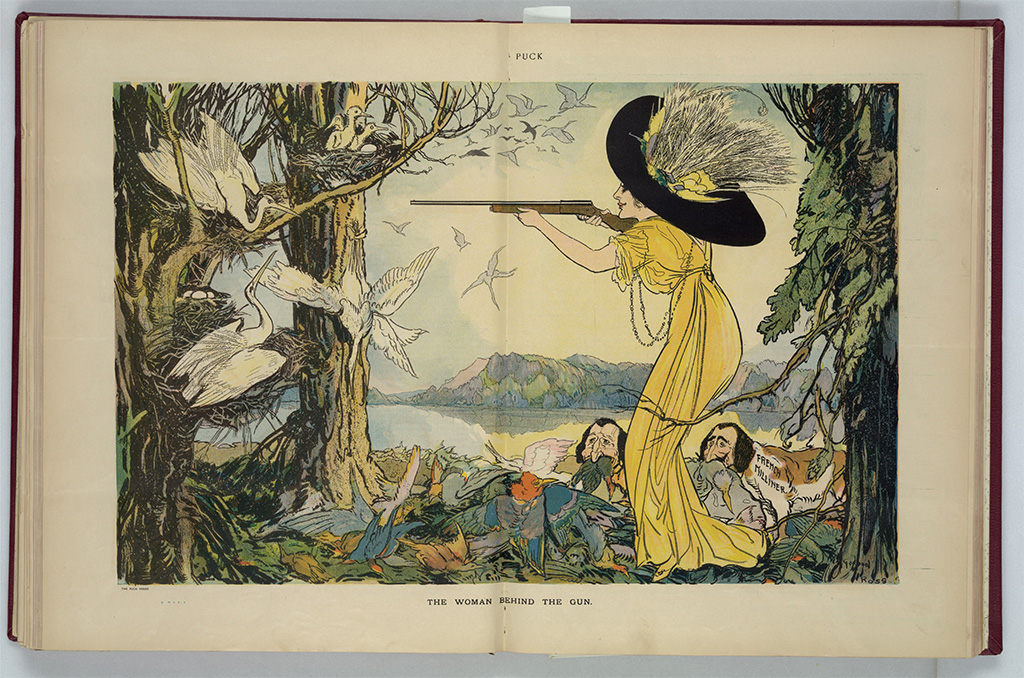 Harriet Hemenway, a wealthy Back Bay socialite, was outraged by the slaughter of so many magnificent birds. In 1896, she and her cousin Minna Hall, a wealthy Brookline socialite, contacted women they knew, arranging teas with them at which they urged the socialites to stop buying and wearing feathered hats. Nine hundred women joined the boycott. Later that year, Hemenway and Hall organized the Massachusetts Audubon Society. Thanks to these women’s advocacy, a 1913 law ended the plume trade, and in 1919, the Migratory Bird Act became law. 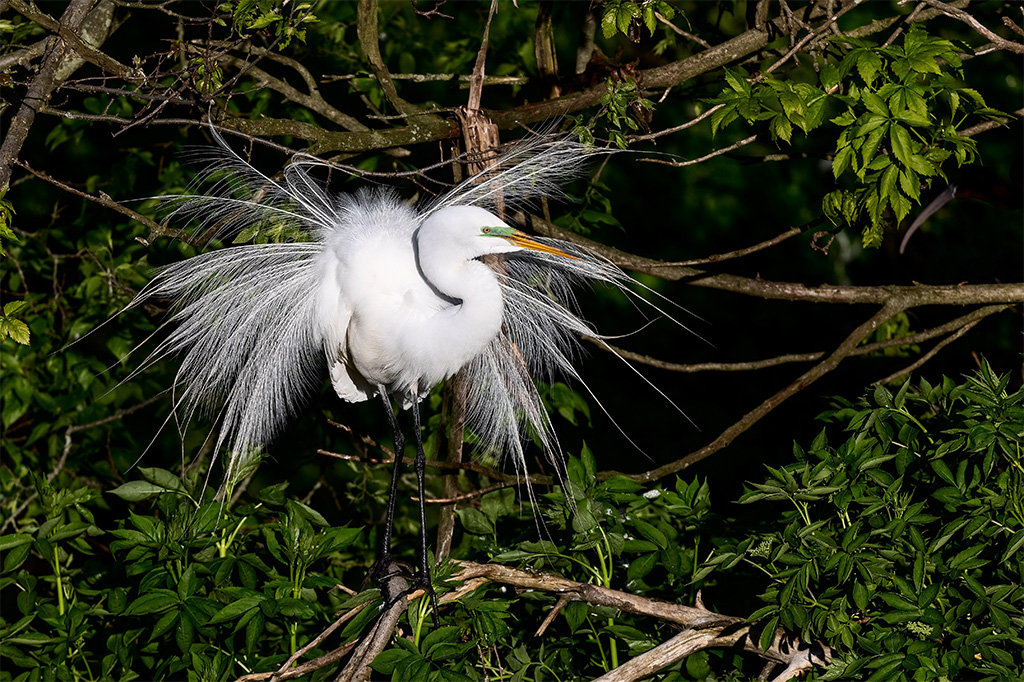 Since the 1900s, great egrets have slowly increased in numbers. Today you might see them foraging for fish, which they swallow whole, in shallow waters along the Mystic River or the marshes of the Alewife Reservation. Although they usually eat fish, they will also devour frogs, reptiles, crustaceans, insects or even voles. 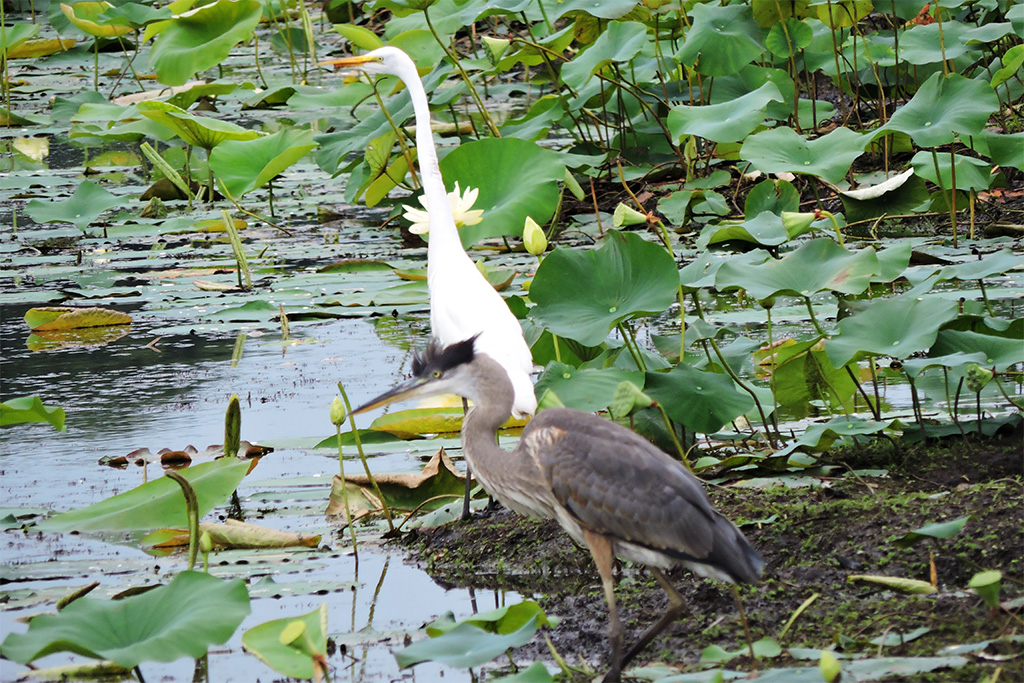 A great egret and a great blue heron hunt side by side. (Photo: Ann Schlesinger)

In the month of May, great egrets begin nesting in colonies in Massachusetts. The male builds a platform, often high in a tree, near wetlands with reeds. He courts the female with fancy displays of his elegant aigrettes. If the female returns the displays, the two complete the nest that the male has started. The female lays eggs, which the two adults incubate, and after the eggs have hatched in slightly more than three weeks, the two work together to feed the chicks. The eggs do not all hatch at the same time, so each nest contains chicks of different ages and sizes. Depending on the amount of food available, the littlest chick may starve or be killed by siblings. The chicks fledge in about six weeks. 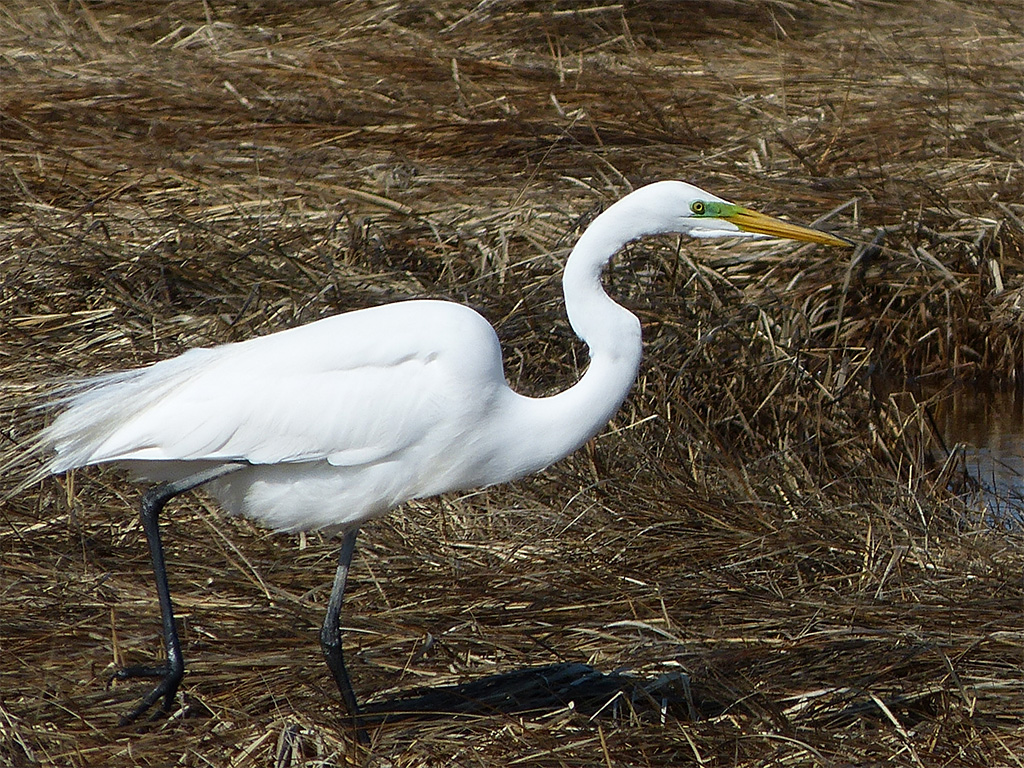 During breeding season, great egrets develop a patch of green between the beak and the eye. (Photo: Brian Rusnica)

After the breeding season ends, the birds disperse, which is why we sometimes see them in our area in late summer. At night they roost in communal groups with other herons. When the weather turns colder, the birds migrate south and spend the winter anywhere from North Carolina to the Bahamas.

Great egrets, like many bird species, were threatened by human interaction and disregard for the environment. This cavalier attitude was common in its day, as Carl Sagan wrote in “Shadows of Forgotten Ancestors”:

[Charles] Darwin had been lured to South America by the prospect of discovering new birds and new beetles, but he couldn’t help noticing the carnage the Europeans were inflicting. Colonial arrogance, the institution of slavery, the extirpation of countless species for the enrichment and entertainment of the invaders, the first depredations of the tropical rain forest … troubled Darwin at a time when Europe was confident that colonialism was an unalloyed benefit for the uncivilized, that the forests were inexhaustible, and that there would always be enough egret feathers for every millinery shop until the Day of Judgment.

There’s a lesson for us today in Sagan’s description of the past, but I will leave you to make the connections on your own. 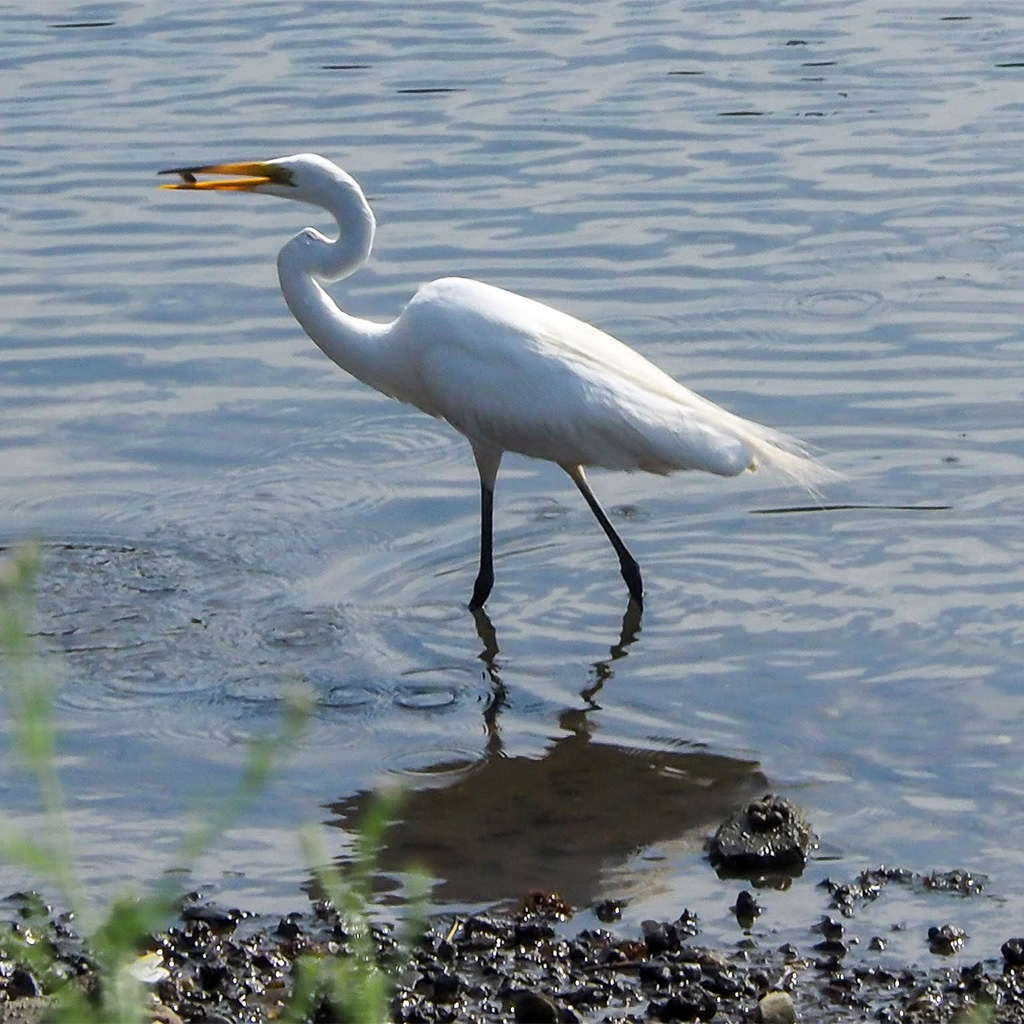