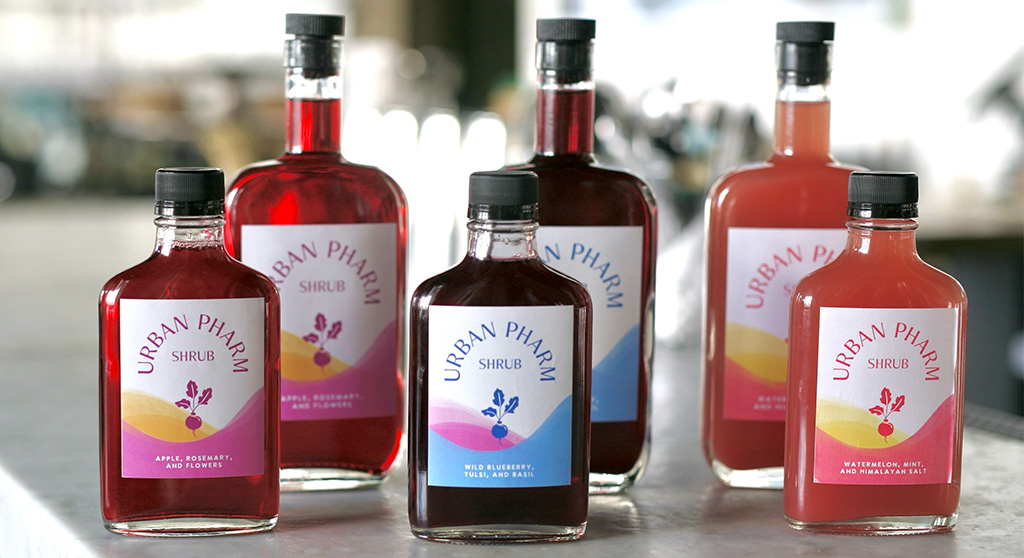 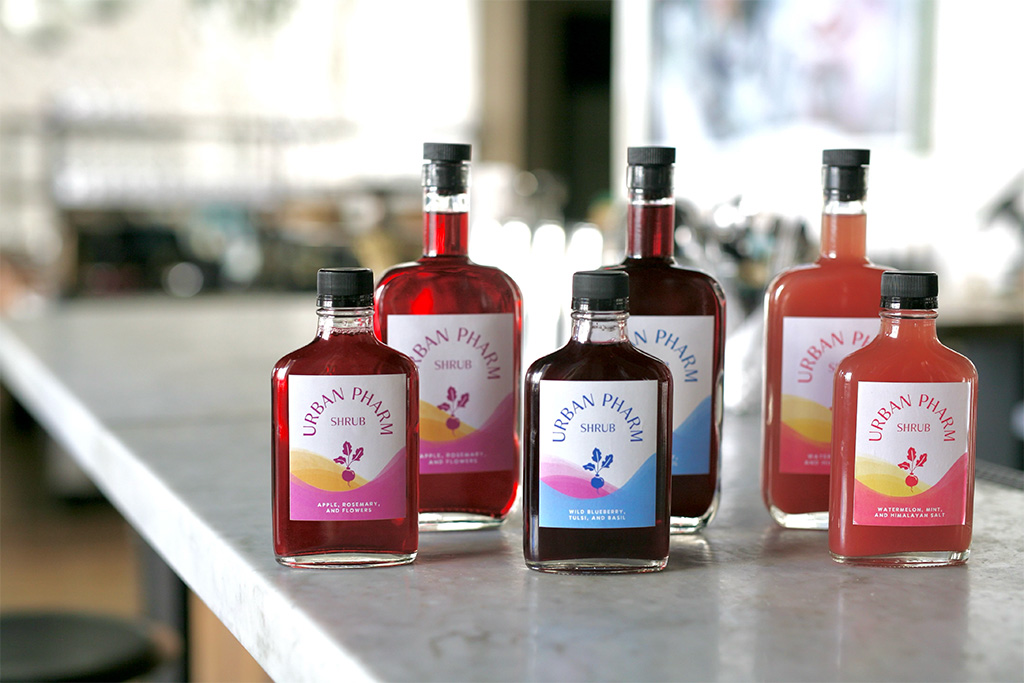 Jill Forney doesn’t consider herself a wizard in the kitchen. In fact, she said her West Cambridge home counter looks more like a science lab with a permanent experiment going on: Various colored liquids over here, small pieces of herbs and other greenery shredded, torn and picked at over there.

Yet in talking about Urban Pharm, the “shrub” company she started this year with Cambridgeport pal Anne Bunn, and their product development process in particular, she called it “kitchen witching.”

At Urban Pharm, the shrubs they sell are not run-of-the-mill bushes that require pruning. Their goods are apple vinegar-based elixirs of sorts, modeled after those first developed in 15th century England that took advantage of vinegar’s reputation for good health, but mixed with alcohol to make “medicinal cordials.” Americans adopted the British recipe generations later (in the 1800s) as a way to preserve berries and other fruits off-season. Apple cider vinegar reemerged in more modern times as a scientifically validated source of antioxidants and antimicrobials.

The company’s Apple, Rosemary, and Flowers Shrub, for instance, has apple cider vinegar that “supports digestion” and apples with attributes that “promote immunity and reduce inflammation,” raw honey that “improves blood sugar regulation,” rosemary rich in antioxidants and anti-inflammatory compounds, hibiscus with “heaps of vitamin C” and rose petals whose antioxidants “reduce the risk of heart disease, diabetes, obesity and cognitive decline.” 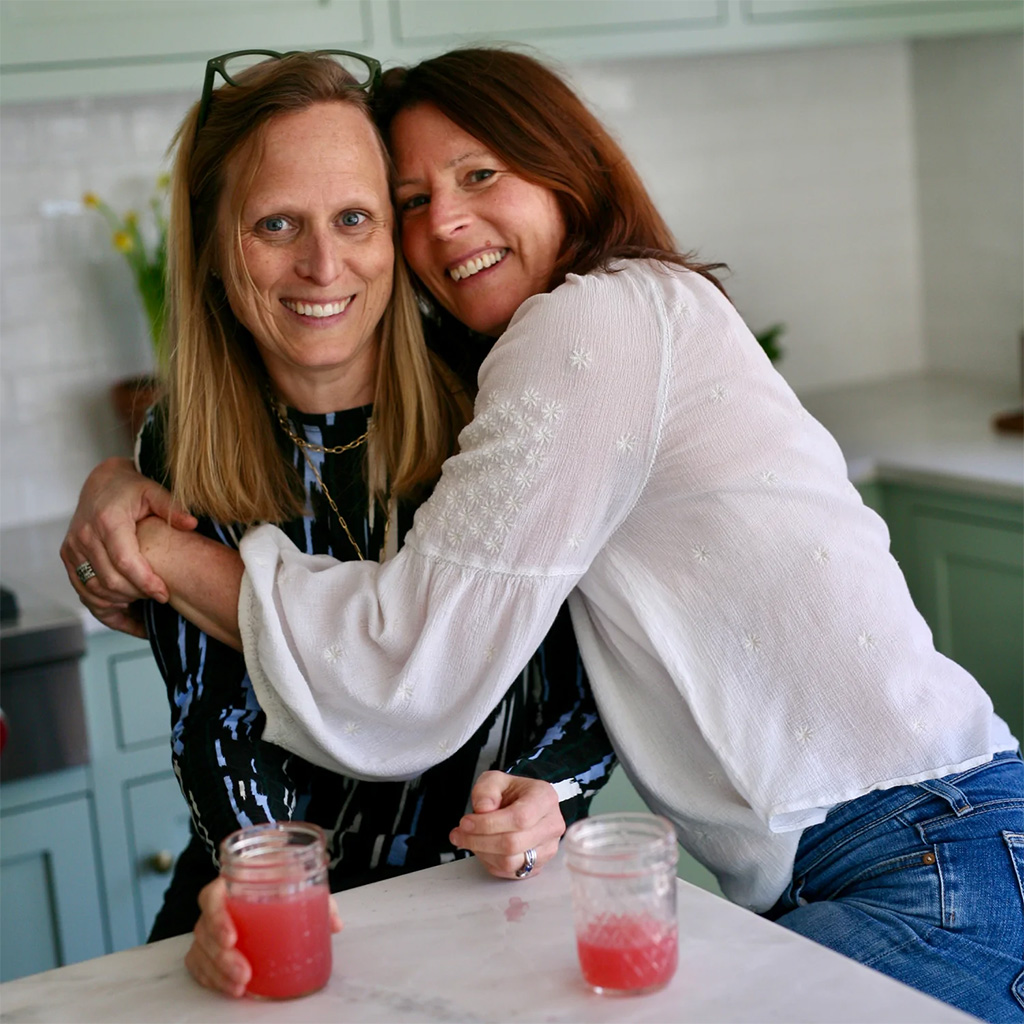 Forney’s and Bunn’s version took root during Covid, when they often found themselves gathered with friends in backyards around Cambridge enjoying food, fellowship and, in the winter months, warming fires. Despite relishing what felt like overdue human contact, “we were still missing kind of this constant human touch and sharing with our friends. So Jill and I in January of 2021 started delivering little care packages once a week to friends,” Bunn said.

The packages were homegrown: small, upcycled wooden crates filled with a drinking vinegar, homemade broth, a healthy sweet treat and a savory treat, all concocted in the two women’s kitchens with organic, often locally sourced ingredients. “We also wrote a letter saying what we were listening to and what we were reading and what the good-for-you ingredients were in all of the things that we delivered,” Forney said.

They were surprised by the response. “It was obvious that we weren’t the only ones who were longing for this kind of being taken care of, this intimacy and friendship component,” Forney said. Maybe most surprising was how many of the comments were directed to the personal touches the pair brought to their creations. Forney described the reaction: “Not only do these treats show up, but it’s like we get Anne and Jill delivered to us.”

After two delivery cycles – the second to test on a larger group of potential customers for interest as well as the pair’s own appetite for more work – they were ready to take a step forward to trying to make a go with shrubs alone.

While the partners never formally laid down a set of stated values, Forney and Bunn said they were unspokenly committed to “putting forward what we feel good about putting forward” – that meant being patient especially with the many supply chain issues created by Covid. “The flash bottles [we wanted] were completely impractical. We couldn’t find them. We could find big ones, but not small ones; we could find small ones, not big ones. The same thing was true in the development of our labels, and the sourcing of our ingredients. [But being picky] was more than intentional. It really matters to us,” Forney said.

Their ongoing product development process is similarly organic. Industrially certified kitchen space at Foundation Kitchen in Lawrence became an extension of their kitchen counters, where they continued to tinker with ingredients to conjure up formulations. “We mixed ingredients together with an eye toward color, which we didn’t realize was important to us at the beginning, and [with an emphasis on] the unexpected, that might make you think like, huh, that’s interesting. And, of course, with an eye toward ingredients that were good for you,” Forney said.

They chose ingredients from local producers wherever possible (“ideally you actually can interact with the people who are making the stuff”): honey from Rick and Sue Reault at The Colony in Carlisle and apple cider vinegar from Bob Sewall and Mia Mantello at Sewall Orchard, Maine’s oldest operating apple orchard, in Lincolnville, among others.

The brand name they chose, Urban Pharm, was just shorthand for their philosophy: Food can be medicine; what’s in your cupboard can make you well; and whatever can be grown in city-style backyards such as Bunn’s and Forney’s – and yours – can be the foundation for it all. “If you plant a bunch of stuff in your yard. Some of it grows and some of it doesn’t, but chances are what’s left is something good you can build on,” one of the partners said.

Urban Pharm opened its virtual doors at the beginning of May with online sales primarily to friends and family, followed by a few Cambridge-area pop-up events. Today, the shrubs can be found online and at selected local farmers’ markets including at The Charles Hotel (rotating on Fridays or Sundays through November) and Copley Square (most Tuesdays through November). Instagram and a newsletter provides regular updates.

Kitchen witchery aside, neither Forney nor Bunn claim to have a crystal ball about the future of the business. “We have many intentions,” Forney said. “But one is just for people to have fun with it, you know, to think like this is adding something healthy and good for me to my diet, but it also is really like fun and tastes delicious and the color is beautiful.”