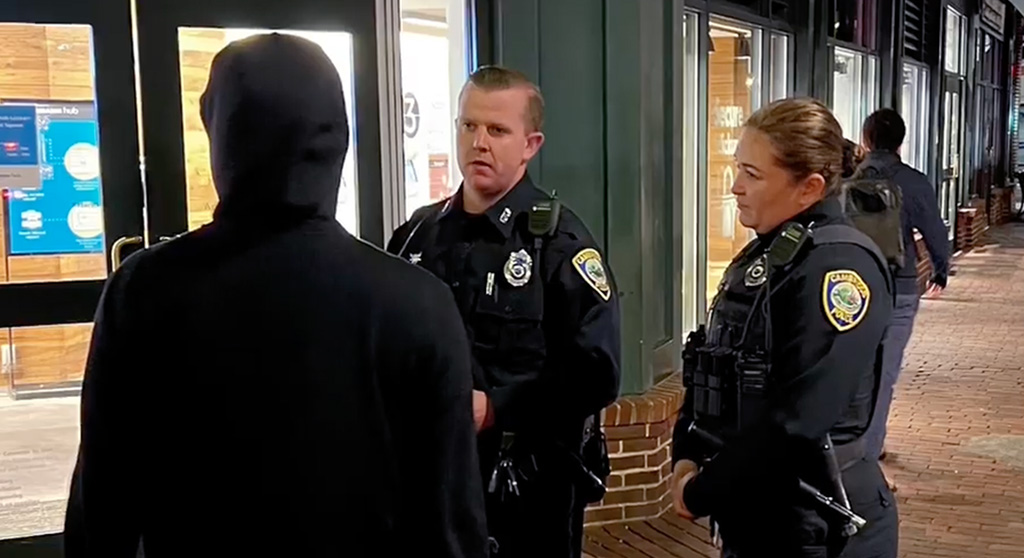 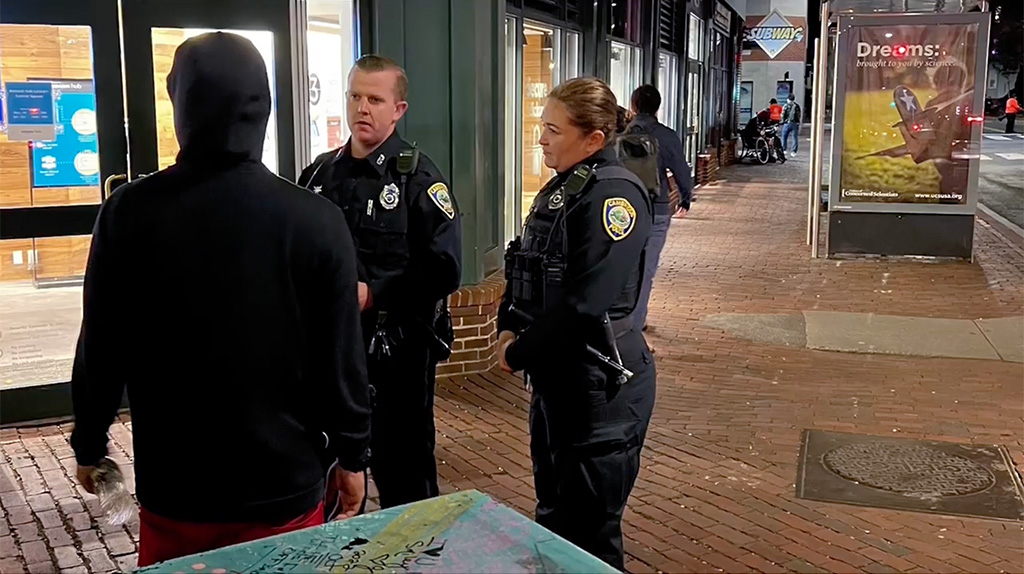 Officers patrol Central Square in a screen capture from a video released Monday by the Cambridge Police Department.

Police and city officials are stepping up efforts against crime and homelessness in Central Square since Starbucks delivered a hard-to-miss illustration on the extent of anxieties there: an announcement that the coffee shop chain was pulling out, serving for the last time Sunday at one the square’s most prominent corners.

Other business owners in the square have been looking to the city for help.

Though the square hasn’t “ever been cleaner,” said Josh Gerber, owner of 1369 Coffee House, “things feel worse” than before the Covid pandemic, part of that being the higher visibility of unhoused people since the clearing of the “Mass and Cass” area in Boston.

“The city needs to direct more resources toward the square,” Gerber said. 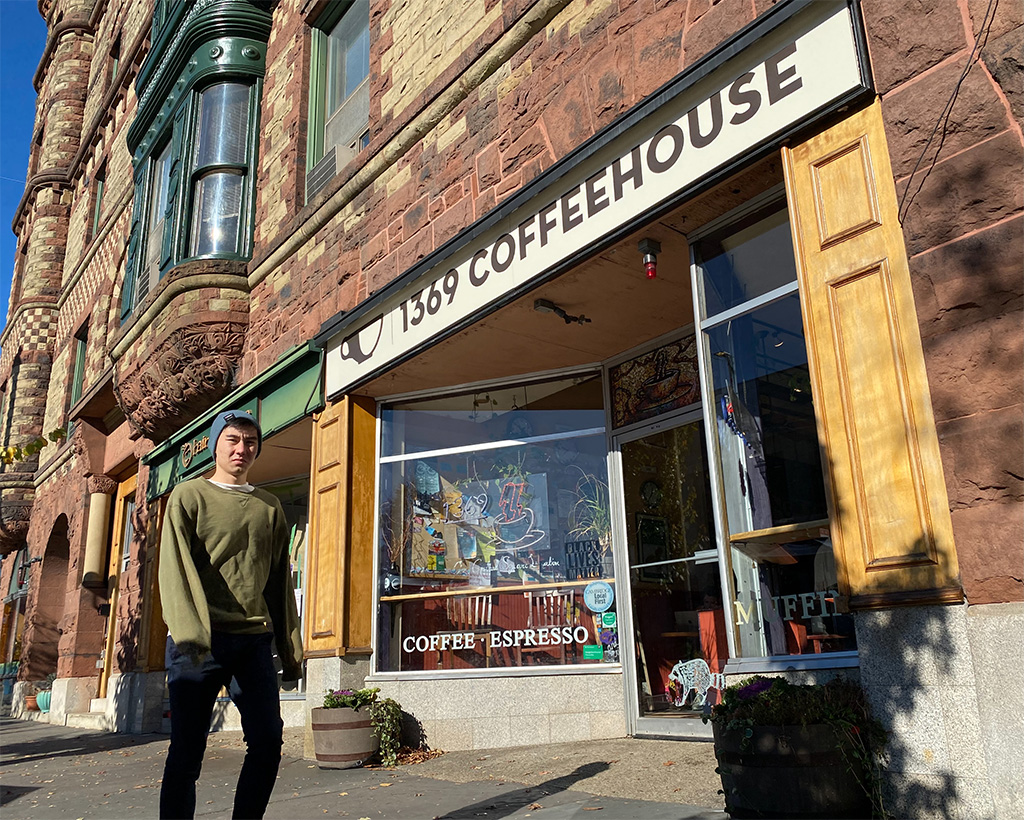 The 1369 Coffeehouse in Central Square, seen Wednesday. The square has never been cleaner, the owner says, but “things feel worse.” (Photo: Marc Levy)

That’s happening now: Cambridge police said Monday that they were “investing additional resources, time and energy into the increased safety and wellness of Central Square following a recent increase of reported and observed concerns.”

A public meeting about the city’s unhoused population and an uptick in substance use in Central Square is planned for 2 p.m. Nov. 29 at City Hall, held by the City Council’s Human Services Committee. 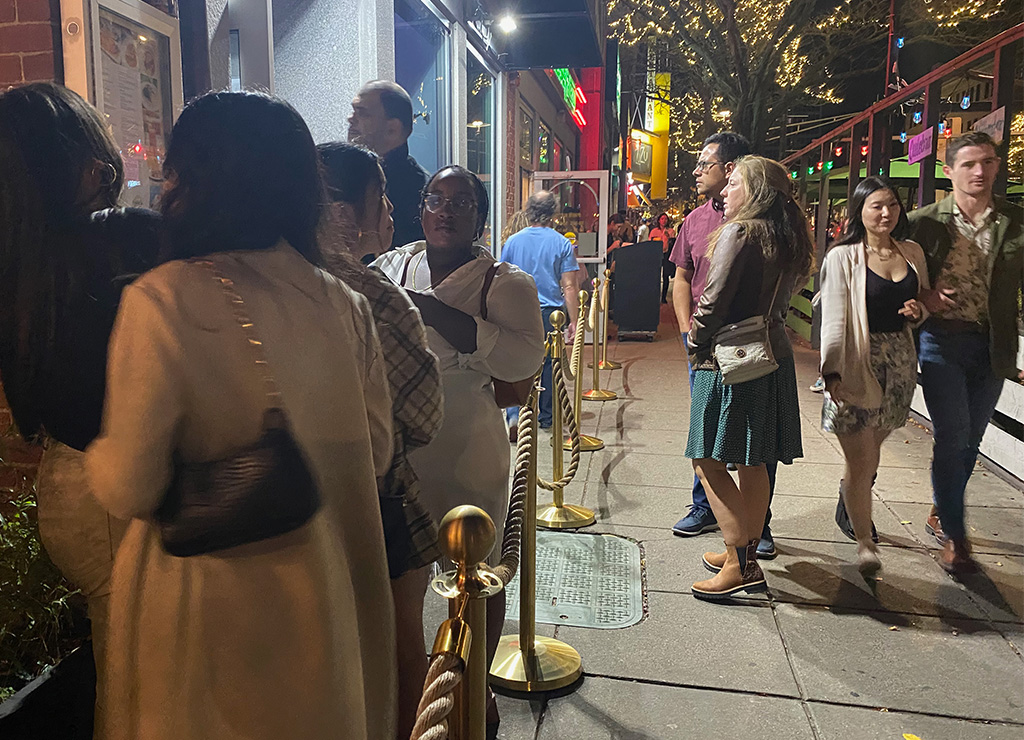 Nightlife in Central Square on Saturday, as people line up to get into La Fabrica, a restaurant and nightclub. (Photo: Marc Levy)

Another Central Square business owner expressing concerns is Patrick Barrett, developer of the 907 Main boutique hotel and a proposed revamp of the Middle East restaurant and nightclub complex. Barrett has expressed various concerns and claims that couldn’t be verified. “The police are demoralized, without any council support,” Barrett said in comments posted online. “There just seems to be an unwillingness to do anything. Since August, we’ve had multiple stabbings, two muggings and two shooting incidents on top of a ton of violent interactions that go unreported … We need leadership now more than ever.”

Barrett also said that this year the Central Square Business Improvement District, of which he is a board member, had so far picked up more than 21,000 syringes, increasing from 16,000 last year, and that crime is causing other businesses to leave – a Dunkin’ Donuts that closed at 616 Massachusetts Ave., and potentially the 7-Eleven minimart at 750 Massachusetts Ave.

No stabbings have been reported in Central Square since July; there have been two gunfire incidents in the area since the beginning of July, but only one shooting in October that resulted in non-fatal injuries, not the two cited by Barrett, police said. No cause was given by Dunkin’ upon closing, and the owner of the 7-Eleven hung up when asked to talk about crime in the area. A worker at the store this week was dismissive of Barrett’s claim.

“There’s more crime,” the worker said. “But we’re not closing.”

Although Barrett and fellow Central Square BID board member Michael Monestime said they welcomed the chance to talk about crime, both have declined to respond to multiple attempts by email and phone call to get them on the record. Barrett was first emailed Oct. 24, followed by calls that went unanswered, and the Business Improvement District offices were first contacted Oct. 27. Monestime said Oct. 31 that he would talk the next day, then didn’t pick up the phone or respond to messages. 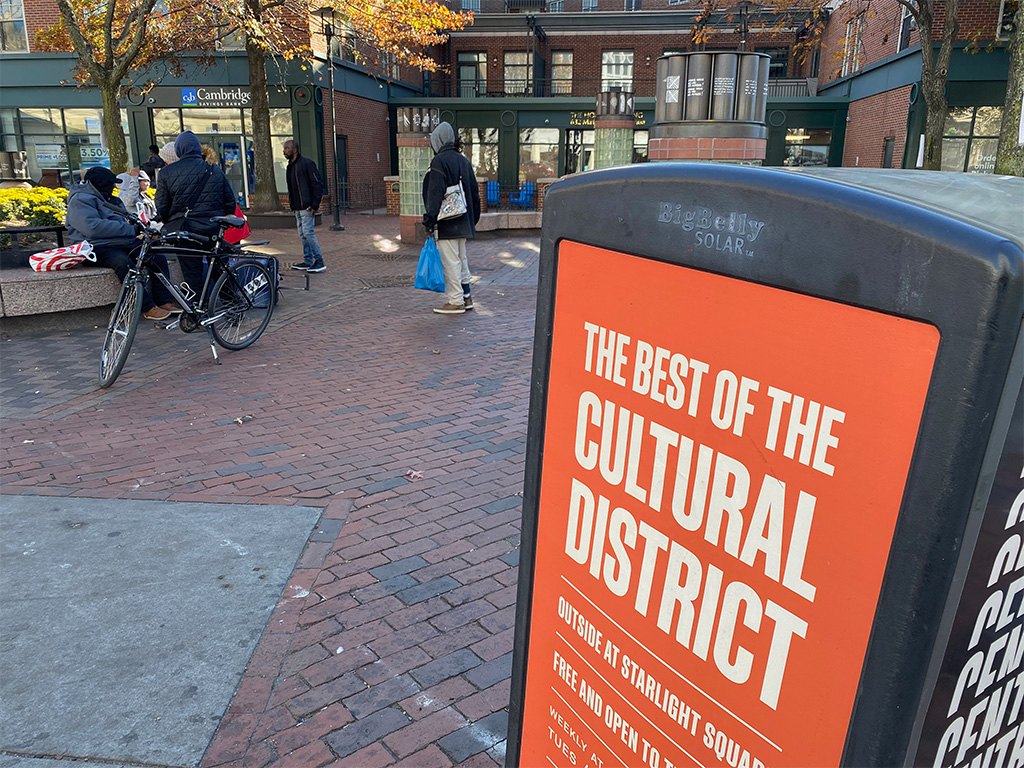 Certain types of crime have been concentrated in the Central Square area. Around 36 percent of all aggravated assaults happened in the area this year, and around 61 percent of street robberies – with the “predominant scenario” involving a few suspects taking phones and personal belongings from unhoused people, according to the November BridgeStat report released by police. Between 2020 and 2021, larcenies from persons, in which something is stolen without confrontation or awareness, increased by 29 percent, according to the CPD’s Annual Crime Report. Shoplifting increased 10 percent over the same period.

Police are working with the Central Square BID to “improve the overall health of the square,” such as by deploying additional containers where drug users can throw away needles safely, said Jeremy Warnick, director of communications and media relations for the department. 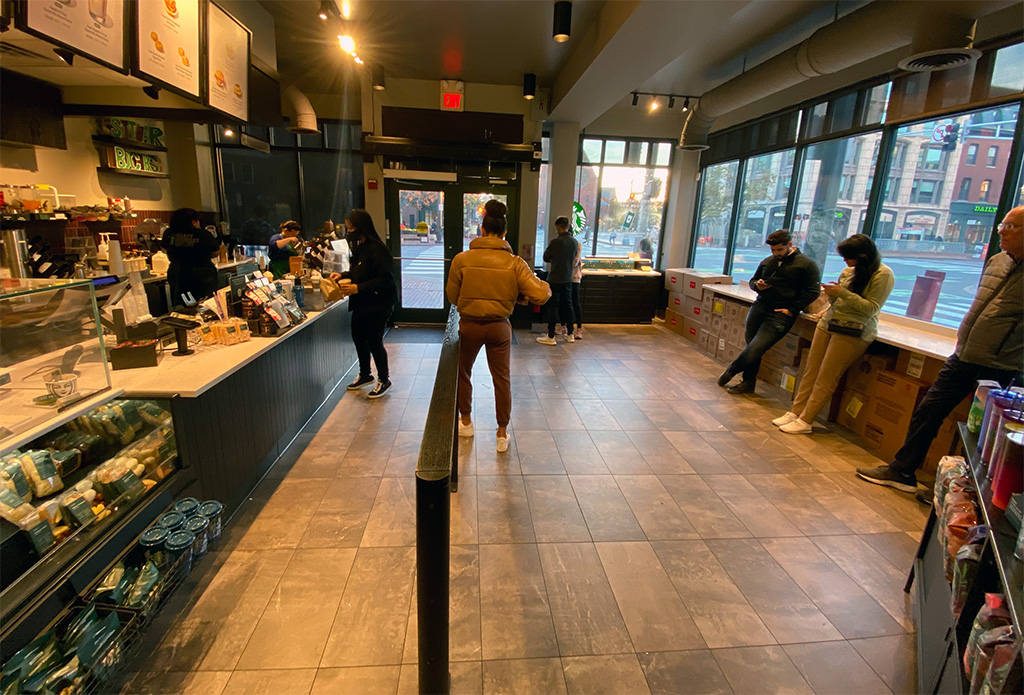 “We are a data-oriented police department. We direct patrols in high-activity areas seven days a week over the course of every shift. Additionally, we conduct high-impact patrols during the day and night shifts seven days a week in areas that have seen an increase in quality-of-life and disorder complaints,” Warnick said in an email.

There’s no evidence crime was just a pretext used by Starbucks to close a 25-year-old store where employees were unionizing. Workers at the store said they were unaware of any such effort; at an Oct. 30 union rally at Cambridge City Hall, the only Starbucks worker present was Liam Easton-Calabria, a labor organizer from a location in Brookline’s Coolidge Corner, and he said he too was unaware of organizing in Central Square. “There are store closings all over the country” due to claims of rising crime, Easton-Calabria said, though “I don’t think there are numbers to back that up.”

Attention on the unhoused 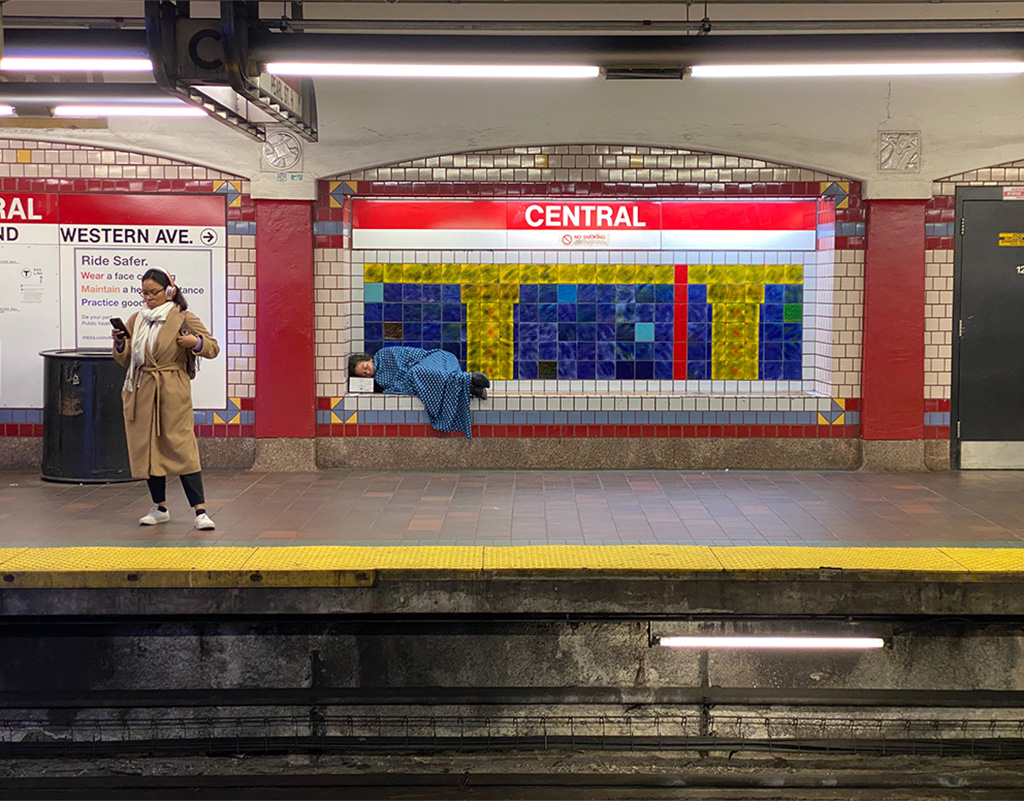 The attention of business owners, city officials and police falls largely on the unhoused population.

Police assignments are intended to “develop and document intelligence” so people in need of services can get follow-up from CPD’s Family and Social Justice Section, which includes a clinical support unit overseen by a psychologist and employing licensed independent social workers. “Officers will take enforcement action to address crime and quality-of-life problems, where appropriate,” Warnick said.

City councillor Quinton Zondervan, the chair of the council’s Public Safety Committee, thinks the solution to making Central Square safer is providing better services for its homeless. “A lot of these crimes” are committed by unhoused people on other unhoused people, he said.

He attributed the increase in crime in the square to the pandemic and high inflation. “The more people become unhoused and unemployed, the crime rate goes up,” Zondervan said. “It’s just that simple.”

“The notion that somehow putting more police officers on the street is going to solve this problem is absurd,” Zondervan said.

With the loss of 40 beds at Central Square’s Salvation Army shelter in the spring, the city is losing ground on space for the unhoused. Zondervan said he is working closely with the city manager on the issue. There is plenty of money and space available, he said, but “it’s a very challenging environment.”

Gerber, at 1369 Coffee House, said he has a very positive view of the square regardless of any of its issues.

“Central Square has always been a neighborhood that has served a really wide and diverse set of people. And that has included folks who are doing business in Central Square, it’s included the people who live in the really nice houses and condos and places in Cambridgeport and Mid-Cambridge – and it’s also included a lot of unhoused people who utilize the services that are here,” Gerber said. “And there are a lot of services.”