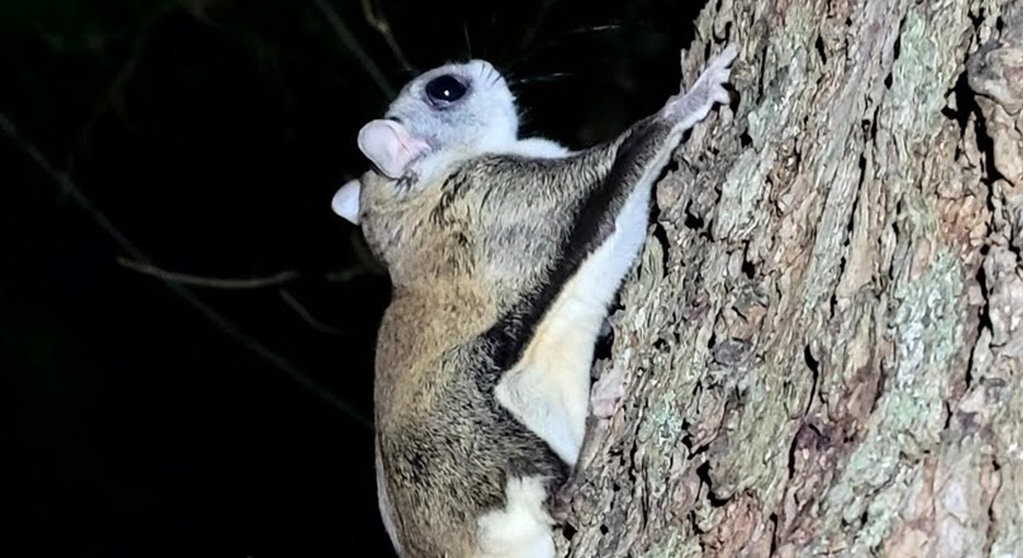 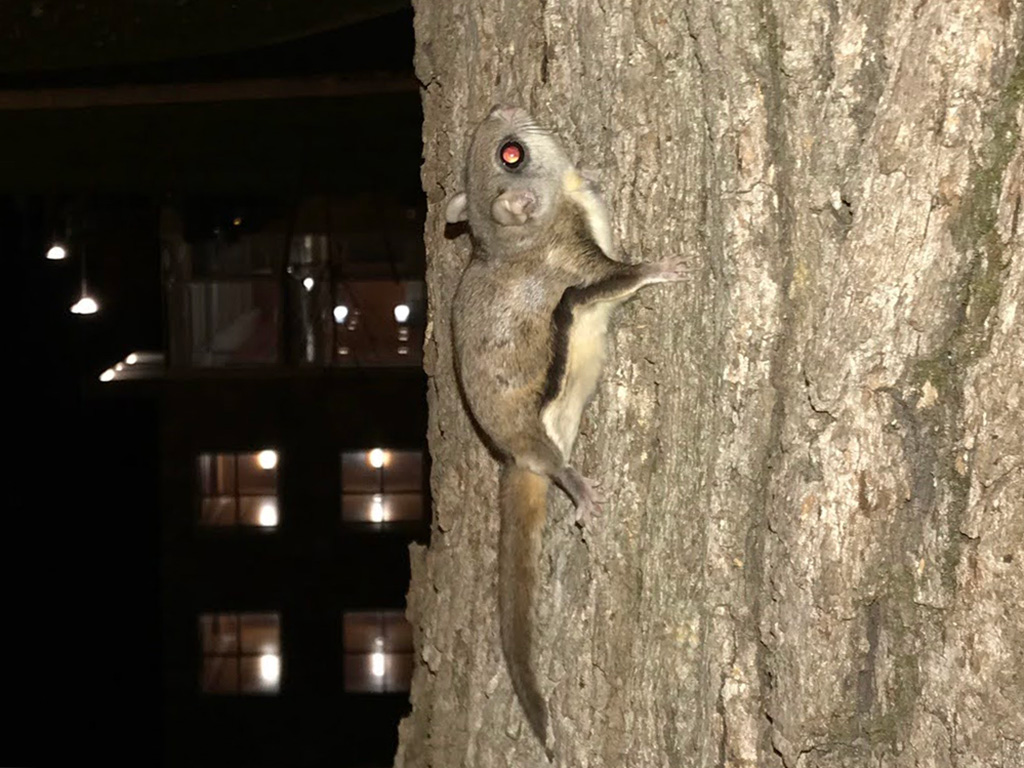 If you have an ultraviolet flashlight (and who doesn’t?), these squirrels glow vivid pink when you shine UV light on them. They are one of only two known mammals that fluoresce – the other being the opossum, which fluoresces blue. Opossums and flying squirrels are not closely related: They have very different diets, and live in different ecosystems. But they are both nocturnal species, so their fluorescing abilities might have something to do with being spotted at night. Other explanations include camouflage, since lichens that grow on trees fluoresce, and the squirrels may be trying to blend in. Some owls fluoresce pink on their undersides too, and squirrels may be trying to signal to potential predators to stay away because they might be owls. 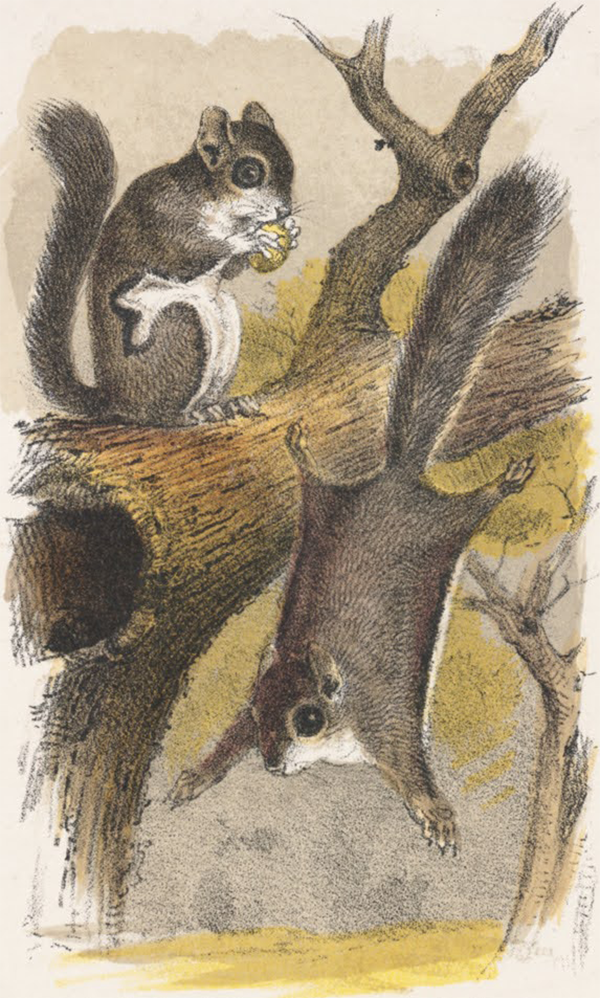 The pink fluorescing of flying squirrels is a recent discovery. In 2019, a scientist in Wisconsin was using an ultraviolet light to examine lichens and other plants that fluoresce at night. When he heard a flying squirrel chirp at a nearby bird feeder, he shined his flashlight on it and was stunned when it glowed pink. Examining with ultraviolet light the fur of other flying squirrels in museums, lo and behold! They almost all fluoresced pink. It didn’t matter if they were from the 1800s or the 2000s, male or female, Central American or Canadian. Their fur all glowed bright pink.

Ultraviolet vision is important for nocturnal animals because low-light conditions are rich in UV. It is possible that other twilight and nocturnal animals also fluoresce, and humans are simply unaware of this aspect of animal communication and perception. 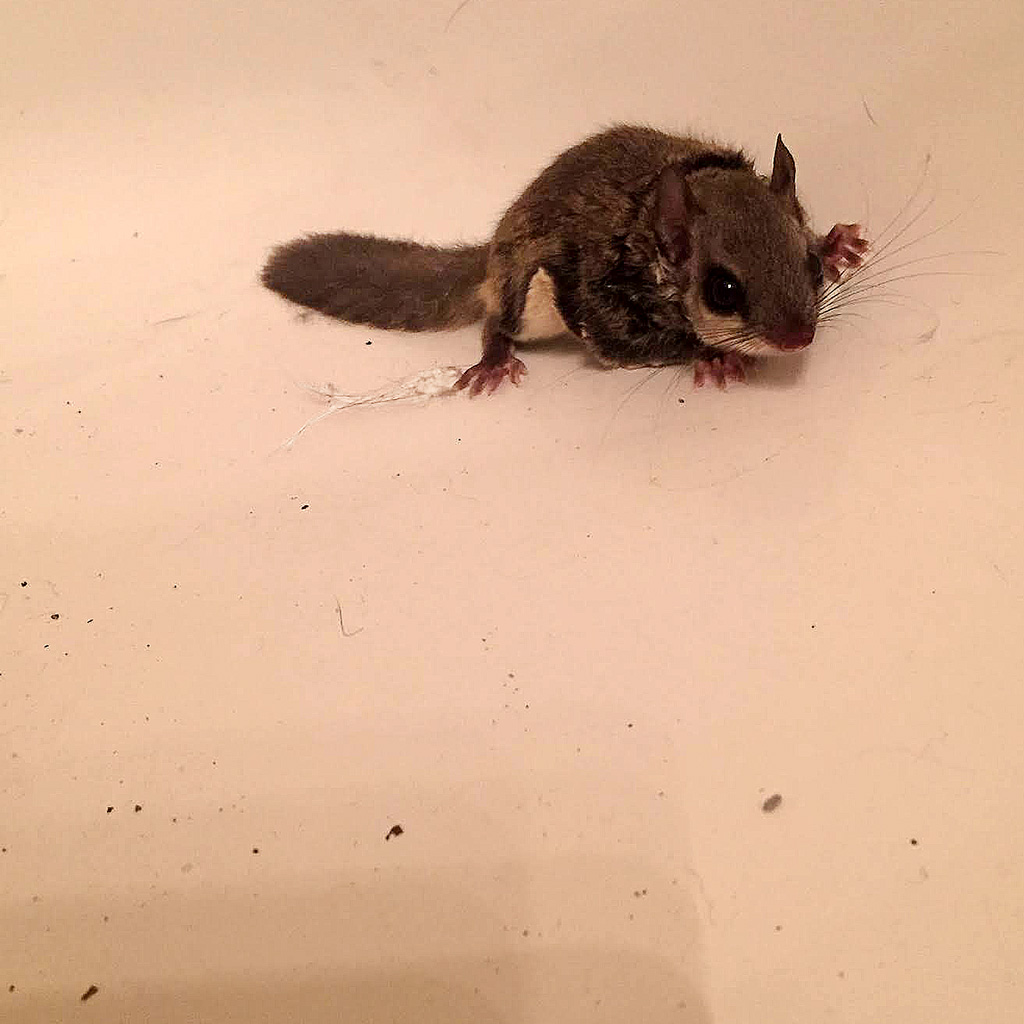 A southern flying squirrel. Because flying squirrels are nocturnal, they are not well studied. In fact, in 2017, a new species of flying squirrel was discovered in California. (Photo: NCBioTeacher via Wikimedia Commons)

Despite their name, flying squirrels do not fly. They launch themselves from a branch, spread out their limbs, and glide between trees by catching air in a hairy flap of skin that extends between wrist and ankle like a kind of parachute. They can glide up to 150 feet between trees, adjusting their limbs and tail to maneuver and even change direction. The squirrels usually land face up on tree trunks, with the tail acting as a brake and all four legs absorbing the impact. Flying squirrels are not well adapted for walking, so they glide as much as possible, which is a quick method for moving from tree to tree. 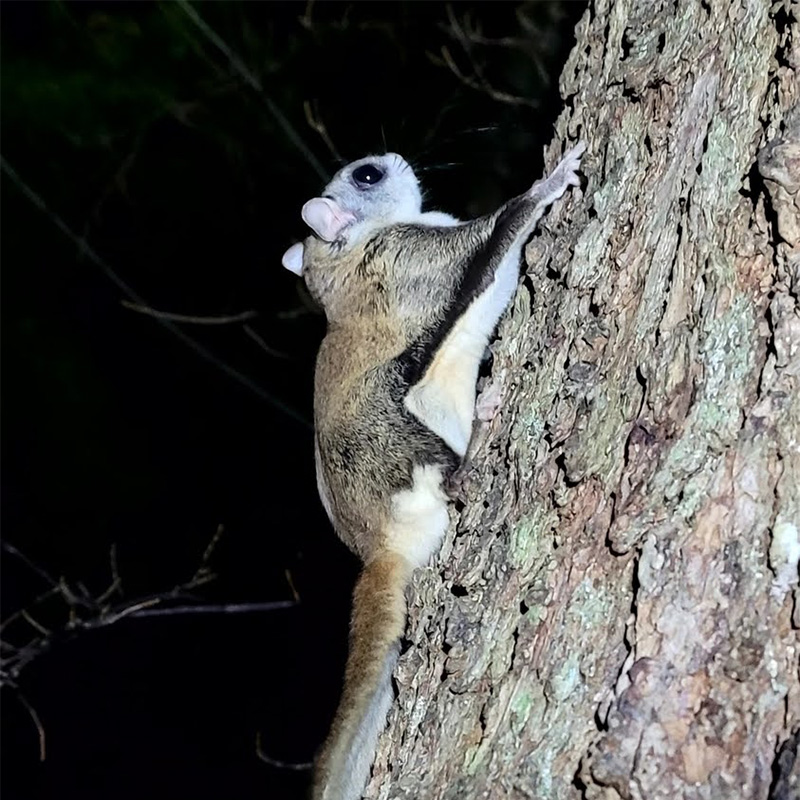 Flying squirrels don’t hibernate in winter, but they do slow their metabolism. To stay warm, they may nest with other flying squirrels or even screech owls and bats. This squirrel was found in Norwell. (Photo: Gilmang) 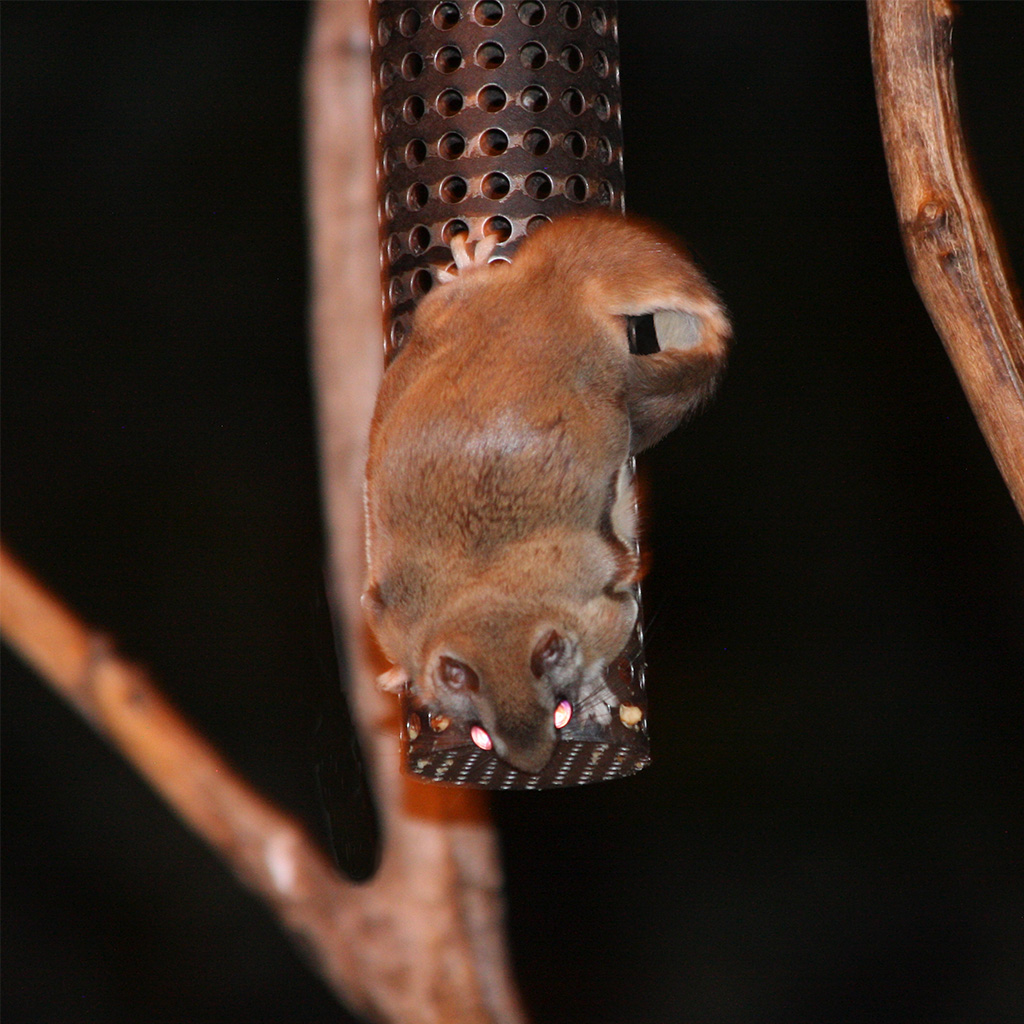 Spotting a flying squirrel on a bird feeder is one of the most common ways to see one. (Photo: LPC in Massachusetts, via Wikimedia Commons)

Walking beneath an oak tree in October or November, you have probably seen hundreds of pieces of acorn shells scattered at the base. The nutcracker is most likely a gray squirrel – flying squirrels make one opening in a nut shell to extract the meat, while other squirrels and chipmunks break the shell into many pieces to get the meat. 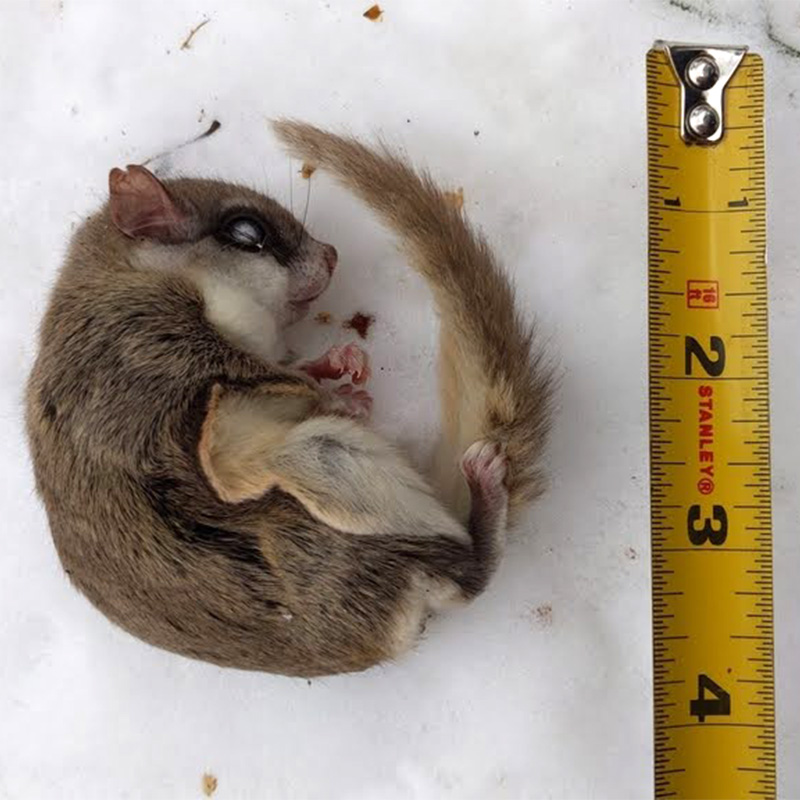 Flying squirrels were common pets in the 1700s and 1800s, and they were sold in markets because they were friendly and easy to care for. Over time, dogs and cats became more popular pets than squirrels. These days, Instagram is flush with photos of flying squirrels (for those of you who need a cute squirrel fix).

Although I have never seen one, I know there are flying squirrels in Cambridge because of photo evidence on the iNaturalist website and what I have read. Get a UV flashlight and see if you can spot one next time you are out at night. 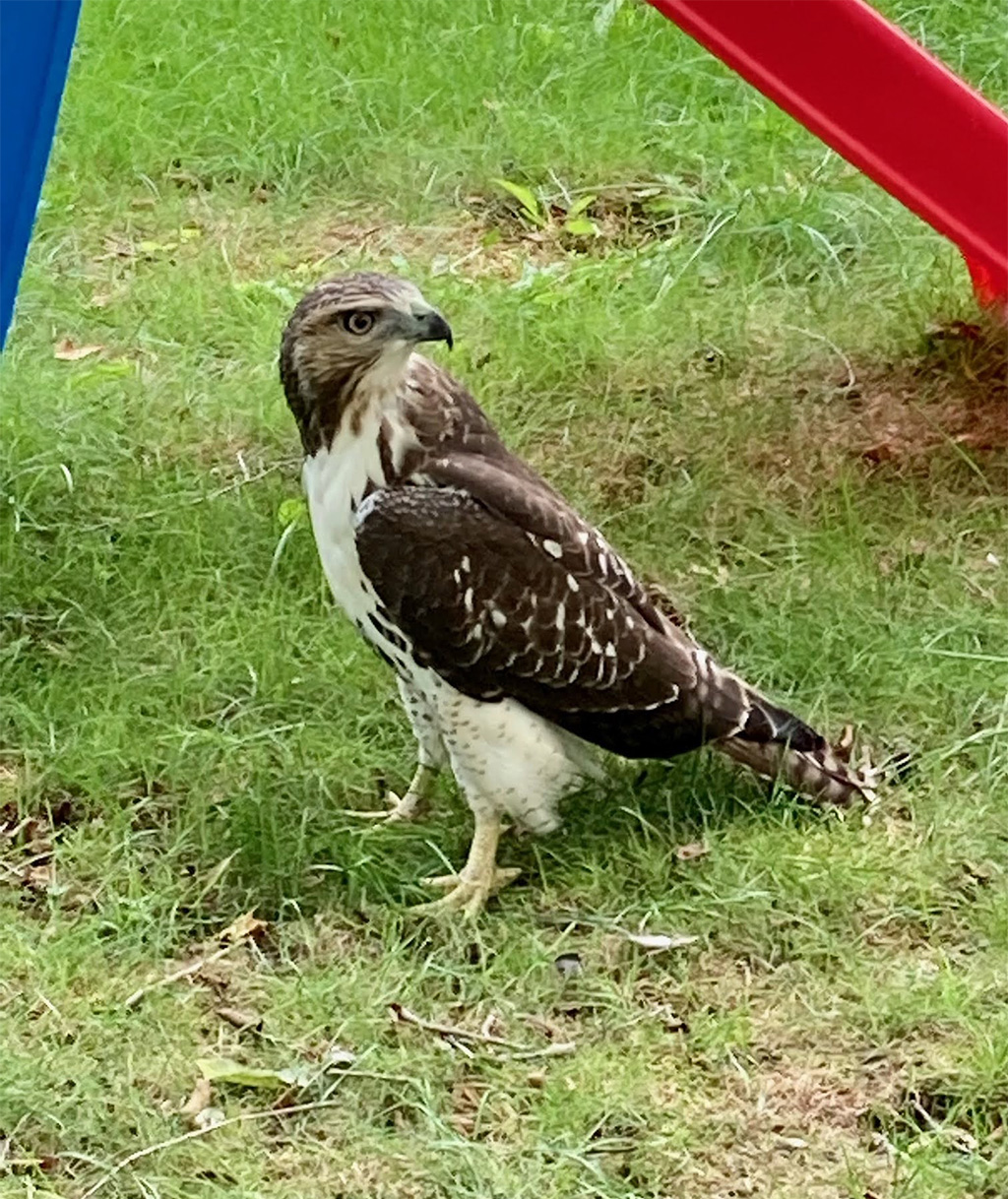 Reader P.G. Thomas sends us this photo of a juvenile red-tailed hawk photographed in Quincy.