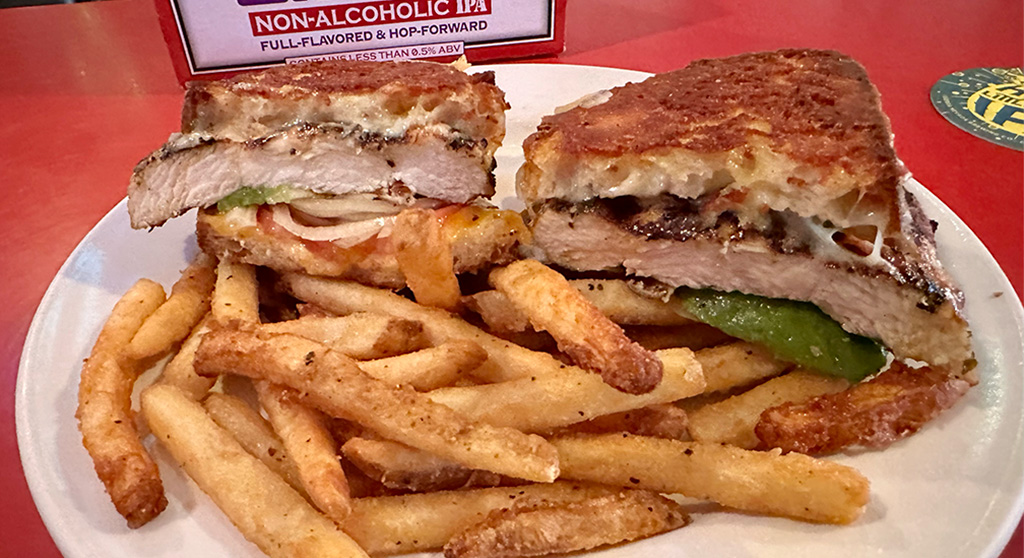 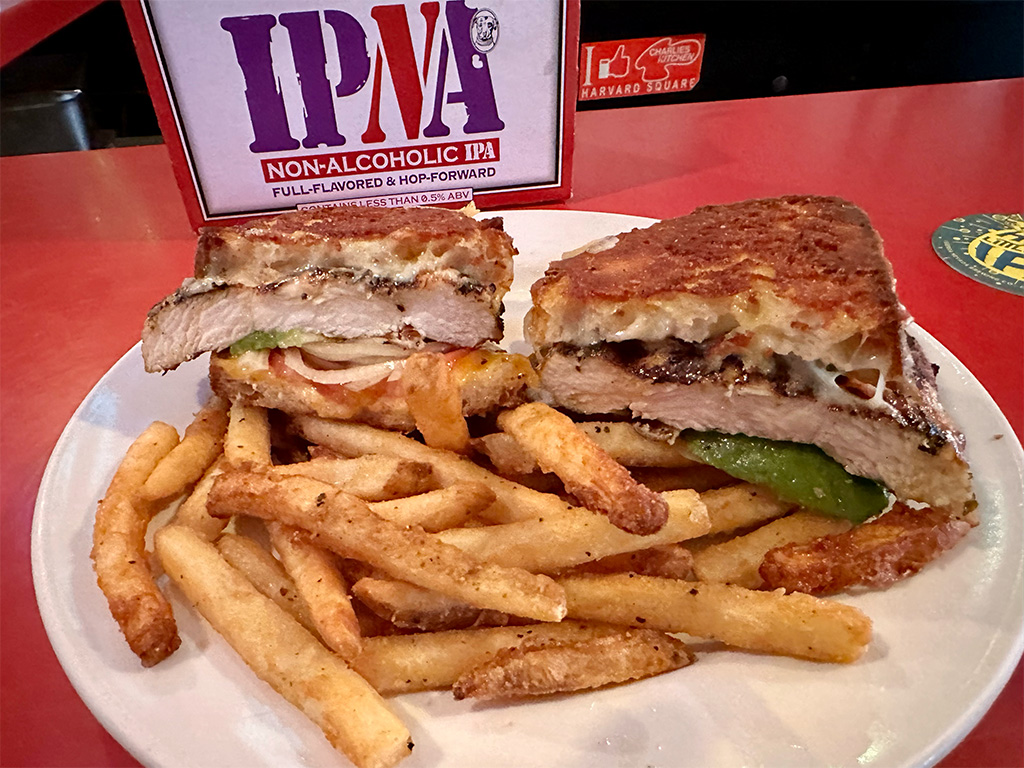 Lots has changed in Harvard Square, and many will look at the big-dollar building sales, ever-growing battery of bank fronts and departure of old friends and tell you it’s not like it was. But there are the constants that tend to slip folks’ minds. On that surprisingly long list there’s Harvest, Pinocchio’s, Shay’s, Grendel’s Den, the Hong Kong, Mr. Bartley’s Burger Cottage – most of which we’ve written about here – and the elder statesman of the pack, Charlie’s Kitchen. It opened in the 1950s and hasn’t changed much along the way, while being pretty much everything to everybody. Want to drink a beer outside on a hot summer day and watch a Sox game? It’s got a beer garden with 24 brews on tap, a notable addition a decade ago. Want to listen to live punk music, play trivia or take a warbling try at karaoke? It’s got that going on at the upstairs bar, which is open till late. Charlie’s is also not a bad place for a bite. It’s basic, essential bar food, but good basic, essential bar food.

Going into Charlie’s for the first time and drinking in the general ambiance of linoleum-tiled floors, spinning bar stools and red-upholstered booths, it may feel retro; given its vintage, there’s nothing retro about Charlie’s – it’s the real deal. Gone are the lobster tanks at the front, and the offerings overall seem a bit slimmer, and new to the room are signs and materials warning patrons about drinking safe, a response to roofie spikings in the area. But you can still get twin lobster roll and double-cheeseburger specials (though I guess they’re not really special if they’re on the regular menu).

One menu section that seems more pronounced or new since Covid is an “Ultimate Grilled Cheese” selection, which is made with Iggy’s bread that’s thick but light, coming off the griddle golden brown and never greasy.

I’ve tried almost all the varieties: the basic, the basic with avocado, the lobster version and the grilled chicken and avocado spin. All versions come with onions and tomatoes in the mix, save for the lobster – which is good, but if you’re going to have lobster between two slices of toast, go to Alive & Kicking Lobster in Riverside and thank me later. I like the basic, because to me you’re not eating grilled cheese unless there is mustard in the mix, and blessedly Charlie’s has brown and yellow mustards. But you just don’t put mustard on lobster or chicken. (Okay, maybe honey mustard). 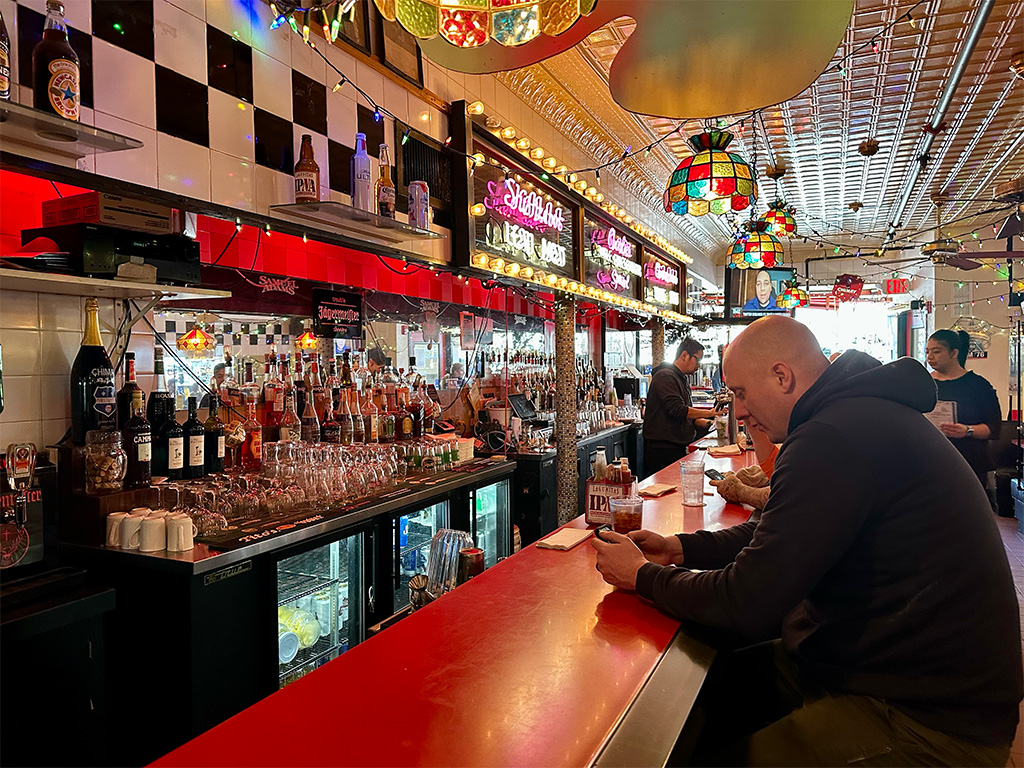 These griddle-made sandwiches are not as filling as they appear, so for a side might I steer you to the salt-and-cracked-pepper french fries? They’re slightly bigger than your typical bar fry but not as big as a steak wedge, though like the wedge they are fluffy and moist on the inside while crisp and well-seasoned on the outside. They key flavor component is the salt-and-pepper seasoning, tasting like you might find in a Chinese recipe for lightly battered salt-and-pepper shrimp. It’s a fry worth coming back for. (You can do onion rings too.)

Aside from grilled cheese, one of my favorite eats at Charlie’s is the chicken kebab and veggies with rice pilaf. The open-flame grill adds a subtle charcoal smokiness to the meat. But that grill still probably works hardest filling orders from a slate of burgers – Charlie’s is a burger-and-beer place, with so many that two come on brioche buns: a classic cheddar, and a Chef’s Favourite with grilled onions, crisp bacon, cheese and a mayo and ketchup mix. And those more plant-based can get a homemade black bean cheeseburger or a Beyond burger in any style.

That’s just Charlie’s being flexible to a crowd of students, constriction workers, young professionals and families that is probably the most diverse cross-section of humans in an ever-changing square.