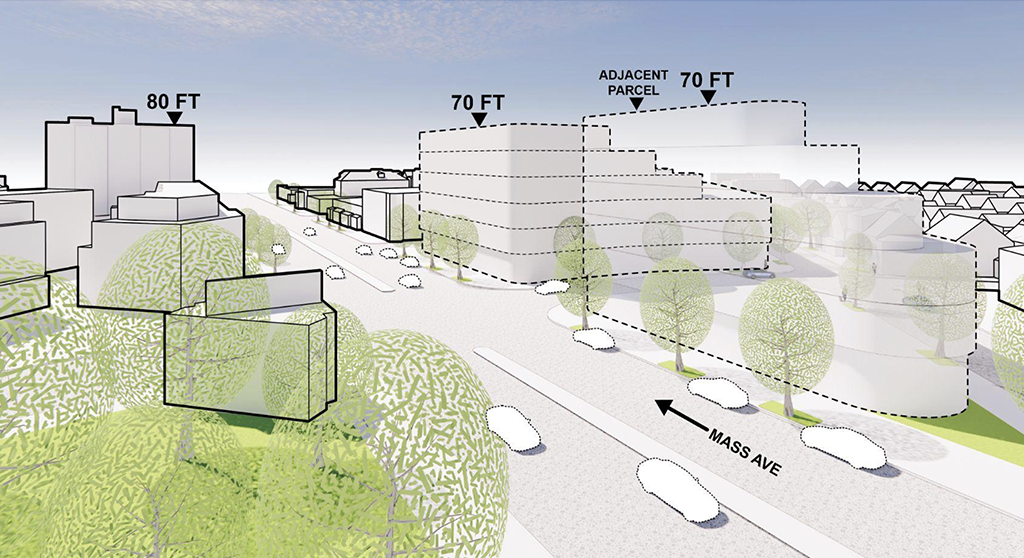 A rendering shows massing only, not design, of changes to zoning proposed at 2400 Massachusetts Ave. and a neighboring block in North Cambridge. (Image: North Cambridge Partners LLC via the Cambridge Planning Board)

A condominium tower proposed for North Cambridge was rejected soundly Tuesday by the Planning Board, who told developers of the two-block parcel to wait for a city zoning process rather than try to get ahead of it.

“This is the wrong process for this particular parcel,” board member H Theodore Cohen said. “I am somewhat conflicted because we’ve been talking about the need for housing and affordable housing, and personally I would like to see the whole Mass. Avenue corridor have much higher density and heights. But what those are should come out of proper planning and proper discussion.”

A 7-0 vote followed shortly afterward to send a negative recommendation to the City Council, which can still go ahead and approve the petition.

The proposal to reshape two blocks in North Cambridge – a triangle formed by Massachusetts Avenue, Cedar Street and Alberta Terrace – arrived Oct. 31 before the council and was referred automatically to the council’s Ordinance Committee and the board. The zoning, presented by developer Patrick Barrett for Tim Rowe and Dan Sibor’s North Cambridge Partners LLC, would allow for a 2400 Massachusetts Ave. tower of condos of up to 80 feet with retail at their base. The current zoning allows 35 feet of height, and includes single-story businesses on the neighboring block such as the Cambridge House of Pizza and Friendly Corner minimart.

The petition arrived just 28 days after city councillors passed a policy order asking the Community Development Department to form a working group by June 15 to come up with new zoning recommendations for Massachusetts Avenue from Harvard Square to the Arlington border.

“There is a pressing need for a long-term planning process to encourage the creation of more housing, improve transportation, support for retail and commercial growth,” councillor Paul Toner said in the order – which was pulled from debate long enough to add language ensuring the work doesn’t interfere with projects already under development.

That didn’t cover what was under consideration Tuesday by the Planning Board, though, which drew more than a dozen letters of opposition (including a petition) and around the same number of opposing speakers before getting to reaction from the board.

Neighbors to the site were upset by the proposal’s scale, questions of timing around the holiday presentation and the appropriateness of the approach. Several called it “illegal spot zoning” – unless there was a community-benefits package that made it “contract zoning” – and one said it should rightfully go to the city’s Board of Zoning Appeal for a variance, not to the Planning Board. A couple of speakers said they questioned whether the project would wind up being housing at all, or turn into a hotel or lab building. (Planning Board associate member Ashley Tan agreed that this presented a problem, as a project with a public benefit gets around spot-zoning restrictions, but “there’s no guarantee [this] will be housing” and fulfill that need.)

There was not, however, blanket opposition to seeing the parcels redeveloped.

“We’ve been looking at this site for decades, and the only improvement over the last 20 years that I can think of was that barbed wire was removed from the chain-link fence,” said Vincent Pafumi, a Harrington Road resident. “So something that was done in a thoughtful and respectful manner would be welcome.”

Board members also wanted to see a proposal come back after the North Massachusetts Avenue working group had its process, though there were other, sharper critiques that included a belief that the proposed height and density were excessive.

“The 80-foot height I think would be better at 60. And as for the process, it seems like the process that you’ve gone through so far has just alienated all your neighbors,” said board member Lou Bacci, while member Hugh Russell called the proposal “a huge change – and I’m not surprised nobody who testified or us thinks it’s a good idea.”

Vice chair Mary Flynn, running the meeting, called that a bit of an exaggeration, but said she otherwise didn’t disagree with her fellow members’ comments. Her summation of the board’s position was that a planning process for the City Council’s requested North Massachusetts Avenue study “be the vehicle through which the planning for this particular site is is done, [with] the neighbors being involved in that process.”

“And hopefully we will see another project for this site, hopefully with housing,” Flynn said.

The proposal appears next before the Ordinance Committee on Jan. 3. Before that, “we have a lot more outreach to do with the neighborhood,” Barrett said earlier in the evening.