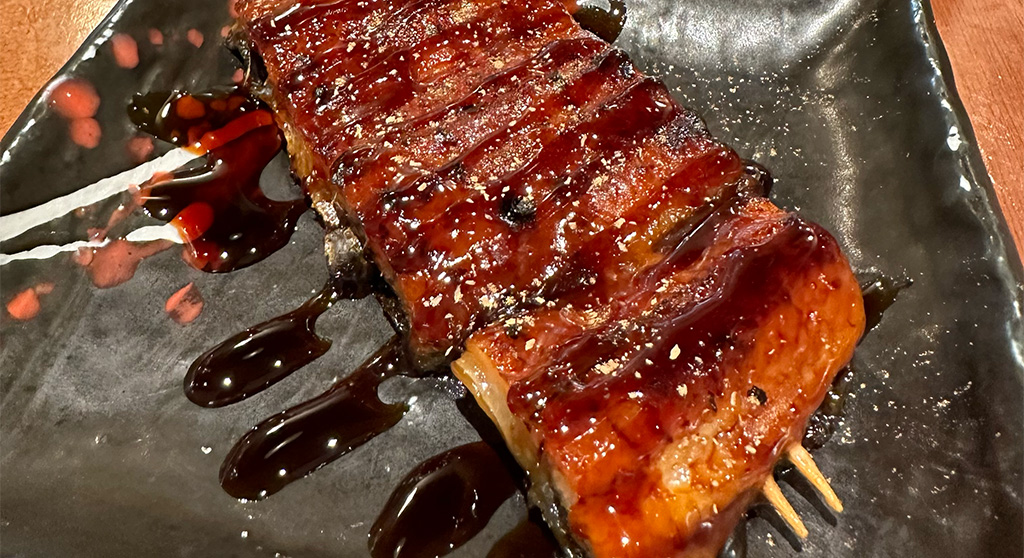 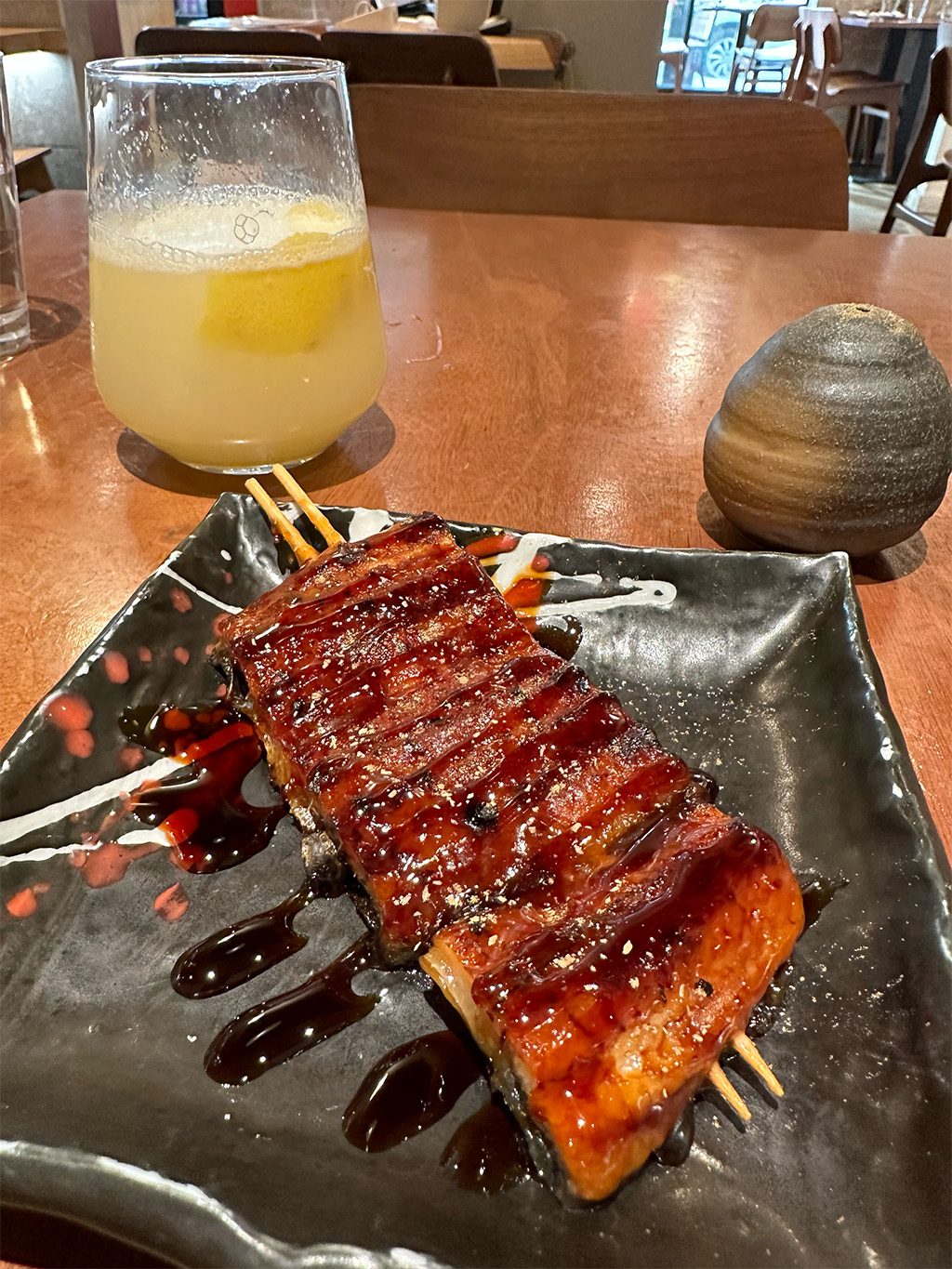 A skewer at Yakitori Totto in Somerville. (Photo: Tom Meek)

Assembly Row is polarizing. The sprawling urban super mall just across the Mystic from the Encore Casino feels commercial and big box, being full of retail and dining franchises. Even local accents such as Legal Sea Food and The Smoke Shop BBQ are “chains” – and there’s nothing wrong in that; there’s actually a degree of comfort in being able to enjoy the same reliable, good nosh in Back Bay, the Seaport or Assembly Row.

That said, Assembly Row does have some unique feeding fare: Zo Greek and Salt + Stone (on my list to try) are local. Yakitori Totto, while not local, is the only sister restaurant to one in New York City that has a reputation for posh clientele.

Have no fear, there’s nothing criminally posh about sister Somerville: It’s a spare yet cozy Japanese cafe specializing in yakitori and boasting a distinct, late-night izakaya vibe. (I went there for lunch, so there was little “late-night” about my visit except maybe my beverage, but more on that later.)

The daytime menu is geared toward basic sets of salmon teriyaki, yakitori and sushi dons (rice bowls) as well as an udon offering or two, but you can nosh off the main menu as well. Yakitori are small bites grilled on skewers, so there’s some fun in building a plate to the yen of your palate of the moment, similar to ordering sushi. On the appetizer menu there’s a dashi maki tamago, a light and silky rolled Japanese omelet. I’m a big omelet fan, and this preparation is one that will have me coming back. Others on the precursor menu contain Japanese comfort staples such as agedashi tofu (tempura-fried in a savory broth), jidori karaage (fried chicken thigh) and gyoza (dumplings) and some unique eye-grabbers including marinated quail eggs and the tori dango (simmered chicken meatballs covered in rice, which take at least 15 minutes to prepare). 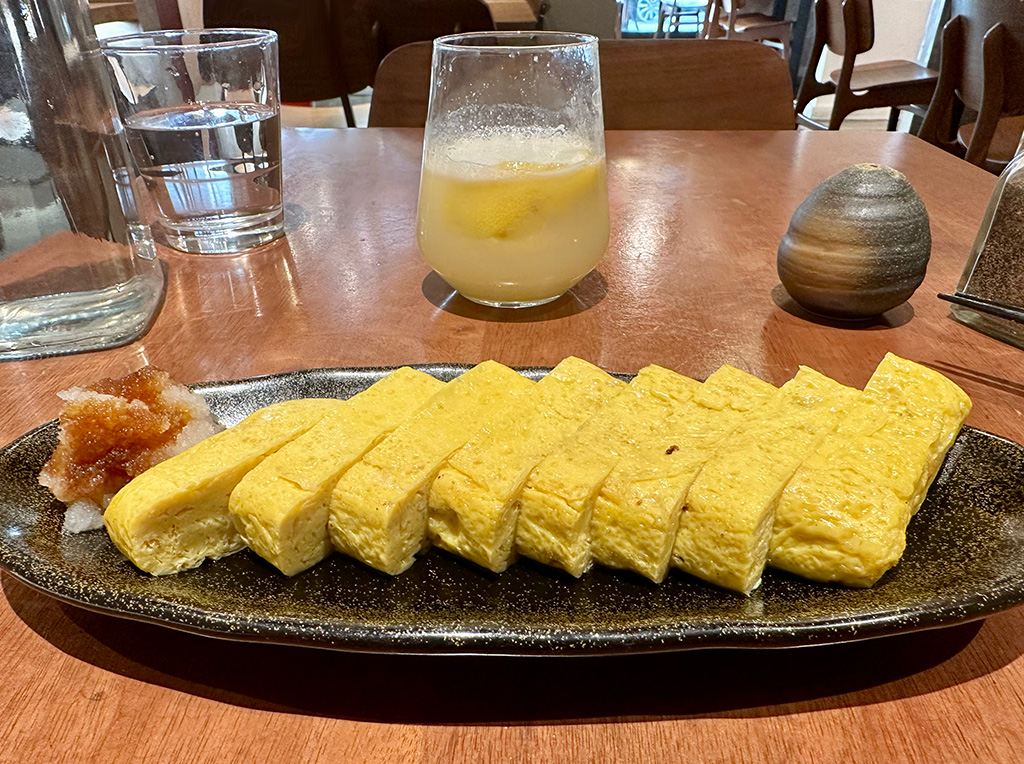 The dashi maki tamago at Yakitori Totto with a Boys are Dumb cocktail. (Photo: Tom Meek)

This is a yakitori place, though, and yakitori is what one should have. Because it was lunch, I ordered only two skewers to go with my omelet: unagi, delicious barbecued eel served warm and with just the right amount of sauce, and ebi, a giant tiger prawn that was like a mini lobster tail – succulent, but you do have to wrangle the shell off. It’s a worthwhile tradeoff, because the shell maintains that succulence when on the open grill. The yakitori menu here is very chicken-focused, and I don’t think there is any cut or part of the bird you can’t get on a skewer. As you can expect, there’s breast and thigh meat, but you can also get the neck, the heart and even the knee bone. On the vast skewer menu you can get pork, urchin, mushrooms and other veggies, a lamb chop and, natch, wagyu beef.

Now about that “late night” accent: The drink menu is peppered with humor and Toki whiskey. Some of the smirk-worthy cocktails are the I Hate You (gin and citrus juices) and the Lovely Loner (Toki and grapefruit), but the best is the Boys are Dumb (Toki and lemon juice with a whipped egg white), which I had, finding it frothy, light and delicious like an old-school egg cream soda. It’s the kind of righteous dumbing down that’s easy to get behind.