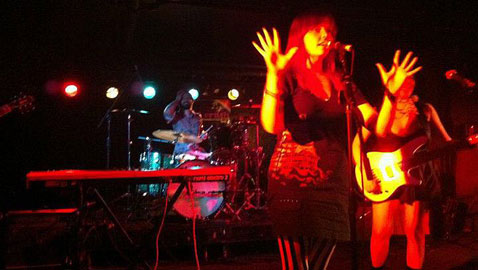 Officially, the dozen performers and artists burned out of their Central Square apartments are the beneficiaries of a flurry of benefit shows scheduled for the coming weeks. But fans of local music and comedy make out as well.

During the fire-inspired Union Square Festival scheduled for Sept. 9, for instance, a full two dozen bands are set to play at three venues, and an all-day, all-access pass is $10.

The three-alarm fire was reported at 3:33 a.m. Aug. 23 at 95 Columbia St., a building called “Columbia House” or “The Danger Zone” by residents such as Brendan Burns of SchoolTree, Tony Leva of Jaggery and Mary Bichner, of the Flying Blue Squirrels. The fire persisted for hours, ultimately causing the complete removal of the top story of the building. It left many of the residents lacking almost all of their belongings and looking for long-term housing in a time of year with dauntingly low housing turnover. (Burns has an insider’s description of a fire and fire response, with photos, here.)

A site bringing together information on the recovery has a fundraising button to raise $5,490 though Dec. 1.

The calendar so far

In the meantime, several events are scheduled, with two “Help! Our Bands Are on Fire!” benefits being the most prominent so far, starting with the Union Square Festival and followed Sept. 13 by a show headlined by Walter Sickert & the Army of Broken Toys,with openers Satellites Fall and Do Not Forsake Me Oh My Darling, as well as Avoxblue, Creaturos, Molly Zenobia and Burns, who lived at Columbia House. The show, at the Middle East Downstairs, starts at 8 p.m. and also costs $10, with all money said to be going to “the house people.”

The events begin Thursday with The Gibson/Antonellis Comedy Hour — actually a full two hours, but the producers say “all good comedy is based in lies” — in which Julee Antonellis and Jill “Petey” Gibson end a six-year collaboration before Gibson leaves for Los Angeles with stand-up, sketch and songs. The show is at 8 p.m. at the Davis Square Theatre, 255 Elm St., Somerville, with tickets costing $20 and a portion going to the Columbia House people.

There’s a Brookline Music School 95 Columbia Benefit Concert from 1 to 8 p.m. Sept. 8 at 25 Kennard Road, Brookline. Burns is the guitar department coordinator at the school, where he oversees Guitober, an annual monthlong celebration of guitar.

The five-hour Dark Angels: Cambridge Fire Fundraiser Event starts at 9 p.m. Sept. 14 at Flat Top Johnny’s, 1 Kendall Square, and has four DJs and three burlesque artists performing among the pool tables. DJ Chris Ewen (of Xmortis and Heroes); DJ Static (of Ceremony and Factory); DJ ArcRunner (of Sin-O-Matic and Excess); DJ Kuro (of The Attic) will be spinning, and Miz Fonda Feeling, Karen Webb and Devilicia will be dancing. There will be a raffle with prizes from local artists and a donation area. Entry is a suggested donation of $5 or $10, with all proceeds at the 21-plus going to charity.

More events are likely to be added to this calendar. 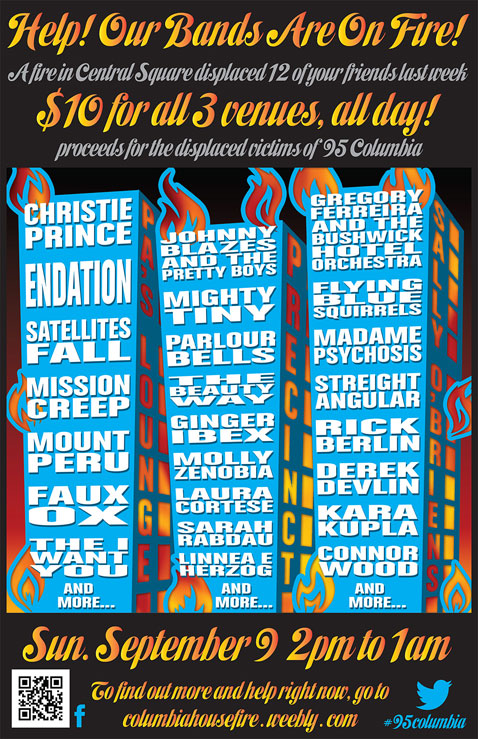