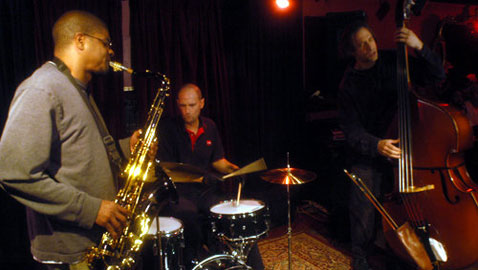 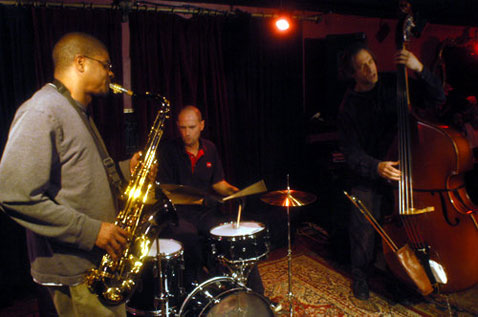 The Jeff Robinson Trio, with Robinson on sax, performs at the Lizard Lounge Poetry Jam. The event’s 16th anniversary is Sunday.

Every Lizard Lounge Poetry Jam is impressive: Eight poets compete for the night and ultimately  to be on a slam team that can go to a national tournament. There’s an open mic segment with still more poets. And there’s a featured poet who performs backed by the improvised jazz of host Jeff Robinson and The Jeff Robinson Trio. The poetry is often blow-your-hair back powerful, and the Lounge is often packed to capacity and turning people away.

For poetry. On a Sunday.

In fact, this Sunday’s Poetry Jam is the 16th anniversary of the event, and Robinson has found a way to turn up its power yet again: He says he’s bringing in 16 musicians and 16 poets to mark the occasion, even though the Lounge itself won’t be able to pack in any more people than the usual sold-out night.

“The numbers have pretty much been the same over the years, which is fairly impressive, I would say, because we’ve been there nearly 16 years and we’ve always had a good audience,” Robinson said recently. “And some people who’ve been coming for years continue to come. There’s one person there last night who was one of the people there 16 years ago, and she continues to come.”

Having been so involved with the event over the years, from its origins back at The Middle East in Central Square, Robinson said it’s hard to see the changes – “like when your kid grows and you know he’s taller, you just never really saw him grow” – but he suspects there’s been improvement even as he’s kept the event’s structure and his management of it the same.

“When I’m performing with the poets, once the poem’s over I’m concentrating on the next one and practically forget the one that just happened. So a lot of this stuff meshes together for me,” he said.

Simone Beaubien, slam master of the weekly Boston Poetry Slam and organizer for the National Poetry Slam for 2011 and this year, can confirm that.

“I’ve been fortunate enough to be pretty regular at the Lizard Lounge since about ’98 or ’99, which is before they held the slam and was — I hesitate to say ‘only’ — only an open mic with a featured poet with the music behind, and that was my experience there — the musicality and the rhythm and the late Sunday night red-lit heavy smoking venue of that time is the way I think of the Lizard Lounge when it began,” Beaubien said. “There’s a continuous evolution depending on the poets who are in the space at the time. I would hesitate to say it’s linear or going up; I would say it’s always moving.”

Back in Central Square is the Cantab Lounge, where Beaubien’s Wednesday night Boston Poetry Slam celebrated its 20th anniversary in October. The night is also regularly packed, benefiting from being 18-plus, meaning the audience skews younger than Lounge can with its 21-plus age limit. “It’s not completely different, because we both deal with poetry, but there are a couple of factors that make us different … We have a band and everything and they don’t. They deal with some great poets over there, and Simone’s a great poet and a great organizer. I have nothing but respect for what they do over there,” Robinson said.

But both nights share a factor in their popularity and longevity. “We’re fortunate in this part of the country to have all these schools. Every year new people come here. Whether they stay is something else, but they come looking for an education, and we will probably be able to sustain a poetry scene up here for a long time because of that,” he said.

Beaubien’s ability to take on the National Poetry Slam – for which he is contributing his knowledge of the area’s musicians, bars and nightclubs in finding venues – is another factor he credits for poetry’s popularity in Cambridge, Somerville and Boston.

“That’s definitely going to be a great thing for the poetry scene here. That brings a lot of attention to local poets and the people who support it,” he said.

He’d like to leverage that to add more music to the scene, much like what he does every Sunday with his night’s featured poets and Blake Newman and Jerome Deupree, the other members of his trio. “I’m such a fan of music and poetry I would love to see that continue to build and get stronger, this being a good music town as well. I have a few projects in the future I’m hoping will help that happen,” he said.

Berklee graduate Robinson is also active in radio, where he had a “Poetry Jam” show on WMBR 88.1 FM and streamed online, and theater, most recently as an actor in “The Meeting,” in which Martin Luther King Jr. and Malcolm X meet. His one-man show about Charlie “Bird” Parker, “Live Bird,” won the appreciation of Doris Parker, the saxophonist’s widow. In addition to the trio’s Sunday residency, he performs every Monday at Sally O’Brien’s in Somerville with the admired Bob Marley tribute band Duppy Conquerors.

One thing that will not change at the Poetry Jam: the $5 cost of admission, which has been the same almost from the start, 16 years ago.

“It was $3 for maybe two weeks – to the point where I don’t actually remember that it was $3. Now’s not a good time to raise the price, considering people are out of work and the economy is not great. This would probably be the worst time to raise up the door price,” Robinson said. “And it’s a nice, round number. It’s easy to do the math at $5, and we’re not paying the rent with this. We make some money and spread it around and it’s a fun thing to do on a Sunday night.”

“It’s going to stay like that for a long time,” Robinson said.