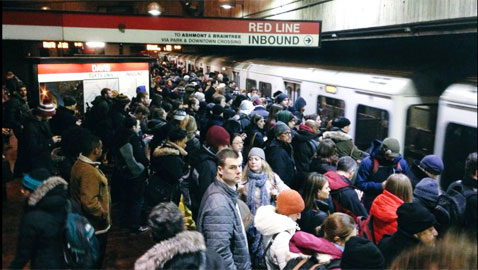 ALERT: Avoid the #MBTA Red line. This is the scene inside Davis. #BOSnow pic.twitter.com/qPc5kscXsQ

This brought predictable responses, such as:

Not so long ago, trains would stop for long periods with no information for the people stuck inside – then, with weird consistency, an announcement explaining the delay would come just before the train started rolling again. This was the era also of zero information about when a train would arrive at a station.

Now arrival times are available on a slew of mobile apps and constantly updated digital signs on most train platforms, and the T has clearly switched policy to give more frequent updates about delays. As in: Every few minutes announcements tell riders stuck inside a stalled train that the train is stalled – maybe because there’s a disabled train ahead or some other problem. Sometimes there are so many pointless updates it seems like the conductors are CNN after deciding to go 24-hours-a-day on a downed plane or missing blonde vacationer.

The executives in charge of the MBTA – Frank DePaola, acting secretary of the state Department of Transportation, and Beverly A. Scott, chief executive and general manager who sadly puts her doctorate next to her name on her bio page – haven’t figured this out, and somehow they seriously miscalculated how their trains would fare in the storm despite the MBTA having operated in Boston in some form since 1897, with winter and snow already sort of a thing in the region.

Bad enough they opted to run business as usual and were slow to get shuttle buses out even as riders waited for hours on freezing, exposed platforms. But even with 118 years of institutional knowledge the weather can still take a system by surprise. Boston just had its snowiest week in history.

Here’s what’s unforgivable: With 23,199 weekday station entries and transfers and 15 bus lines connecting through it, Harvard Station is the third-busiest in the entire train system, according to the MBTA’s July statistics. And yet the experts at the MBTA, led by DePaola and Scott, abandoned it to be run for several daytime hours by a single employee on his first day of work.

Trains stalled and were taken out of service, machines broke down and stranded commuters and confused tourists needed information and advice – and there was none to be had. The MBTA failed big, and of course it didn’t go unnoticed:

@MBTA The confusion of the operators on the red line shuttles is inexcusable. It took over 2 hours to get from Quincy Adams to JFK.

There was a bigger conclusion to be drawn as well:

Seriously @MBTA? You have ONE job! I'd love for the Olympics to come here but you guys can't even handle regular life! It's heartbreaking.

If you think boston is ready for the Olympics, consider the lack of @MBTA performance these last two weeks.

The MBTA is suffering severe delays. It is recommended you seek alterative legislators.