With giant housing rehab going on, thoughts return to building atop parking lots 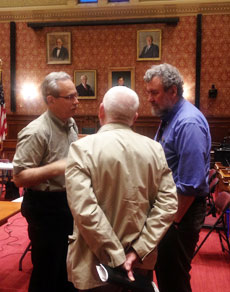 With giant housing rehab going on, thoughts return to building atop parking lots

Even with news that there may be 21 percent fewer people than thought on a wait list for affordable housing, city officials built a case Monday for turning Cambridge-owned parking lots in Central Square into housing.

Because current residents need to be relocated during about construction, there would be no affordable housing available for those on the wait list – until recent attempts at direct contact, estimated to be 9,500 people strong. While 250 of waiting individuals and families would get rental assistance vouchers to get off the list, using those vouchers would almost certainly take them to housing outside Cambridge and lose them their local priority (unless they also work in Cambridge or are a military veteran), housing officials confirmed.

By getting off a years-long waiting list, they would likely be giving up on living in Cambridge.

“There are people who are being displaced because we’re trying to do a good thing, which is update their facilities,” said councillor Simmons, head of the council’s Housing Committee. “We could lose those people … how do we hold onto those 250 residents whose children could be going to school here or have had a long history in Cambridge?”

“Given all the circumstances you describe, and you could say we’re in a brutal housing crisis right now, how important is it for us as a city to build more housing?” Benzan asked assembled experts from the Housing Authority and nonprofits Just-A-Start and Homeowners Rehab Inc.

He described it as a “hard question.” But not only did it draw a universally favorable response at the meeting – it was embraced as an option citywide two years ago. It was discussed favorably by councillors in February 2013; pitched the next month as part of the so-called C2 zoning to be presented to the City Council by the Community Development Department before that summer; was advocated by the Cambridge Residents Alliance group that September; and given a model in the private 10 Essex housing project, with underground parking (albeit for fewer cars) and ground-floor retail, seen that December. Councillors including Benzan and Dennis Carlone raised it as an issue last year, and just last month a resident wondered at the often “completely empty, totally useless-to-the-neighborhood” lots persisting around her Central Square home during debate about a 19-story tower proposed for nearby.

“I think it is incredibly important to build more housing,” said Peter Daly, executive director of HRI. “The parking lots are something we should definitely be looking at, because there’s the ability to develop that housing at a much lower cost than if we went out and purchased something [that could also] take much longer.”

City Manager Richard C. Rossi agreed. “What we’re finding now is that the acquisition of property is just way too expensive,” he said. “We really should consider building units on any city-owned lots, and not just rule them out until we’ve had time to evaluate them.”

Partnering through investment even with for-profit developers made more sense than buying units in a development because “we’re just not competitive in the market,” Rossi said. “That would be a little bit of a change for us, but it would be a way to impact this market instead of dollars piling up and us waiting and waiting and waiting.”

While councillor Tim Toomey has been known as a critic of concentrating affordable housing in parts of the city including Central Square and East Cambridge, his comments Monday didn’t address that. He just asked to clarify that state-owned property in Cambridge would be included along with city-owned property in conversations about building housing. He had no particular property in mind, he said in a Wednesday email.

Benzan hoped to double Simmons’ target of 1,000 new units citywide, although focused around Central Square, with inclusionary units for people who were otherwise squeezed out of market-rate housing. Finding a “new stream of land could have a huge impact on what we’re trying to accomplish,” he said.

In that vein, councillor Marc McGovern had a further suggestion about how the city could be more “bold” in pursuing housing affordable to all: seizing stagnant land for the public good. “Somerville has taken a huge [amount] of square footage by eminent domain to build housing,” he noted. “We have Vail Court, we have the Tokyo site, we have other places we haven’t pursued. Those are lots that could be great for affordable housing, and they’re sitting there doing nothing.”

Until the Housing Authority’s 2,129-unit rehabilitation project (another 302 units at the Millers River project is pending federal approval), it was Cambridge lore that there were some 9,500 people languishing on the housing waiting list, with about 190 per year coming off as they found a home. Attempts to contact people on the list to see if they wanted vouchers drew responses suggesting the list was 21 percent smaller than thought, Deputy Executive Director Michael Johnston said.

But McGovern worried that the authority’s 10-day window for people to signal they wanted vouchers might be a too aggressive. Not everyone opens their mail immediately, and “there’s a lot of documentation” to gather leading up to a rigorous four- to six-week screening period, he said, urging also that the loss of local priority be re-examined or at least highlighted in letters to wait-listed people. “For some, that’ll  be a deal-breaker.”

Housing Authority officials had a couple of longer-term assurances to make:

The authority will act as property managers for the public units with no changes to staff or protections for tenants, which “turned out to be much harder than we anticipated,” especially since the rules of public housing technically don’t apply to these “Rental Assistance Demonstration” rehabilitation projects, authority Executive Director Greg Russ said. “We have established protections embedded in the deal.”

The result of the rehabs will be higher-standard housing than doesn’t have a “project” feel, Russ said, crediting his staff for fighting the U.S. Department of Housing and Urban Development on funding restrictions. “We’ve taken a lot of heat from HUD,” he said.

The rehabilitation would equal an investment of about $830 million over the next next three to five years, he said.